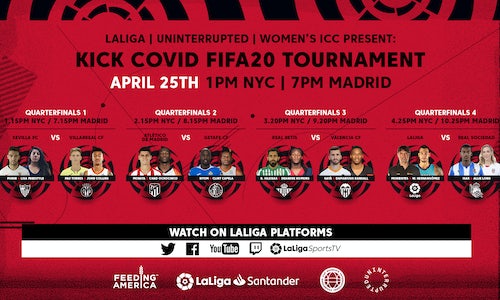 In the absence of LaLiga matches and other live sports, LaLiga set out to find ways to keep fans engaged and entertained during the early stages of the Covid-19 pandemic. After a month without LaLiga games, LaLiga North America came up with the idea of launching Kick Covid, an online charity FIFA 20 tournament. Tied to LaLiga’s values of inclusivity and the North American office’s goal of connecting with American sports fans, this was the first virtual event where current European and American top tier female and male athletes were competing against each other in FIFA.

The two-day virtual event put on by LaLiga North America in partnership with Uninterrupted and the Women’s International Champions Cup, brought together NBA, NFL, and USWNT/NWSL stars alongside LaLiga players. As all three brands pivoted their traditional marketing strategies to accommodate the ongoing health situation, they wanted to ensure that any initiatives launched would raise money to support in the fight against the pandemic. This led the group to team up with Feeding America to raise money for their Covid-19 Response Fund aimed to support people facing hunger and the food banks who help them.

The Kick Covid FIFA 20 Tournament was designed with the modern sports fan in mind as it merged the worlds of physical and digital sports in a time where entertainment seekers were desperate for content. Bringing recognizable sports figures from some of the world’s favorite leagues and having them play in an eSports setting appealed to fans that follow different sectors of the industry.

Hosted by a roster of well-known soccer commentators and influencers, the Kick Covid tournament offered behind the scenes interviews featuring players from both American and European leagues. The intimate, multilingual interviews offered a glimpse into each individual’s routine while quarantining and sparked budding friendships between players across continents while viewers turned in. This type of content is typically inaccessible to fans yet it was made available through this initiative, which appealed to modern sports fans who crave intimate access with their favorite sports stars.

The first-of-its-kind cross collaboration between European and American sports leagues, set a new standard for international fan engagement. The tournament also laid out a new playbook on how to grow awareness of foreign teams and their players in the U.S. By bringing in a variety of well-known American sports stars such as DeAndre Hopkins, Chad Ochocinco, and Allie Long, among others, LaLiga was able to reach sports fans who might not traditionally follow European soccer. Each U.S. athlete was paired up with a LaLiga player, which helped fans in the U.S. learn about each Spanish star and their respective clubs through intimate interviews alongside their American counterparts.

Additionally, the tournament was a model of inclusion featuring both female and male athletes with different native languages from all over the world. The tournament culminated in USWNT star Allie Long and her teammate Real Sociedad’s Alexander Isak (LaLiga) winning the championship. Long’s interviews and dominant play throughout the tournament sent a message of female empowerment to the sports community whose eSports tournaments have predominantly featured singled gender players from one respective league.

Over the course of the two-day virtual event, the Kick Covid Tournament generated over 8.8M video views and reached 30M people across multiple online platforms. Streamed across LaLiga’s global accounts, the tournament was also aired on TV by 50 of LaLiga’s broadcasters in 90+ countries. LaLiga’s social channels amplified coverage of the event with over 50 social media clips and highlights shared, garnering more than 28.7 million impressions. Coverage of the tournament was featured in over 60 outlets globally including top sports and sports business outlets in the U.S. such as SBJ, Forbes, ESPN, and UNDEFEATED. 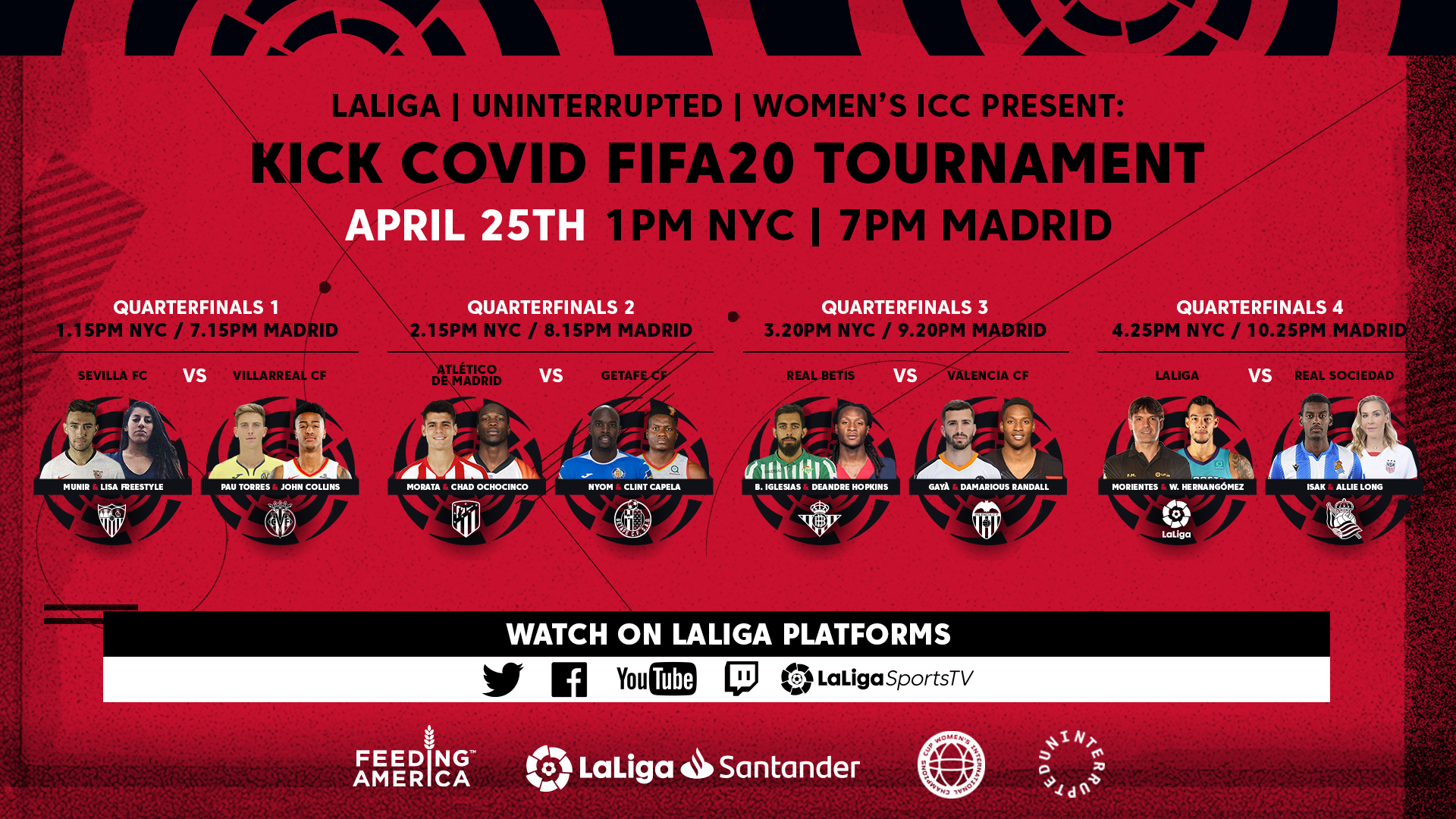