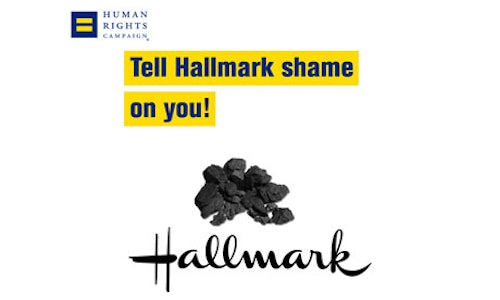 Seeing yourself and your identity represented on screen is incredibly important, and this could not be more true for LGBTQ people. In December 2019, as holiday- and winter-themed movies graced our televisions, people in the LGBTQ community were undoubtedly proud to see the Hallmark Channel run an ad from Zola that featured a same-sex couple on their wedding day.

Unfortunately, much to the dismay of tens of thousands of people, Hallmark responded to pressure from an extremist anti-LGBTQ group and pulled the ad. The Human Rights Campaign knew we had to act fast. We rallied our more than 3 million members and supporters to sign a call to action for the company to take immediate steps to rectify the decision and reinstate the ad.

We not only had to let Hallmark know that the action taken was completely unacceptable, but we also had to show our community we will never stop fighting for visibility, representation and equality. We wanted to come together and put on full display the power of the LGBTQ community and our allies when we rally together. We also wanted to show the world that people and companies can learn and grow from their mistakes and their decisions. And in the end, love won.

As soon as we heard the ad featuring a same-sex couple on their wedding day was pulled, HRC immediately contacted leadership at Hallmark to discuss and investigate what happened and why exactly the ad was taken down. Upon confirming the ad was removed for its LGBTQ content, we took the rare step of suspending Hallmark’s coveted score of 100 on the HRC Foundation’s Corporate Equality Index — the national benchmarking tool on corporate policies and practices pertinent to LGBTQ employees including non-discrimination policies, equitable benefits and efforts to increase LGBTQ competency.

We also sprung into action on the digital front as we rallied and mobilized our grassroots army of more than 3 million members and supporters to make their voices heard. With a following of more than 4 million people on Facebook, Instagram and Twitter alone, we knew rallying support on social media was going to be key to victory.

We set up an action alert petition so we could send a united message to Hallmark that discrimination is not OK. We took to social media — posting 16 times across Facebook, Instagram and Twitter — and sent email and SMS alerts to our base encouraging people to let Hallmark know it failed our community, and we weren’t going to stand idly by.

We asked folks to take action, and take action they did! More than 75,000 people signed on to our petition condemning Hallmark’s decision. In just over 48 hours, Hallmark publicly issued an apology and promised to reverse the decision and reinstate the ad. With our members and supporters behind us, we took to Hallmark an overwhelming mandate for the company to do the right thing. In the end, our strategy paid off.

In just over 48 hours — over the course of one weekend — we saw the results we wanted and deserved. Thanks to our HRC members and supporters, we were able to voice our community’s joint outrage and garner more than 75,000 signatures on our petition to let Hallmark know LGBTQ people will not be erased. Following conversations between HRC and Hallmark leadership, Hallmark ultimately issued a public apology and reinstated the ad.

Our social posts reached more than 6 million people and totaled more than 111,000 engagements, showing this action by Hallmark really resonated with people. By coming together as a community and with our allies, we showed we will never back down on visibility and representation.

HRC looks forward to working with Hallmark in the future to ensure the company is one that lives into its values and pursues meaningful LGBTQ representation, both inside the workplace and in the content it creates. 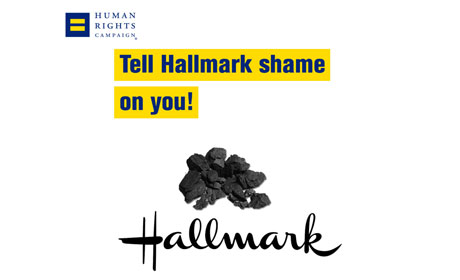