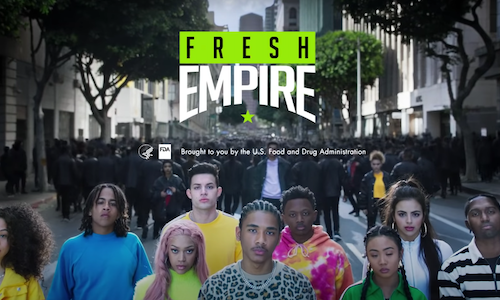 Research shows nearly 5 million multicultural youth are open to smoking or already experimenting with cigarettes. It is also estimated that youth who identify with the Hip Hop peer crowd are 50% more likely to use tobacco than mainstream youth. Hip Hop culture can provide a supportive societal context for tobacco use. And these Hip Hop youth can be marginalized, difficult to reach, and their unique values are rarely incorporated into messages from general market public health campaigns.

After rigorous research, Rescue created "Fresh Empire," which is the FDA's campaign to prevent and reduce tobacco use among at-risk multicultural youth ages 12–17 who identify with the Hip Hop peer crowd. The campaign’s strategy to meet this primary objective is informed by the target population’s beliefs, attitudes, knowledge, and social norms toward tobacco use.

Fresh Empire (FE) pursues this objective with a variety of integrated marketing tactics, including traditional media, experiential efforts, and social and digital media. The campaign finds strategic ways for these channels to work together and prioritizes the strategies that focus on direct interactions through social media platforms, influencers, and events.

Compared to other public health campaigns, Fresh Empire is unique because of its peer crowd approach, robust media targeting, and efforts around social norms. The “Don’t Sleep On The Facts” flagship creative video exemplifies the brand’s unique approach.

Hundreds of identical people in matching, bland clothing walk in the same direction down a city street. A young man faces the opposite way. He removes his bland jacket to reveal a loud outfit —yellow pants, cheetah print shirt. He’s doing his own thing, and he makes his way upstream through the uniformed crowd. His distinctive style breaks up the crowd as we hear his voiceover:
Some still sleepin.’ I’m awake. Wise to the fact. If you smoke cigarettes, you could become addicted.

This is “Don’t Sleep on the Facts,” the flagship video ad from Fresh Empire’s Wake Up creative package. The insights supporting this spot make it a strong microcosm for Fresh Empire’s overall creative strategy.

Before launch, the campaign conducted a thorough literature review and formative research that illuminated key insights about the Hip Hop peer crowd: they value confidence, they think a lot about overcoming ‘the struggle,’ and they aspire to be leaders among their peers. We also learned that our audience highly values appearing fresh, creative, and trendsetting.

These crucial takeaways inform and animate all Fresh Empire creative content as we work toward our public health goal: to prevent tobacco use by Hip Hop teens. For Don’t Sleep, the audience sees trendsetting teens breaking the mold by dressing boldly and seeing the truth about tobacco. The hero talent are confidently leading their peers, urging them to wake up and break the trend of tobacco use. By setting themselves apart from the crowd, these teens embody our target audience’s key values before the closing call-to-action: “If addiction ain’t in the plan for you, then don’t sleep on the facts. Keep it fresh. Live tobacco-free.”

Fresh Empire disseminated this video and the Wake Up creative in multiple versions across many channels. This flagship video, and similar takedowns, were shared and promoted across Facebook, Twitter, YouTube, and Instagram, including Instagram stories. Influencers promoted the content on their own channels. A gamified version sharing the walk-against-traffic aesthetic, called Addiction Swerve, was hosted on FE’s owned website. Paid ads included polls, banners, canvas ads, and rich media like quizzes and a simplified version of the game.

Our aim for this creative was to generate more impressions and engagements among our target audience to spread the public health message, in hopes of furthering our ultimate goal: to prevent tobacco use among Hip Hop youth.

Overall, the Wake Up creative package (including Don't Sleep on the Facts content) received 135MM+ video views (with a 64% video completion rate) and generated half a billion impressions.

User comments for Don’t Sleep on the Facts showed an increase over previous packages in the percentage of user comments engaging with the public health CTA, indicating increased resonance with the message. Fresh Empire’s quiz ad (in partnership with GroundTruth) far exceeded the vendor’s benchmark for engagement rate (20% actual vs. 7% benchmark). Influencer posts shared to our feeds received an average of 6000 engagements, exceeding previous creative packages. The Addiction Swerve web experience saw 250K page views with an average time on page of 3:15 (a 30% increase over previous web experiences).

This success is due in part to Fresh Empire’s media strategy, which reached over 95% of our audience in the first three years (exceeding best practices).

Fresh Empire is a distinctive public health campaign with a crucial health message. Engaging with a niche audience called for authentic, values-based creative, and we are proud of the impact we achieved with Don’t Sleep on the Facts.