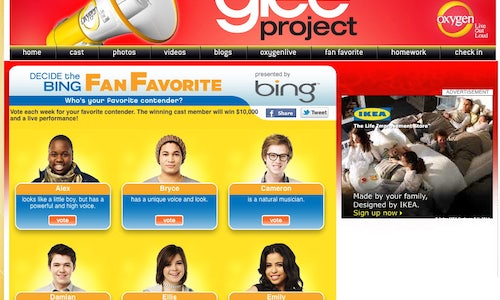 To engage our target audience of social media savvy young women, Oxygen created a season-long, multi-platform competition that drove fans to vote for their favorite contender from "The Glee Project". The winning contender received a $10,000 prize and fans were rewarded with a special performance by the winner. The promotion was sponsored by Bing. Fans were able to vote in the Bing Fan Favorite poll on Oxygen.com, via Oxygen's mobile site and applications, and via a custom tab and application on the show's official Facebook page. After submitting their votes, fans were able to easily follow all 12 contenders on Facebook and Twitter, as well as track results via a leaderboard, and share the poll with friends, all without leaving the page. Fans were also able to access features that were exclusive to each platform. Fans accessing the promotion from their mobile phones were treated to extra blogs from the contenders and fans on Oxygen.com were able to interact with a Bing widget, providing added value to the sponsor. Oxygen's social media team worked closely with the contenders to train them to campaign for themselves using their individual social networking accounts, creating greater overall buzz for the campaign and sustained fan interest. Results During the nine week campaign, the Bing Fan Favorite poll generated nearly 4M votes. There have been 2.3M page views to the promotion's landing page on Oxygen.com (6/12-8/27, source: Omniture SiteCatalyst) , 40% of which came from downstream referrals resulting from fans using the social features on the page to share the experience with their Facebook and Twitter networks (source: Meteor). As of 11/29, the video featuring the winning contender's performance and interview has generated over 250K streams on Oxygen.com and The Glee Project's official YouTube channel. This promotion created immense value for the show and Bing as its sponsor, helping solidify Oxygen's reputation as an innovator that can deliver results within the ad sales community and developing a new revenue opportunity. To date, "The Glee Project" was Oxygen.com's most successful competition reality show site with 2.1M unique visitors for the season. Since the premiere, "The Glee Project's" total social media universe (including Oxygen's "The Glee Project" social media accounts as well as contender accounts) has grown 909% to nearly 1.6M fans/followers. Each episode of the series ranked in the top five most mentioned programs amongst all cable television programs on Sunday nights, with the season finale coming in at the #1 most mentioned show amongst all Cable and Broadcast programs, and over 700K social mentions being recorded throughout the series. (source: Trendrr) Oxygen's innovative digital programs continue to drive high levels of awareness that support on-air ratings growth. Since its premiere on 6/12/11, the series has posted impressive triple-digit growth with +172% in total viewers and +167% among W18-49. On a time shifted basis across the first eight episodes, "The Glee Project" averaged over one million total viewers (1,095,000). "The Glee Project" has reached almost 39 million viewers on multiple platforms, including on-air, Oxygen.com, Hulu.com and VOD. (source: Nielsen Media Research, Omniture, Hulu Partner Portal, Rentrak.) 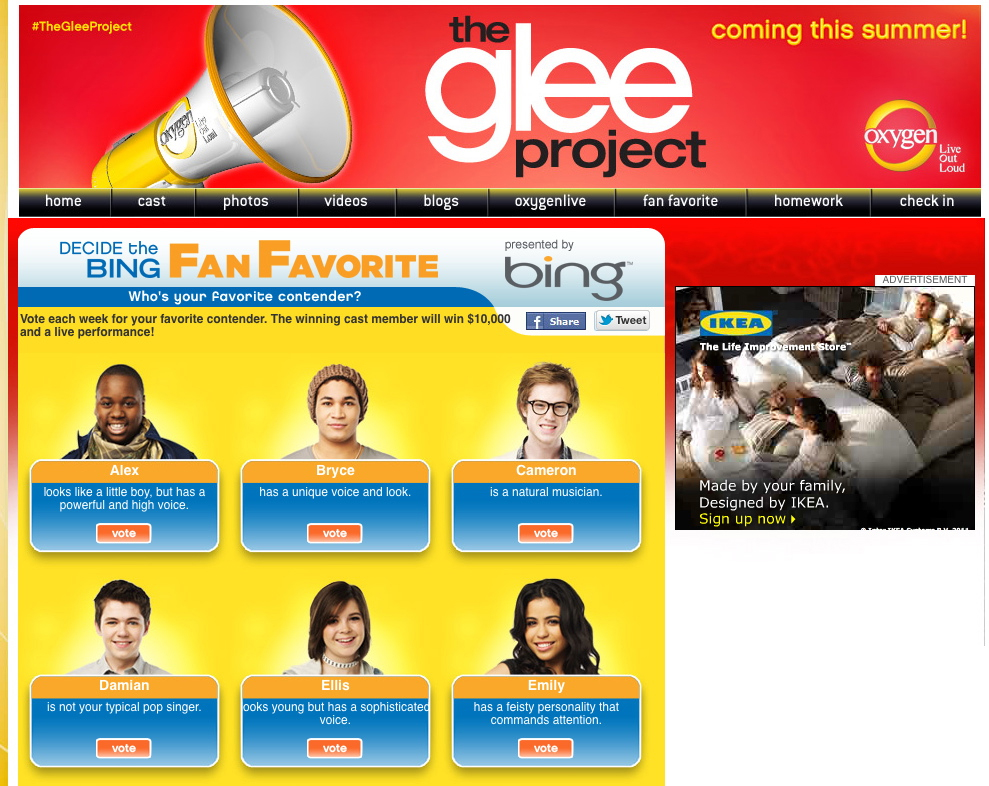