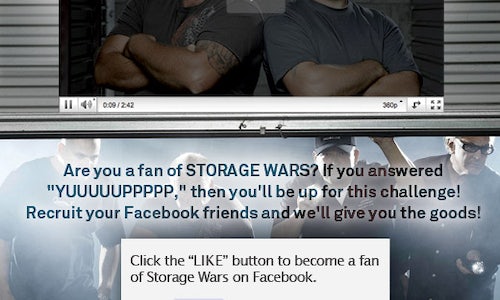 Facebook communities have become increasingly important to the network as they give A&E shows’ most dedicated fans a virtual water cooler to gather around and talk about the show, and ultimately create a destination for fans to become virtual brand ambassadors. The social chatter ripples out to the communities, generates recruitment and creates a demand to watch programs in real time. Beyond spreading word of mouth, it also gives A&E a chance to message fans and reward them for their continued loyalty. With a loyal following established in Season 1, A&E saw an opportunity to grow the Storage Wars fan page and generate excitement and ratings for the Season 2 premiere.With the objective to grow the fan page, generate excitement and drive a strong Season 2 premiere, the strategic approach was to incite broadcast fans of the show to “Like" the Storage Wars fan page on Facebook and increase the total number of fans by 100,000! Upon reaching the goal, fans would be rewarded with a full-length, “never-before-seen" episode of the series via a pass code-protected link only available to Facebook fans. Exceeding all expectations, the Storage Wars fan page grew by 115,000 new fans in less than 30 days, resulting in an engagement percentage of 10% and record-breaking spikes to aetv.com. From June 29 - July 4, the page garnered 19,000 visits. The average time spent on the video page was 13.8 minutes. The video itself ("Fire in the Hole") garnered 52,000 video views and the page garnered 25,000 views from 5 PM on Wednesday (29th) to 5 PM on Thursday (30th). A&E’s season premiere night of Storage Wars pulled 2.9 million A18-49, 2.9 million A25-54 and a 3.5 AA% from 10:30-11p. 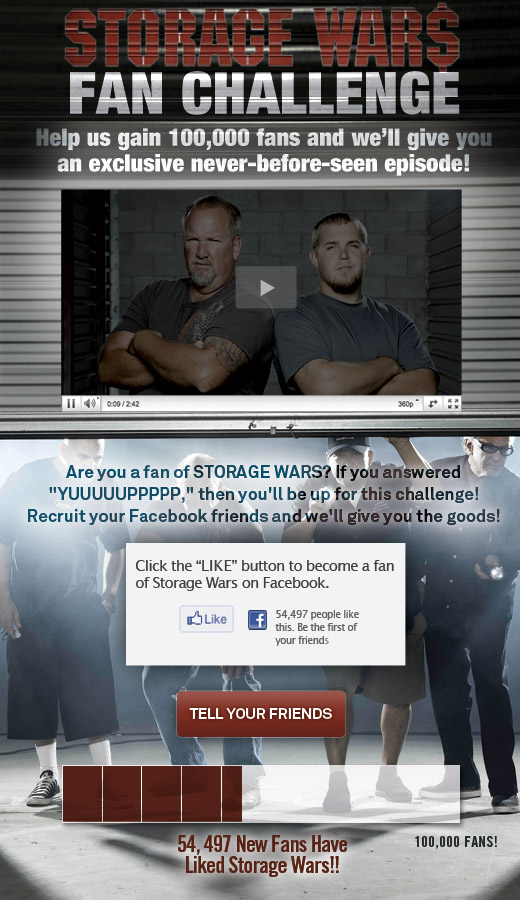