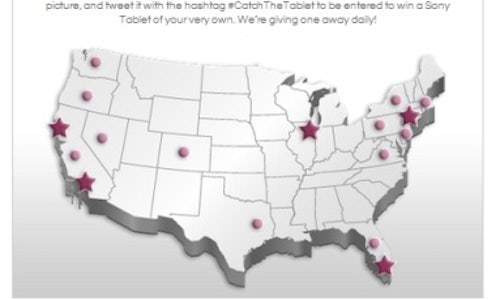 In April 2011, Sony turned to Atomic PR to create a landmark campaign that would excite consumers and garner significant attention for it’s Tablet S. Sony wanted a campaign as unique as their tablet and Atomic delivered. Atomic relied on their traditional and digital media savvy to develop a campaign that ran as a scavenger hunt-type tour, combining online interaction with in-person activities. Atomic dubbed their creation #CatchTheTablet and set out to accomplish the following goals: 1. Grab market attention via media coverage 2. Get consumers excited about Tablet S’s design/features 3. Raise social media buzz 4. Engage fans and non-fans alike on a personal level 5. Drive traffic to Sony Stores across America 6. Increase Facebook impressions 0.5% 7. Increase Twitter impressions 0.5% #CatchTheTablet offered Sony Electronics’ fans more than a preview of the Tablet S. Atomic created a 50-tablet giveaway structure to maximize engagement and reward participants/devotees who created valuable content. It would run for 2 weeks and be open to all US citizens who followed the rules for entry. The hub for the campaign would live on a separate tab on Sony Electronics’ official Facebook Page. Participants were given various options to enter the contest. On Facebook, fans could go to the Catch The Tablet tab and submit their email address. On Twitter, followers could either snap a photo of theTablet S and tweet it with hashtag #CatchTheTablet, or request a city that the tablet would add to its tour of America, also with hashtag #CatchTheTablet. The latter option for Twitter entries gave Sony fans an opportunity to affect the campaign on a greater scale; they were able to choose the “mystery city" where the tablet would appear. #CatchTheTablet is considered the most successful social media campaign ever implemented by Sony Electronics. In just two weeks the #CatchTheTablet Facebook tab received more than 62,700 views and 41,437 engagements, including 8,000+ email entries, 6,200+ clicks on the map, 2,300+ poll votes, 1,000+ clicks on the pre-order link, 1,000 shares and image/video views. The contest collected approximately 9,000 entries (a Sony record), including 600 entries from fans that “caught" the tablet with a picture. The campaign inspired 1,769 tweets with the #CatchTheTablet hashtag, for a total reach of 2,567,711 impressions (surpassing the goal by 97 percent). Sony’s Facebook fan base increased by 8 percent (45,000+), and it’s Twitter following by 4.6 percent (2,300+) during the campaign, completely blowing away Sony's goals. Sony Tablet’s media share of voice increased from .95 percent in June to 6.5 percent in September 2011. 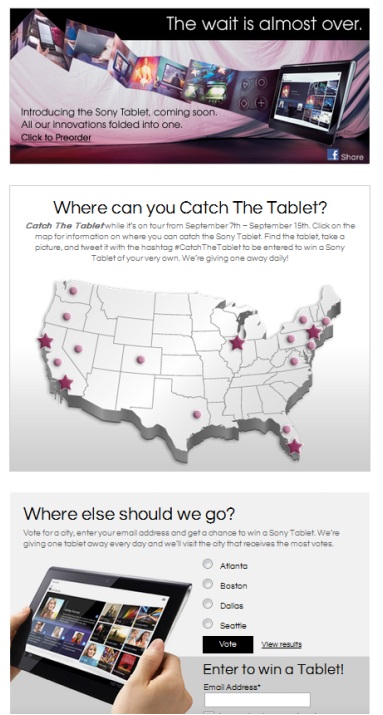