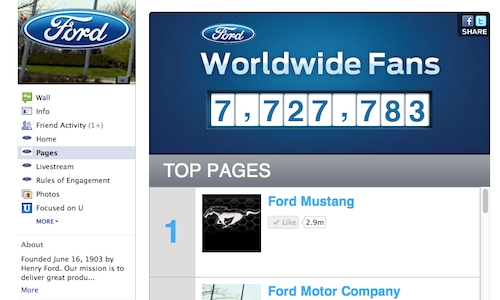 Ford Motor Company takes social media seriously. So seriously, in fact, that they have created more than 50 Facebook pages, a Ford Social website, and an entire new strategy of how to engage in the social space. Ford believes that there should be a social element to everything that they do, and it shows. Some of Ford’s standout standout Facebook experiences they have created in collaboration with Team Detroit and Buddy Media include: 1) Ford Social: Fans can share a badge to show off what makes them proud to be a Ford fan or customer. Fans can choose a badge that speaks to them, such as "I Drive One," "Built Ford Tough," or "Ford Lifer." 2) National ‘Words With Friends’ Game: Fans were invited to compete against actress Jenny McCarthy, during which Ford slowly revealed new aspects of the 2012 Ford Escape. 3) 2013 Ford Fusion: Ford encouraged Fans to exclusively reveal the look of the new vehicle by uploading pictures/videos to share their opinions of the reveal."At Ford, social media is bigger than advertising," Matt VanDyke, director-U.S. marketing communications for Ford Motor Co. recently told Advertising Age. Beyond having a page full of engaged fans who interact with and support the brand on a daily basis, Ford Motor Company, in collaboration with Buddy Media and Team Detroit, has seen some outstanding results in the programs they have launched on Facebook, including: 1) Ford Social: In November 2011, Ford, Team Detroit and Buddy Media created a badge initiative, as a way for people to show off what makes them proud to be a Ford fan or customer. Sample badges include “I Drive One," “Ford Lifer," and “Built Ford Tough." Once users have downloaded the badge, they are prompted to join Ford Social, where they can get exclusive insider goods, such as access to contests, games, and vehicle reveals. The Ford Badge Initiative used Facebook to create a strong community of brand advocates. Through the viral affects of social sharing, a devoted fanbase has been made. Since the November launch, the badges have been opened over 73,000 times across all of Ford’s 50+ Facebook pages. And, the initiative is still going strong. 2) National 'Words With Friends' Game: On November 15, 2011, Ford and Team Detroit partnered with social gaming giant Zynga to create a “Words With Friends" game, where fans nationwide were invited to play and compete against actress Jenny McCarthy. While the game was played, Ford used the Buddy Media Social Marketing Suite to slowly revealed new aspects of their 2012 Ford Escape – the first time Ford had ever revealed a vehicle through a social game. The livestream of the event could be viewed on the Ford Escape Facebook page, where users could also engage with the Words With Friends game. The Ford Escape officially debuted the next day, November 16, at the Los Angeles Auto Show. 3) 2013 Ford Fusion: Ford partnered with Buddy Media and Team Detroit to exclusively reveal the look of the 2013 Ford Fusion by encouraging users to share their thoughts and any pictures/videos that express their opinions of the reveal. To reveal the new vehicle, Ford leveraged Buddy Media products ProfileBuddy, which creates custom Facebook tab for clients, and ReachBuddy, which places and tracks social content across the open web. Through these technologies, fans of the page were able to upload videos of themselves expressing their opinions of the reveal. Ford Fusion received over 2,800 submissions. 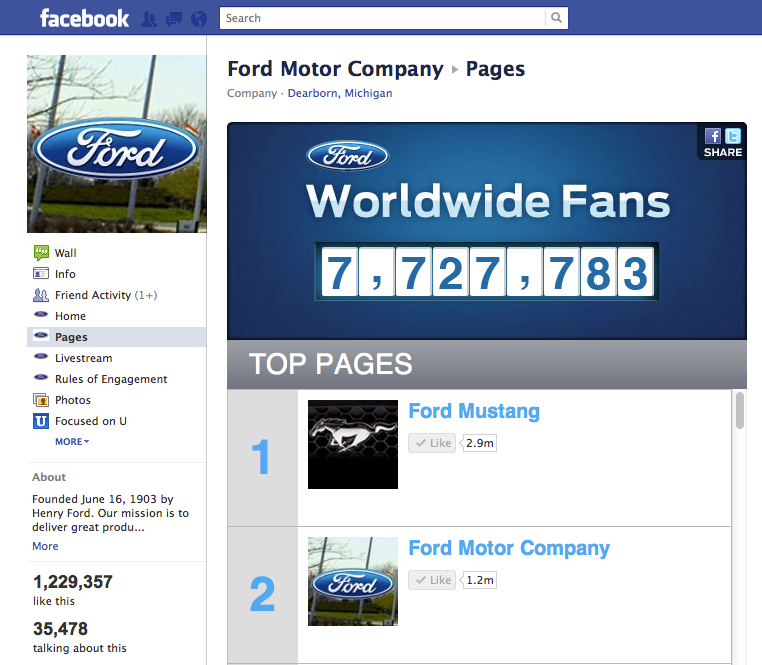