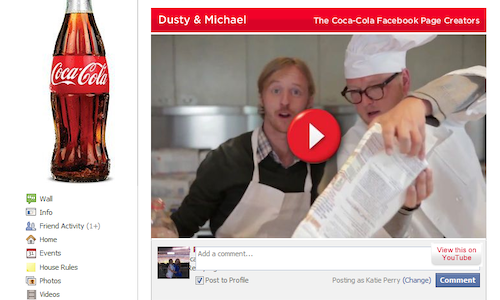 Coca-Cola is the largest brand on Facebook with 36 million fans worldwide. The community, which was created organically by two fans in 2008, is truly for the fans and by the fans. Since Coca-Cola joined the creators to co-manage the page, the community has flourished and currently serves as a paradigm of how brands can use social to connect with people on a global level. In 2011, Coca-Cola used its “Fans First" mantra in social to invite its global Facebook community to join them in celebrating the brand’s 125th Anniversary. Through the effort, Coke connected with a audience of half a billion people via paid and own impressions and saw fans share tens of thousands of comments with fellow advocates. BACKGROUND -- Fans First. That’s the mantra The Coca-Cola Company lives by when it comes to its online communities. It’s an approach that’s less about big brand advertising and more about enabling consumers to celebrate THEIR love of THEIR brand on THEIR terms in a highly relevant, highly localized way. A perfect illustration of this philosophy is the inception of the brand’s Facebook page, which was created in 2008 by two fans, Dusty and Michael, with no agenda other than to honor their favorite brand. When Facebook later mandated that all pages created within its network be brand-affiliated, Coca-Cola invited Dusty and Michael to co-manage the community alongside the brand. Today, the 36 million member community has more connections than any other brand on Facebook. Connecting with Fans: Across social, The Coca-Cola Company encourages fans to weave their own experiences into the stories of their beverage brands by promoting content sharing and interaction. The top objective for The Coca-Cola Company in social is to cultivate liquid stories that spread online through sharing and link back to the brand objectives -delivering brand love and value. Coca-Cola uses social to connect millions and millions of people with each other around the world – every single day. Coca-Cola’s highly engaged communities have established a paradigm of the best way for our brands to engage in social spaces – by focusing on community, maintaining openness and innovating at every step of the way. The fuel to the strategy lies in organic passion that emanates from the brand’s global following. Coca-Cola’s digital communities – on Facebook, Twitter, YouTube and elsewhere – are for the fans, by the fans. The brand promotes community by inspiring fans to share their experiences with Coca-Cola (and millions of their closest friends), and a robust fan-centric editorial calendar ensures that fans are consistently exposed to new and differentiated content. User-generated content (UGC) is paramount, and the brand works to expand – not squelch – the volume of comments, photos and videos submitted by Coca-Cola lovers in its various communities. Active Fan Engagement: Today, Coca-Cola’s digital communities are comprised of tens of millions of people from around the world. The brand is a consistent leader with regard to engagement, as its communities post hundreds of thousands of expressions (likes, comments, multimedia shares) every month across several social platforms. Sharing is the key, because Coke estimates that its 36 million Facebook fans are connected to around 600 million others – nearly the whole universe of Facebook. The Fans First strategy in social has empowered The Coca-Cola Company to raise awareness of its events and initiatives – such its 125th Anniversary celebration (held earlier this year), which: *Reached a global audience of half a billion people via paid and owned media impressions. *Had hundreds of thousands of views of the concert live stream on the day of the event. *Saw fans share tens of thousands of comments with others watching via a special widget. Messaging and media surrounding the event garnered more than half a million total expressions, defined as clicks, comments, likes, tweets and other social actions. Across the 125th Anniversary initiative and the Company’s other programs, brand engagement goes beyond people liking, tweeting and making other social commentary. Coke’s social media fans are drinking and buying the Company’s beverages. Recent custom research shows that a Coke fan on Facebook is twice as likely to consume Coca-Cola and 10 times more likely to purchase Coca-Cola products than a non-Facebook fan. 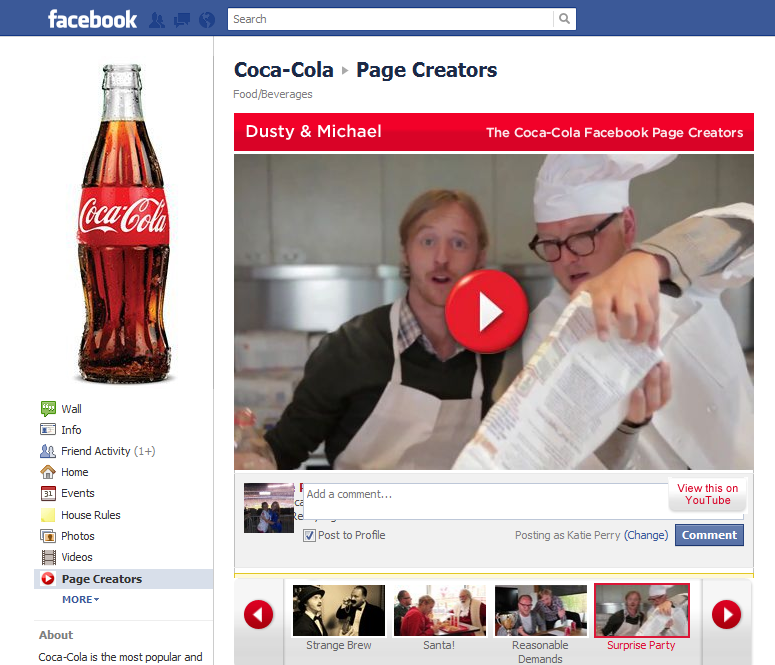