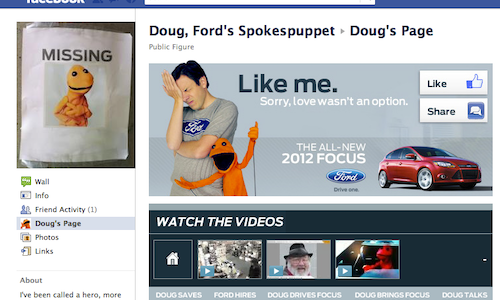 In an effort to broaden the company’s reach to a new and younger audience for the release of the 2012 Ford Focus, Ford and Team Detroit partnered with Hollywood directors Paul Feig (Bridesmaids) and Rob Cohen (The Simpsons). Each video featured the opposite of what would be expected from Ford: an Orange Spokespuppet named Doug. Doug was teamed up with Ford straight man & Marketing Specialist John in order for the duo to showcase the Focus and its features in highly entertaining ways. Through the Buddy Media Social Marketing Suite, the videos were released weekly to Doug and John’s Facebook Walls from March through September 2011. Fans could interact directly with Doug and John 24/7 for seven months straight. The results were truly extraordinary. The real-time interaction between John, Doug and their fans created a fluid, one-on-one, personalized conversation with fans. Responses consisted of not only posts from Doug, but personalized images and numerous response videos directly to fans as well, which helped to develop a devoted group of followers. Beyond liking and sharing the video content with their networks, fans began creating and sharing their own Doug-centric content from handmade Doug puppets, Doug-captioned imagery, videos and more. Contests were held in which numerous participants added Doug into their own pictures and wrote their own poster captions. Fans even camped out on the Doug Tab to be the first to respond when we featured a series of contests over a four-week period to win Doug t-shirts. The real-time conversations with fans on Facebook helped us broaden the company’s reach to a younger and more diverse audience. In fact, 38% of fans were under the age of 30 and 26% were import vehicle owners. Moreover, fans began to talk about the car itself in a positive way. A Facebook attitudinal survey found Doug drove favorable opinion of Focus by 77% and 61% of respondents also reported a lift in consideration. Several people even attributed their purchase of a Focus directly to Doug and shared that sentiment with Doug and their networks. And while the original goal for the seven-month, socially-driven, non-TV-supported campaign was to gain a mere 10,000 fans, Ford acquired over four times that, with over 44,000 fans. And as the fan base grew, so did the level of interaction with them—Ford reached an engagement rate of 0.76%, with Doug's posts being viewed over 1.7 million times. With over 280 million impressions, 3.3 million videos views and over 44,000 fans, our social experiment to create buzz around the Ford Focus by using Facebook turned into quite a success for the Ford brand. Sources as noteworthy as the Wall Street Journal featured articles that gave Ford kudos for embracing such a bold social campaign. 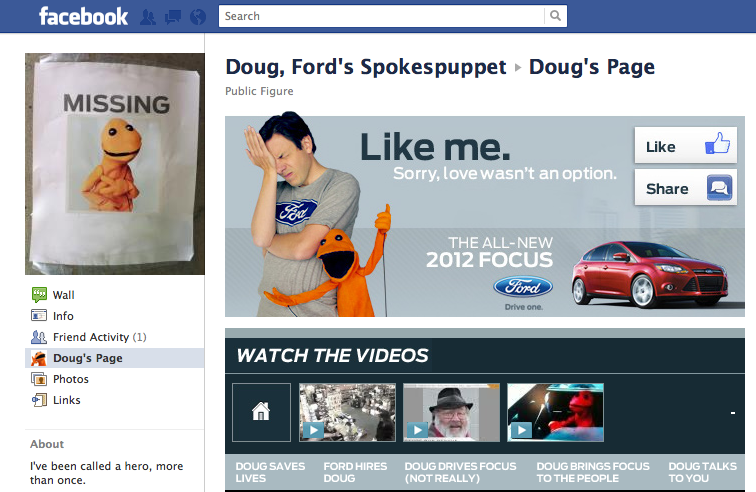