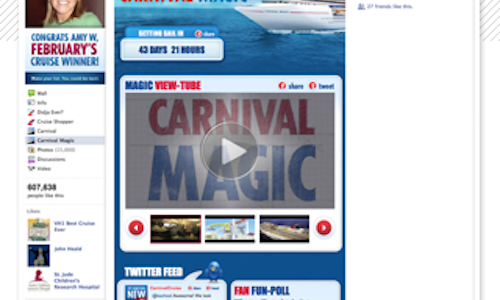 Carnival Cruise Lines partnered with Buddy Media to launch a Facebook presence for its newest cruise ship, the Carnival Magic, as part of a three phase, year-long campaign to create different experiences around the ship, crew and itineraries. Phase one, "Meet the Crew," was the first time a cruise line showcased their crew on Facebook & informed guests who would be on the ship before the actual launch. The Facebook Page featured a photo gallery with various crew members, along with their names, titles, pictures, bios and more. During phase two, "Ask John," Facebook fans submitted questions about Carnival Magic that they wanted Sr. Cruise Director John Heald to answer during the Big Reveal. This phase also featured a shareable countdown clock and a "Vote up and Down" feature where fans could on what they were most excited about seeing. "The Big Reveal" of the new ship included exclusive video, a Q&A where John Heald answered fan questions submitted in phase two, and a quiz component.One of the largest obstacles in the cruise line industry is that there isn't always a lot to talk about before a ship launches, which presents some difficulty for all cruise lines when they are trying to create buzz and sustained engagement and interest around their new ships. However, through Carnival's work with Buddy Media, they were able to beat this by constantly finding new ways to present new info and create fun experiences.. This is something no other cruise line has really been able to be replicate. Carnival Cruise Line's Facebook Page now has more than one million fans, and users have posted more than 14,000 photos overall. Specific to the Carnival Magic launch video sweepstakes, the effort saw 50,000 video views on Facebook in the first 24 hours. On May 1, the day of the Big Reveal, over 3,700 Facebook fans and 250 Twitter followers were acquired and the Page received over 102 fan Wall Posts. During the week of May 1 the initiative garnered 630 related comments, 5,000 quiz submissions, and 4,000 sweeps entries. Throughout the life of the campaign there were over 70,000 interactions with the Meet the Crew phase and over 8,500 poll submissions. The overall goal was to not just promote the new ship, but to educate fans on all of the features and crew members before it launched. Carnival is the first cruise line to conduct a pre-launch initiative of this nature. 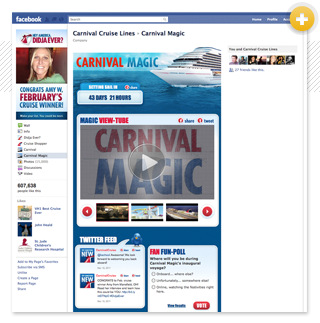