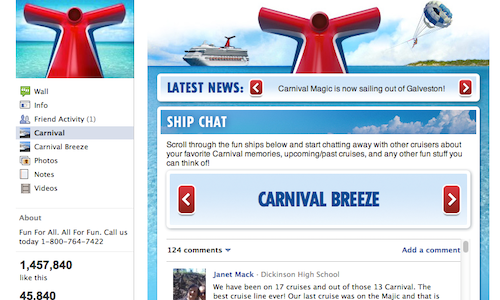 Carnival Cruse Lines is no stranger to Facebook. Having had an active presence for over three years, Carnival has received numerous accolades for their work. In 2011, Carnival wanted to continue to innovate and expand its Facebook presence, in order to remain a leader in the social space. The company partnered with Buddy Media to develop content to highlight their ship launches and company initiatives, including their two sweepstakes, Live Nation and Fun-A-Thon. For their Live Nation sweepstakes, fans could enter to win VIP seats at concerts in Carnival port cities, while the Carnival Fun-A-Thon sweepstakes awarded fans with 24 prizes in 24 hours. The company also developed content to highlight the launches of their Carnival Magic and Carnival Breeze ships, among others. Each program generated tremendous, positive engagement and helped to develop the largest active community of brand advocates and supporters out of any cruise line. It is a matter of absolute importance to Carnival Cruise Lines that they are facilitating a valuable community for their fans. Fans can come to Carnival’s Facebook page to share memories from past trips, start planning for future vacations, and learn more about Carnival news, features and sweepstakes. The page also saves as a tremendous resource for ‘rookie cruisers’ who are not sure what to expect and want to learn more. They are very focused on content, and ask questions in which they genuinely care about their fans responses. “We don’t really see Facebook as media, as we do with display ads, etc. Facebook is about the community and fostering engagement. It’s not a pure awareness play -- it’s a meeting point for all of our constituents to stay up to date with us. We also see it as a new form of lead generation," says Jordan Corredera, Director and General Manager, Carnival Cruise Lines. In June 2011, Carnival became the first cruise line to reach one million Facebook fans. Eleven million people viewed their wall during the 24 hours of their Fun-A-Thon sweepstakes, and the page drew more than 20,000 likes and 5,000 comments in 24 hours, all as a result of earned media efforts. Also impressive is that more than 50 percent of their fan base is comprised of daily active users to the Carnival Facebook page, producing an extremely high fan engagement percentage. In July 2011, each brand wall post garnered an average of 2,500 likes per day and 1,700 comments. In one day, the videos celebrating the launch of the Carnival Magic were viewed more than 65,000 times. Carnival Cruise Lines has made major investments in its social media programs. This year’s national television advertising campaign ends with a call-to-action to join the company on Facebook. The launch of another new ship is on the horizon and social media will play a major part in its launch. The team at Carnival Cruise Lines points out that it approaches social media not simply as another channel, but as an integral part of its overall communications strategy. The company has also seamlessly integrated Facebook content on the Carnival.com website, a first for the cruise industry. “We have fully integrated Facebook, and are really excited about what it could do for our brand," says Jordan. 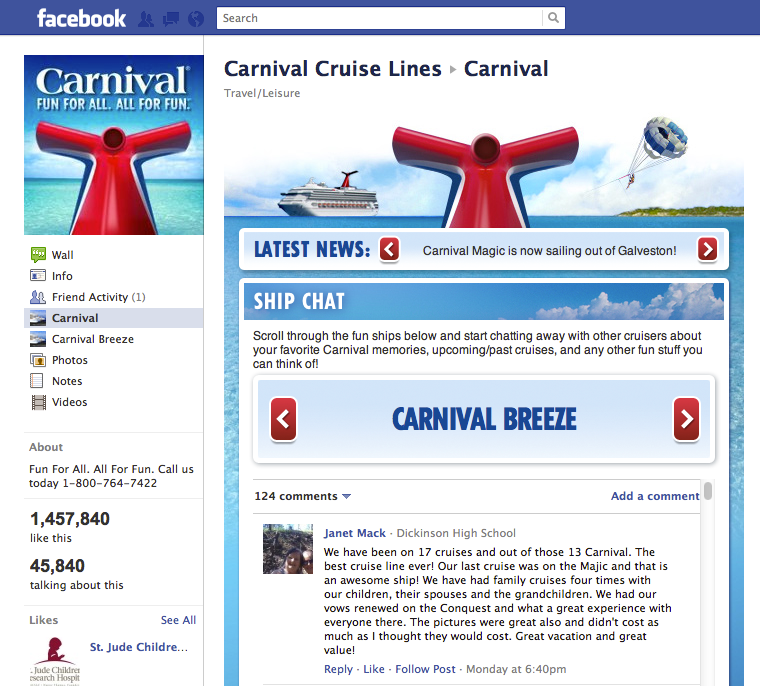