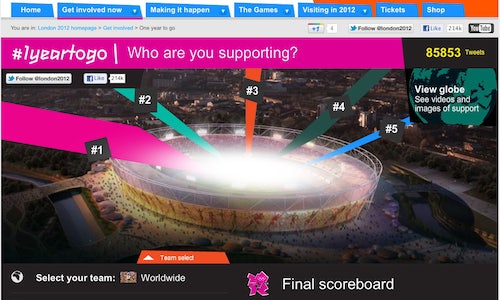 The #1yeartogo campaign created what Mashable.com called ‘a new Olympic event – competitive tweeting’ (http://l2012.cm/pE1Ys4) which raised awareness around one year to go to the London 2012 Olympic Games. Twitter users from 153 countries posted over 165,000 tweets to the ‘Digital Olympic Stadium’ visualisation; www.london2012.com/oneyeartogo, using the #1yeartogo hash-tag trying to tweet their team to the top of the supporters scoreboard. This led to #1yeartogo becoming the top global trending topic on July 27 2011.Please find a video about the campaign here: http://vimeo.com/balf/1yeartogo We built a ‘Digital Olympic Stadium’, which visualised people from all over the world getting behind their countries’ teams ahead of the Games. This was hosted at www.london2012.com/1yeartogo. Users selected their team from a menu which pre-populated a tweet containing the campaign hashtag #1yeartogo, and a hash-tag of their team’s three letter country code (e.g. #GBR for Great Britain). Each tweet containing the country codes was tracked and added to a real-time updated scoreboard for each country. The top 20 supported countries were displayed on the scoreboard beneath the ‘Digital Olympic Stadium’ image. The best tweets from users appeared in the visualisation (in the Stadium, and in a ‘who said what?’ panel). To encourage sharing from and traffic to the visualisation, the pre-populated tweets also included a shortened link to the campaign page, so any users seeing a #1yeartogo tweet from someone they followed could be taken directly to the widget to create their own supporting tweet. The campaign page on London 2012 has received 170,000+ visits (tracked using bit.ly) from the vanity URL contained in the pre-populated tweets alone. To further promote the #1yeartogo hash-tag online, London 2012 encouraged National Olympic Committees, sports governing bodies, key stakeholders, and high-profile tweeters to post using the #1yeartogo hash-tag on the day, including Twitter influencers such as @Fifacom, @MayorofLondon and @Number10gov. This resulted in a truly global take-up of the challenge. Smaller countries such as El Salvador and Venezuela punched above their weight by sheer dint of enthusiasm and local promotion. In total we had support for 153 of the 205 Olympic-affiliated countries. London 2012 also innovated offline to support and encourage the competitive tweeting. The #1yeartogo hashtag appeared on banners and posters seen in print press and broadcast on national television throughout 27 July. For example, #1yeartogo banners were erected around Trafalgar Square in London for the official International Olympic Committee ceremony broadcast live on BBC 1, and next to the diving boards from which Tom Daley took the first dive in the Aquatics Centre. The hashtag was also displayed on the BT Tower above London for the entirety of 27 July, and the ‘Digital Olympic Stadium’ and scoreboard were updated and broadcast regularly on London 2012 Live Site big screens around the country (http://l2012.cm/pqCPVx) 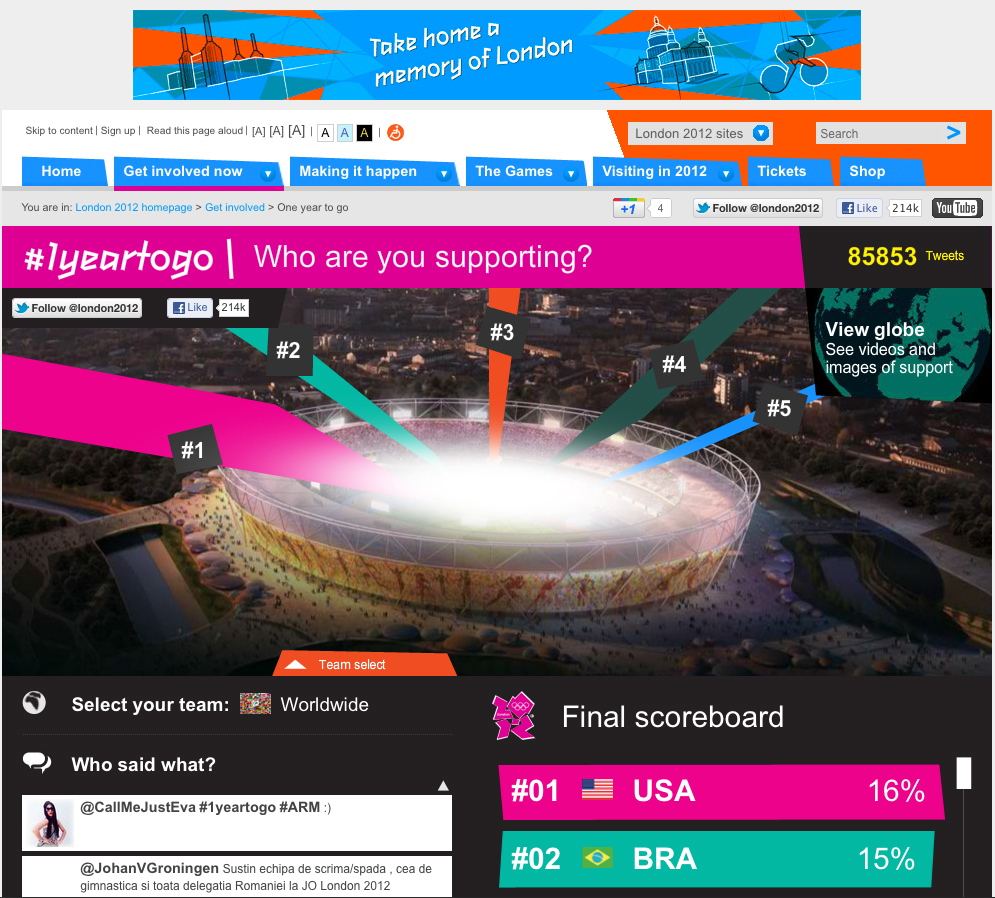