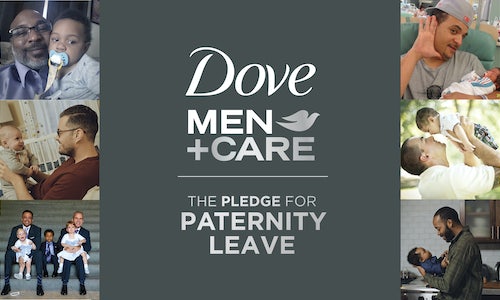 Since 2010, Dove Men+Care has been committed to expanding men’s opportunities to care by addressing stereotypes around masculinity, fatherhood and sports. In 2018, the brand began a transition from simply celebrating the caring role of men into driving action around an issue that inhibits men’s ability to care – paternity leave.

Only 1 in 5 American men have access to any paid paternity leave, limiting the bonding time dads have with their children, the ability to close the gender gap, and the opportunity for men to care for their families. The brand created a platform around their dedication to see a change in the federal policy, making paid paternity leave the new standard for all dads.

This February, the brand extended this commitment to acquire the social proof needed to drive real change for the cause by launching the Pledge for Paternity Leave. However, to meet the urgent need in the U.S. right now, Dove Men+Care also launched the Paternity Leave Fund, a $1 million commitment to fund real dads who aren’t able to take meaningful time off during this important life moment.

Dove Men+Care has mobilized a plan that, with the help of experts and notable organizations, will allow the brand to help impact the lives of all men. These efforts focus on targeting a community to show public demand, working with business leaders to prove economic validity, and communicating directly with policymakers to influence change at the national level.

Through the Pledge for Paternity Leave, Dove Men+Care encouraged all dads, allies and business leaders to show their support of every dads’ right to paid paternity leave. In partnership with well-known paternity leave advocate Alexis Ohanian, the brand sought to drive awareness of the Pledge and the issue of paternity leave.

In addition, the brand launched the Dove Men+Care Paternity Leave Fund, a $1 million commitment to fund real dads who are unable to take meaningful time off during this important life moment. Each recipient will earn $5,000 to eliminate the choice between spending time with family and receiving a paycheck within the first year of the family addition.

Lack of access to paid paternity leave impacts all fathers, outlined in research which found gay fathers to have less parental leave than other couples. Using this platform, Dove Men+Care worked with partner Gays with Kids to create an ongoing video series featuring LGBTQIA+ dads to normalize the conversation of paternity leave in this targeted community.

Through these efforts, Dove Men+Care identified a passionate community of dads and allies who were ready to help influence federal policy change and unveiled a new platform to connect with, inform and arm this community with the tools they need as activists. Advocates for Paternity Leave is a private Facebook group that is dedicated to inspiring the community with news of policy changes, engaging them in an open dialogue around the issue and their own experiences, and igniting the community to take a stand and impact change in Washington, D.C.

Policy changes are unlikely if they conflict with large-scale economic benefit and growth. However, proprietary research confirms that when dads take paternity leave women and businesses also benefit. Dove Men+Care unveiled these findings at the Women Deliver Conference in June 2019, and also introduced a new Global Corporate Task Force, comprised of Unilever (the company behind the Dove Men+Care brand), Deloitte, Bank of America and more. These organizations are dedicated to advancing the corporate conversation around paternity leave policy to ultimately prove the need for government support, but also to reverse stigma around domestic responsibility and paternity leave.

For big and small businesses alike, equal opportunity to paid family leave helps close the gender gap. These findings, addressed in the Dove Men+Care study, were also communicated by UNICEF, a global partner of the brand. The research is important validation in the fight for updated U.S. policy because paid paternity leave can impact everyone and will help drive urgency behind the paid family leave agenda.

The final step to driving change is direct connection with the government officials who can approve, and ultimately pass, paid paternity leave policy. By continuing to garner the social and economic proof needed to build a sound case, the Dove Men+Care team prepares to align with dedicated organizations and groups who can help open the doors of key legislators.

INCREASED AWARENESS AROUND THE ISSUE OF PATERNITY LEAVE

In partnering with paternity leave advocate and internet entrepreneur Alexis Ohanian, Dove Men+Care was featured is every major news outlet in the country including The Today Show, Good Morning America, The New York Times, CBS News, ABC News, MSNBC and more – resulting in over 2,500 earned placements and nearly 2.3 billion earned impressions to date.

This major media push has helped to drive tremendous awareness of the Pledge and Fund, resulting in over 35,000 Pledge signatures and nearly 30,000 Fund applications to date. The Pledge for Paternity Leave has driven cultural awareness and conversation around the issue of paternity leave, proven through Google Trend reports which indicate that, in the last 12 months, “Dove paternity leave grant” and “dove men paternity leave” are leading search inquiries in the U.S. related to web searches for “paternity leave.”

The Advocates for Paternity Leave private Facebook group has nearly 1,000 members to date since its launch for Father’s Day 2019. This group has established a strong community of dads and allies who have shared personal stories related to fatherhood and paternity leave, resulting in over 100 organic posts and over 2,500 organic engagements.

In addition to building this online community, Dove Men+Care worked with existing partnered networks such as City Dads Group and Gays With Kids to further drive awareness of the Pledge and the issue of paternity leave through their owned channels, original content, and network of fathers.