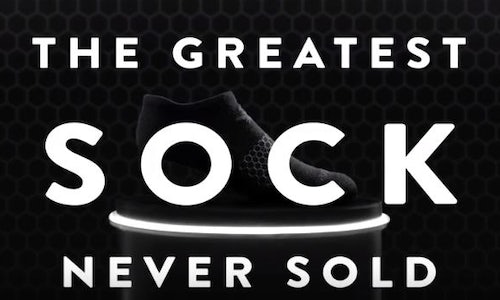 Bombas is a company that sells socks in a multitude of colors, but along with that extensive line, it sells kindness. For each pair of socks that is purchased at Bombas.com, the company donates a specially designed pair to someone living at a homeless shelter.

Socks are the most-requested clothing item at homeless shelters, so Bombas created a pair designed to meet the demands of this environment: The result was a darker pair of socks that showed less wear that was more durable with reinforced seams and contained an anti-microbial treatment to protect against infections.

We created a one-minute hero ad, along with two 30- and 15-second iterations of the ad, “The Greatest Sock Never Sold,” to tell the story of this exclusive sock and the important cause it supports. The objective was to increase brand awareness, sock sales and homeless shelter donations.

The commercial creates a sense of cachet about “The Greatest Sock Never Sold,” which is positioned as a highly coveted item. In scenarios, people imagine getting a glimpse of it at a display in a store window, trying to find a website and looking up at it on a flashy billboard. But, according to the voiceover, “It’s not for sale in any store and it’s not sold online.”

The ad then cuts away to reveal why this pair of Bombas is priceless—the company donates these socks to someone in need every time a customer buys a pair. We meet company founders Randy and Dave, who share their story and connect customers to the beneficiaries of their kindness.

“The Greatest Sock Never Sold” has been Bombas’ biggest TV campaign to date. The homeless initiative has resulted in a total of 22 million pairs of socks being donated to shelters—10 million of which happened over the last year, since the commercial has aired.