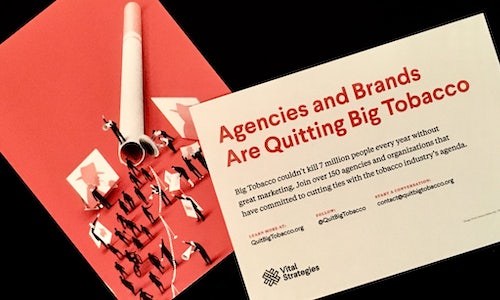 The leading preventable killer in the world is tobacco use, which will kill 7 million people this year alone. The vector for tobacco-related deaths is advertising by the tobacco industry, which persuades consumers to try a deadly product that has been purposefully engineered to be as addictive as possible. It’s estimated that around 90% of tobacco users start at age 18 or younger. With e-cigarettes and vaping linked to more and more lung illnesses every day, more oversight and restrictions are needed. Teen vaping has become an epidemic. Moreover, under the guise of vaping, tobacco companies are working to refurbish their reputation with consumers and governments, all the while remaining steadfast to selling their core product – cigarettes.

Our Quit Big Tobacco campaign educates and recruits the advertising and PR firms that the tobacco industry needs to design campaigns that lure new customers and woo governments to delay and stop sensible health policies. The campaign is building a coalition of health-conscious brands and agencies who pledge not to create tobacco advertising or work with creative agencies that do. Quit Big Tobacco means less effective marketing for Big Tobacco, which ultimately means fewer kids take up smoking and more tobacco users will quit.

We laud the positive values of our pledgers to their clients and consumers. In news media and at events we work to create a new norm among the advertising industry that tobacco is a disreputable commodity to promote.

We seek to educate the corporate, ad and PR world around the ethics of working to promote tobacco use. Few outside of public health understand the gravity of the tobacco and teen vaping epidemic, and fewer understand the importance of advertising in that epidemic. We use our high-reputation campaign champions to generate attention in trade news media.

Quit Big tobacco uses PR to generate news coverage, peer-to-peer networking and engagements at trade events to recruit members, and digital media to grow our relationships with members and drive awareness among the advertising industry and the public. Our campaign website includes a “Sign the Pledge” section where agencies and organizations can sign on, committing not to work with the tobacco industry or with ad and PR agencies that have industry clients. Pledge signers are featured on a “Supporters” section on the site.

Our priorities include leveraging strategic partnerships; regular outreach to agencies and brands; cultivating media relationships; securing a big-name brand to increase visibility and awareness; encouraging leading creative voices to champion the campaign; and reaching the advertising and marketing community at key events like the Cannes Lions Festival of Creativity, the Effie Awards and SXSW, either in-person or virtually. During the Cannes Festival, the campaign highlighted the fact Philip Morris International was being featured on the event's "Good" track, alongside the likes of Sesame Street, UN Women and Greenpeace (see our #WhyCannes video below), generating significant attention within advertising and PR trade media.

Quit Big Tobacco has grown quickly because we cultivated a strong network of notable champions within the PR and advertising world, and a marquee corporate sponsor in CVS Health. More than 275 agencies and brands have signed on to the campaign—brand, advertising and PR leaders like Truth Initiative, Crispin Porter Bogusky, MDC Partners, Edelman, GSD&M and many more.

Executives from these and other pledging agencies are key to building relationships with like-minded brands and agencies, encouraging them to sign our pledge. Influencer Alex Bogusky prompted several new pledges by penning a NY Times op ed featuring the campaign: “How Big Tobacco Got a New Generation Hooked."

Quit Big Tobacco has sparked an international conversation between health-oriented companies and their ad and PR vendors, showing that collective action from unlikely partners can drive change.

We’ve secured more than 275 pledges from brands and agencies. In April 2019 we announced CVS Health as the first corporate partner to take the pledge. The campaign has attracted top-tier influencers in health and advertising, including Michael Bloomberg, Norman de Greve, Truth Initiative and American Lung Association. In May 2019, CPB’s Alex Bogusky became an influential voice for the campaign, authoring an NY Times op ed and posting a LinkedIn video, calling on peers to take the pledge.

Our pledge has also taken more than $500M in advertising account value off the table for agencies that work with tobacco - creating further business incentive for agencies not to create pro-tobacco campaigns. 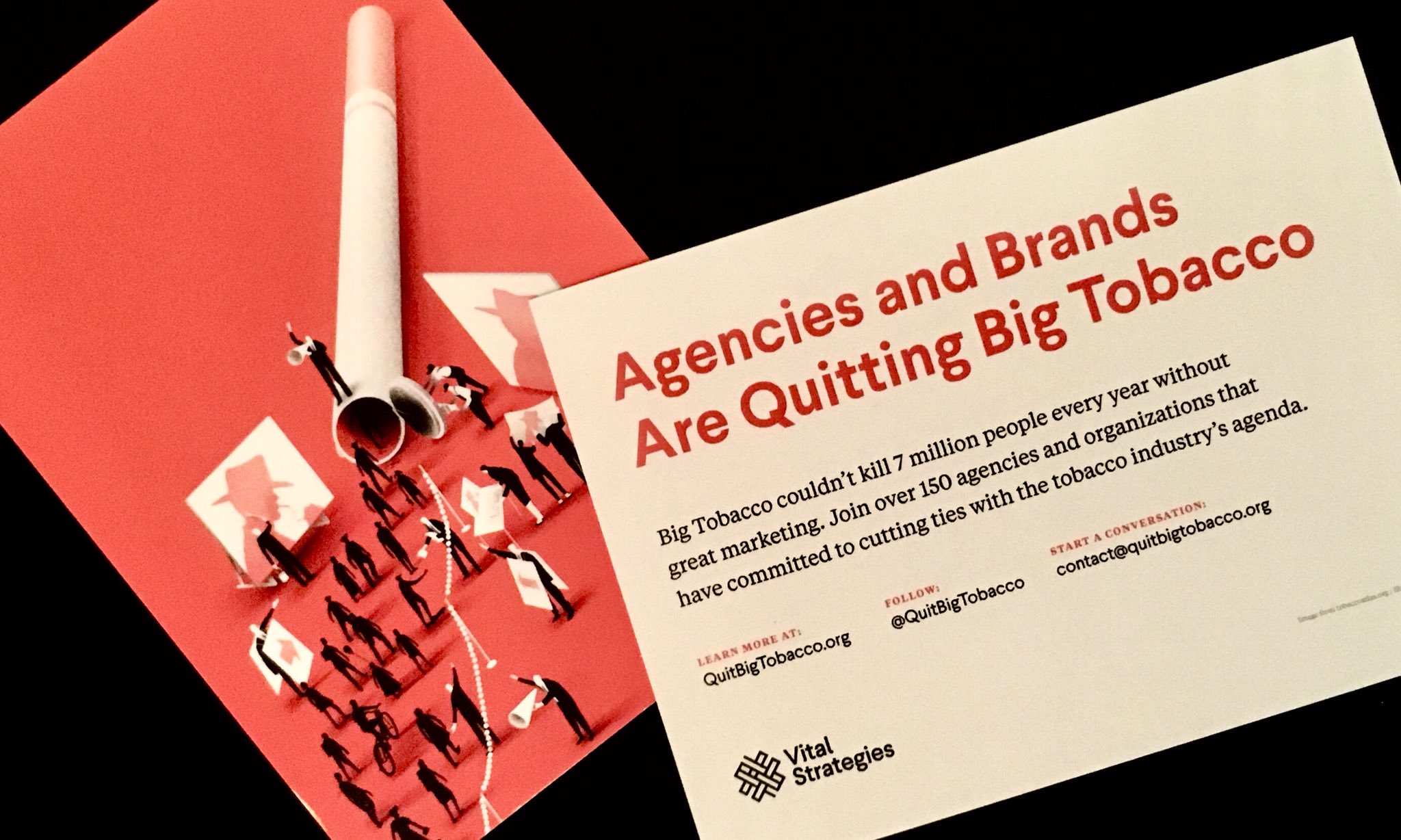 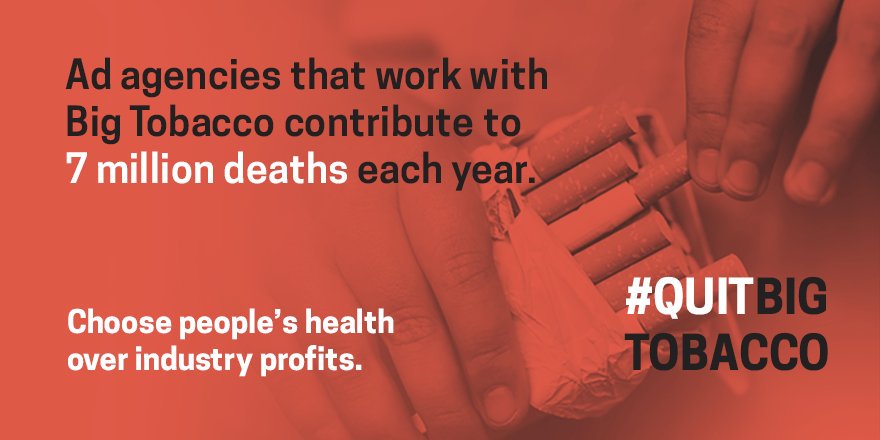 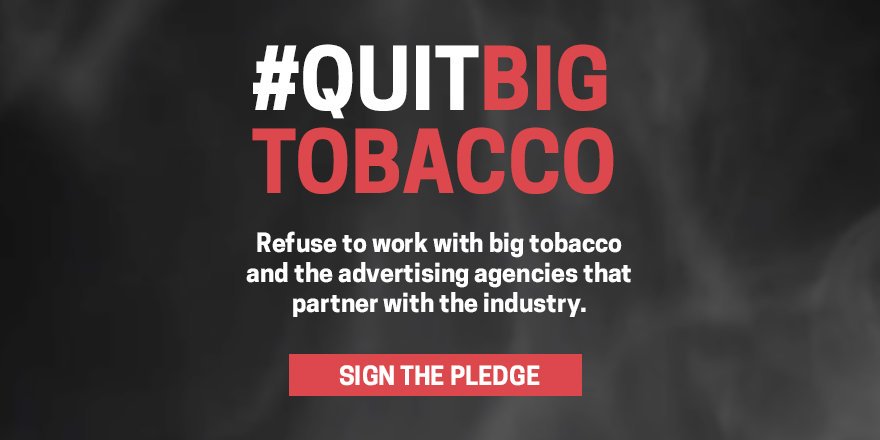 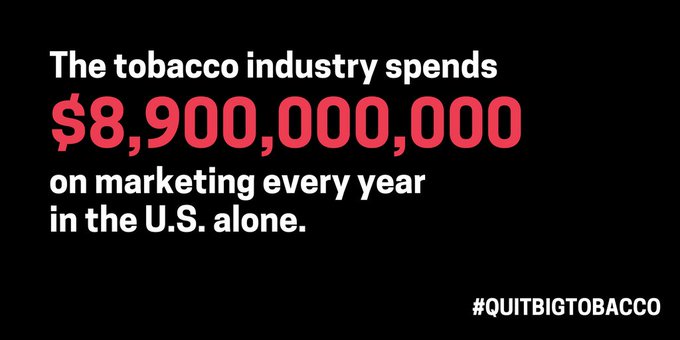