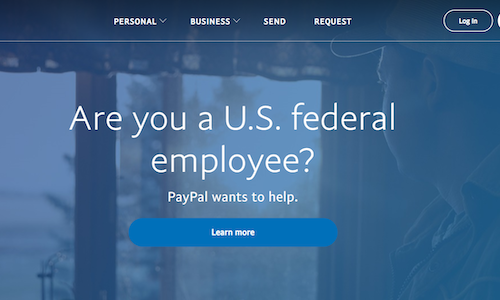 Between December 2018 and January 2019, the U.S. federal government experienced its longest shutdown in history. The shutdown affected federal employees’ entitlement to paid holidays for Christmas and New Year’s Day. And on January 11, over 800,000 federal workers missed a paycheck—with many of them not eligible for backpay once the government reopened.

Data shows that 50% of the U.S. population runs out of money before the end of the month, 40% of all Americans are not financially able to cover a $400 emergency expense, and 80% of full-time workers in the U.S. live paycheck to paycheck. So when these federal workers went unpaid, many Americans could not afford their rent, groceries, or gas—and many resorted to rationing life-saving medications such as insulin.

PayPal is consistently driven by its mission to democratize financial services, and motivated to put the company’s values into action. Grounded in this conviction, PayPal President and CEO Dan Schulman saw the government shutdown as another moment in the company’s history where the private sector needed to step up to help furloughed Americans. He personally initiated the idea for PayPal to offer $500 in interest-free cash advances to furloughed U.S. government workers, providing up to $25 million in interest free loans. Knowing time was of the essence, in just a few days time and in partnership with Synchrony, PayPal launched the program and fully integrated communications campaign that connected furloughed workers to this much-needed capital.

To announce the commitment, PayPal published an op-ed bylined by Dan Schulman in USA Today, and booked a live interview on MSNBC where Dan discussed the initiative with anchor Stephanie Ruhle. The communications team also proactively pitched media and responded to incoming media requests in real-time.

In parallel, on social media, PayPal shared a CEO video on Dan Schulman’s LinkedIn, Facebook, and Twitter accounts. The video was also amplified on the company’s YouTube, LinkedIn, and Twitter pages, and a drumbeat of additional social content continued in the days following.

Understanding that employees are often a company’s best ambassadors and advocates, PayPal was also intentional about communicating the initiative to employees as a key stakeholder audience. Internal communications tactics included a personal note to U.S. and VP+ employees directly from Dan, a blog post to “The Bridge” (PayPal’s internal communications network), and a video created for internal channels that built enthusiasm for the initiative. Additionally, PayPal invested in paid campaigns on Facebook, LinkedIn, Twitter and YouTube to target federal workers and ensure they learned about the program. This was not with the goal of driving publicity, but to reach those affected by the federal relief program with laser-focused targeting that drove to a custom PayPal Helps landing page where they could sign up for the loans.

Finally, PayPal placed a prominent banner on PayPal.com and in the PayPal app to direct traffic to the landing page, and distributed an email marketing campaign to PayPal customers.

The following is a condensed version of the plan’s execution on launch day (January 18, 2019):

- 7:00a: USA Today publishes an op-ed bylined by President and CEO Dan Schulman, with syndication to 109 publications; op-ed is circulated internally.

- 7:16a: Paid social campaigns on Facebook, LinkedIn, Twitter and YouTube went live, specifically targeted to reach federal government workers who had been affected by the shutdown.

- 8:00a: Employee email to U.S. employees and global VPs+ is sent, along with other internal communications specific to certain teams.

- 9:30a: Dan Schulman appears in a live interview on MSNBC.

- 10:00a: Email to PayPal customers is sent; banners go live on PayPal.com; video is circulated internally.

- 12:00p: Video of full MSNBC interview is amplified on Dan Schulman’s social channels, as well as the @PayPalNews Twitter.

The morning of the launch, Dan Schulman’s op-ed ran in USA Today and syndicated to 109 publications. Dan also appeared live with Stephanie Ruhle on MSNBC and subsequent coverage resulted in Fortune, Yahoo! Finance, Reuters, The Hill, ABC News, Bloomberg, and dozens of others. At the end of the first day, there were more than 35 news stories published, and after the first week, media impressions totaled 409 million. In the first 24 hours, PayPal received 8,000 social mentions. Social media posts on Dan’s and PayPal’s channels earned a combined 1.7 million+ impressions and 28,300+ engagements in the first two weeks. From the initial announcement to the end of PayPal’s paid social campaign, there were approximately 12,500+ mentions of the news on Twitter. And, at the time it was published, the video also became Dan’s all-time most-shared piece of content on social media. Influential figures including Senator Cory Booker, Chef Jose Andres, and NBC’s Jill Wine-Banks shared the announcement on their social channels and lauded PayPal for its commitment to values and leadership. In the time that the government remained shut down, PayPal received 5,500 total calls to their Global Customer Operations centers from thankful members of the public. One sample quote from a federal employee calling PayPal reads, ““This is incredible… You have my wife in tears… I don’t know if you understand…this is actually groceries this week.” The announcement video earned more than 510,000 views, and 1,327 people opened new PayPal accounts. 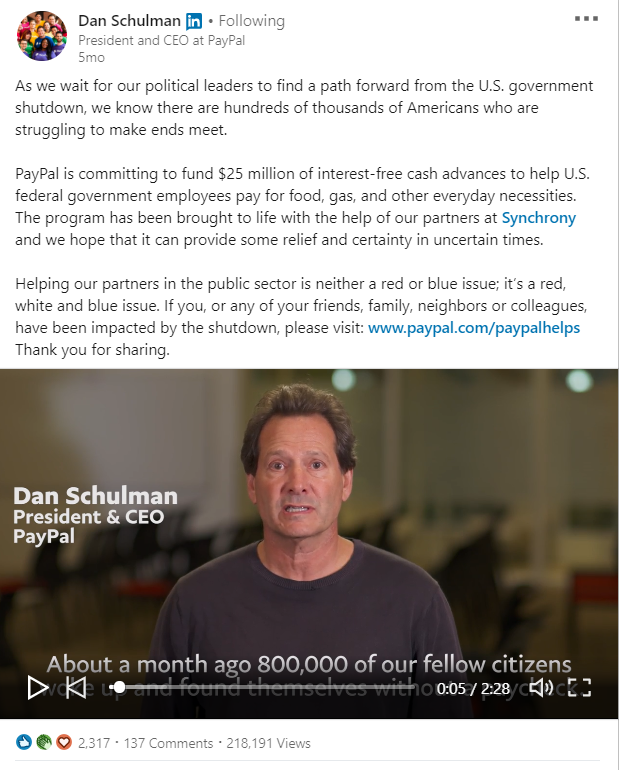