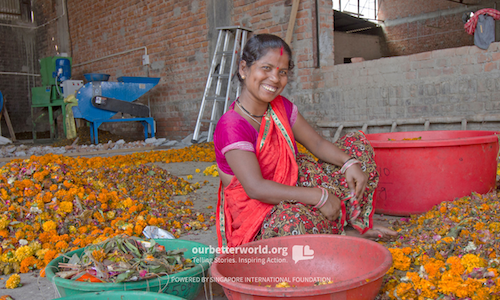 New life for waste flowers, and for these women too

Our Better World (OBW) is the digital storytelling initiative of the Singapore International Foundation that tells stories across Asia to inspire people online to take action and create a positive impact in the world.

When it comes to gender equality, India is ranked 95th out of 129 countries. OBW searched for stories of people on the ground helping empower women.

HelpUsGreen is a social enterprise that employs marginalised women who were previously sanitation workers and manual scavengers, to recycle flower waste thrown into India’s rivers from places of worship and turn them into incense and vermicompost.

Manual scavengers clean human waste with their bare hands and are treated as “untouchables” under the prevalent caste system. HelpUsGreen helps counter the stigma by providing these women an alternative livelihood in a respectful, disease-free working environment. The six-fold increase in their income empowers the women and enriches the lives of their family.

Most are now able to save money and send their children to school. Sixty per cent now earn higher wages than their husbands, giving them a say in household decisions - a factor that is seen to lessen domestic violence. This brings about systemic change.

In addition, these women are brought into the formal economy - provided documentation and bank accounts. This gives them access to credit. In turn, it helps the family at large—running the household, medical expenses and emergencies, and kids' education.

The goal was to create awareness on how HelpUsGreen is empowering women on the fringes of society and get people to buy their eco-friendly incense on their website.

Given the uplifting, innovative work of HelpUsGreen, our content strategy was to focus the story on one woman - Ranjana - and her transformation from a hospital worker cleaning up after patients to a flowercycler who now has a bank account, pays her children’s school fees on time, and even owns an LCD TV.

The campaign strategy was to serve the video story to three audiences who would likely resonate with the story: (1) people interested in women empowerment / gender equality, (2) environment and (3) online shopping. We tailored the messaging of each post reaching these specific audiences to highlight interests relevant for each group while keeping to the overall objectives.

We also extended the reach of the story across Southeast Asia where women empowerment stories get traction: Singapore, Malaysia, Indonesia and the Philippines.

We took an informed two-step approach on Facebook. Each asset created for this story launch had a specific purpose.

First step: Inform and build awareness through the video post and the link ad to the story page on our site.

Second step: For those who watched the video and viewed the photo album, they were served a link ad to the call-to-action page on our site to drive action.

On Facebook, the video story was to engage people in a healthy discussion around women empowerment, especially for Dalit women in India. Since the topic of so-called “untouchables” was contentious and have the potential to press people’s red buttons, we created a comprehensive internal document on questions people may have on the caste system and the plight of the Dalit community in India. This helped facilitate conversations and kept us grounded on our belief that every human being should have the right to earn an honest living with dignity and respect.

Our role as storyteller also meant we encouraged productive and civil conversations on the issue featured in our story. We believe that a healthy, open, respectful discussion on gender inequality and the caste system in India would help open hearts and minds to HelpUsGreen’s work. Our team prepped for all kinds of questions and comments. Despite some hostility from a few people calling out Ranjana’s caste, overall the generally respectful and positive comments led to a healthy discussion. Many even took the time to write heartfelt comments sharing their well wishes and esteemed regard for Ankit, the founder and the work he does through HelpUsGreen.

The story also appealed to our non-Indian community, who despite cultural differences, understood the impact and importance of HelpUsGreen’s work towards gender equality.

On Instagram and Twitter, our posts took the same tactic by targeting from all three angles – women empowerment, environment and online shopping – in our messaging using social media assets ranging from video posts, carousels and website cards.

HelpUsGreen needed awareness and sales. We used our video story plus ancillary assets created out of that video to get them the help they needed.

Our Better World’s two-week campaign resulted in a 15-fold increase in visitors to HelpUsGreen’s website.

The story was launched a few weeks before Diwali (the festival of lights, which is celebrated by Hindus, Jains, Sikhs and some Buddhists every autumn) and HelpUsGreen’s stock for the festival was sold out after the story was told. The story was viewed more than 1.7million times, was shared 9,774 times and received 1,041 comments. Interestingly, even if we didn’t call for volunteers, the story inspired 1,823 new volunteer sign-ups for HelpUsGreen.

“The story made people think about the problems of manual scavenging and flower pollution and helped us create an emotional connection with those who can influence the reach of the impact significantly.”

Months after Our Better World told this story, HelpUsGreen saw its unique idea plant seeds of hope across India and beyond.

Some 560 enquiries to set up similar facilities elsewhere in India poured in, while a group of passionate students, scientists and entrepreneurs invited HelpUsGreen to Nepal to discuss the possibility of bringing the social enterprise there.

HelpUsGreen continues to sell a product every minute, and sales overall have quadrupled.

There is also growing interest from businesses for their signature FloraFoam, a material akin to Styrofoam produced from the waste flowers, to be used as packaging material.

Video for New life for waste flowers, and for these women too 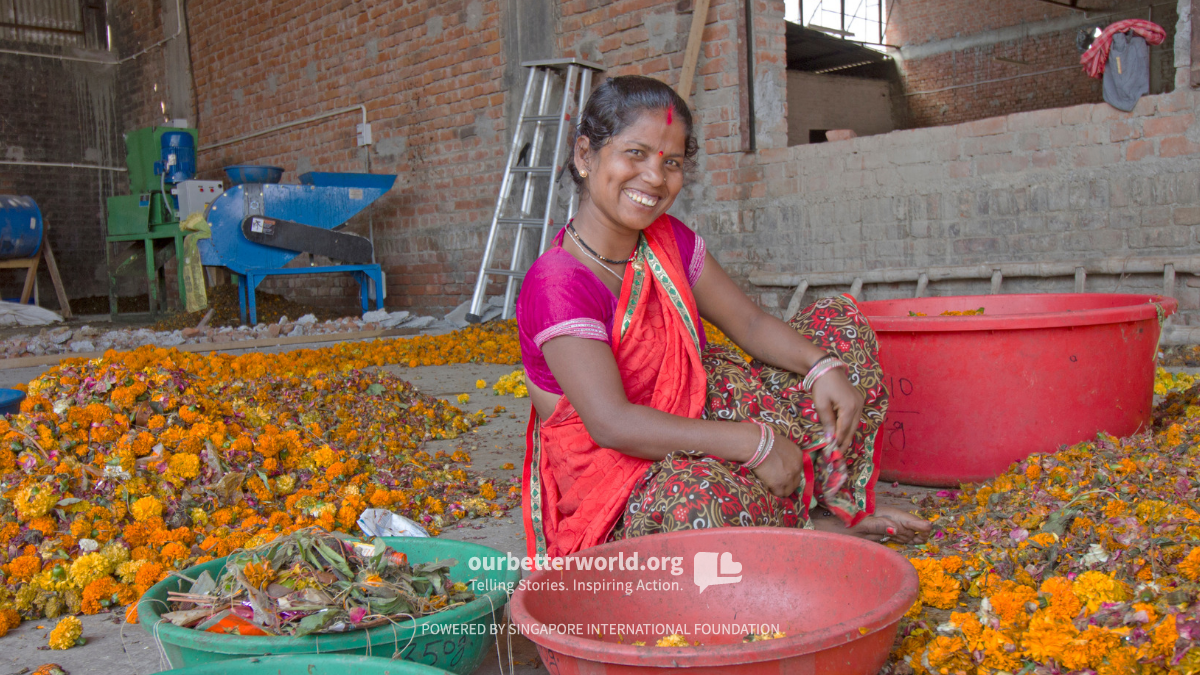 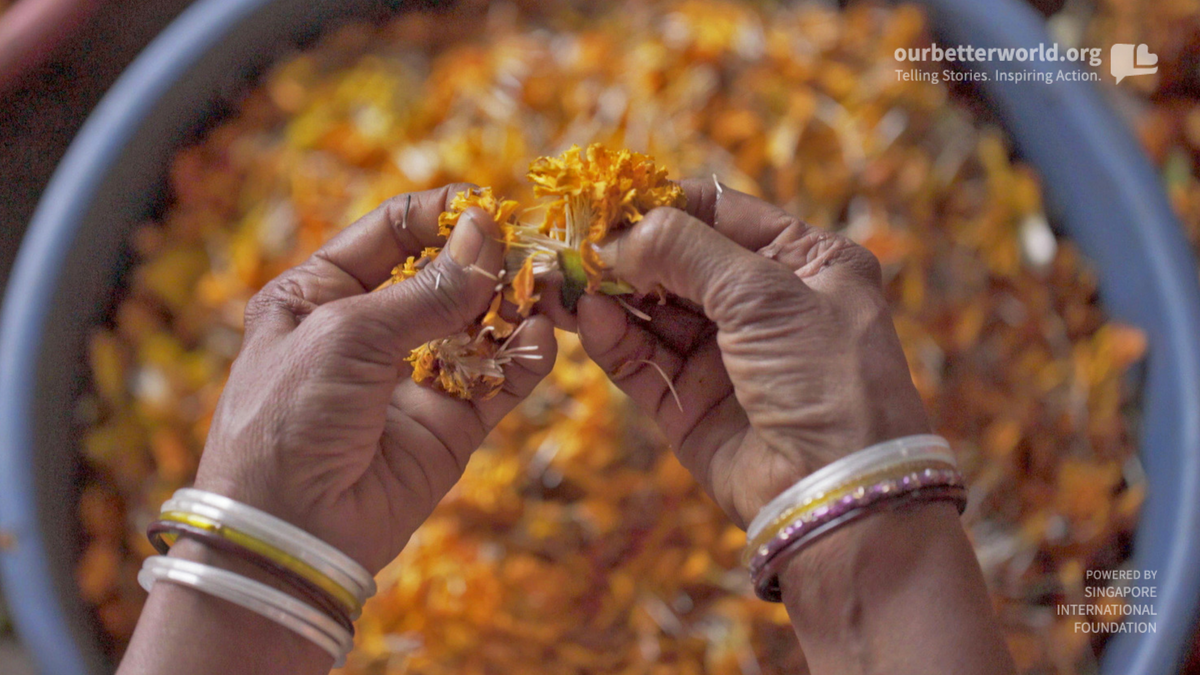 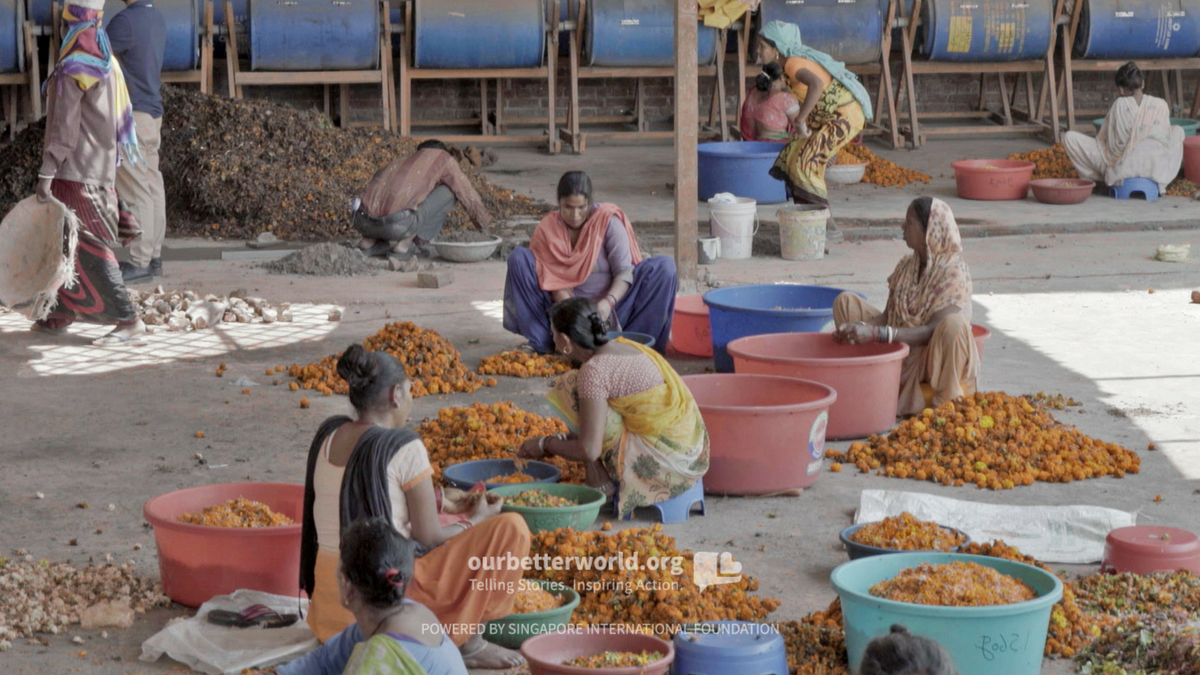 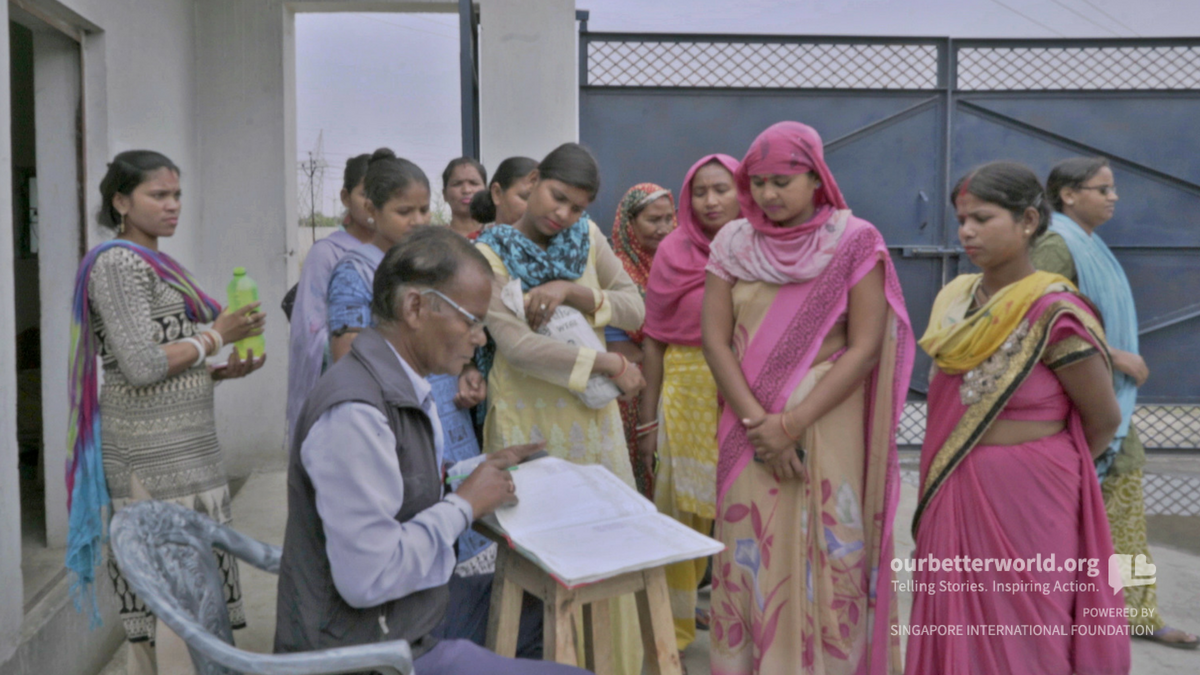 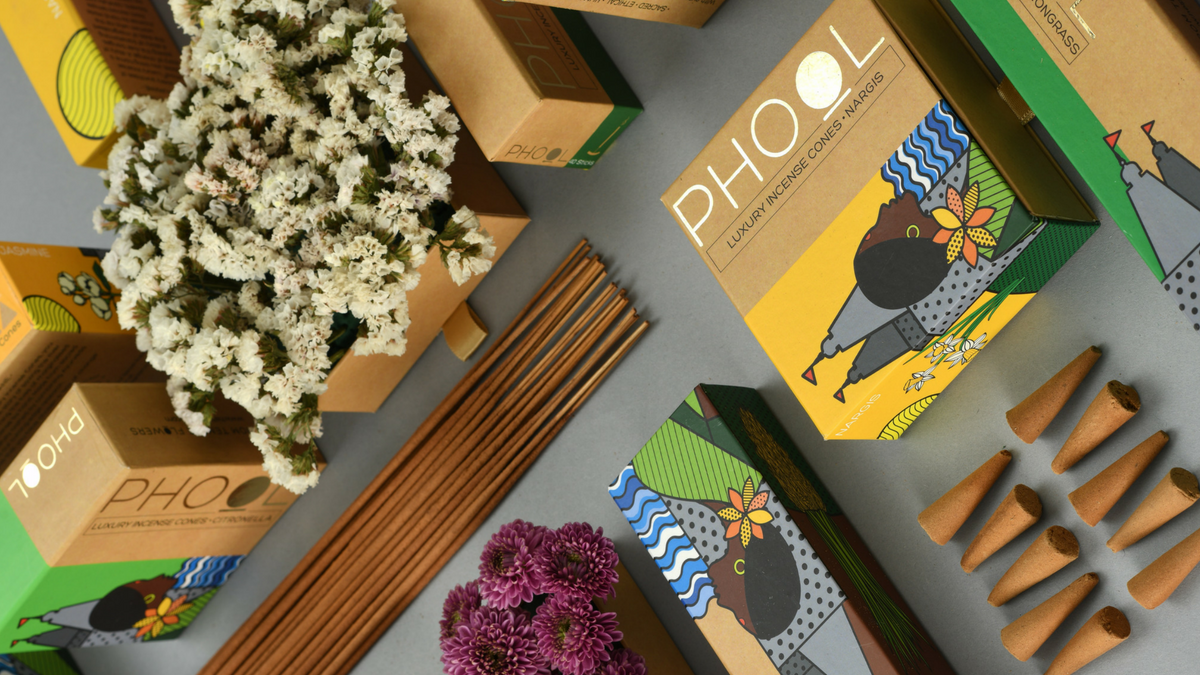 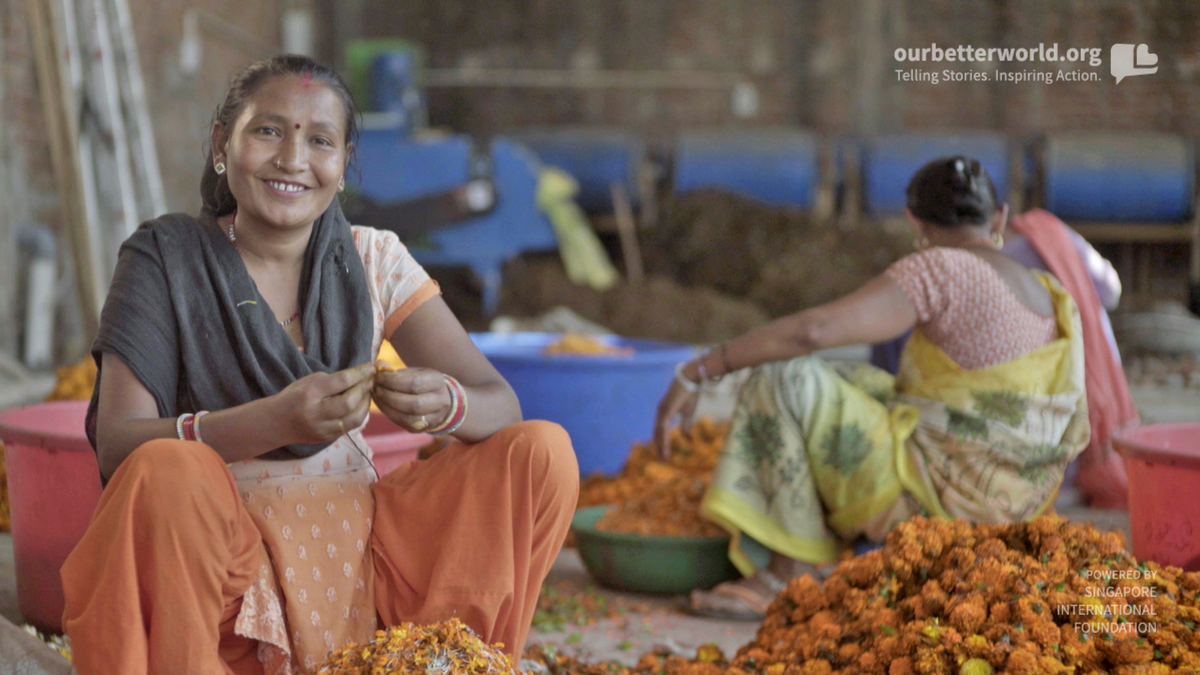 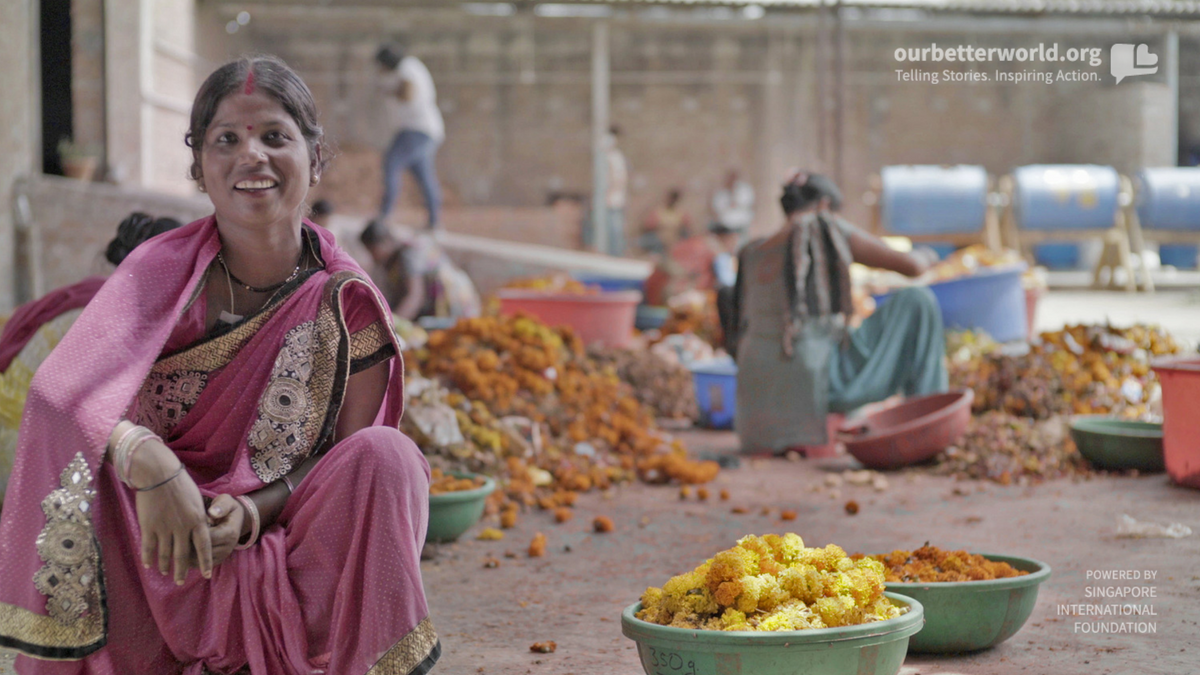