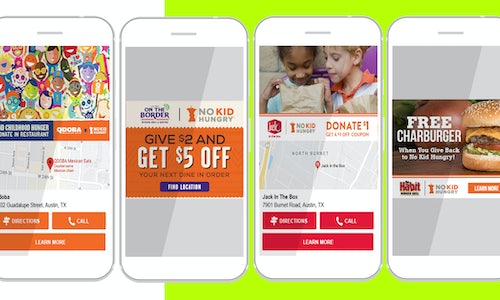 No Kid Hungry removes the barriers that stand between a child and the healthy food they need, every day. Dine for No Kid Hungry is the organization’s year-round, restaurant-led campaign to raise funds to end childhood hunger in the U.S. For the month of September, No Kid Hungry partnered with leading location platform, GroundTruth’s CSR initiative, “Location for Good”, to drive potential customers into four participating restaurants: Habit Burger, Jack in the Box, On The Border, and Qdoba.

Each of GroundTruth’s Location for Good campaigns is built around one core principle—to use location-based technology to support a non-profit’s goal, which for No Kid Hungry was to create awareness, drive action and generate donations by partnering with restaurants. The additional parameters used to measure the success of the campaign were Click Through Rate and Secondary Action Rate, which includes clicks for directions or more information.

To support the campaign, No Kid Hungry drives potential customers to its No Kid Hungry Map, which highlights the promotions of its “Dine Out” partners and lists the locations of all participating restaurants. No Kid Hungry also rolls out an annual national public relations campaign to promote the campaign to consumers by creating opportunities for participating restaurants and encouraging diners to join its “Dine Out” call-to-action. The challenge with that approach is that it’s not tailored to specific audiences, and advertisements and promotions are not always shown at a time when individuals could directly donate to the cause or dine at that specific restaurant.

GroundTruth and No Kid Hungry devised a strategy that would maximize donations to the Dine campaign. Among the 75 million mobile device signals GroundTruth sees, each represents a consumer using a smartphone within a mapped or ‘blueprinted’ brick-and-mortar location or point of interest. GroundTruth harnessed this sophisticated technology and its extensive knowledge of the Quick Service Restaurants (QSR) industry, including past campaign successes with Outback, Taco Bell and Denny’s to gain a deeper understanding into the Habit Burger, Jack in the Box, On The Border, and Qdoba consumer—where they go, what real-world behaviors they exhibit, and what they’re likely to do next—to build effective audiences for targeting.

The team decided the most results-driven solution was to connect with brand loyalists—customers who visited the restaurant before and would likely visit again to donate. GroundTruth employed its new strategy to the Dine campaign for No Kid Hungry to identify groups of individuals who would be receptive to visiting the participating restaurants and would receive mobile ads as they were out and/or when they were in proximity to a participating restaurant. By leveraging its analytics, GroundTruth determined that loyalists were those audience groups that visited the restaurants during local store business hours at least twice a month. GroundTruth excluded those observed as showing employee behaviors (visiting at least five times a week).

Through its research, GroundTruth found that brand loyalists who visited the participating restaurants probably did so because of convenience and by targeting those audience groups in close proximity to these establishments, GroundTruth would be able to successfully convert users, a strategy that wasn’t being comprehensively implemented by other marketing channels. Equipped with these insights, GroundTruth employed the following tactics to reach brand loyalists and drive them to the participating restaurants:

​​​The campaign was innovative in that ROI was measured by offline performance—driving visits into participating restaurants, a new KPI for many marketers that allows you to measure real-world impact. Additionally, GroundTruth’s team also had to successfully juggle four separate national restaurant campaigns, all of which had differing creative concepts, contrasting promotions based on geographic location, and different campaign flight dates.

GroundTruth was able to successfully drive diners into the four participating restaurants and support the Dine initiative, helping kids receive meals when they otherwise would be without. The program helped No Kid Hungry target brand loyalists, providing a consistent, incremental flow of donations.

The month-long campaign generated 129,000 visits, which helped contribute to the $1.3 million raised by the four participating restaurants. Jack in the Box raised the most donations with $500,000 and Habit Burger came in a close second with $449,710 and an offer redemption rate of 47%.

The Location Audience strategy performed the best with a 0.31% Click Through Rate and a 3.56% Secondary Action Rate that includes clicks for directions or more information, which is higher than the 2.50% - 3.00% industry benchmark. Within one month of location marketing, GroundTruth’s campaign had a 0.86% Visitation Rate which is 3X higher than the 0.20% standard for QSR clients.

According to Susan Karlen, Sr. Manager of Partnership Development, Dine, No Kid Hungry, “Mobile and location targeting were new additions to the Dine campaign for No Kid Hungry, and the GroundTruth team was so helpful in providing a solution that uniquely addressed the opportunities our partners were seeking to accomplish. It was wonderful to be able to offer this to our generous partners and see the measurable impact it delivered for their fundraising and business goals.”