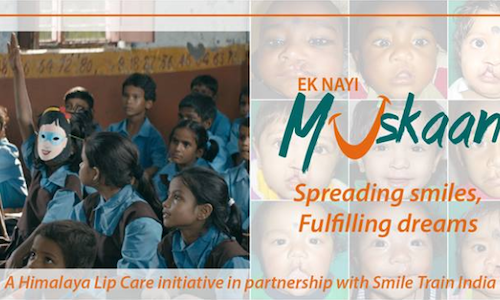 Himalaya is one of the leading brands in the lip care category. As a brand, Himalaya Lip Care understands that lips are the conduit to the expression of one’s emotions and confidence. Hence, the core objective of the brand is to ensure healthy and nourished lips for all.

With this intent, in 2015, Himalaya Lip Care launched a corrective cleft lip initiative - Muskaan in association with Smile Train India. Smile Train is an international children’s charity with a sustainable approach to a single, solveable problem- cleft lip and palate. Cleft lip and palate is a common birth defect that is caused by the improper fusion of facial tissues during fetal development.

One in every 700 children is born with a cleft lip and/or palate globally. In India, it is estimated that over 35,000 children are born with clefts, every year. Many children continue to live with untreated clefts due to challenges of awareness, accessibility and affordability.

With over 5.98 Crore people under BPL, very few can afford the corrective surgery. Also, there is a lack of awareness about the treatment. Hence, the focus of the campaign was two-pronged:

1) To spread awareness about cleft and palate treatment.

Children with untreated clefts have problems in basic means of living like eating, speaking, and breathing, and are prone to frequent ENT infections. Less than 50% of cleft children get treatment due to ignorance and poverty in India. The treatment of cleft is hampered primarily due to unawareness and unaffordability. Hence, there is a compelling need to create awareness that a cleft condition can be corrected through a simple 45-minute surgery.

Thus, the focus of #EkNayiMuskaan was to educate people about cleft-corrective surgery and how a simple 45-minute surgery can make a big difference in a child’s life.

In order to create awareness, we devised a 360° campaign including digital, TV, radio, print, outdoor and PR. We created a heartwarming digital film “Ek Nayi Muskaan” to highlight the impact of the life-changing cleft surgery.

#EkNayiMuskaan believed in the power of storytelling and portrayed the story of Munmun, an 8-year-old girl from Barabanki, Uttar Pradesh, born with a cleft lip. She kept herself in hiding, due to her condition, even in her dreams. The film brought alive the emotions and aspirations of Munmun and how she got her first real smile post-surgery that gave her the promise of a better life.

The digital film was promoted on YouTube and across digital avenues. We created a campaign microsite that hosted the digital film and tracked live conversations across social media. Traditional media channels like TV, Print, Radio and Outdoor were smartly employed to complement the digital campaign. Further, Himalaya extended its in-house Customer Care service to support queries regarding cleft and identification of patients.

This nation-wide initiative garnered a reach of over 10 million across digital media forums, Munmun’s film touched over 3.2 million viewers digitally, and over 1 million people engaged with the campaign. A staggering reach of over 7.5 million was seen on Twitter alone, with an impression count of over 27 million. The campaign amassed a reach of over 110 million through over 200 press coverage and the traditional media drivers – TV, Radio and outdoor.

The campaign helped identify 500+ cleft patients in a span of 45 days.