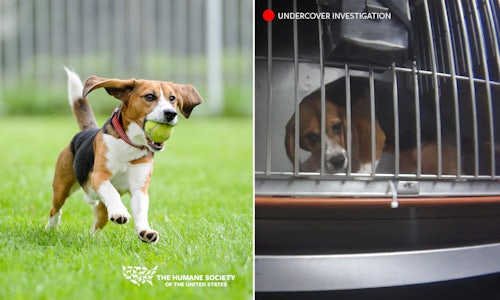 It’s hard to imagine a dog just like the one you love at home being force-fed pesticides, his chest opened and flooded with toxic substances. But scenes like this play out every day at animal testing laboratories around the country. Many labs test on beagles because of their gentle, trusting dispositions. We wanted to expose this practice.

Our 100-day undercover investigation into one of the world’s largest contract research organizations exposed an unnecessary pesticide test being carried out on a group of beagles by Dow AgroSciences (now Corteva Agriscience). The EPA no longer requires this specific year-long test; Brazil was the only country in the world still requiring it. We wanted the public to know this was happening and to save the dogs who would be euthanized at the end of the study. Behind the scenes, we worked with the Brazilian government to end the test.

The Humane Society of the United States and Humane Society International launched this global campaign in March 2018 with the release of our undercover video. Multiple channels—email, our CEO’s blog, Facebook (post, live and stories), Twitter, Instagram (post and stories), SMS, press releases, our website and our member magazine—shared the story, with a simple call to action: Ask Dow to release the 36 beagles still living at the time we went public.

Public outcry and pressure were key to convincing Dow to release the dogs. We couldn’t just rely on our HSUS and HSI supporters, though: We needed a groundswell of support from everyone who loves animals and believes dogs belong in a home, not a lab.

When we released the investigation and launched our campaign, our supporters were outraged. They took action by signing our petition or calling Dow directly to demand that the dogs be released for adoption. We included a simple follow-up request: Share this story with your friends and family. People happily did so, and the story quickly spread.

We built on the initial momentum by sharing character stories, making this abstract, overwhelming issue personal. Harvey—a sweet beagle from our undercover video who was ultimately euthanized—helped provide a face for the issue. His story—how he was implanted with large devices and covered with surgical scars—let us speak about the broader issue of animal testing, how we’ve seen dogs cowering in their cages, being force-fed or infused with drugs, pesticides and other products, using crude methods that have no relation to how a human might ingest a substance. We’ve seen dogs undergoing invasive surgeries or having their jaws broken to test dental implants. All this while more humane methods exist and while an estimated 95% of drugs—including those tested on animals—fail in human clinical trials. When the public learns about these unnecessary tests, they rightly want them to end.

Our messaging and visuals provoked conversation on social media. We boosted our best-performing pieces to gain traction, and we had our affiliates’ and campaigns’ Facebook pages share the story with tailored angles that fit their core audience. Media coverage bolstered our support and broadened our audience. As the number of signatories on our petition grew, Dow couldn’t ignore the outcry.

Hundreds of thousands of animal lovers spoke out—and Dow listened. Rather than euthanize the surviving dogs, Dow released them to Michigan Humane Society, one of our shelter and rescue partners. From there, the beagles were adopted into loving homes, and we’ve been lucky enough to hear from many of their adopters that they’re thriving.

Brazil granted a waiver that allowed Dow to release the dogs, and in August, the country announced it will no longer require this pesticide test.

Just as importantly, we’ve educated a new audience about the unnecessary, cruel toxicity and cosmetics testing carried out on animals nationwide. More than 75% of our petition signers were not current HSUS members—they’re new supporters, yet still willing to take action.

Of course, the story doesn’t end with Dow. We are committed to ending unnecessary tests and to promoting nonanimal alternatives. That work goes on. There are signs of hope, however: In September, the EPA announced a move to phase out animal testing by 2035. And for many of the beagles used in this test, there’s a happy ending.

Here are a few of our results by the numbers:

Video for Saving the Dow Dogs 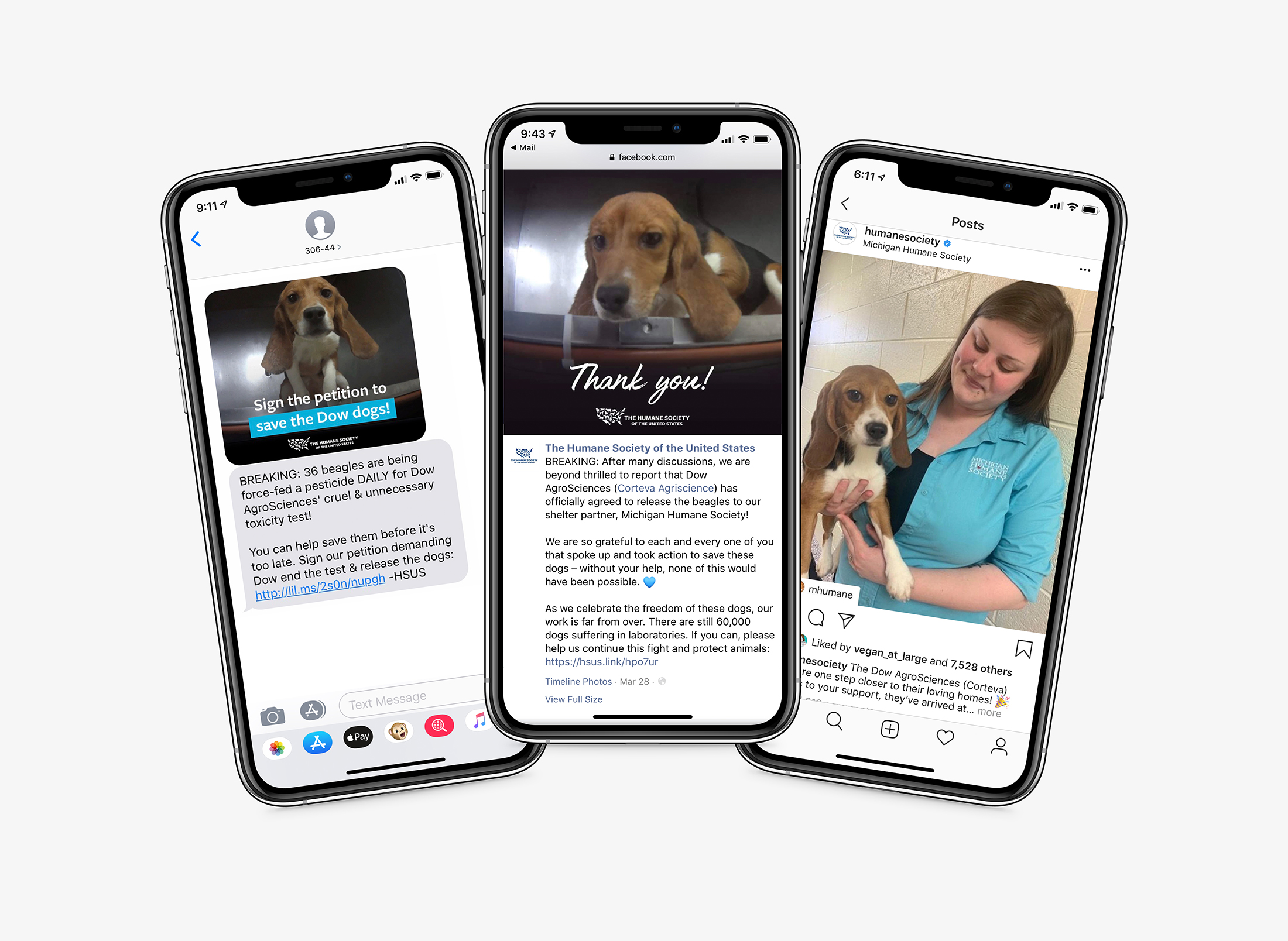 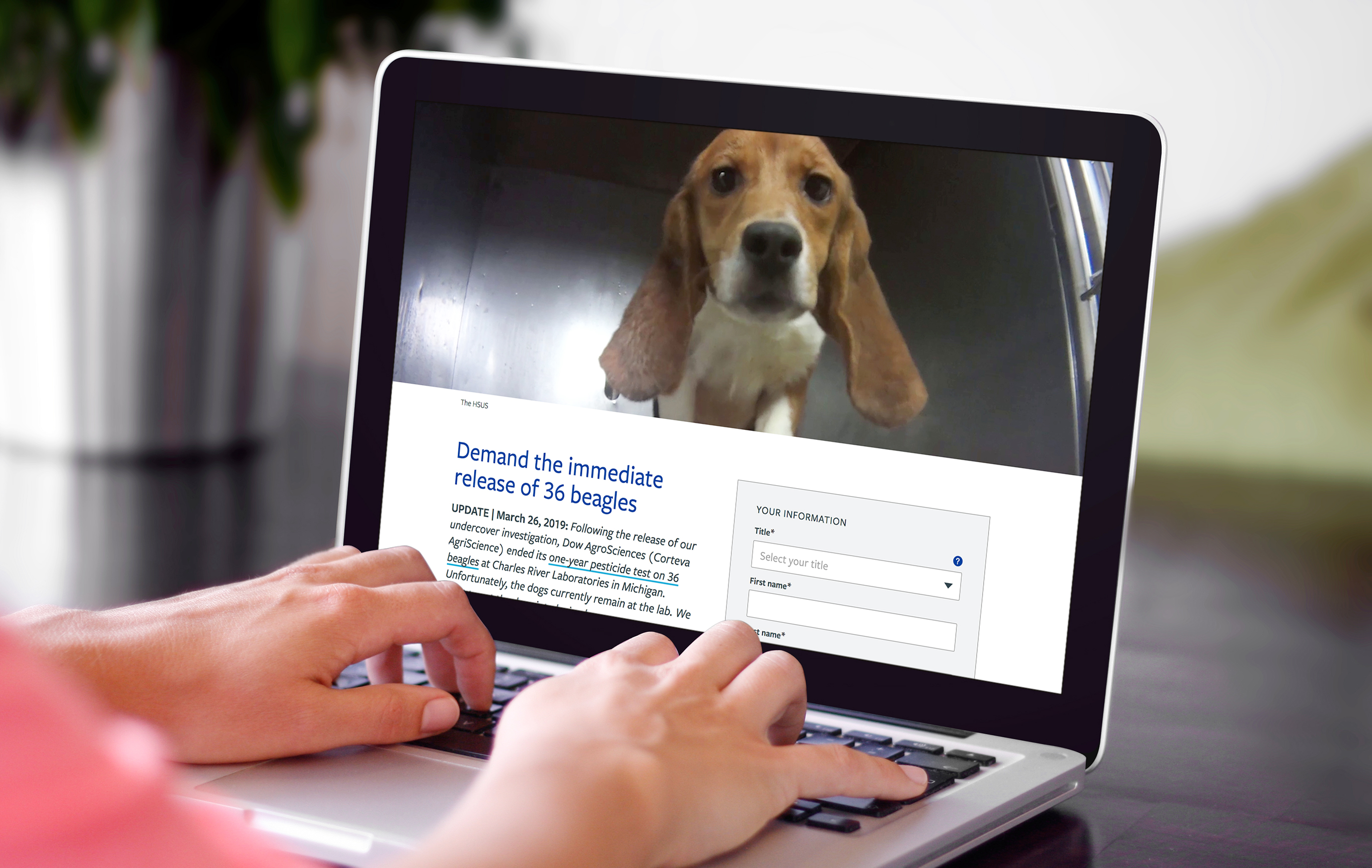 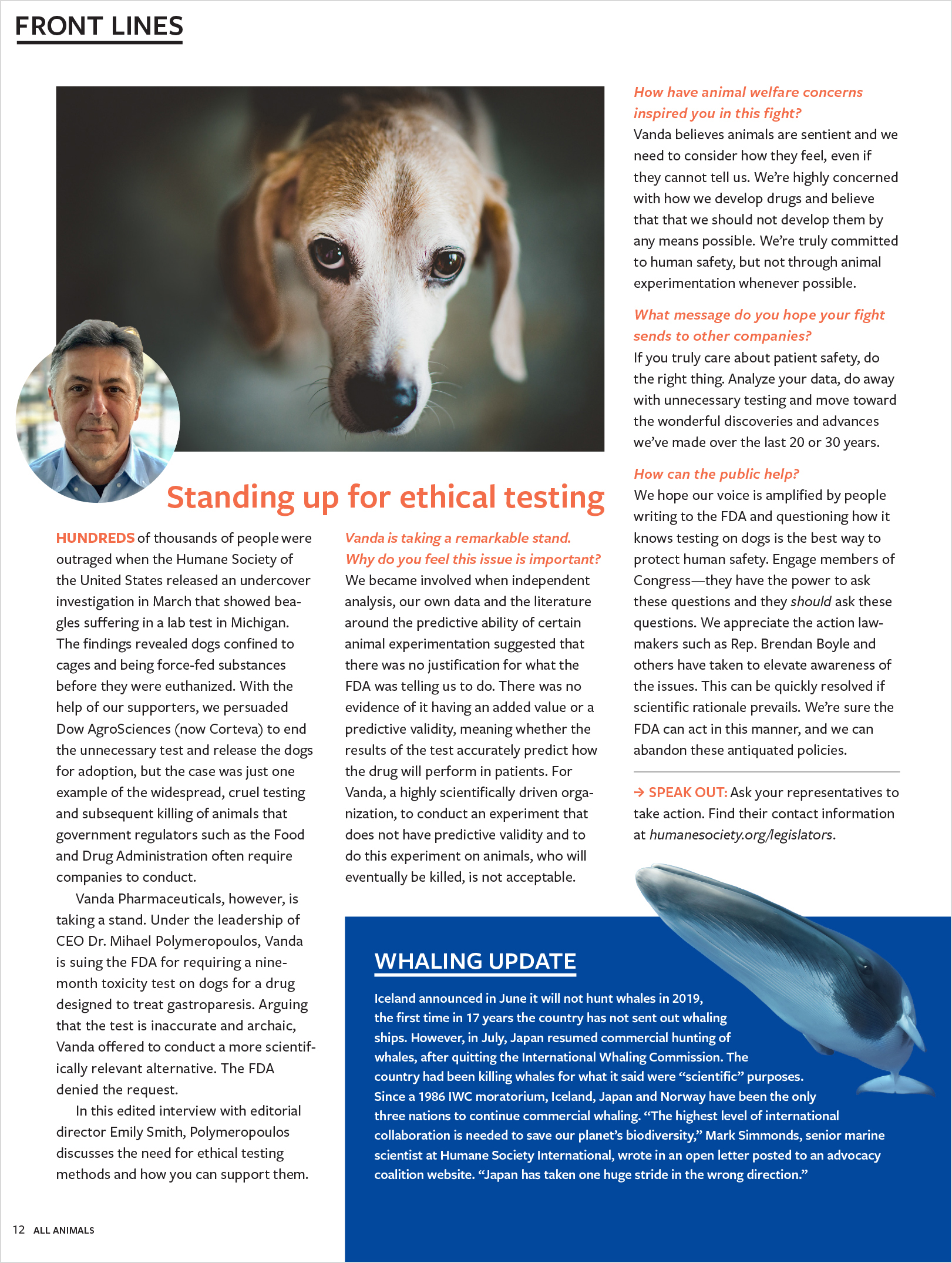 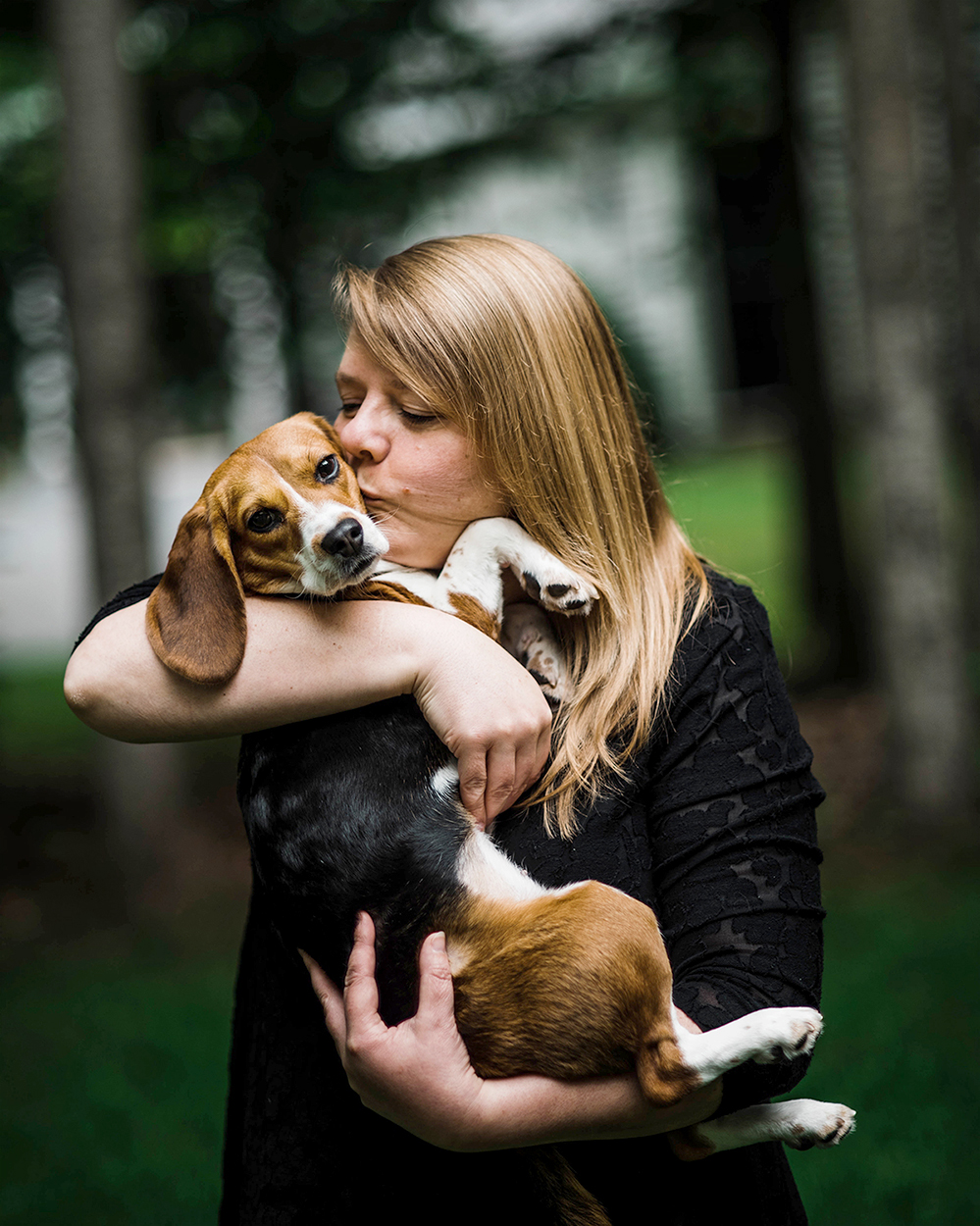 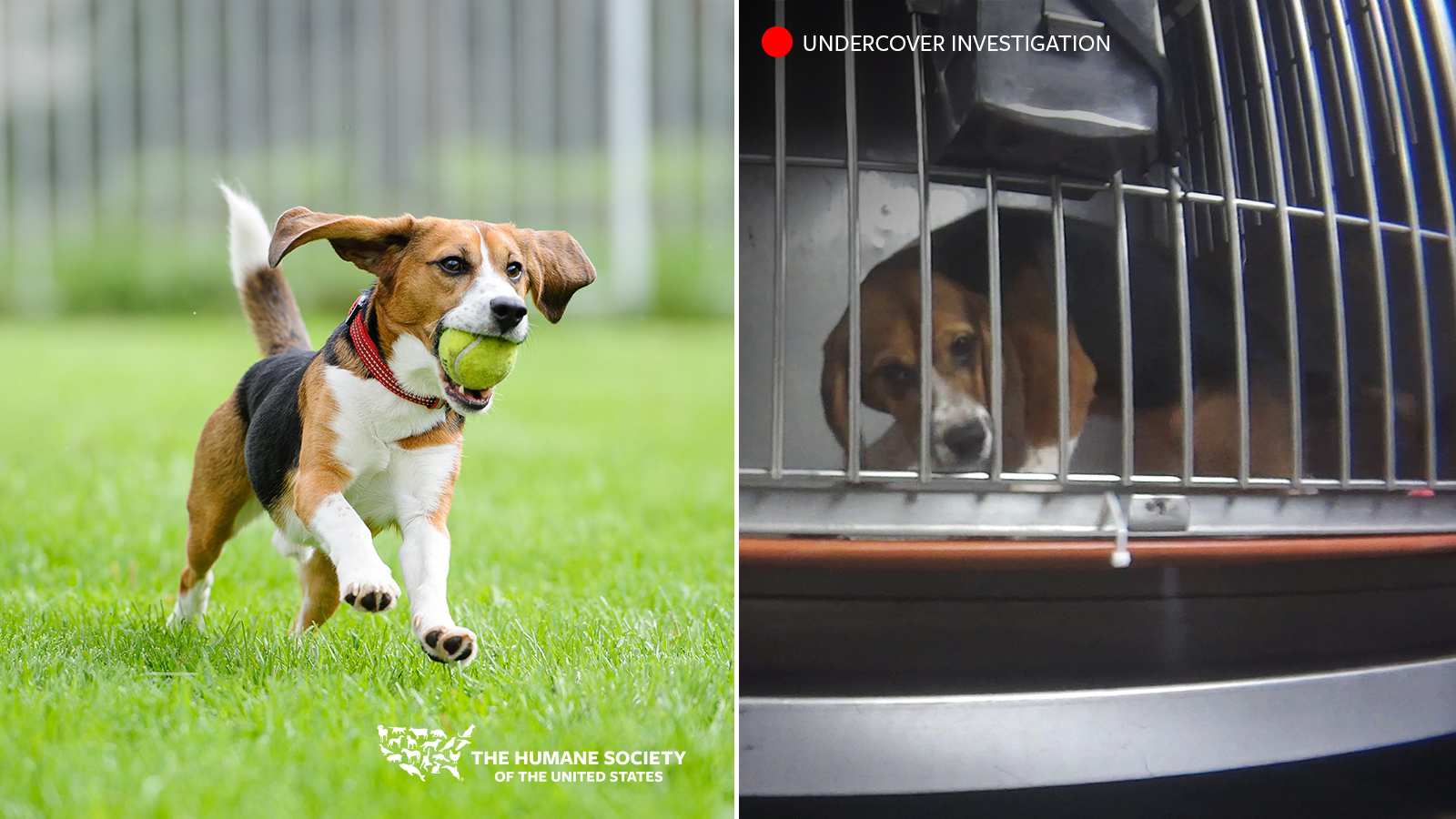 The Humane Society of the United States