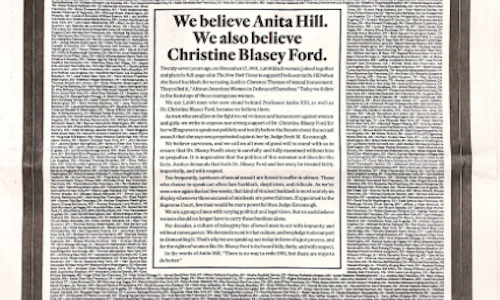 In 1991, in a powerful display of solidarity during the Clarence Thomas hearings, 1,600 black women came together to place an ad in The New York Times to support Anita Hill. During the Kavanaugh hearings in 2018, the Phenomenal Woman Action Campaign organized 1,600 men to follow in the footsteps of those courageous black women, by taking out another full-page ad in The New York Times in a show of male allyship and solidarity with Dr. Christine Blasey Ford. This ad looked to make a bold statement that male allies stood with survivors and that their stories of sexual harassment and assault were treated fairly and without bias or prejudice. With a goal of obtaining 1,600 signatures, Phenomenal Woman ultimately garnering over 13,000 signatures, far exceeding their initial goal. Additionally, in order to secure the ad space in The New York Times, Phenomenal Woman crowdfunded over $130,000 from supporters across the country. The money that was not needed to purchase the ad was donated to Futures Without Violence.

Phenomenal Woman has been supporting women and other underrepresented communities since its inception in 2017 as a grassroots movement empowering everyday people to make positive change in the world. Through online, offline, and e-commerce engagements, Phenomenal Woman works to build a strong, intersectional community of women committed to taking action, no matter how small.

The 1600 Men campaign was a unique campaign from start to finish. With only one weekend to create, fund and publish the ad, Phenomenal Woman utilized community organizing skills to obtain signatures from personal networks while simultaneously fundraising. From there, the campaign grew exponentially as momentum was building for taking action around the hearings. Alongside their non-profit partner, Futures Without Violence, Phenomenal Woman partnered with design firm Godfrey Dadich to create the ad. Godfrey Dadich generously volunteered countless hours and worked through multiple nights to expertly format all 1,600 names so that the ad resembled the original one from 1991. In the end, Phenomenal Woman’s ability to organize efficiently and stay true to their cause is what created a successful campaign. It was a labor of love and resistance from an entire community of ordinary people who wanted to make an extraordinary difference in the aftermath of the 2016 presidential election.

Through this ad, Phenomenal Woman showed the power of solidarity and allyship and made a bold statement that women should no longer have to carry these burdens alone. The ad drew public attention to the fact that, too frequently, survivors of sexual assault are forced to suffer in silence — and that, for decades, a culture of misogyny has allowed men to act with impunity and without consequence. By placing an ad in a major outlet like The New York Times, the campaign elevated the voices of male allies who demanded an end to that culture and spoke out in favor of women’s rights. The 1600 Men campaign also demonstrated that Americans from all backgrounds can successfully come together and support a common cause for social justice, women’s equality, and direct action. The ad made a significant impact, garnering over 13,000 signatures and 15.1 million impressions from the hashtag #1600men. The campaign also exceeded its fundraising goal within the first day, with all additional funds going to violence-prevention non-profit Futures Without Violence. 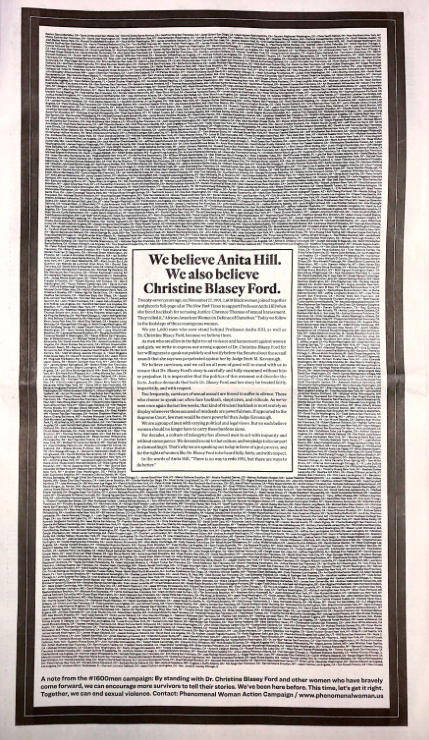