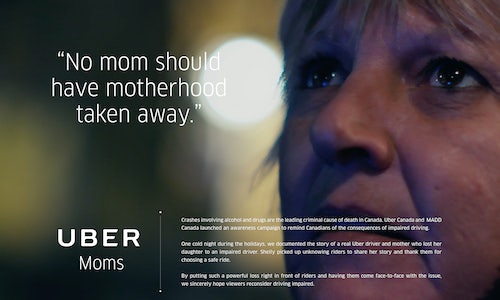 In Canada, over a third of road fatalities involve alcohol, more than in any other developed nation. Uber, in partnership with Mothers Against Drunk Driving (MADD), asked us to apply the disruptive thinking they are known for to address this unacceptable fact.

Our campaign had two objectives. First, reduce impaired driving in Canada by raising awareness of the issue and promoting the decision to choose a safe ride, and second, develop a donation stream for MADD Canada to raise much-needed funds, with a goal of $100,000.

Seeing such high rates of impaired driving, Canadians had clearly become desensitized to the familiar arguments. People believe they're immune to these possibilities or they're detached, assuming tragedies happen to other people. So, we framed the issue in a universal and emotionally intimate way as the loss of motherhood. The impact of an impaired driving death is magnified when, instead of affecting a nameless stranger, it's a tragedy that happens to a mother.

During creative development, we wondered if there might be a mother among Uber drivers who had lost a child to impaired driving. That question led us to Shelly, a remarkable woman whose oldest daughter died tragically 17 years ago. We rode along with Shelly one night as she picked up people from festive celebrations at local bars, capturing her conversations with riders about doing her small part to get people home safely.

The Uber customers who made their way home with Shelly experienced powerful and highly personal conversations that made the issue of impaired driving very real for them. But to bring the idea to its full potential, we turned the footage into a powerful video that would run in social media during the holiday season.

To enable much-needed fundraising for MADD, the final component of the campaign leveraged a mechanism within Uber's app: The Compliment badge. Its usual purpose is to give Uber drivers added recognition for great service, but throughout the month of December, it was rebranded as the Late-Night Hero Compliment badge. Each time a rider complimented a driver with a badge, Uber donated $1 to MADD.

Shelly's Story was shared on MADD's and Uber's social media channels. Uber and MADD leveraged their database of riders and drivers to share the message through email, web landing pages and in-app cards. An Uber-MADD joint press release was shared with trade press.

Bringing people face to face with the impact of impaired driving through the story of one woman's incredible commitment proved to be as powerful as it was poignant.

Shelly's Story was seen by over half a million viewers throughout the holiday season, a period when the message is especially needed.

Our fundraising goal was achieved in less than three weeks, 11 days ahead of target. 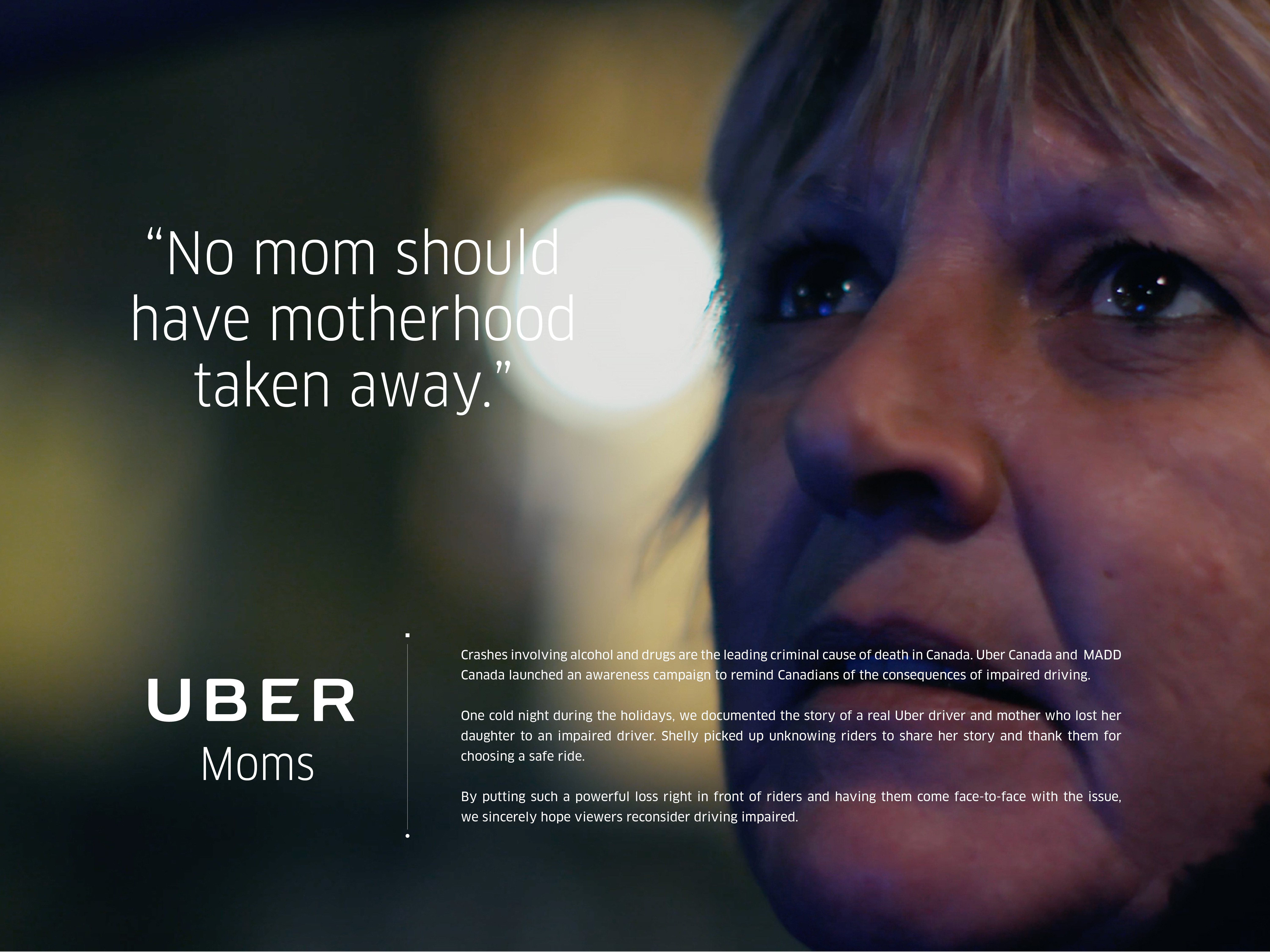