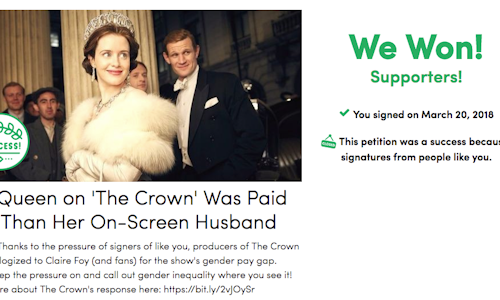 Earlier this year, Suzanne Mackie, a producer on the Netflix' hit series "The Crown," publicly let it slip that the show's leading actress was paid less than her male counterpart.

Following Mackie's comment, an online petition promptly went public on the Care2 platform, asking Netflix and Smith to donate the difference in their paychecks to the TIME'S UP Legal Defense Fund. The petition drew significant media attention, after garnering tens of thousands of supporters within days.

Up to now, the topic of salary parity has been periodically bubbling up in Hollywood. Back in February 22, 2015, Patricia Arquette made a passionate pitch for wage equality during her acceptance speech at the Oscars. Fellow nominee Meryl Streep voiced her support. However, the buzz died down soon thereafter and a larger movement failed to gather steam.

However, amid the growing #MeToo movement more women (and men) than ever, from across industries, are speaking up on topics ranging from harassment and pay inequality. "Time's Up" is a Hollywood-born sub-movement against sexual harassment, founded on January 1, 2018 by celebrities in response to the Weinstein effect and #MeToo. In its year of infancy, it is critical for Time's Up to stay in the spotlight and gain steam. Public awareness and media attention will help hold responsible parties accountable and keep the momentum going on this important, rising social movement.

Petitions are one of the oldest forms of advocacy work and continue to have real sway with decision makers. Online petitions, meanwhile, sometimes go viral. And when they do, media coverage and the attention of industry leaders often follow.

Upon creation, "The Crown" petition was picked up and optimized by Care2's veteran campaigners. With this extra attention, the petition would have a better chance at catching more eyeballs quickly, while the issue was still hot. Within days, over 46,000 people had signed on.

Care2 then teamed up with New York-based PR agency Unbendable Media to ensure this timely petition caught the idea of major media outlets, particularly in the entertainment space—where it was most relevant. The petition was pitched out immediately to targeted reporters and editors.

The rapid, integrated approach worked, and the result was a flurry of media attention. The petition/campaign was featured prominently in outlets including The Hollywood Reporter, Variety, People Magazine, Teen Vogue, Yahoo! News, and many other outlets. Rebecca Gerber, Care2's Senior Director Engagement, stepped into a spokesperson role, taking incoming media interviews about the petition and representing the collective voice of the concerned signers.

Soon, Claire Foy herself addressed the controversy in an interview with Entertainment Weekly on March 23. The actress said she wasn't surprised that the news of her pay disparity became a big story, and suggested it was an important topic that should resonate with the concerned public. Co-star Matt Smith also spoke to the media, showing his support for equal pay via Page Six: "She's the queen for God's sake. It's ridiculous," he stated.

In total, the story generated over 670 million earned media impressions globally. As hoped for, this explosion of media activity sparked by the online petition caught the attention of the industry leaders involved.

On March 20, within days of the petition launch, Left Bank Pictures, the production company behind "The Crown," issued an official apology to both Claire Foy and to Matt Smith, stating that it was "absolutely united with the fight for fair pay, free of gender bias." The production company also stated that it would be taking concrete steps to address the gender pay gap issue for women "in front of the camera and … behind the scenes."

A little over a month later, Left Bank announced that Foy would receive $275,000 in back pay for her role in "The Crown."

While most don't make nearly as much as a movie star like Claire Foy, every time a public campaign like this ends victoriously, it sends a signal of empowerment for all women. Claire Foy was the star and namesake of "The Crown." If she can't get equal pay—what other woman stands a chance? 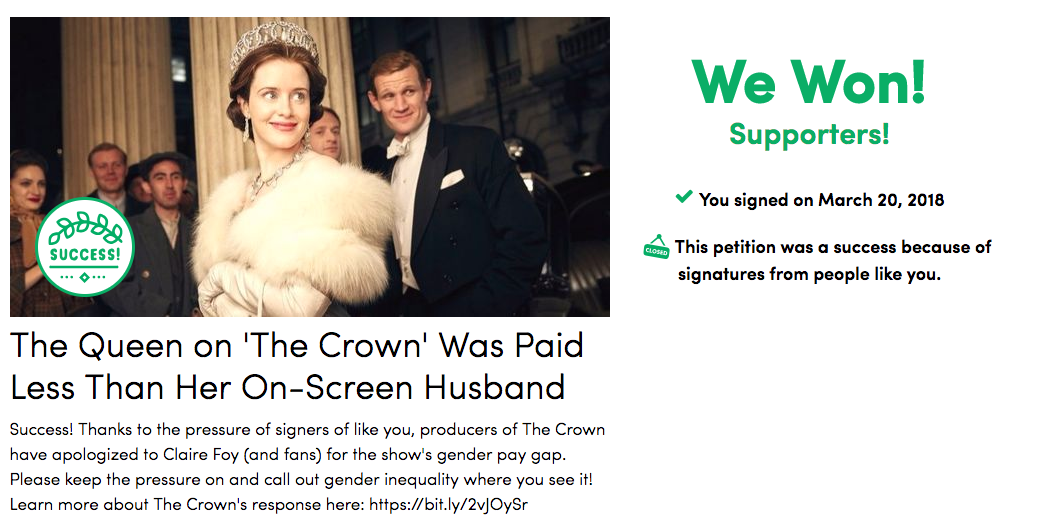