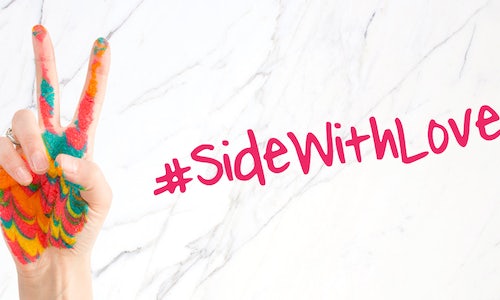 After the extreme negativity of news during the summer of 2017, the team at Baked by Melissa wanted to do something to help spread love and positivity throughout our nation. The idea began at night after a spur of the moment phone call between Melissa and the company's CEO, Seth Horowitz. A brainstorm was set with the larger group for the next morning and within one day, the idea for Side with Love had been born. Baked by Melissa would give away 100,00 cupcakes! Anyone in the US could send a gift box of 25 bite-size cupcakes absolutely free of charge to surprise anyone they wanted, with the goal to encourage simple acts of kindness. While the hope was for people to enjoy the cupcakes, even more than that, the company wanted to also inspire people around the country to spread some kindness of their own.

Since Baked by Melissa decided to launch Side with Love within 48 hours of finalizing the campaign, the company acted quickly to get the word out. It was an all hands on deck effort to make sure as many people were aware of what was going to happen. Baked by Melissa utilized its social media channels, e-mail newsletter, PR, and website to let people know about Side With Love.

Baked by Melissa knew that this campaign would drive far more concurrent users to its website than it was used to handling, so a plan was crafted to virtually place people in line to avoid a potential crash. The company utilized Queue-It, a virtual queue system to ensure customers had a positive experience while waiting to place his or her order. Baked by Melissa also had to ramp up production and shipping at its main bakery to fulfill all these special orders, in addition to the normal business of the week.

Baked by Melissa was touched by the overwhelming support of the Side With Love initiative and decided to increase how many cupcakes it would give away. The company spread love across the nation by sending 150,000 cupcakes throughout all 50 states and over 1,000 cities to thousands of people. It was the most trafficked day ever at bakedbymelissa.com, with an over 1000% increase in website transactions compared to a normal day. Press outlets such as AM New York, Delish, Elite Daily, Eater NY, Spoon University, and Time Out New York featured the campaign. Side with Love also received social media support from AOL Build, Elvis Duran, @foodbabynyc, @nycfoodgals, @coffeeandchampagne, and @eatingwithminnie.