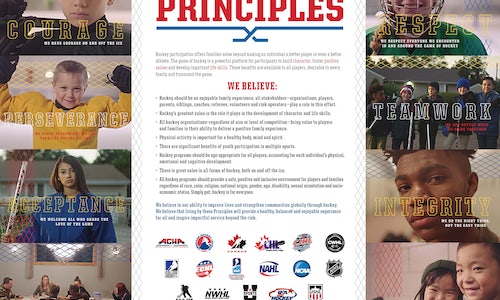 94% of kids playing high school sports will never play at the collegiate level. Of those that do, only 1-2% will make it to the pros. Yet, many parents and coaches continue to push kids with unrealistic expectations. For kids, this has taken the fun out of youth sports. As a result, youth sports are facing a decline in participation across the board.

But those that love the game of hockey know that hockey is different. Hockey teaches teamwork and perseverance. It instills integrity and a sense of humility. It strengthens character and brings communities together.

Declaration of Principles aims to focus on creating better people and stronger communities – not just better athletes. It's a proclamation of the values inherent and authentic to the sport of hockey. Key pillars like access to the game, the importance of diversity and inclusion, valuing all members of the community, and the need for individualized, age-appropriate programming form the bedrock of the Principles.

Developed by the NHL, NHLPA, and 15 other influential governing bodies in the sport across the world, the Declaration of Principles is a vision statement for the future of hockey. The first of its kind in professional sports, the Principles unite the hockey world — across professional, amateur and youth ranks — under one mission: to deliver a positive hockey experience for all players and families by holding firm to the belief that the true value of the game is its power to strengthen character and teach life skills that transcend the game.

The Principles were announced on September 6, 2017, which prompted hockey organizations across the globe to review the way the game is taught and communicated to all key stakeholders, and to adjust to align with the Principles. The NHL also created tangible programs, assets and resources for and with organizations, to demonstrate ways we can bring the Principles to life. Below are some examples:

-Website launch: www.thisishockey.org was launched where hockey stakeholders, fans and anyone interested can learn more about the initiative, find resources and take a pledge to develop, promote and support positive change in the sport's culture.

-Pledge: "We believe in our ability to improve lives and strengthen communities globally through hockey. We believe that living by these Principles will provide a healthy, balanced and enjoyable experience for all and inspire impactful service beyond the rink.

-TV spot: 'Thank You, Hockey' – produced by The Vault, NYC – was released online and ran through the 2017-18 hockey season on external broadcast platforms -- NBCSN in the United States and Sportsnet in Canada – as well as platforms of the 17 stakeholder organizations.

-Poster: A unique downloadable poster with the Declaration of Principles Pledge was created in 10 official languages to encourage worldwide participation.

-Principles in Practice (January 2018): A pilot program in partnership with the Tampa Bay Lightning High School Hockey League that engages the coaches, parents and participants in a dialogue about how to improve the youth hockey experience for everyone. It also introduced Practice Plans that use the sport of hockey to teach life skills through "teachable moments" in the sport. The key learnings will be shared with all hockey organizations.

-Declaration of Principles Summit (January 2018): A thought leadership summit where ideas were exchanged by subject matter experts on three key topics: athlete activism, diversity & inclusion, and the teachable moments of hockey. The key learnings will be shared throughout the sports community.

It's clear that the Declaration of Principles is a first-of-its-kind stake in the ground. The impact is seen in its engagement, adoption and implementation across the hockey world. Some of the many highlights include:

-Over 800,000 views and over 2.1 million impressions on Social Media within first two days of the launch

-Declaration of Principles poster downloaded in 10 languages across the world

-The Principles are now introduced to over 30,000 children in the US and Canada through the Learn to Play program

-The broad impact of the program really comes across in a letter the NHL received from Pope Francis himself, which stated: "his Holiness trusts that [the Declaration of Principles] significant gesture will inspire greater appreciation of the pivotal role played by sports and sportsmanship in training future generations to pursue personal excellence and to promote the spiritual values of teamwork, solidarity and mutual respect so necessary for the building of a more just and fraternal world."

-In Congress, Representative John Katko (R-NY) officially submitted the Declaration of Principles into the Congressional Record, noting: "It is my distinct honor to recognize hockey's Declaration of Principles, and thank the National Hockey League, the National Hockey League Players' Association, and all groups involved in this declaration for their continued dedication to the improvement of Hockey, and by extension the lives of millions of Americans who watch, play, and love the sport."

Video for Hockey’s Declaration of Principles 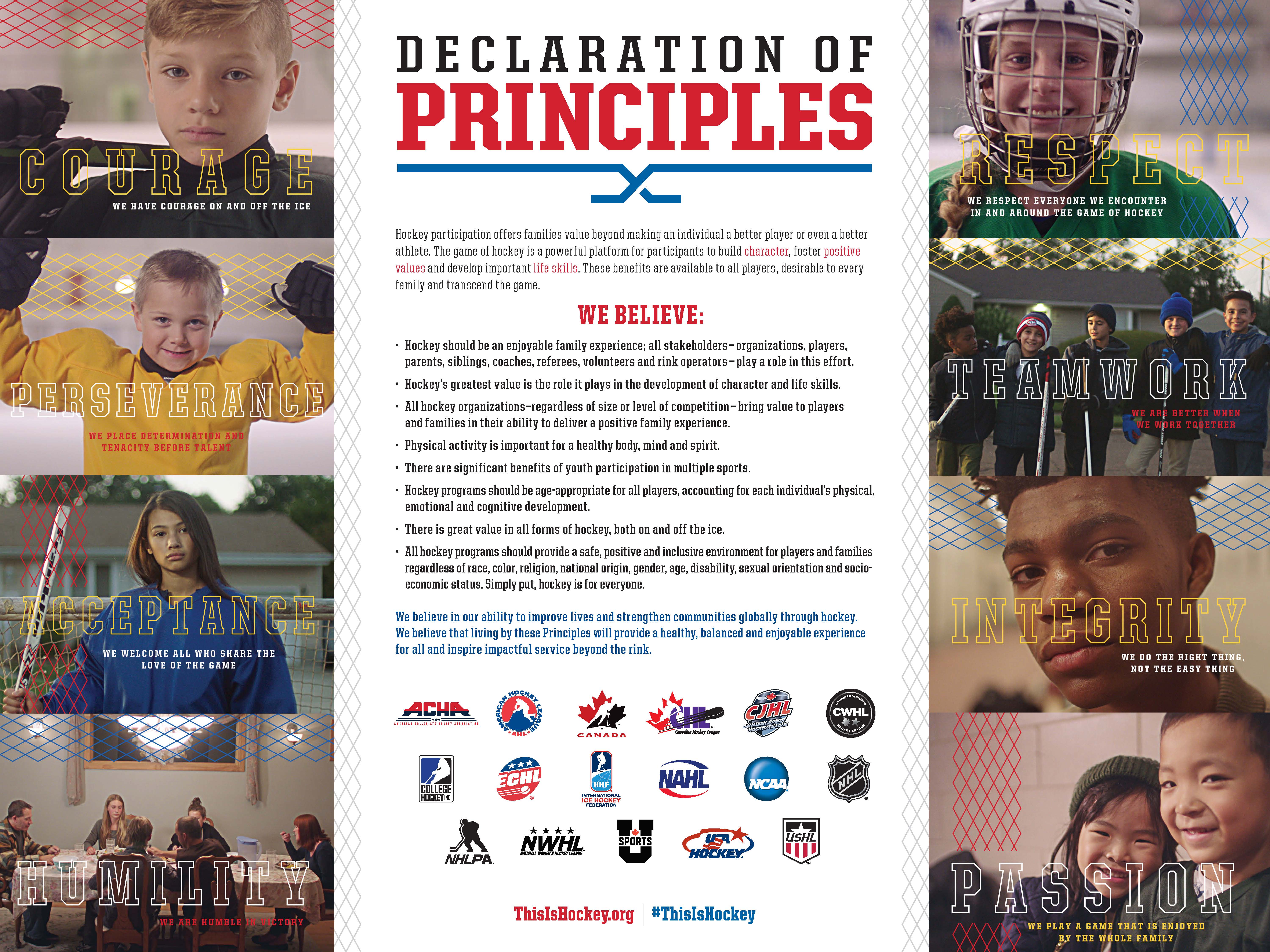 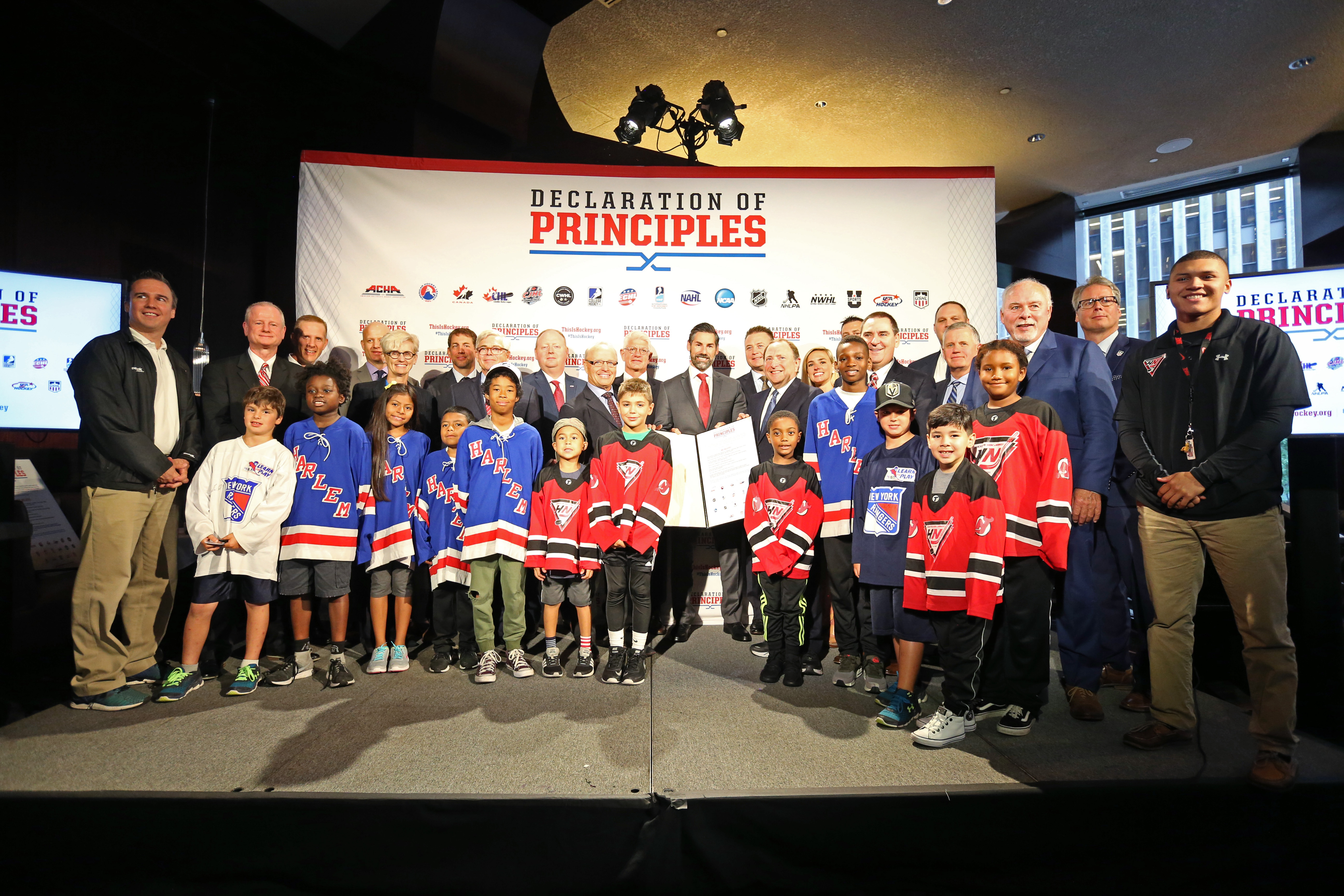