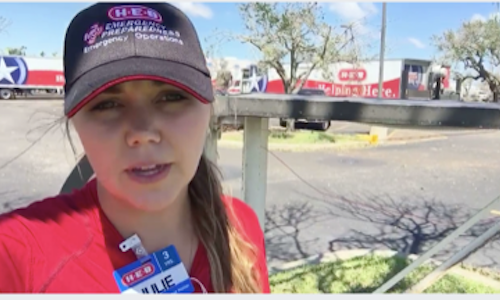 H-E-B is more than just a grocery store - it's a pillar of the community in Texas, and exists to make the lives of Texans better. As part of that mission, their Disaster Relief program has helped hundreds of thousands of Texans over the years. For years, H-E-B's Disaster Relief Units have served hot meals as well as providing showers, supplies, and mobile pharmacies to natural disaster areas. When Hurricane Harvey was on the horizon, H-E-B's Disaster Relief Units were prepped and ready to serve thousands of meals per hour to Texans that may be in need. But in the wake of a natural disaster of this scope, how would the areas affected know where they could go to get a hot meal, a bag of ice, and some sense of relief and comfort? Enter H-E-B's social media team. Our goal? To make sure that we continued our company's mission to take care of Texas - and let our communities know where they could count on seeing a friendly face, getting a warm meal, and knowing just how their H-E-B was helping their community rebound from Harvey. And because in a natural disaster, people are removed from their homes and habitats (but in 2017 not their cell phones), H-E-B made sure that we got information to those who needed it most in a way they were sure to get it - through Social Media.

From the moment that the mobile kitchens and disaster relief units left the San Antonio H-E-B headquarters, H-E-B took to the internet to share information about where the kitchens were going, what our community could expect, as well as what stores were open or closed in their communities. For many Texans, having Television was out of the question - Social Media was where they were going to find all information. H-E-B's strategy was to keep our community updated on current happenings through Twitter, Facebook and Instagram - answering customers, providing store closure information, and providing daily (or multiple times daily) updates from the road on where they were with the Disaster Relief Units.

What made the work unique was that the Social Media team was operating as part of the entire Emergency Operations Center - and had up to date information going out to our community - whether it was via social response and answering customer's questions on what was happening in their area, or by letting people know where the mobile kitchen was headed next. By doing this, the Social team was also able to find and assist with incidents such as when customers seeking refuge broke into a store that was closed. Using Twitter, their friend had alerted H-E-B that adults and children were inside the store and needed help - and the social team was able to work quickly with Security to find transportation for the individuals in need to safety.

Having the Disaster Relief Units were always part of H-E-B's response plan, but the Social Media integration was new with Harvey. Having a Partner (what H-E-B calls employees) on the ground with the trucks sending in video footage daily provided H-E-B a way to connect with their community and provide them up to date information on where they could find a hot meal next. It also gave the community something to rally around, with hundreds of thousands of comments on each video and update posted. There wasn't much for Texas to look forward to during Harvey, but H-E-B's presence in the community, and social messaging, provided a beacon of calm for those in the midst of a true storm.

Additionally, H-E-B was able to use their boots on the ground social strategy to let those most in need find out about information. Days into the storm, the city of Beaumont, Texas called H-E-B and asked how H-E-B could help get their citizens water - they lost their tube pumps and the city was surrounded by floodwater. They lost all water pressure, and had reached out to local government to help them - but the timeline given wasn't acceptable to the city. H-E-B took on the challenge and sent tankers and tractor-trailers of water, and got those on the road and into Beaumont when nobody else could. The Social team worked with the VP of Transportation to provide a video update so that in real time, the city of Beaumont could know where to get water.

Our social media posts, video diaries, and updates reached over 25M Texans - almost as many who live in the state. The disaster relief commercial made the Advertising Age Viral Video chart with over 10M views on Facebook, Twitter and YouTube, generating hundreds of thousands of dollars raised at stores across the state to help those in need. In total numbers across the country, there were 38M views of Harvey videos produced by H-E-B, 600M people reached with H-E-B tweets and mentions and 21M people reached on Facebook and Instagram with updates of where the Disaster Relief Units were.

Social Media was used to communicate that H-E-B was in the corner of Texans, and bringing them needed supplies and friendly faces. It's what H-E-B knows how to do, and by using a real-time response platform, we were able to get information to those in need when they needed it most.

Video for H-E-B and Hurricane Harvey 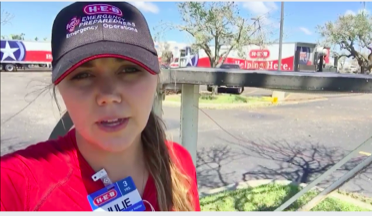