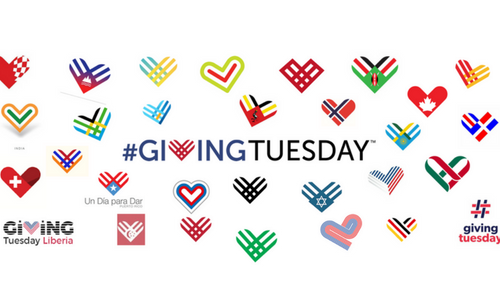 #GivingTuesday: One Day to Make a World of Difference

We are building the biggest philanthropic movement in history. We are a team of millions, representing all faiths and political views, working in dozens of countries.

#GivingTuesday was born on the heels of Black Friday and Cyber Monday, two days dedicated to shopping and getting the best deals. We saw an opportunity for a day focused on giving. People everywhere proved us right.

#GivingTuesday leverages social media and a broad network of nonprofits, schools, businesses, and individuals to ignite a movement and global call to action to give. It has seen record-breaking engagement at every level of society - from some of the world's biggest celebrities and influencers to students, volunteers, and everyday givers.

Last year alone, online giving on #GivingTuesday surpassed $350 Million in the United States. With activities reported in nearly every country and territory, #GivingTuesday is becoming the first major global holiday that unites people across languages, borders, cultures, and traditions, and all for one common goal: to do good.

#GivingTuesday is so much more than just a giving day. It's a global movement that encourages and empowers participants to make it their own. There are no rules about our brand. In fact, we encourage organizations to change our logo, hashtag, and name to reflect their specific mission and goals (for example: #GivingZooDay and Dress for Success' #GivingShoesDay).

This openness and creativity has allowed participants to use #GivingTuesday as an opportunity to experiment. In 2017, 82% of participating organizations reported that they used #GivingTuesday to try something new. This innovation and learning is not just helping #GivingTuesday reach new levels; it is enhancing the capacity of organizations and the social sector as a whole.

Our open and transparent approach, combined with our emphasis on co-ownership and participation, has helped the #GivingTuesday team cultivate a network of leaders who are sharing tools, ideas, and opportunities for others to join the movement. The 92Y team serves as a backbone for this network, helping guide and empower communities around the world to take charge of their own #GivingTuesday initiative.

The first #GivingTuesday in 2012 reported $10 Million donated online in the United States alone. Last year, it was $350 Million. #GivingTuesday has also become the largest crowdfunding day in the US - the data shows that people are in fact giving more and giving more frequently (and to multiple organizations) on #GivingTuesday. This year we expect to surpass $1 Billion raised online since 2012, $100 at a time.

#GivingTuesday is not just about dollars; it's about communities coming together. In 2012, we immediately saw a dozen communities rally around #GivingTuesday. 2017 saw 100+ cities, states, and towns organize local movements (for example: #ILGive in Illinois, #GivingTuesdayCLT in Charlotte, NC, or #BigDGives in Dallas). These collaborations are also spreading well beyond the United States. With activities in over 150 countries and territories, nearly 50 of these countries have official #GivingTuesday movements (for example #GivingTuesdayUK in England or #UnDiaParaDar in Argentina). In Canada, more than 2 million people volunteered in 2016 and we learned that 227 community campaigns were organized in Russia in 2017 (even in Siberia).

As a hashtag, #GivingTuesday's online presence exceeded #CyberMonday mentions by over 21 Billion impressions. It trended all day in multiple countries, including Spain and Kenya, and has been called "the Superbowl of giving". It's on track to become the very first global day of giving.

Video for #GivingTuesday: One Day to Make a World of Difference 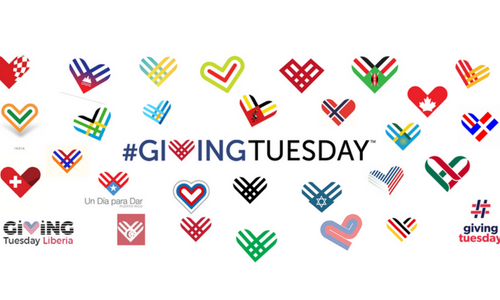