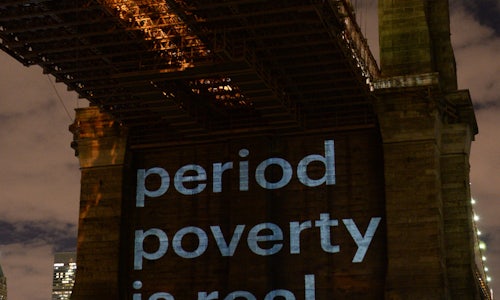 Fighting for Menstrual Equity on International Women’s Day, and Every Day

According to experts, period poverty impacts millions of people in the US and around the world, especially poor women and women who are homeless or incarcerated. Throughout the United States, marginalized people with periods, many of whom lack agency due to youth, incarceration, or homelessness, are often subjected to dehumanizing conditions in pursuit of managing a healthy and natural bodily process. Students report skipping class when they don't have necessary supplies; women in prisons often reuse the same pad for multiple days; those who are homeless resort to using brown paper bags or discarded socks. In addition to the U.S., period poverty has a real impact around the world as well: one in ten girls in Africa misses school for the duration of her period each month.

The stigma and shame surrounding menstruation only further contributes to period poverty. By talking about our periods, acknowledging that we bleed, we can normalize what is, after all, normal. Menstruation is a completely natural biological process and nothing to be ashamed of.

In commemoration of International Women's Day and its focus on reaching greater gender equality, THINX drew attention to the issue of menstrual inequity in the U.S. and around the world, and demanded an end to period poverty.

First, THINX Head of Content, Maeve Roughton, teamed up with Jennifer Weiss-Wolf, the author of Periods Gone Public: Taking a Stand for Menstrual Equity and a vice president of the Brennan Center for Justice at NYU School of Law, to pen an opinion piece centered around the fight for menstrual access and to expand gender equality in the U.S. and around the world by way of greater menstrual equity.

Second, THINX commissioned light projections with messages like, "Period Poverty is Real," and "Demand Menstrual Equity" that lit up the Brooklyn Bridge and the United Nations Secretariat building the evening of International Women's Day.

Finally, THINX teamed up with #HappyPeriod to shine a light on the needs of menstruators who are homeless or living in poverty. To commemorate International Women's Day, Thinx contributed 1,000 pairs of period-proof undies to support #HappyPeriod in expanding access to period products for those most in-need. In each of their 10 chapters across the U.S., #HappyPeriod partners with local shelters, such as Care for the Homeless and the Ali Forney Center in New York City, to directly equip people with the supplies they need to menstruate safely and with dignity.

Roughton and Weiss-Wolf's opinion piece was published in the New York Daily News on International Women's Day, drawing the attention of a national and local audience, including folks who may not have already been aware of the issue of period poverty.

Lighting up the Brooklyn Bridge and the UN Secretariat Building, two major NYC landmarks, ensured that THINX could spread awareness of menstrual inequity and help to make a local impact on New Yorkers and passer-bys who saw the projections and wanted to learn more.

By contributing 1,000 pairs of period-proof undies to support #HappyPeriod, THINX shined a light on the needs of menstruators who are homeless or living in poverty and the need to expand access to period products for those most in-need. 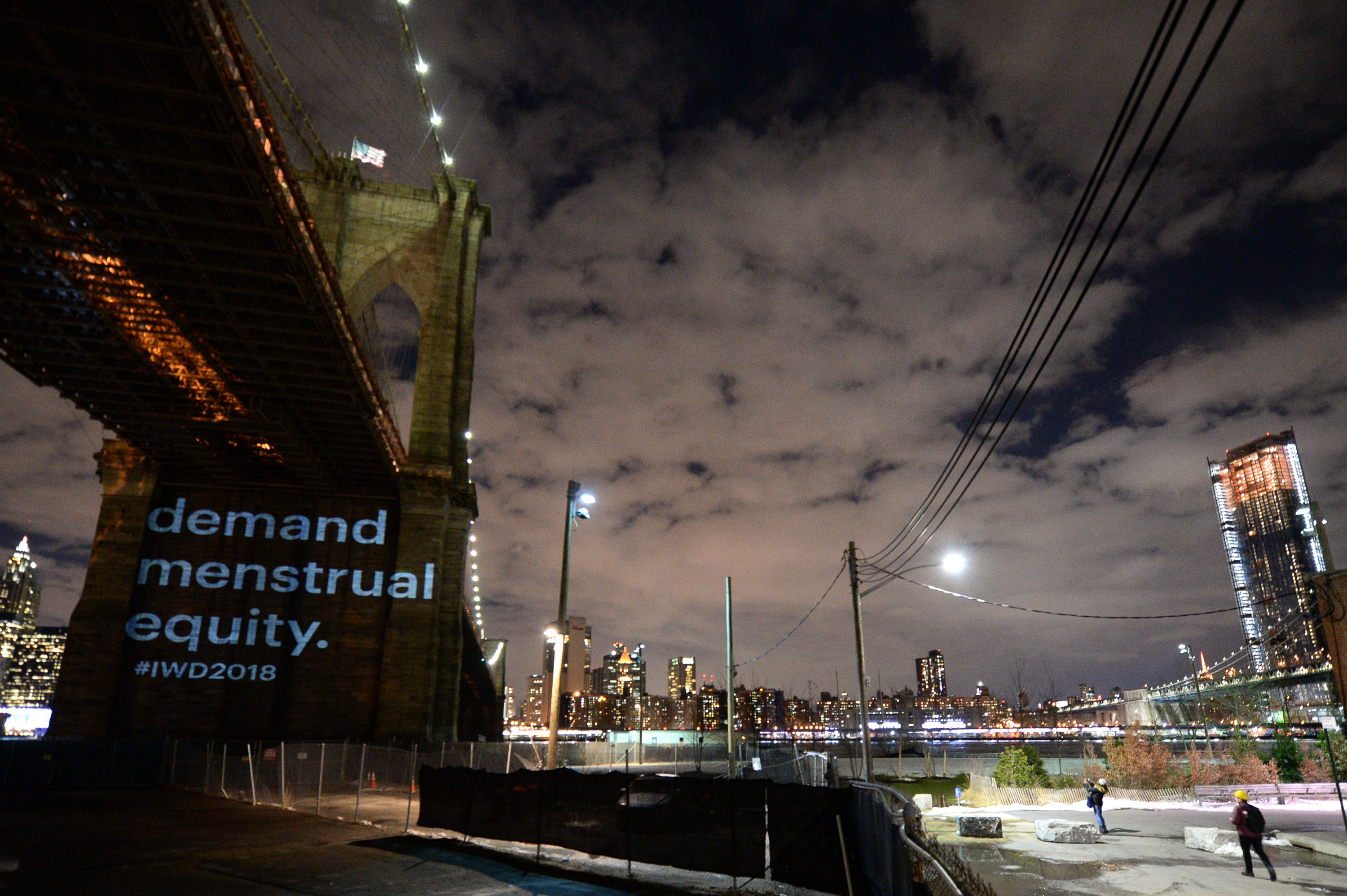 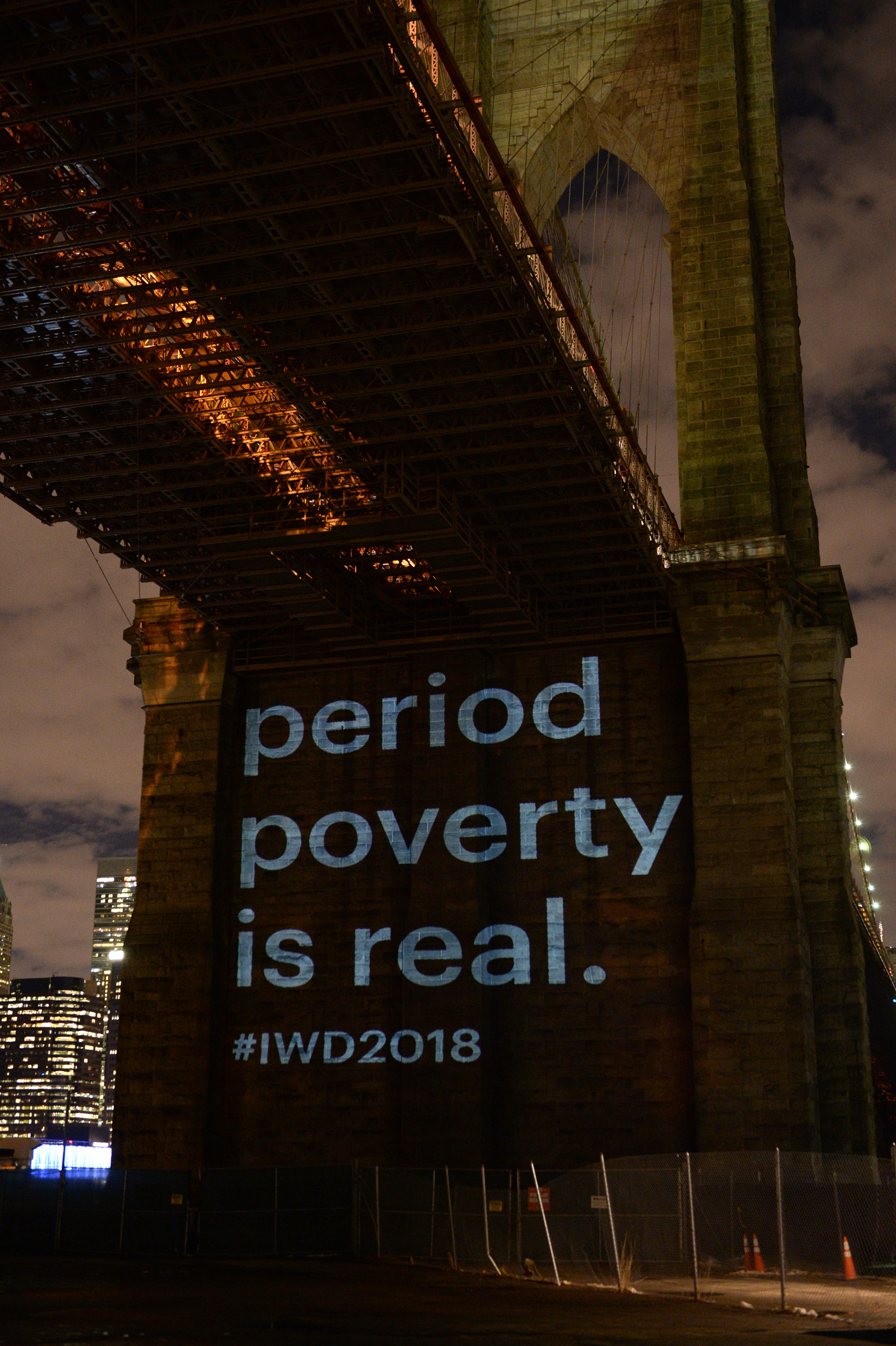 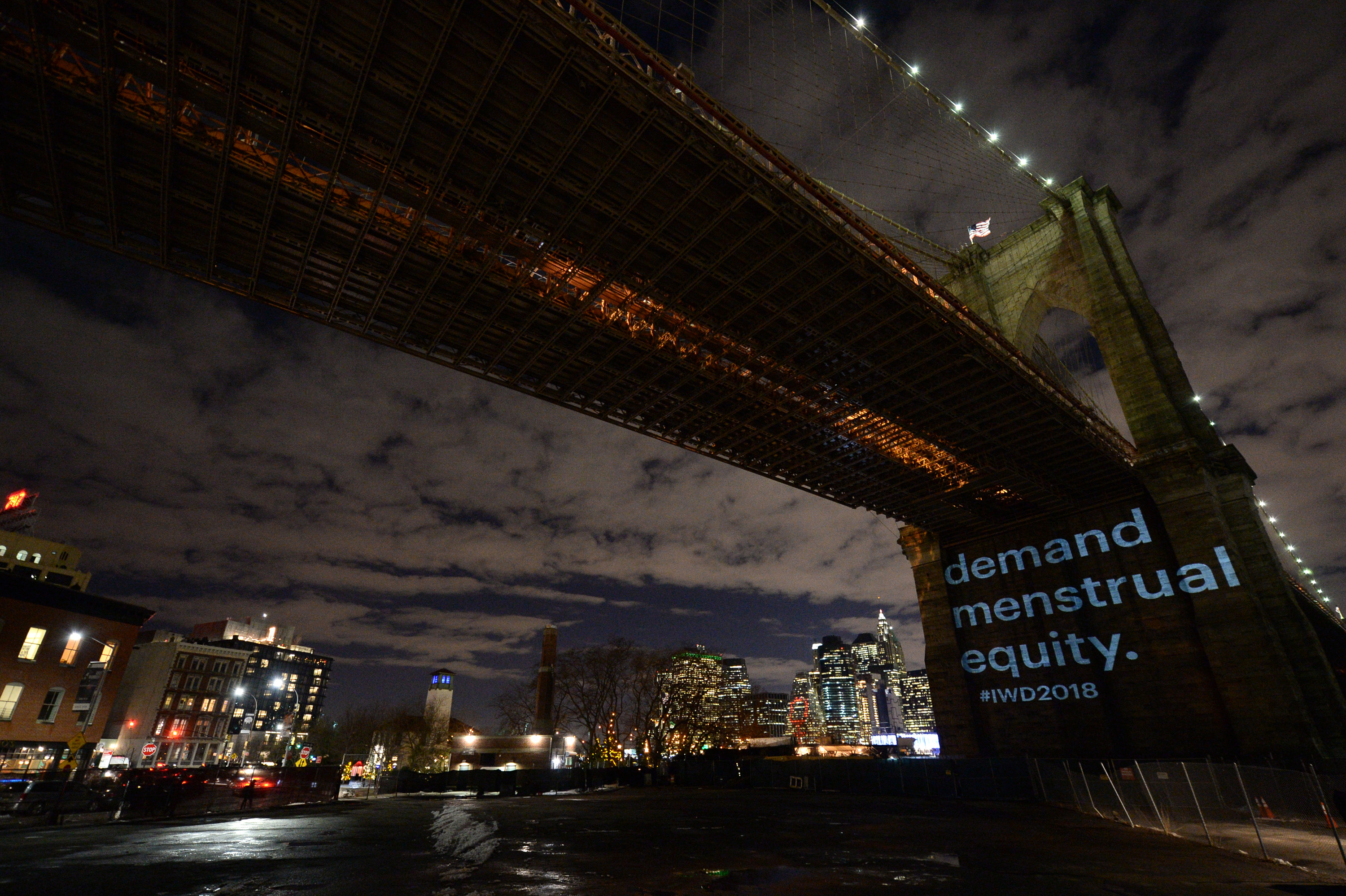 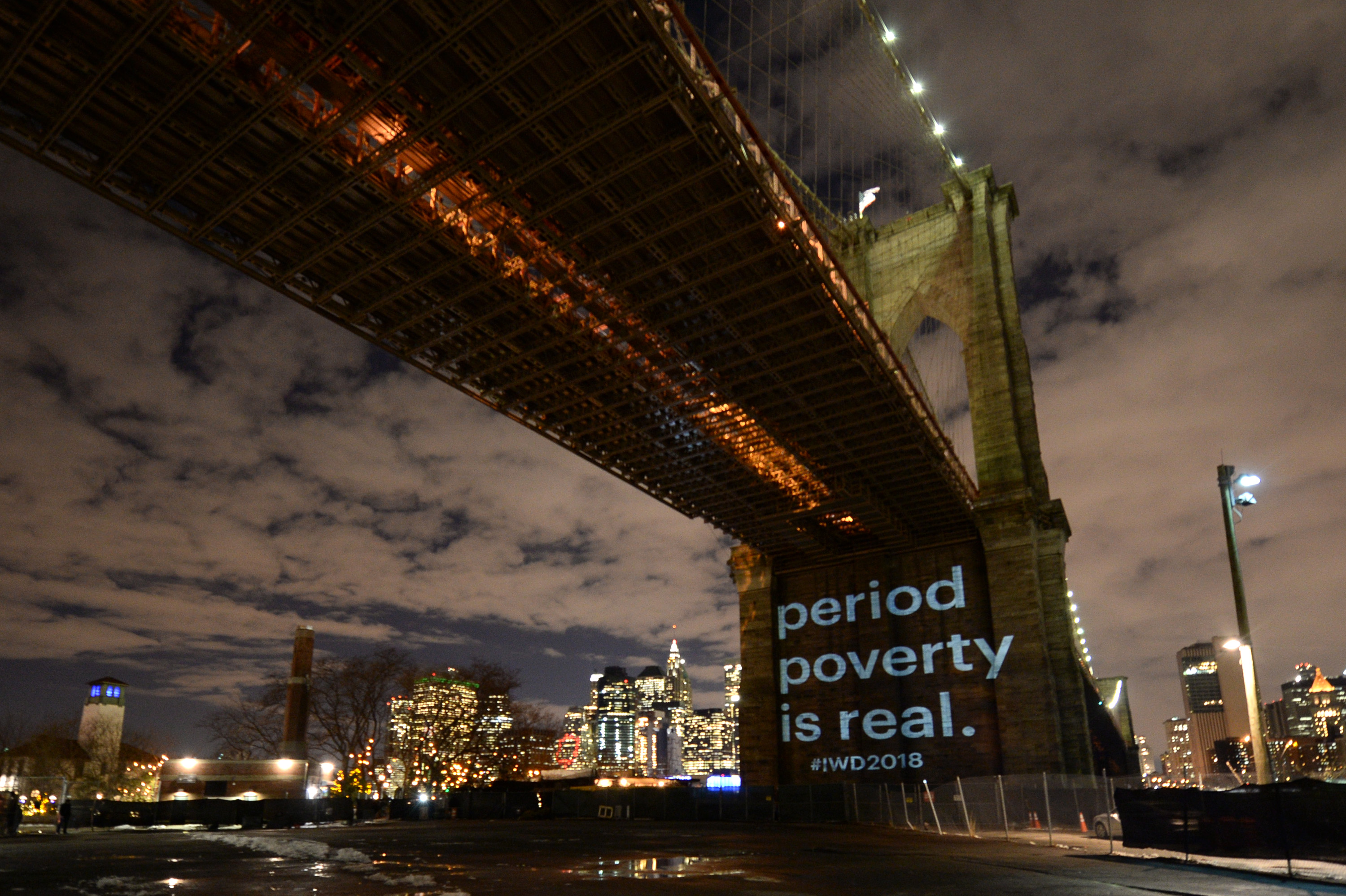 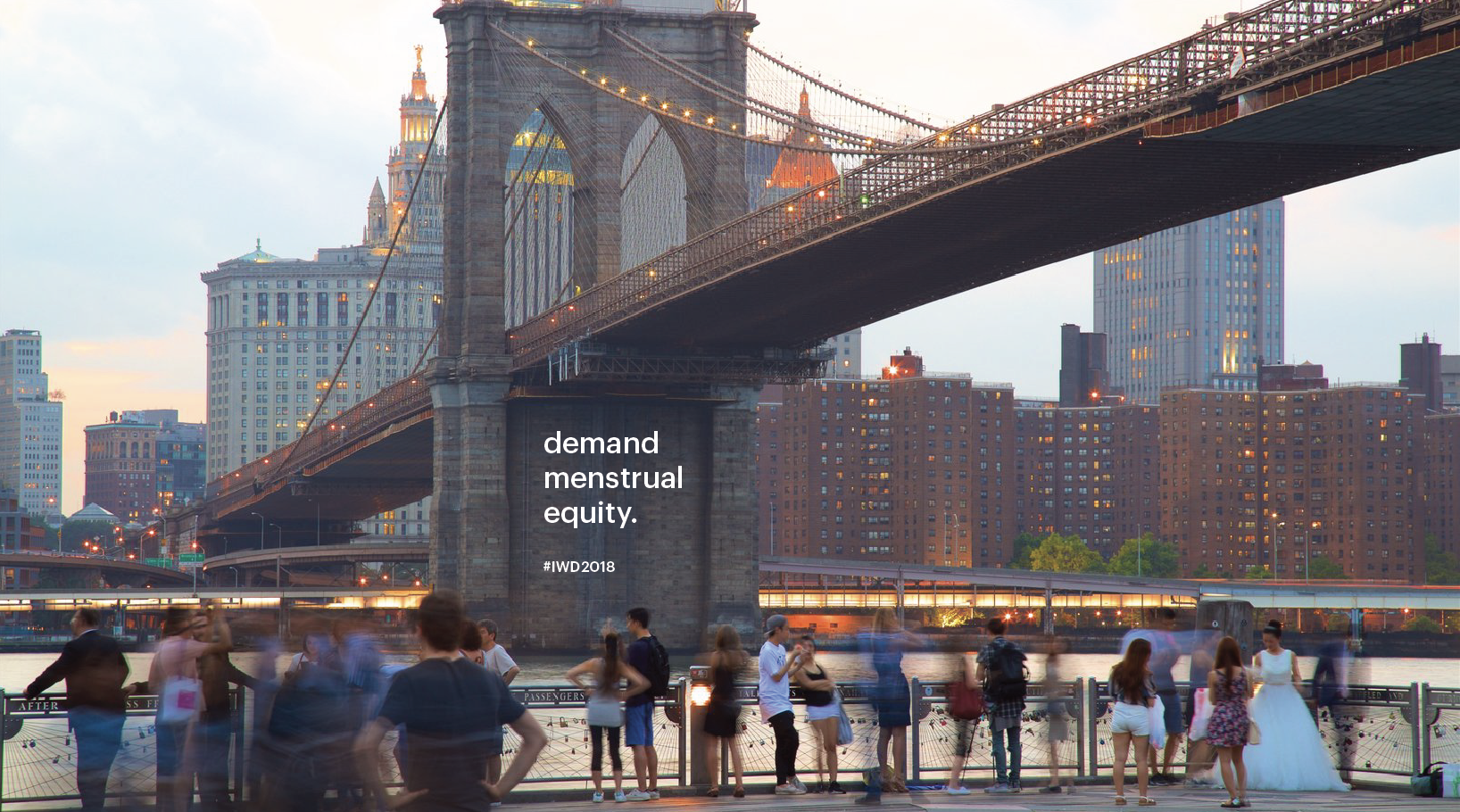