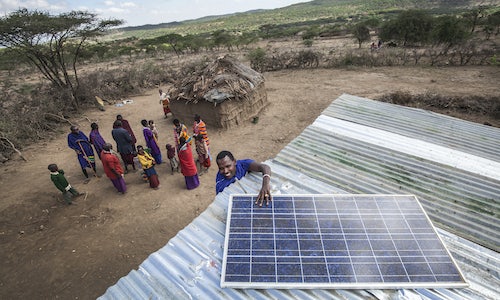 2018 is a crucial year for stepping up solutions to climate change. We're halfway between the adoption of the 2015 Paris Agreement — the first global accord to reduce greenhouse gas emissions — and the year 2020, which scientists say is the deadline for preventing a catastrophic rise in global temperature. However, a recent study found that of all news stories in the U.S. media that mentioned climate change, only 9% even mentioned solutions.

To inspire action in the lead up to the 2018 Global Climate Action Summit, the UN Foundation launched the #EyeOnClimate Instagram campaign to elevate the perspectives of photographers, Instagram influencers, and everyday individuals documenting solutions across the globe.

For too long, we haven't seen enough about climate change in the media, and when we do, research shows that it often makes us feel hopeless. When the #EyeOnClimate campaign first launched in November 2017, it succeeded in elevating new messengers on climate change and harnessing user-generated content as a tool for personal storytelling. However, the majority of the more than 500 UGC images shared by photographers and individuals in 2017 focused on impacts.

The 2018 Global Climate Action Summit marked the opportune time to revamp the campaign with a new strategy: fill the gap in solution stories. In the lead up to the summit in September, the UN Foundation tapped a global network of photographers and mobilized a range of influencers, including Leonardo DiCaprio, actor Steven R. McQueen, National Geographic photographers Ami Vitale and Cristina Mittermeier, filmmaker Jack Harries, vlogger Louis Cole, and YouTubers Marissa and Shanna.

Throughout the months of July, August, and part of September, the UN Foundation Instagram handle shared content submitted by photographers from around the world - from sustainable cocoa farming in Cameroon to solar thermal plants in California. The photos and videos shared captured a diversity of solution stories and uncovered vital connections to other Sustainable Development Goals. For example, photographer Ami Vitale's photo documented how empowering women can help communities build crucial resilience writing, "These solutions give much needed access to healthcare and education to Bangladesh's Char dwellers, whose lands are literally dissolving before their eyes because of rising seas."

To increase participation, the UN Foundation regularly spotlighted organic posts in its Instagram story every week. Additionally, all UGC shared with the #EyeOnClimate hashtag displayed on a dedicated page on the Global Climate Action Summit website, making everyday individuals feel a part of the global climate conversation.

Finally, the campaign culminated at the Global Climate Action Summit in San Francisco with a wrap-up video of top posts and a live conversation with #EyeOnClimate participant and 2018 National Geographic Adventurer of the Year, photographer Cristina Mittermeier. In her interview, Cristina highlighted the important role of photographers in making climate change visible to audiences everywhere.

Although the #EyeOnClimate campaign had a challenging focus on solutions, it broke UN Foundation social media records and successfully garnered more than 700 UGC posts on Instagram. A video story about sustainable cocoa farming shared by participating photographer John Novis organically received more than one-hundred thousand views and was shared by Vampire Diaries actor Steven R. McQueen - the most Instagram video views UN Foundation content has ever had. In addition, a photo from Ami Vitale capturing the intersection of conservation, climate change and women's empowerment received the most likes (5K) of any photo on UN Foundation's Instagram handle. And a photo documenting mangrove restoration re-shared by Leonardo Dicaprio received the most likes of any UN Foundation Instagram content ever - more than 400K.

Across all platforms, the #EyeOnClimate hashtag was used in more than 2,500 posts, reaching 33.8 million individuals online, surpassing metrics from 2017. More importantly, the campaign became a rare platform for hopeful engagement with climate change and united new, compelling messengers together under the same hashtag. For example, groups such as the indigenous organization, Guardians of the Forest, and the artist group, Sketching Climate Stories, organically picked up the #EyeOnClimate hashtag to share their stories from the ground.

After years of portrayals as an invisible, incomprehensible, and insurmountable issue, #EyeOnClimate harnessed UGC to create a refreshing, positive lens on climate change. Collectively, the images and videos shared from individuals around the world show that global action is not only possible - it's already underway.