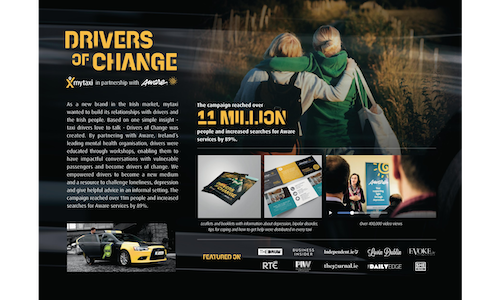 As a new brand in the Irish market, mytaxi wanted to build its relationship with driver and connect with Irish people.

International research shows that the best way to challenge mental health stereotypes is through first-hand contact with people with experience of mental health problems [Mental Health Foundation, UK]. Based on the simple insight, that taxi drivers love to talk, we came up with the Drivers of Change idea.

The idea was to utilise the mytaxi drivers as a resource to challenge loneliness and depression and give helpful advice in an informal setting. By partnering with Aware, Ireland's main mental health charity, we could facilitate mental health workshops which would educate the taxi drivers, enabling them to have these conversations with vulnerable passengers and become drivers of change.

By making a video of the workshops in action and some of the conversations taking places, we hoped to make a positive impact on the Irish society, starting a conversation online as well as in the taxi cabs!

We reached out to the mytaxi driver network with the option to opt-in to attend mental health workshops with Aware.

Those who opted in attended workshops with Aware's Director of Services and became mental health advocates, learning about depression and its symptoms, how to talk to vulnerable passengers and becoming educated about the scope of services Aware provides. The first workshops took place in November 2017 and we followed the drivers' stories over the next few months.

To launch the campaign, we produced a hero video highlighting key mental health statistics, documenting the Aware workshops and the mytaxi drivers' experiences with the initiative. This was shared on Facebook on January 31st with a targeted social ads strategy and supported by an international PR campaign and support videos throughout February. The ads strategy focused on Facebook Ads in feed, instant articles, in-stream videos and suggested videos, optimised for video views.

The campaign reached over 11m people online and increased searches for Aware services by 89%. Over 3,000,000 passengers were impacted inside the taxis.

The video achieved phenomenal results in its first week. It reached over 530,169 people with gathered and 3,552 engagements.

The outreach campaign was hugely successful and resulted in press coverage in 8 countries, with articles in 24 Irish publications and over 200 international publications.

While coverage was wide-reaching with an estimated media reach of 11 million, it was also impactful and covered in Washington Psychiatric and Health Technology Net.

The campaign was such a success that mytaxi's 2018 aim is to expand the workshops, engaging more drivers and offering more possibilities to impact positively on mental health in Ireland.

Video for Drivers of Change 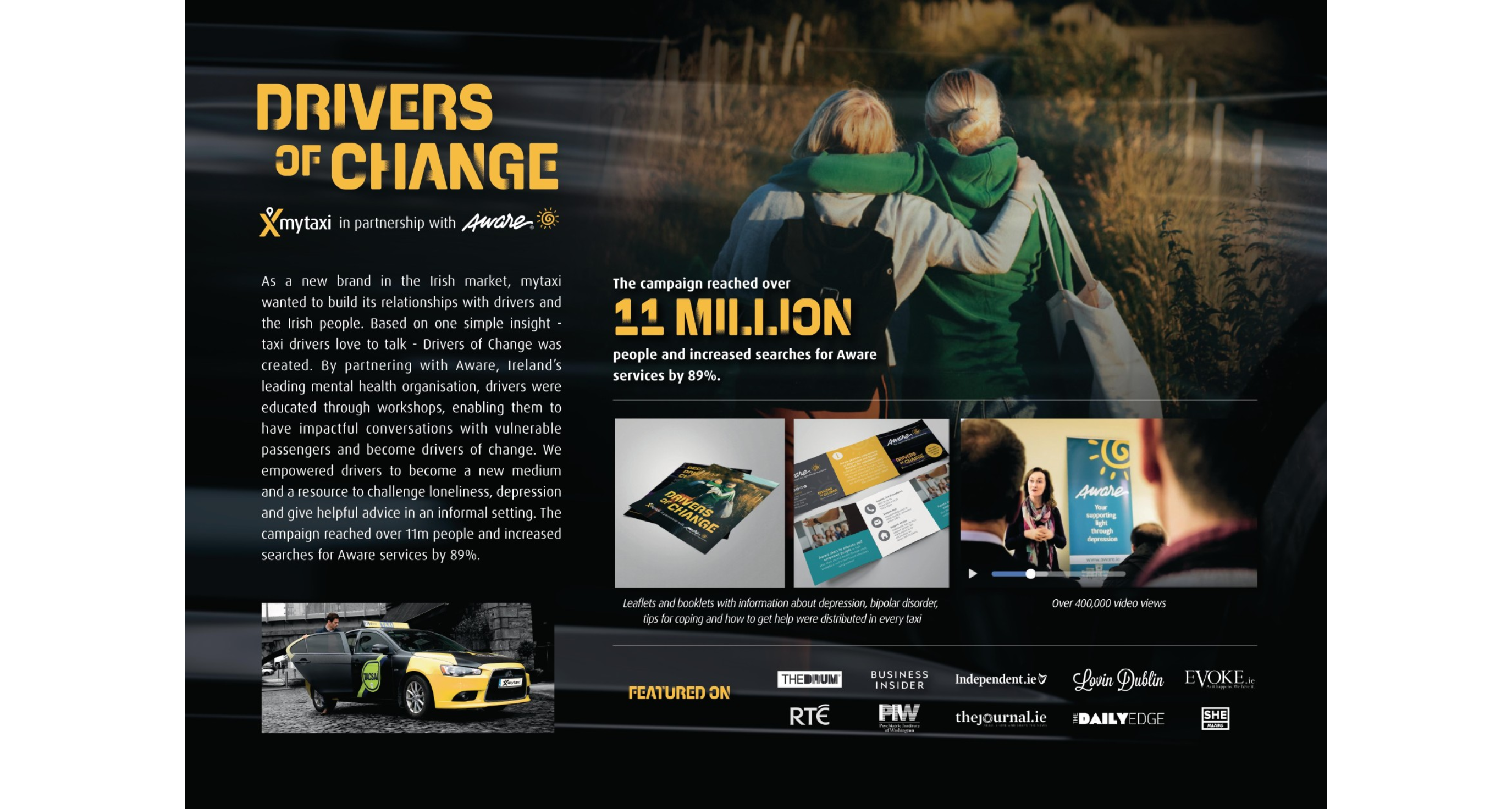