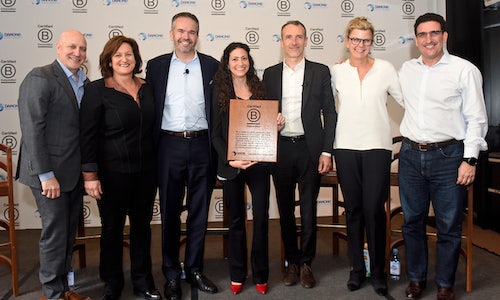 The future requires a new kind of leadership from the food business. Consumers are craving change, and they expect large organizations to use their scale to change the world for the better.

Danone North America was formed as a Public Benefit Corporation in April 2017 when Danone acquired WhiteWave Foods and combined it with its existing U.S. yogurt business to create a company with a profoundly deep commitment to purpose, growth and good food. As the maker of beloved food and beverage brands including Dannon®, Danimals®, Silk®, So Delicious®, Horizon Organic®, Vega® and Wallaby®, among others, Danone North America is a top 15 food and beverage company.

For Danone North America, earning B Corp certification was one step in a much longer purpose journey; it demonstrated that Danone North America is a new kind of company: one of significant size and thus responsibility, driven to affect change and inspire others to join the movement toward better business.

Danone North America's achievement presented an opportunity to tell a broad audience about the impact of B Corp Certification. Achieving B Corp Certification celebrated and codified sustainability initiatives – inspiring the company's employees and leaders to embrace the concept of business as a force for good and embedding it into the day-to-day. Danone North America engaged more than 150 employees in achieving certification, collecting thousands of data points and completing three site audits to achieve a finalized score of 85, five points over the rigorous minimum of 80 required. To date, nearly 60,000 companies have engaged with the B Impact Assessment online and only about four percent (2,400 globally) of those companies went on to become Certified.

As the largest company to ever become Certified, Danone North America was well positioned to take a leadership stance on the importance of sustainable development among corporations of all sizes.

The team employed a strategic Paid-Earned-Shared-Owned (PESO) model to communicate Danone North America's news and the larger relevance of its certification. The strategy relied heavily on leveraging the timing of the company's one-year anniversary and upcoming Earth Day holiday, as well as engaging third-party advocates to help tell the story.

Danone North America's ambition in pursuing B Corp Certification was to help clear the path for other large corporations – including fellow food and beverage companies – to follow suit. So, an important metric is that since Danone North America's certification, 15 large companies were inspired to reach out to B Lab to learn more about the process.

To raise awareness of what being a B Corp means, the team conducted briefings with key thought leaders from Yale, MIT and Aspen Institute, among others. Embargoed and day of media outreach led to 96 media placements, earning more than 195 million potential media impressions, which the team amplified using Outbrain. Key placements included Bloomberg, Fast Company, CNN, CNBC, Food Business News and others. One anecdotal highlight was when Paul Polman, Unilever CEO shared the Bloomberg story with his Twitter followers.

To give stakeholders the opportunity to engage in person, Danone North America hosted a celebratory event with a panel led by Tom Colicchio in NYC that attracted 60+ guests. The panel educated and engaged guests, and the reception provided an opportunity for mingling and networking while enjoying some of the company's iconic products. The discussion was streamed to employees, creating excitement among the Danone North America team. 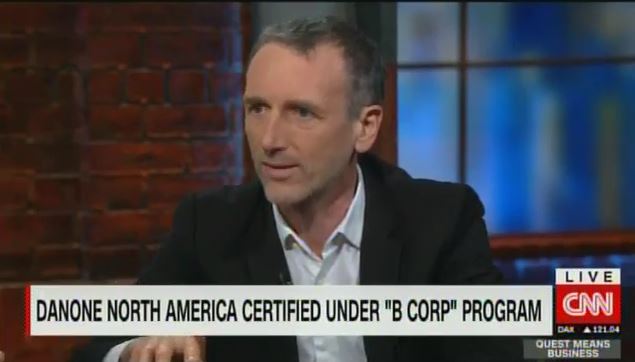 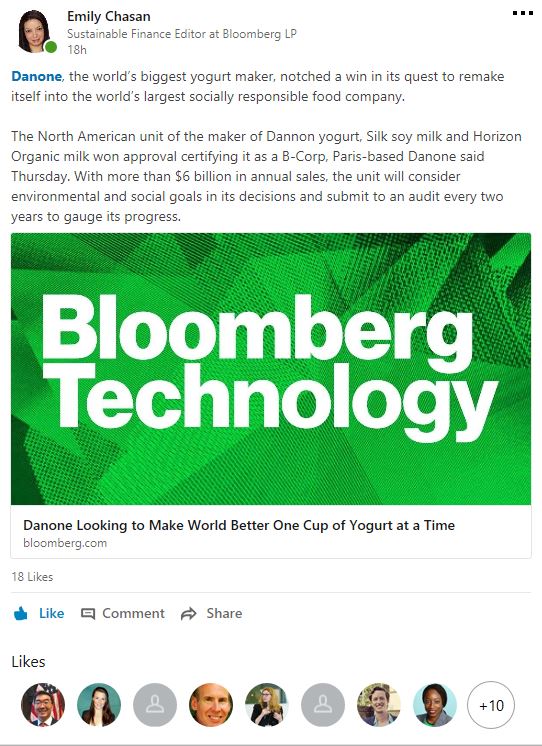 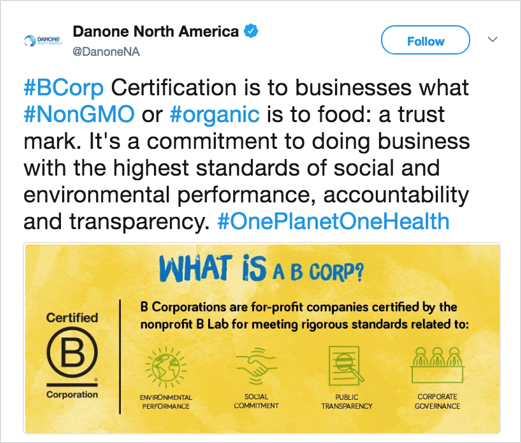 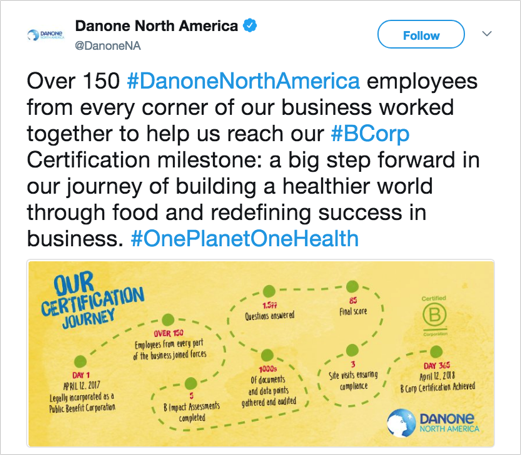 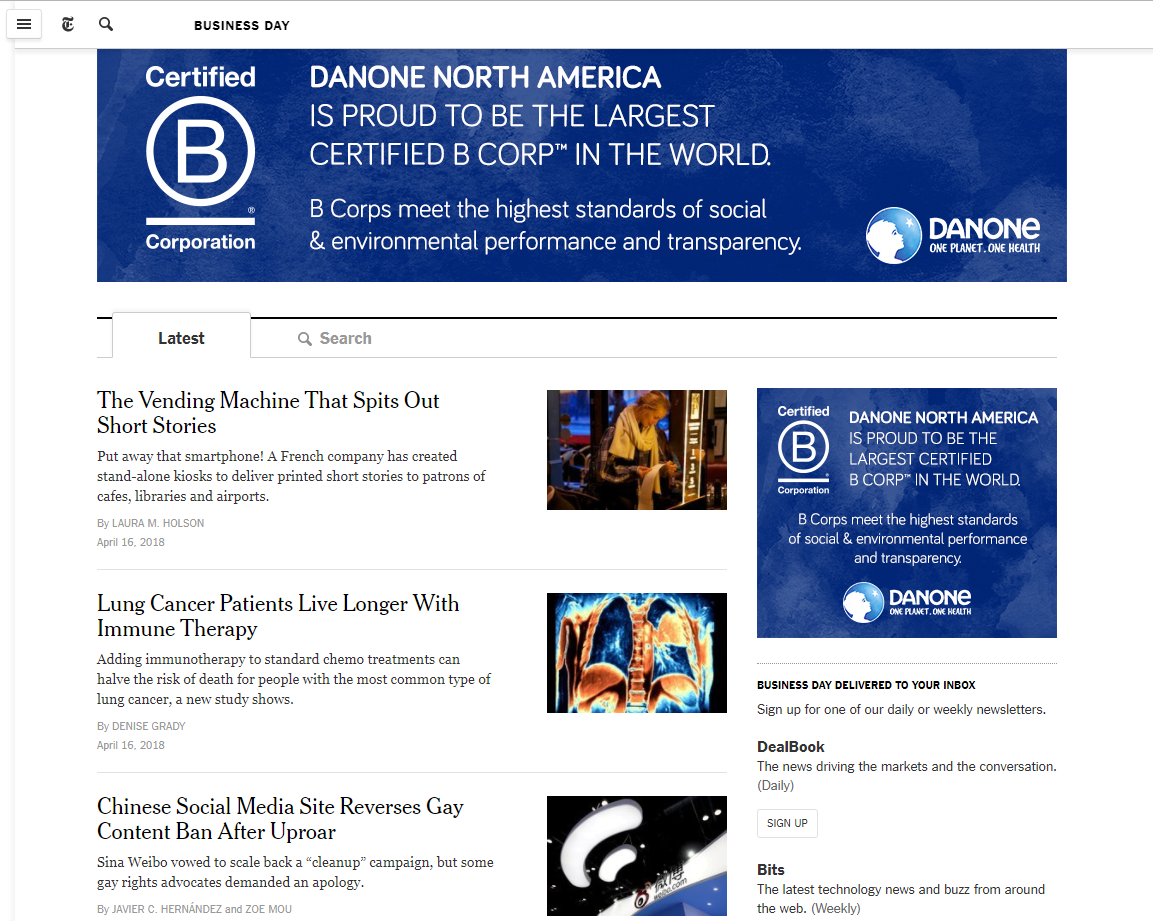 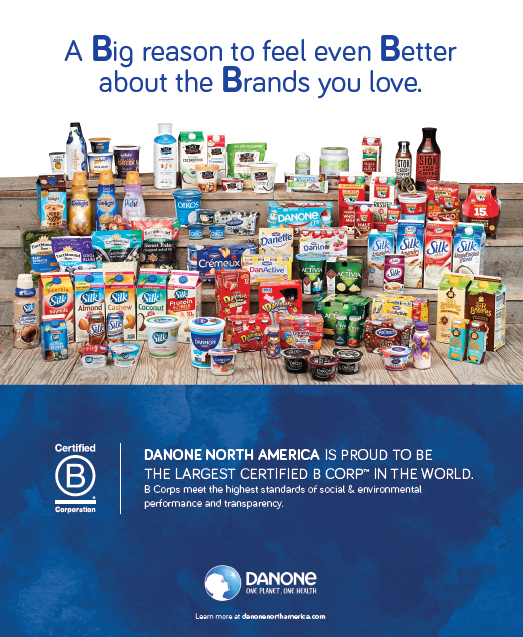 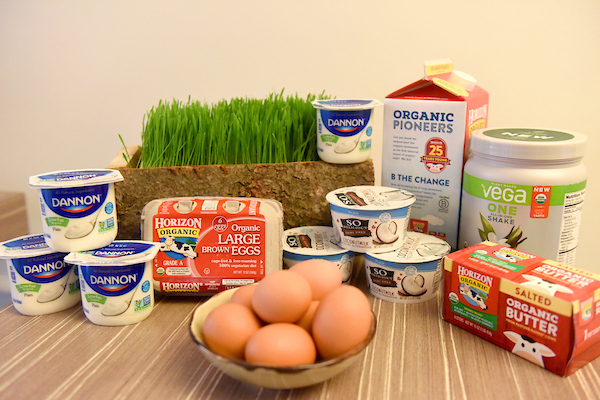 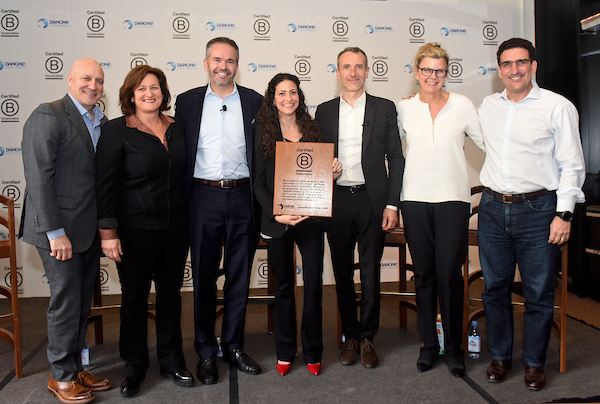 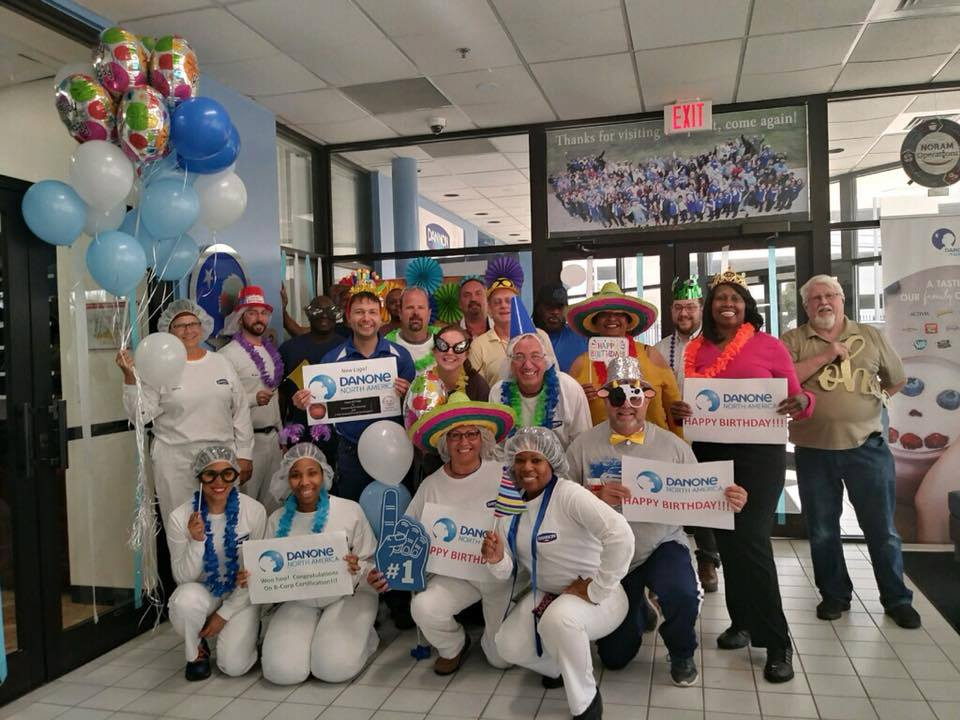