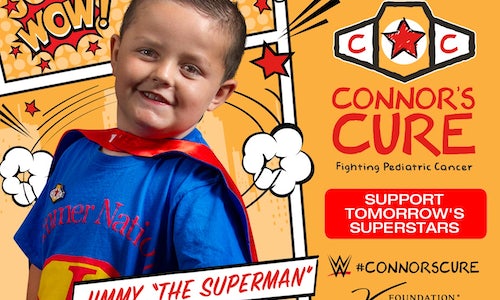 WWE Chief Brand Officer Stephanie McMahon and her husband, 13-time Champion and WWE Executive Vice President of Talent, Live Events and Creative Paul "Triple H" Levesque, founded Connor's Cure in 2014 to honor WWE fan Connor Michalek, who passed away at age 8 after battling a rare cancer affecting the brain and spinal cord. Stephanie and Paul's personal connection with Connor sparked them to create Connor's Cure, a pediatric cancer fund in partnership with the Children's Hospital of Pittsburgh to help raise awareness and funds so that one day no family or child will have to experience cancer.

Because children battling cancer are the ultimate Superstars, WWE wanted to help patients create their hero persona in line with WWE's goals of raising awareness and funds to support research and find a cure. In July 2017, two months ahead of National Pediatric Cancer Awareness Month, WWE and Connor's Cure collaborated with Children's Hospital of Pittsburgh to identify patients interested in creating their own WWE personas tied to their cancer journeys. WWE then worked with the patients to develop and personalize each of their "in-ring" personas, including ring gear and entrance music. Stephanie McMahon and WWE Superstars Alexa Bliss, The Miz, Maryse and Finn Balor hosted the "Support Tomorrow's Superstars" reveal event for the children to showcase their Superstar personas in front of family and friends. This event created content for WWE's live programming and global digital and social channels during September's National Pediatric Cancer Awareness Month.

WWE incorporated Connor's Cure branding across many lines of business in September to raise awareness of the initiative's goal in fighting pediatric cancer. Efforts included putting the Connor's Cure Logo on the WWE jumbotron, entrance ramp, ring posts and digital ring skirt at each weekly event and Superstars wearing Connor's Cure merchandise, stickers or pins. Connor's Cure was also highlighted during international programming like shows like Wal3ooha in the Middle East and Aftermath in Canada.

That content would become the epicenter of a full Connor's Cure "takeover" across WWE's numerous global channels and platforms during National Pediatric Cancer Awareness Month. WWE integrated Connor's Cure messaging and identity into the brand's array of networks and broadcast media, digital/social, community events and merchandise.

To broadcast the initiative to a larger audience, WWE partnered with ESPN to air PSA footage from the "Support Tomorrow's Superstars" reveal event. ESPN heavily supported Connor's Cure across broadcast, digital and social assets throughout the month of September, including featuring the Connor's Cure merchandise on the Coast-to-Coast hour of SportsCenter. In addition, WWE engaged several celebrity influencers to wear Connor's Cure merchandise in photos shared on social media including NBA stars Stephen Curry and Kevin Durant along with actor Seth Green, who helped spread the Connor's Cure message throughout the month of September.

To date, Connor's Cure has raised more than $2.5 million and assisted more than 400 families around the world.

Through broadcast support in September, WWE reached more than 14.7M unique viewers in the U.S. Social media promotion generated 243M impressions and 5M engagements. Connor's Cure videos were viewed more than 16.5M times and social media impressions were up by 353% compared to 2016.

As a result of the "Support Tomorrow's Superstars" campaign, WWE increased mission awareness by 91%.

WWE fans were so inspired by Connor's Cure that many held their own fundraisers –most recently at WrestleMania 34 in April 2018 raising $6,000 – illustrating how WWE inspires fans in the same way Connor inspired Stephanie and Paul four years ago.

Most importantly, Connor's Cure has a real impact on the lives of those who need it most. Patients featured in the "Support Tomorrow's Superstars" event connect regularly with Stephanie, Paul and others in the WWE community – often texting them directly. 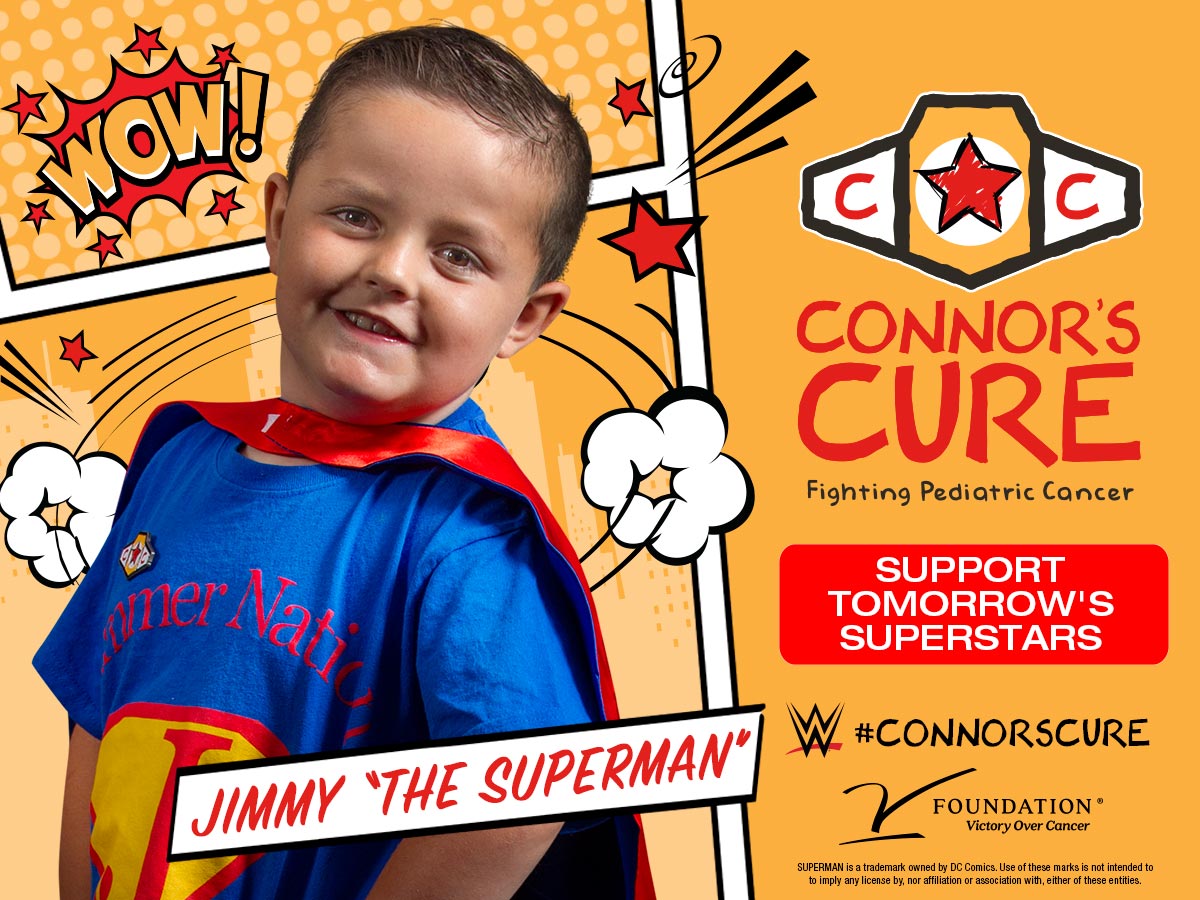 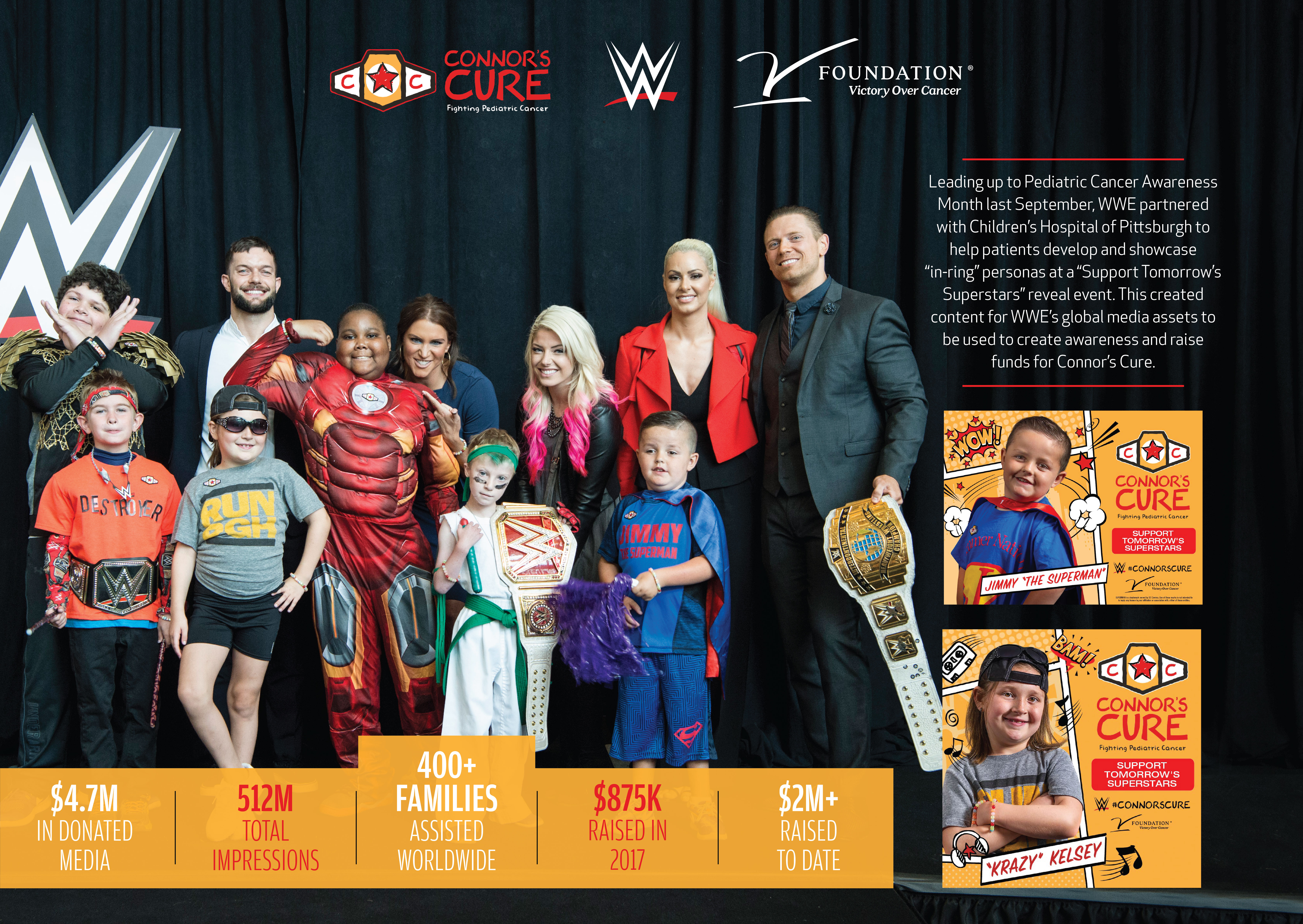