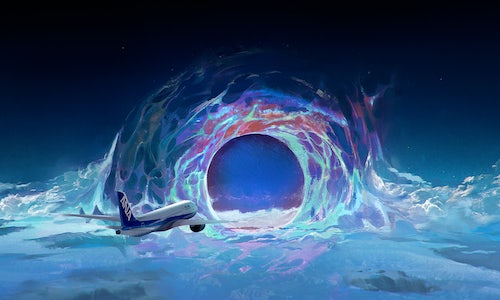 Seat 14C is, at its core, an earnest exploration of our possible future. The objective is simple; to crowdsource an optimistic and exciting future for mankind. How will technology and culture interact in the year 2037? How has emerging (or not-yet-invented) technology altered society for the better?

We asked 31 of the world's top science-fiction storytellers to contribute their visions of this future, each told through the lens of a passenger on a fictional flight that mysteriously lands in San Francisco in the year 2037. Then, we asked the crowd to submit their own visions; the story of the passenger in Seat 14C is reserved for them.

Science-fiction has always been a source of inspiration for innovators, inventors and technologists. So, who better to envision the future of mankind than science-fiction storytellers? We commissioned 31 of the world's top sci-fi authors to write stories from the future, told through the lens of the passengers on a fictional, time traveling flight, ANA Flight 008:

"At 4:58am on June 28th, 2017, the passengers on board ANA Flight 008, en route from Tokyo to San Francisco, are cruising at an altitude of 37,000 feet, approximately 1,500 nautical miles off the West Coast of the United States. A small bump, otherwise noted as a barely perceptible bout of turbulence, passes Flight 008 through a temporary wrinkle in the local region of space-time. What these passengers will soon find out as they descend into SFO is that the wrinkle has transported them 20 years in the future, and the year is now 2037."

Armed with 30 original short stories (each paired with an original piece of artwork) from award-winning authors such as Bruce Sterling, Daniel H Wilson, Charlie Jane Anders and more, including an original poem from Margaret Atwood, we built an interactive website designed around the seat map of ANA Flight 008. Clicking on a seat presents that passenger's story as they leave the airplane and discover a world changed by technology and innovation. An animated intro video helps tell the story of Flight 008's mysterious time travel as it lands at SFO in 2037.

Seat 14C, however, is reserved for the crowd. We asked the storytellers of the world to submit their own vision of the future from the perspective of the passenger in Seat 14C for a chance to join the seat map and win a $10,000 prize package, including a trip for two to Tokyo. By inviting anyone to write, we're capturing more ideas, and thus more inspiration for next steps in making change. It's our belief that we should tap all minds, for there is potential for change in each.

Imagining the future we want to create can be overwhelming, as it begs many questions about how we will arrive there. To balance this, we used time travel to transport the passengers unwittingly into the future. This quick jump sets the imagination forward to where we want to be, effectively skipping the how do we get there? By considering the ideal future first, we can set lofty goals and birth audacious ideas. Then, we go back and ask the innovators of the world, "How can we accomplish this?" After careful deliberation, we decided 2037 is distant enough to allow for amazing tech advancements, but near enough that people can conceivably imagine it in their lifetimes.

Technology is becoming exponential. What once took 10 years to develop may now take 2. In 20 years, these imagined future states could be our reality, and those who imagine them may one day live in them.

The launch of Seat 14C was met with excitement from top media outlets such as WIRED, IFL Science, Futurism, Ars Technica, Scientific American, Geekwire, Discover, and more. Writers and creatives around the world expressed their excitement for Seat 14C on social media, and many storytelling communities promoted the opportunity to their writers.

We asked the crowd to imagine their bold vision of the future and they did not disappoint. Over 1,300 stories were submitted from 74 different countries. At 4,000 words each, that's 5 million words.

Seat 14C was a hit on social media as well, experiencing over 127 million impressions across channels, with mentions from influencers, top media brands and passionate fans alike. See attachment for a sampling of social media mentions.

1,346 visions of our near future were imagined for Seat 14C. Seen through the lens of a global population, these stories represent a community of optimists and change-makers. We are proud to be in the company of such imaginative minds as we work together to shape our future. 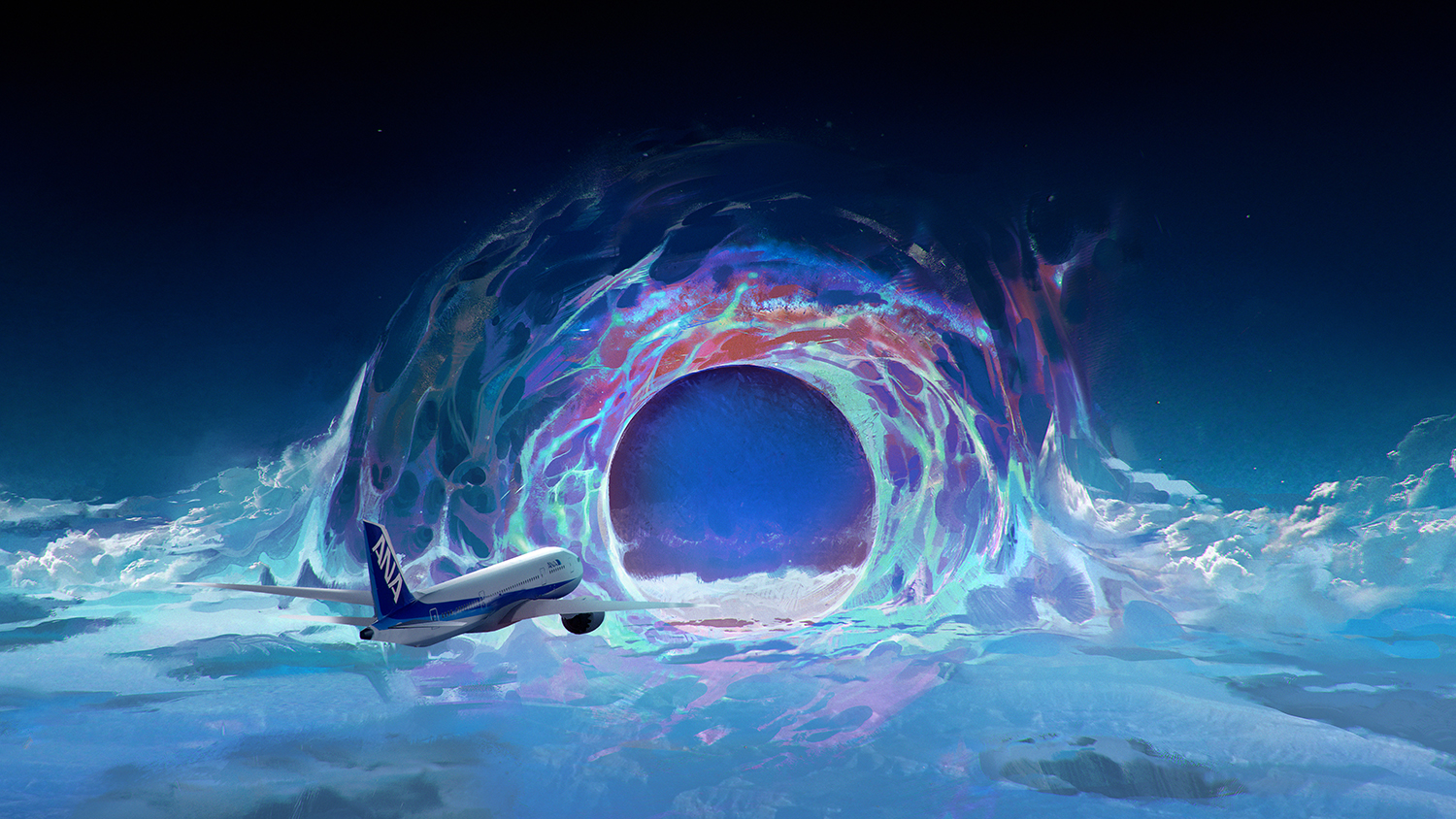 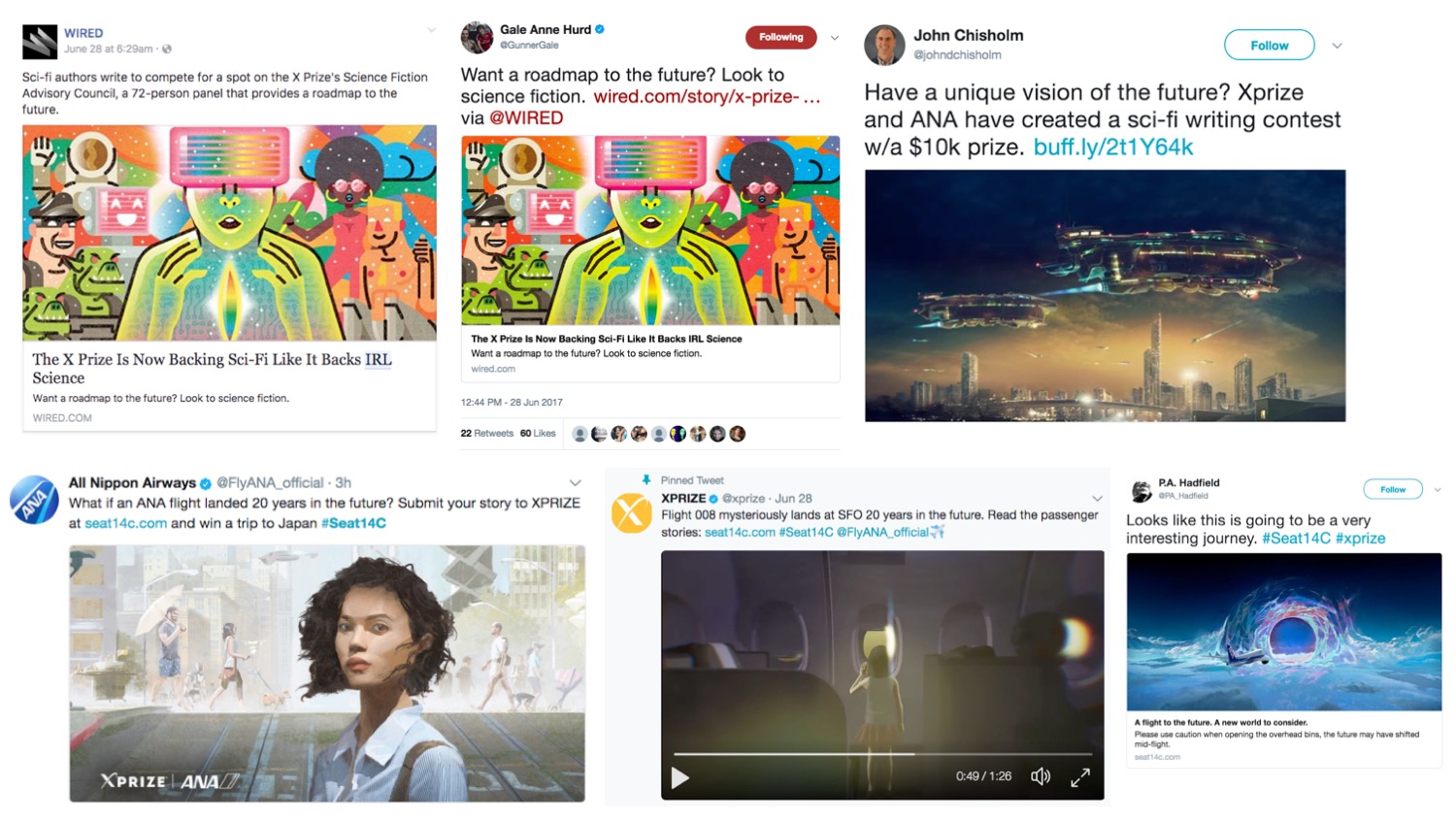 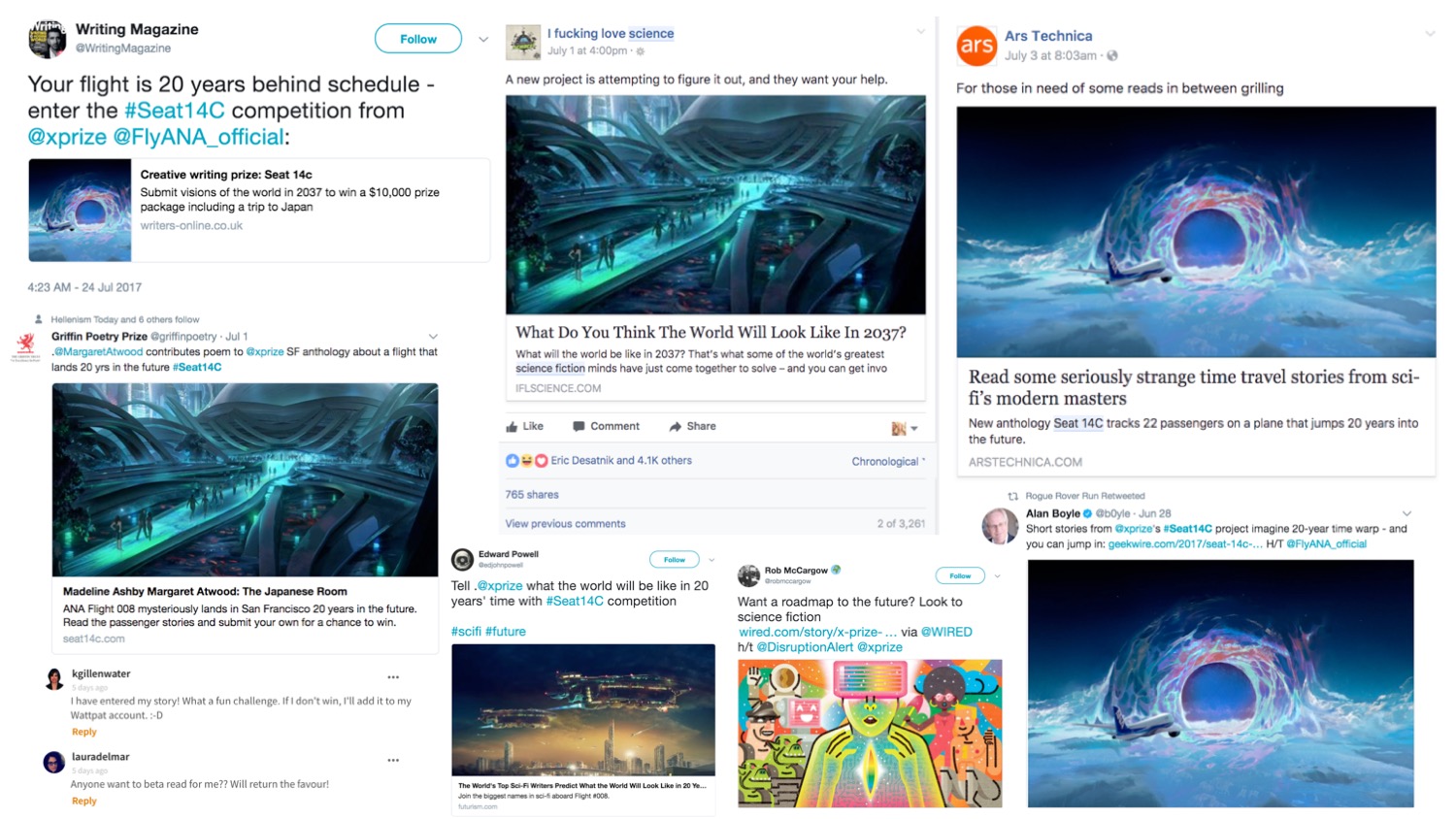 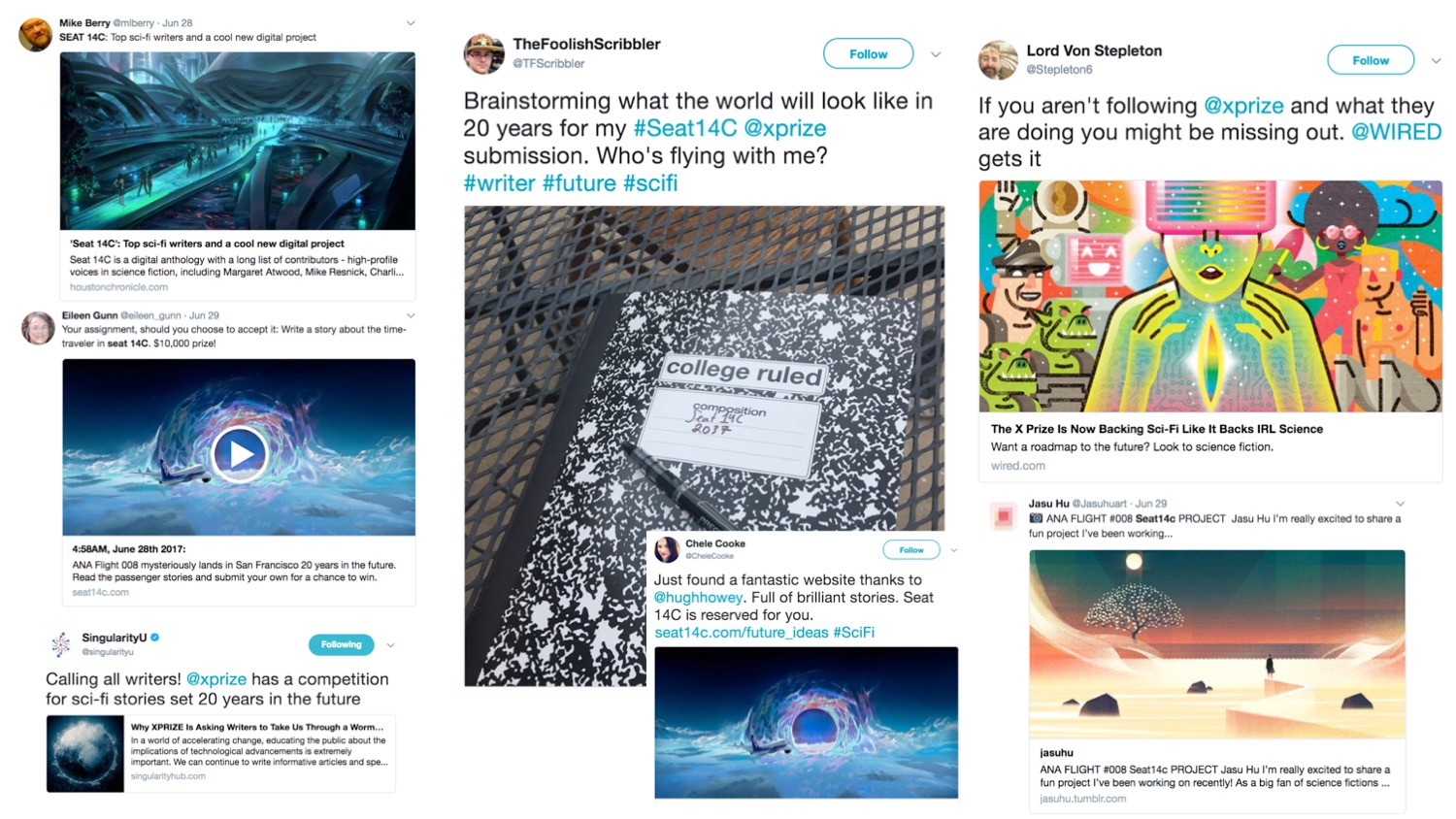 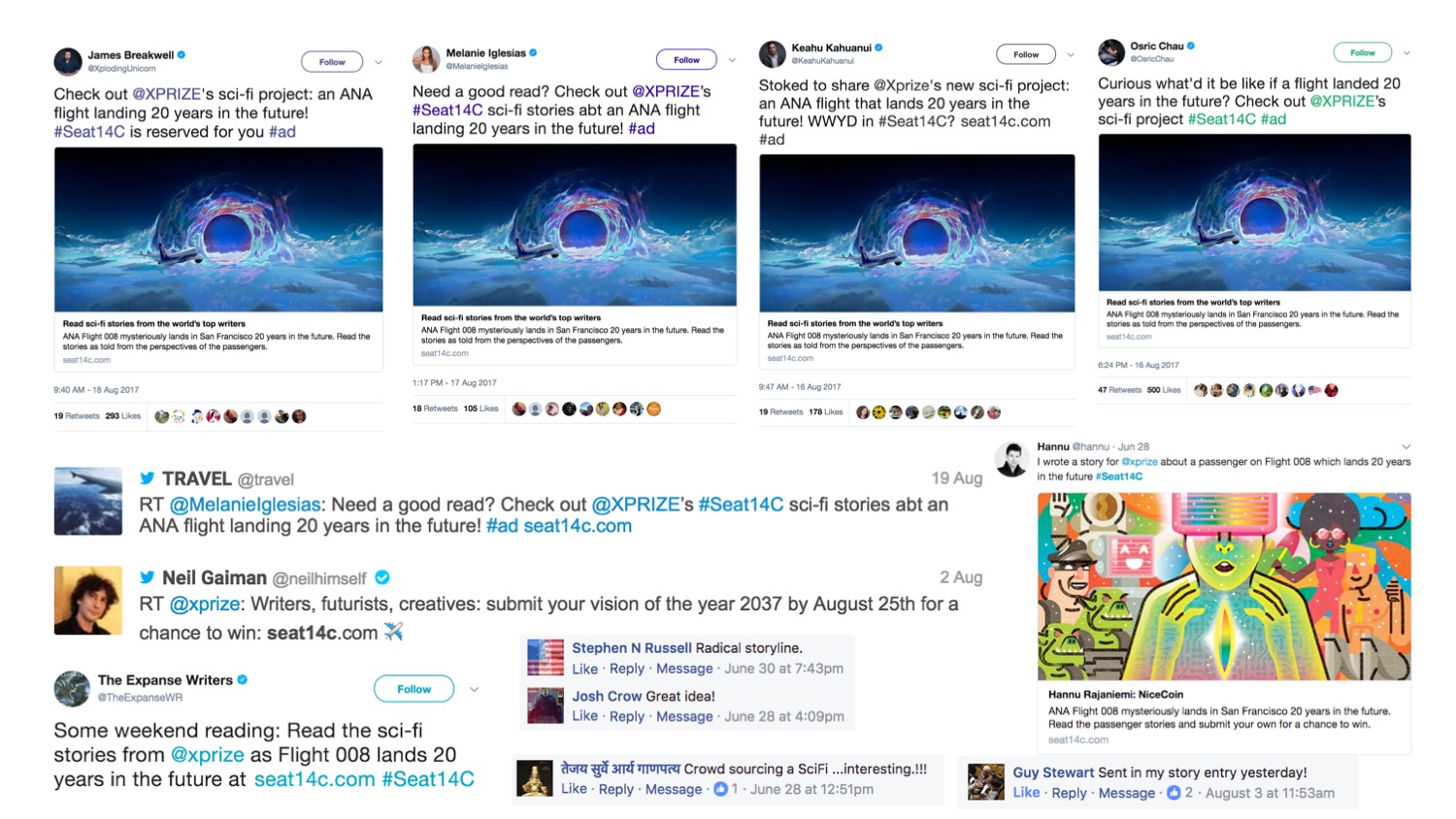 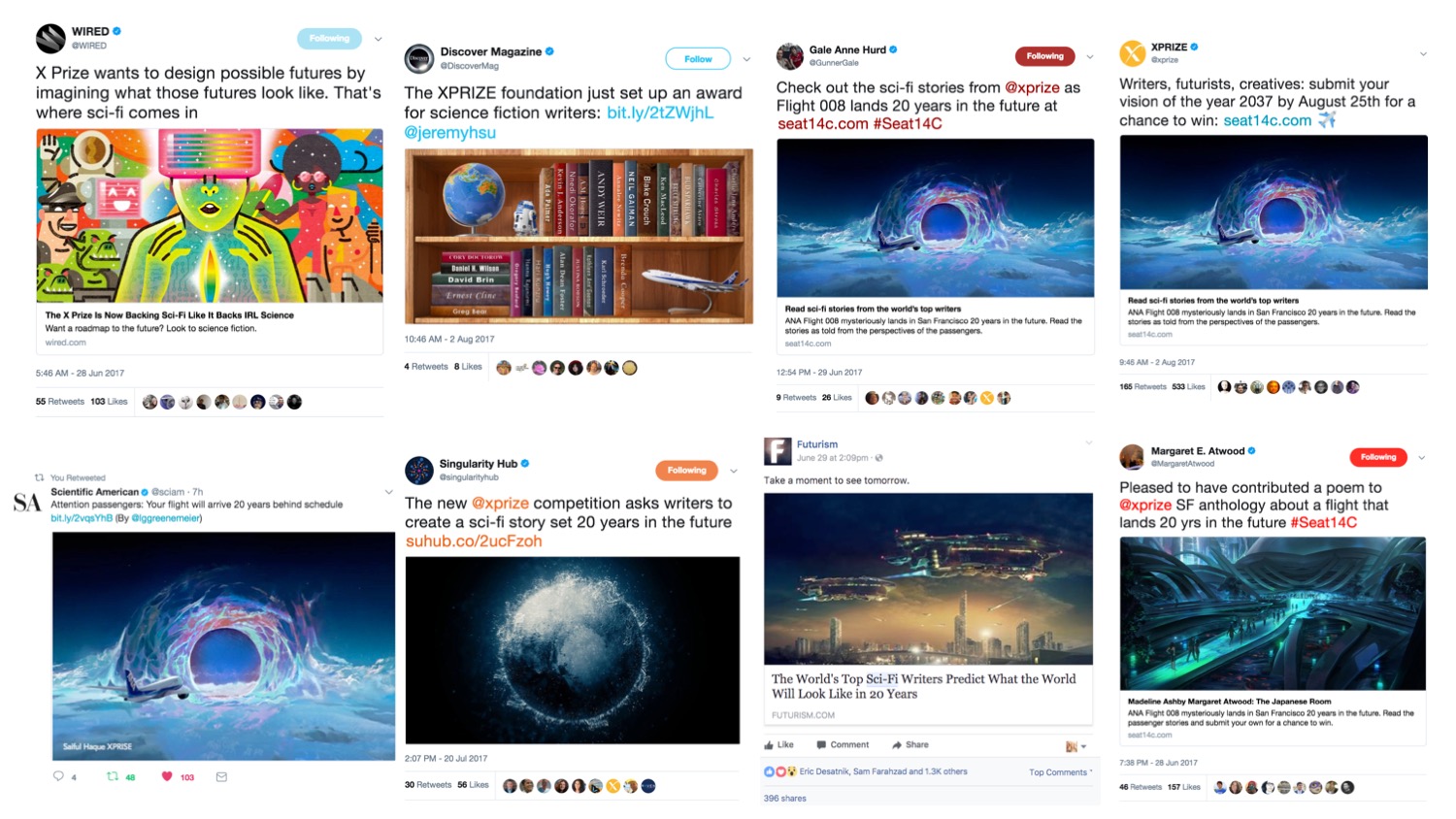