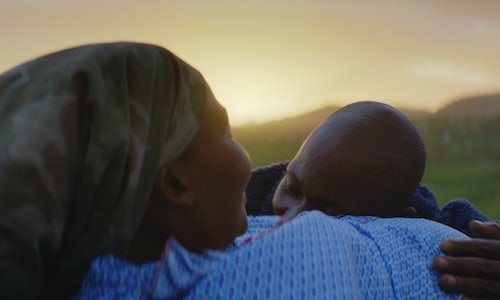 In 2011, Ken Frazier President and CEO of Merck (known as MSD for Mothers outside of the U.S. and Canada) launched Merck for Mothers (MFM), a 10-year $500M initiative focused on improving the health and well-being of mothers during pregnancy and childbirth.

After five years, the initiative wanted to ensure they could inspire new audiences, remaining relevant amongst policymakers, NGO's and consumers. We needed to position MFM as a leader in maternal health, illustrating the role of private sector support for this public health issue and create greater awareness for the initiative, inspiring new partners to join. An injection of emotionally compelling storytelling was needed to drive new excitement and enthusiasm for the next five years of the program.

To do this, we created All for Mothers, a platform to signify the universal motivation and collaborative approach of the initiative. A launch film was needed to inspire our audiences.

With the All for Mothers theme, we created an anthemic video, used to drive home the ambition of the initiative, having broad usage and appeal. We found inspiration in a word that is universally connected with giving birth, it also become the CTA 'Let's PUSH until all maternal mortality is a thing of the past.'

The idea was to give a universal yet personal view of the journey to motherhood, allowing people to walk in the shoes of pregnant women. Three distinct stories are woven together creating a rich, emotionally arresting and real portrait of pregnancy. You can experience the joy, fear, daily determination and heartache. The result is a beautiful tapestry of experiences that make a compelling appeal for why this private sector effort is so vital and worthy of attention.

We established specific goals of the film which were to:

The audiences were numerous including maternal health advocates, potential private sector partners and employees, media and the general public.

MFM already had an eco-system of communication that illustrated the facts of the issue and laid out programmatic plans and success. They had mastered the operational side of communications effectively but it lacked an empathetic component to truly allow people to connect with the cause at a more visceral level.

We wanted to bring more humanity to the communications and create a powerful piece that would remind those audiences: every woman deserves to feel joy for the new life she is bringing into the world, not fear for their own.

The film launched at a private screening at Davos in 2017 to a room of potential partners, policy makers and influencers.

It was then shared a select group of Merck and MSD's employees, partners and ambassadors prior to launching publicly on International Women's Day in March of 2017.

Key influencers like Heidi Murkoff of What To Expect, and New York Times best-selling author and maternal health advocate Matt Logelin were leveraged to share on their social channels and existing partners like the Melinda Gates of the Gates Foundation and Christy Turlington's Every Mother Counts to drive further reach through their networks.

It is being used for all keynote appearances, conferences and meetings throughout the year globally - most recently being Aspen Ideas Festival.

PUSH is the most viewed video in Merck's history.

Within 1 hour after launch, PUSH had surpassed Merck's previous benchmark for video views and after 5 days the minimal paid support was stopped as the views had exceeded all expectations. Since then, the video has attracted unprecedented views and over 2.5M people have watched it across platforms.

Merck leadership continues to show it at internal and external events. The Executive Director of the program, Dr. Mary-Ann Etiebet, describes the impact so far: "The emotional connection it has with the audience is visible, audible and palpable."