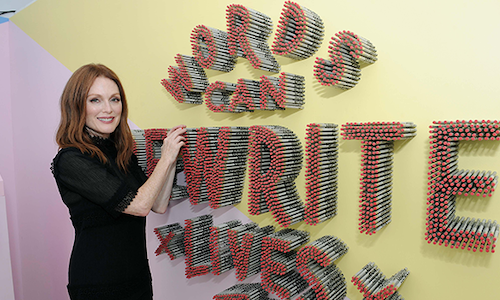 Project Literacy is a movement of 100+ diverse partners (corporations, charities, social enterprises, and government bodies) convened by Pearson to tackle illiteracy on a global level. Its aim is to raise awareness of the issue, driving action that makes significant advances in the fight against illiteracy.

We launched the Alphabet of Illiteracy campaign in the UK in February 2016 to great success - it generated huge amounts of conversation online and social listening identified that people were talking about the difference literacy could make to people's lives. For our US launch we wanted to harness this momentum by creating a simple mechanic to turn the support from the public into messages of support on Project Literacy's website, that could also be promoted across a range of social platforms, and ultimately give back to our partners; turning digital messages into real-world help.

The target audience was Millennials in the US, with a physical exhibition space in NYC targeting a more affluent and active segment of the audience.

The brief was for a digital activation that could also work in the real world.

The campaign came to life in four stages:

1. Influencer Launch - Julianne Moore launched the Mighty Pencil Machine on the ground in New York. 25 other major celebrities including Idris Elba, Elton John and Usain Bolt pledged their support of the campaign across their social presences by "adopting" a letter of the "Alphabet" associated with the cause they are most passionate about. This helped us achieve a massive spike of fame, generating significant PR coverage.

2. Online Messages of Support – People were then driven to an online experience to add their messages of support for people learning to read and write.

3. Pencil Machine Exhibition – Real pencils were then created at our exhibition space in New York using the online support message submissions. We livestreamed the exhibition across Facebook, Twitter and YouTube to further close the gap between the online audience and the New York exhibition.

4. Literacy Programmes – The pencils were then passed onto our literacy partners to be used by people learning to read and write.

To generate mass awareness; global and specifically US media attention and incite widespread action on International Literacy Day, 26 of the highest calibre celebrities championed a letter of the alphabet highlighting a word which is an associated cause of illiteracy eg A is for AIDS.

We aimed to break into the day's news cycle, giving Project Literacy and our lead celeb ambassador the news hook and the platform to explain the fully integrated campaign to a global audience - and bring to life in NY on the ground activation.

We launched Project Literacy to the U.S. audience with a social-first idea to leverage powerful voices: 26 celebrities volunteered to champion the Alphabet of Illiteracy in a mass social media activation. Each "adopted" a letter, based on the cause they are most passionate about. The names – including Elton John, Emma Watson, Julianne Moore, David Walliams, Sting, Idris Elba, Usain Bolt and Gillian Anderson – all tweeted a powerful stat from the Alphabet on International Literacy Day, 8 September 2016.

In addition we built "The Mighty Pencil Machine" – a highly customised machine that turned these and other online messages of support into real pencils that would be used to tackle illiteracy via our Project Literacy partners.

The campaign crossed from the digital world into the physical with an exhibition space in New York where actual pencils were created from digital messages of support and then passed onto literacy partners.

We used our existing online community of 250k+, our literacy partners and high profile influencers (such as Emma Watson and Julianne Moore) to drive people to give their messages of support to the campaign. Twitter was our most useful influencer platform and this conversation spread to Instagram and Facebook. 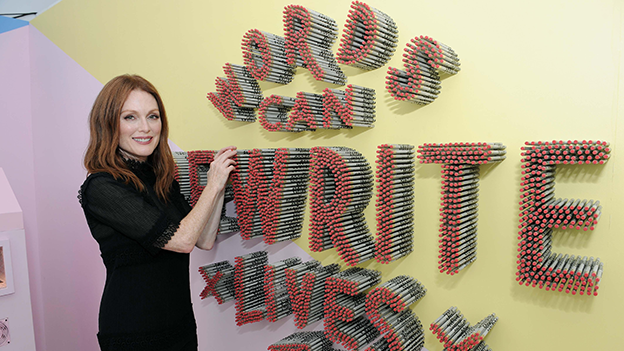 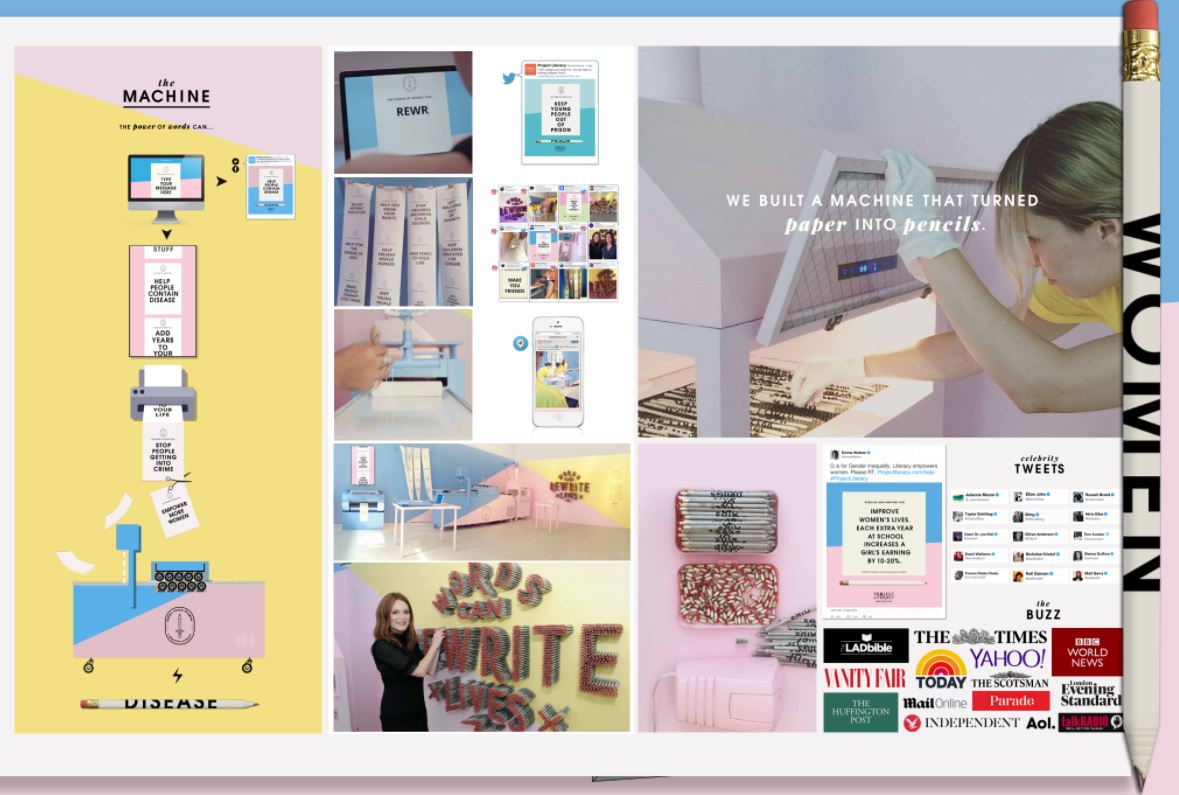 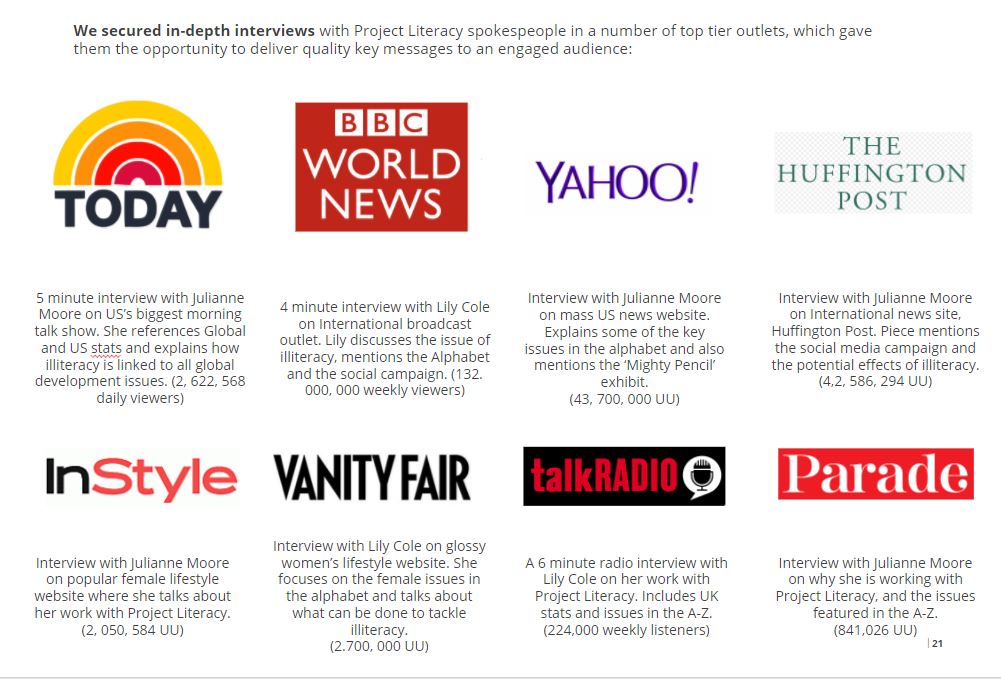 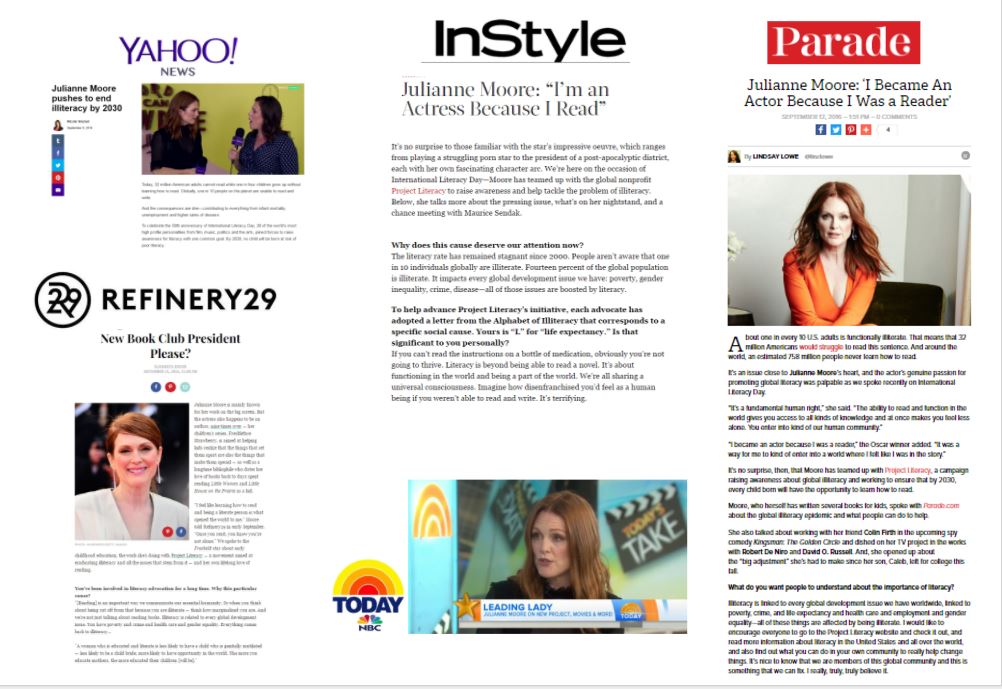 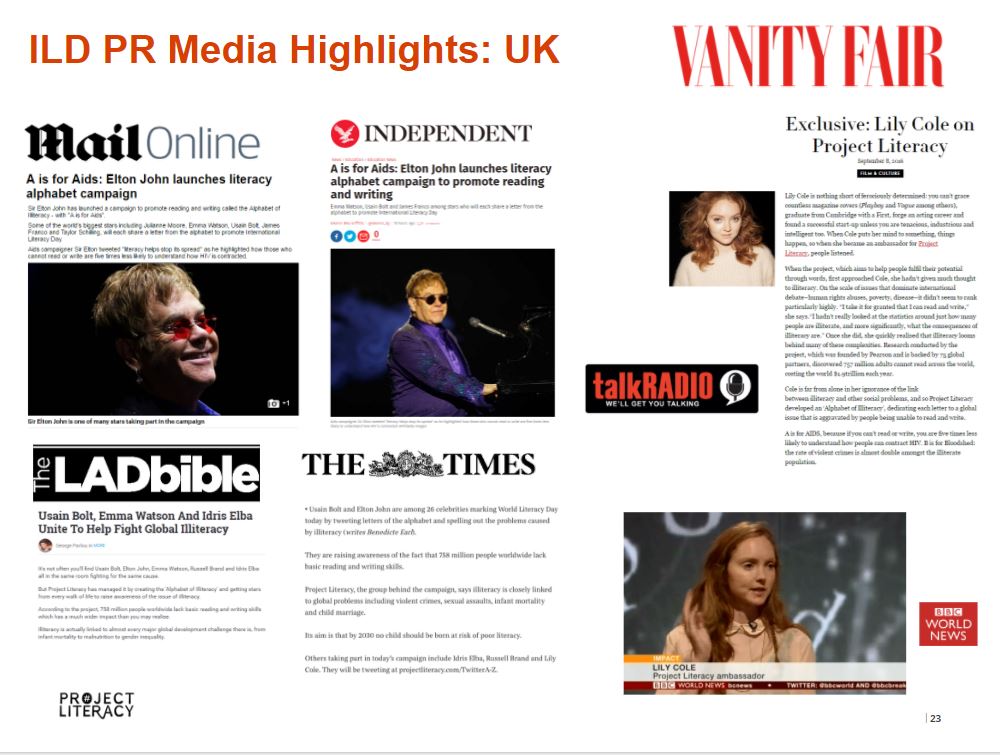