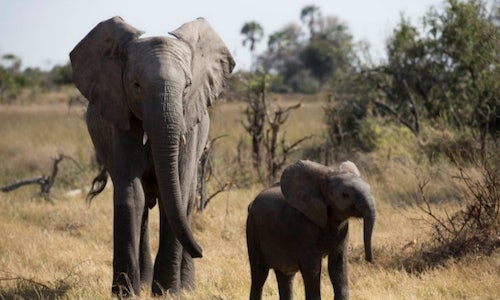 Poachers in Africa slaughter an estimated 100 elephants every day and represent the single greatest threat to the iconic species. The once abundant population has been reduced to less than half a million. If poaching continues at the current rate, more than 50 percent of Africa's remaining elephants could be killed in the next 10 years.

To combat this conservation challenge and raise awareness around the urgency of the elephants' peril, Paul G. Allen and his team at Vulcan Inc. took a multi-faceted approach to saving this iconic species. At the center of these efforts was the creation of the Great Elephant Census, developed to establish the first-ever continent-wide baseline for the savanna African elephant population using standardized and validated survey methods. The purpose of capturing and publishing this data was to provide African park authorities, policy makers and conservationists with accurate, reliable population data to help set clear priorities, invest resources more wisely and influence policies to save one of the most noble and endangered creatures on Earth.

This massive endeavor was carried out with more than 90 scientists and support from national parks, wildlife staff, nonprofits and governments in 18 countries throughout Africa. Through unprecedented cross-border collaboration, the team successfully completed an unprecedented aerial survey spanning 463,000 km over the course of two years to catalog savanna African elephant populations.

GEC results – which showed a significant 30 percent decline in African savanna elephant populations in countries surveyed – were announced at the International Union for Conservation of Nature World Conservation Congress Conference (IUCN WCC) to spur dialogue throughout the conference and ultimately influence the adoption of domestic ivory bans worldwide. To ensure results were seen by a global audience of policymakers, science and conservation thought leaders, and engaged consumers, a full social and earned media campaign was implemented to help share GEC results with the world and inspire leaders to take action to protect the species for generations to come.

Data is most compelling when it tells a story. By developing and activating a data visualization website, www.elephant-atlas.org, the data were brought to life and cross referenced with other country-by-country political and social milestones that impacted elephant populations over the years. This website complemented the Great Elephant Census website that articulated the tremendous efforts of our scientists and NGO partners.

The website also served as a source for scientists, policy makers and other engaged influencers to access and use the data to support their conservation efforts.

The team also inspired audiences through social engagement, generating awareness and driving traffic to the Great Elephant Census website through –

Promoted tweets from the @ElephantsCount Twitter handle that resulted in more than 1,165 click-throughs to the site.

Shared media assets were utilized throughout coverage and customized to create additional graphics or interactive maps that added depth to more than 720 articles that resulted in a potential audience reach of over 1.5 billion.

The press release was distributed via PR Newswire and attracted interest from international news organizations and resulted in 444 pickups.

To create even greater public engagement on the elephant poaching crisis, Paul Allen partnered with the Guardian to support a closer look at the global ivory and element crisis. The Guardian reporting through 2017 generated nearly 900,000 page views and moved the conversation forward with a deep dive into the causes and exploring potential solutions. Additionally, Paul Allen's Vulcan Productions released two films in 2016 – "The Ivory Game," produced with Leonardo DiCaprio is a feature-documentary about the dark world of ivory trafficking; and "Naledi: A Baby Elephant's Tale," the true story of a baby elephant orphaned in Botswana.

The scientifically credible results were undeniable and generated global headlines that captured the attention of policy makers worldwide. The census inspired a renewed call to end the illegal ivory trade and to engage in conservation efforts that matched to the documented need. GEC results were instrumental during the deliberations of the IUCN's motion 007: Reliable GEC data allowed policymakers to advocate for a stronger response to illicit ivory trafficking and passed the recommendation for a global ban on domestic ivory trade. GEC results became so endemic to the conservation and policy communities that they were ultimately used to successfully pass ivory trade-restricting resolutions during the Convention on International Trade in Endangered Species (CITES) meeting. On December 30, 2016, history was made when China announced it would shut down the trade of ivory within its borders by the end of 2017. China leading the way with an aggressive timeline to close their vast ivory market might be the tipping point that helps save African elephants from extinction.

More than 720 pieces of coverage appeared in top-tier outlets such as AP, BBC, CNN, The Guardian, Mashable, National Geographic and The New York Times and publications amplified coverage on social channels with strong engagement from their audiences. Conversations on social media were equally impactful with 27,180 tweets; 7,015 likes, shares and comments on Facebook; and over 523 million people reached across the two channels; expressing their support for the study and lamenting the loss of elephants to poaching. 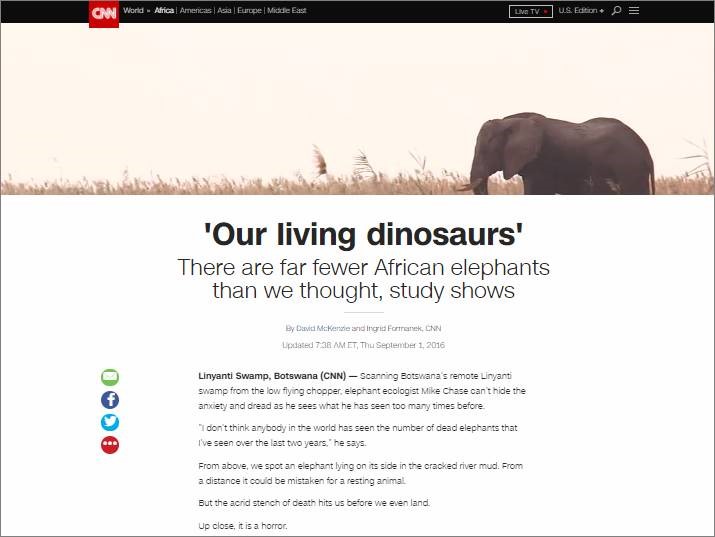 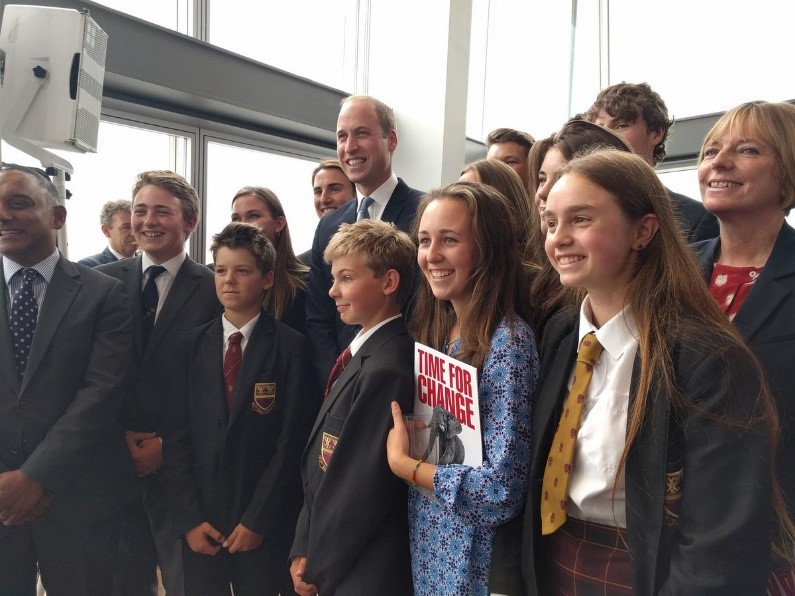 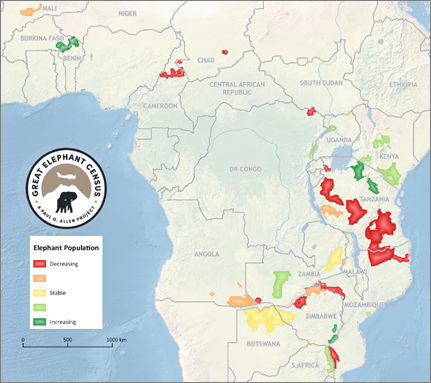 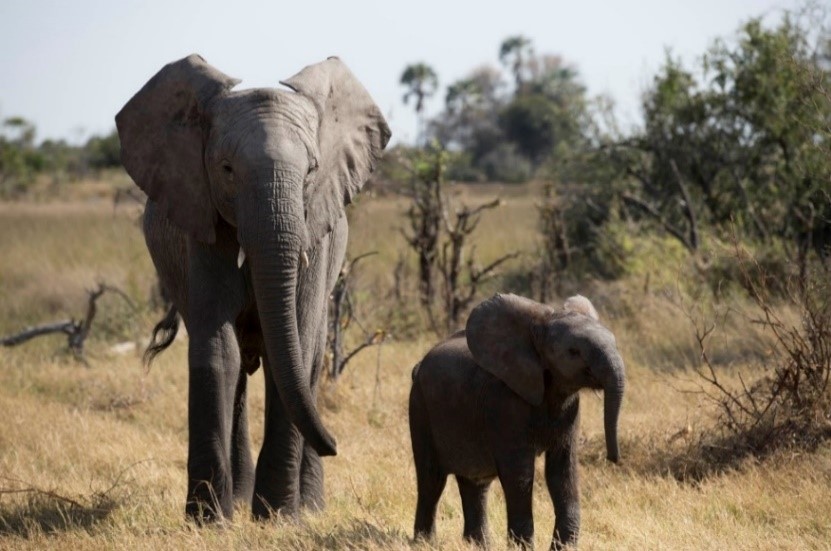 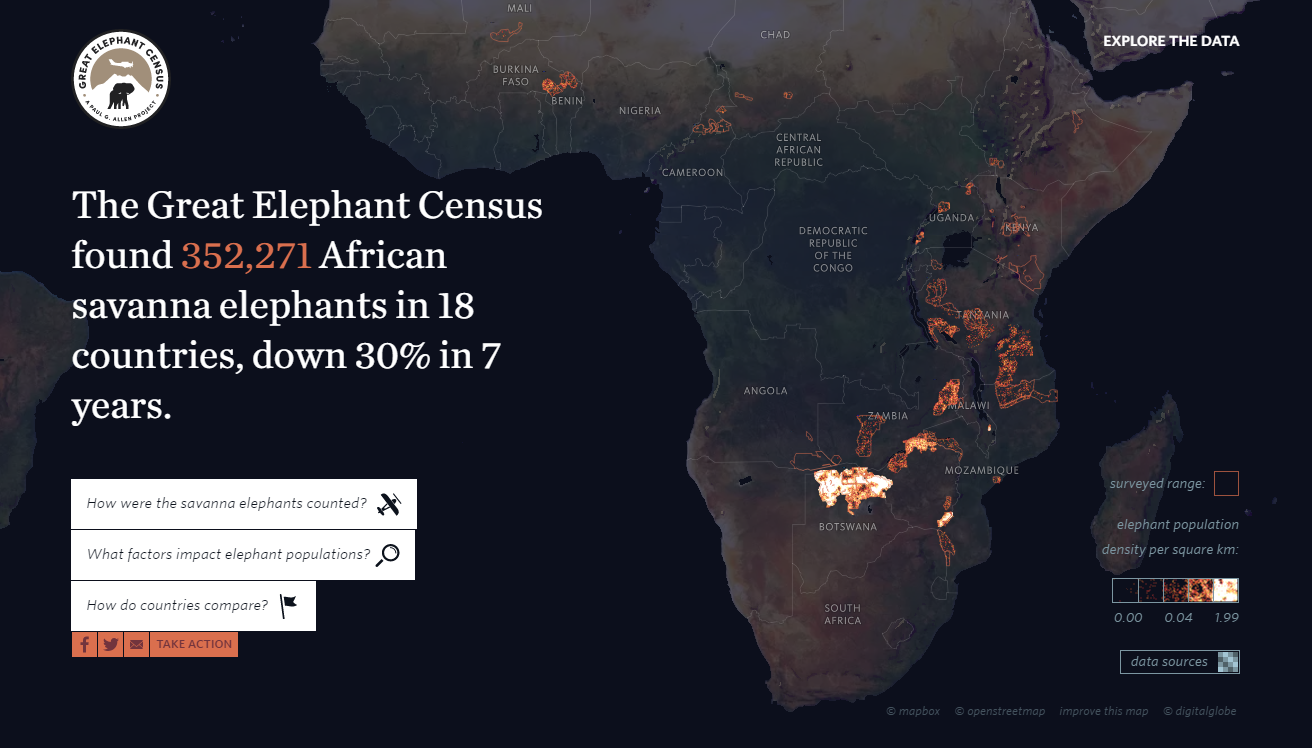