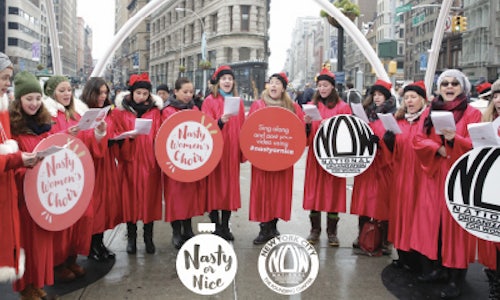 Last November 8th, America elected Donald Trump, who had campaigned to end government-funded birth control. By the time the polls closed, online searches for IUDs spiked significantly, as women sought information on a birth control method that would outlast the new president. In partnership with NOW-NYC, we saw an important cultural moment and opportunity to engage and educate women about their options for contraception, before the possibility of losing access.

When reproductive rights are in danger, we know that interest peaks in long-term contraception. So strategically, we decided to latch onto the post-election (and holiday) atmosphere to engage a receptive audience of women 18-44 with entertainment and education in the form of advertism (advertising and activism).

The Nasty or Nice campaign was implemented over the course of 2 weeks in December 2016. It began by distributing over 5000 "Holiday Gift Guides for Nasty Women," highlighting different forms of birth control as well as a link to a website (www.nastyornice.org) with detailed information on contraceptive methods. In addition to distributing postcards, we created 250 limited edition IUD ornaments to deck some lucky ladies' trees. Next, we formed the Nasty Women's Choir, rewrote Christmas carols like "Hark! The Nasty Women Sing" and "Donald Trump is Coming to Town," and invited women everywhere to sing along through social media or in person as they caroled around Manhattan on 12/17.

Despite some nasty weather, hundreds of nasty women showed up to the Nasty Women's Choir caroling event on 12/17. The event was covered by New York Daily News, Newsweek, the Observer, MTV News, and Elite Daily. With less than $1000 in media budget, and in less than 2 weeks, the campaign got 350K video views, increased NOW-NYC membership by 300%, got 420K Facebook impressions (over a 600% increase) and 160 million total media impressions. Most importantly, we contributed to a conversation about long-term contraception, doing our part to help the number of IUD insertions increase by 19% since the election. We guaranteed that no matter what happens during the next four years, nasty women across America will be more informed, more prepared, and more empowered.

Video for Nasty or Nice 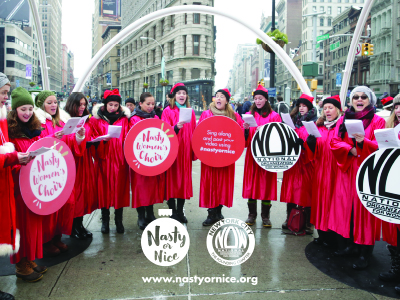