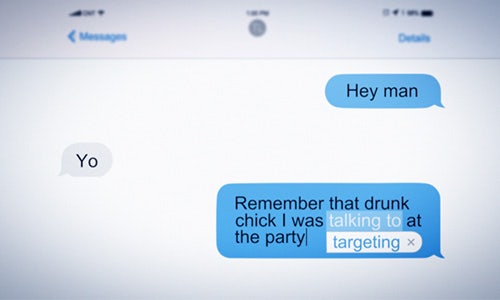 IT’S ON US: Autocorrect

Language is one of the most significant factors perpetuating rape culture; not only can it distort exchanges of consent, but it can also be used to downplay the gravity of sexual assault and desensitize people to its occurrence.

The recent U.S. Presidential election highlighted the magnitude of this issue. When a video emerged of then President Elect Donald Trump bragging about grabbing women "by the p***y", we saw the urgency to clarify that this is not just "locker room talk" and how the words we use shape our culture.

Autocorrect leverages the highly familiar and relatable medium of texting to put a spotlight on the impact of language and how it can be manipulated.

The spot shows a conversation between two college-aged men and puts a spin on the autocorrect function of iMessage. While the two friends jokingly discuss what would have been a "good time" for one of them with a woman that just needed a bit of "encouraging (coercing)", certain phrases and words are auto-corrected to illustrate the real transgressive nature of the student's behavior as well as the misleading recounting of the interaction.

The lens through which we see the potential rape play out illustrates how misleading and dangerous seemingly innocuous conversations can be. By highlighting the subtext of these problematic yet commonplace conversations, the spot encourages people to take a step back and think about the role language plays in perpetuating rape culture.

Video for IT’S ON US: Autocorrect 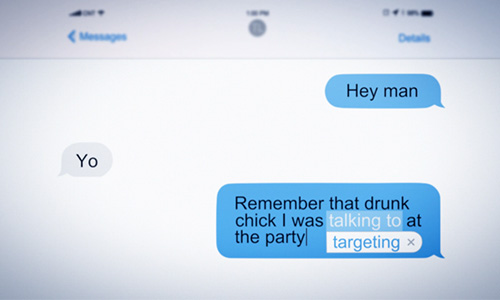 Civic Nation, Mekanism, Sister Studios, The Artery VFX, BAM Studios, It's On Us