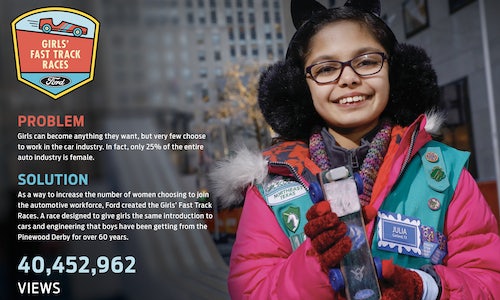 Ford has long championed gender equality within their ranks. It makes sense: to build vehicles that meet the needs of all consumers, it is crucial that the people designing, engineering and building these vehicles reflect the people who buy them. However, women are underrepresented across all STEAM fields and scarce indeed in automotive, where women make up only 25% of the overall industry workforce – a number unlikely to change unless more young women and girls are exposed to this male-dominated field.

Our challenge? Find a way to reach young girls and get them open and excited about the possibilities of a career they may have never considered.

The reality is, conditioning that "girls aren't good at ____" starts at a very early age; some studies suggest by the time a girl is 7 or 8, they've already started to believe that certain skills or subjects are for boys and others for girls. As they grow, this belief can affect confidence and performance. "Math is for boys" leads to "I am not good at math because I am a girl." Recent efforts by educators and corporations to achieve gender parity in STEAM education is paying off, with near equal numbers pursuing studies in this area. But within engineering, whether due to lack of exposure or lack of confidence in her capabilities, boys are 6 times as likely to choose courses in engineering than girls and only 19% of girls go on to achieve a bachelor's level degree in any engineering field.

With the Fast Track Races, we set out to reverse the societal messages of "girls aren't good at ____. By exposing younger girls to the experience of designing, building and racing their own wooden cars – an experience long available to boys – along with expert mentoring and support from female Ford engineers, we sought to open up new worlds and help girls feel they are just as capable as any boy.

In the U.S., the Boy Scouts have long had a tradition of Pinewood Derby races. But until now, Girl Scouts haven't. Maybe this helps explain why the auto industry is such a male-dominated business. Well, we wanted to change that. So we created the Girls' Fast Track Races. Aiming to give girls the same introduction to engineering and cars that boys have been receiving for years. The program spanned from September to February. It launched with tips and tricks videos and workshops lead by Ford engineers, both designed to help girls prepare their cars to race. Starting in October, regional events were held in cities across America, giving hundreds of girls the chance to race for the first time ever. To close out 2016 and kick-off year two of the program, in February of 2017, four Girls Scouts were invited to race live on the Today Show.

It wasn't enough to limit our efforts to build the confidence and curiosity of a few hundred young girls through the experience of designing, building and racing their own wooden cars. We took the message nationwide by telling individual girl's stories, showing race results from each event, providing the tips and tricks (with a helping of science education) and topping it all off with a finale race, live on the Today show with NASCAR driver and role model in her own right, Danica Patrick as officiant.

While numbers were impressive, with 40,452,962 views and 214,987,980 impressions, the most important thing to us was the impact it had on hundreds of girls across America. The excitement on their faces was pure joy. And, if this program opened new career possibilities in the minds of even a few of those girls, it was a success. This year the program is expected to, at least, double in size. After the Today Show, Girl Scout councils from all over the U.S. called requesting races in their regions. To make that a reality, a national partnership with the Girl Scouts is currently being worked out. 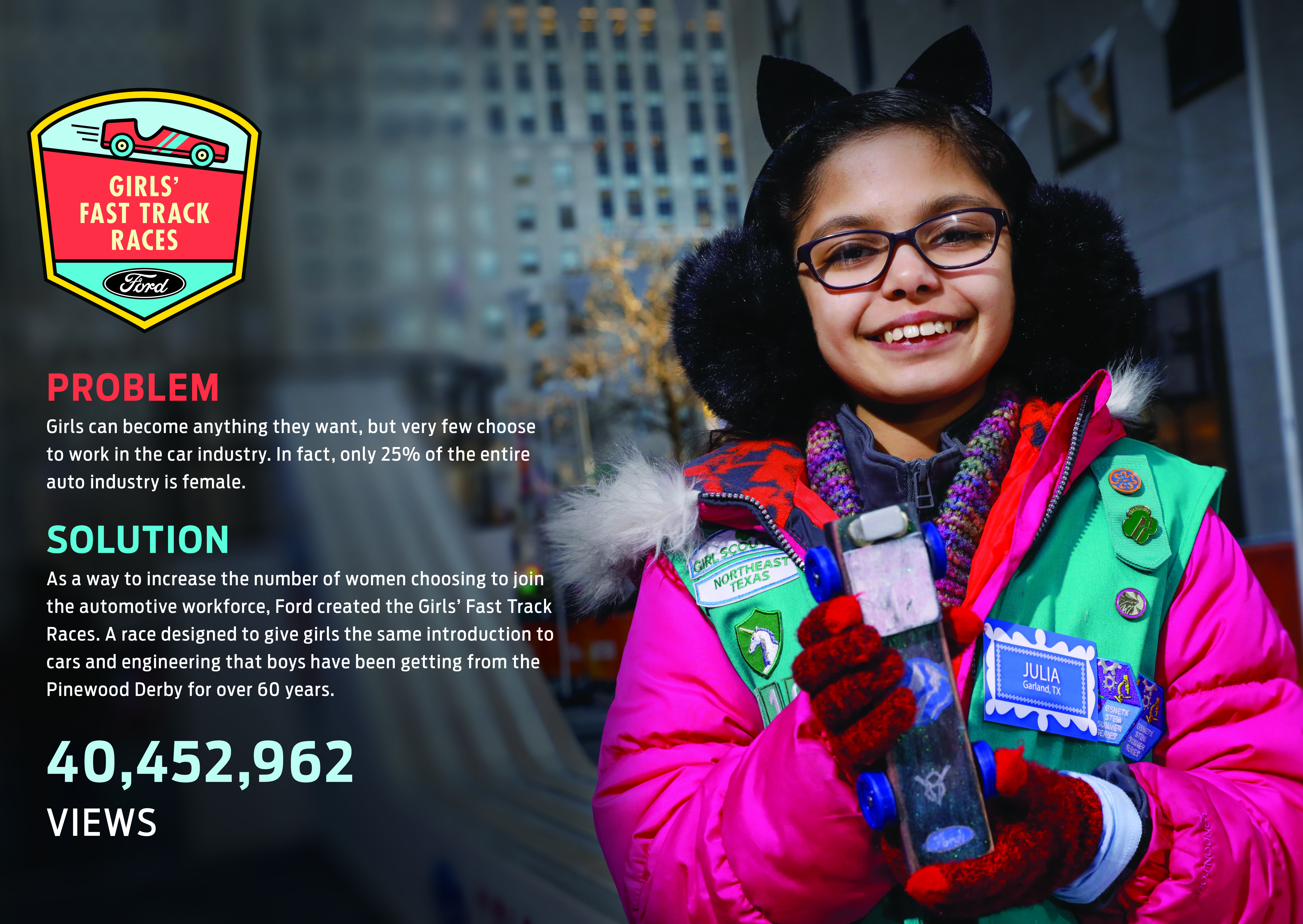 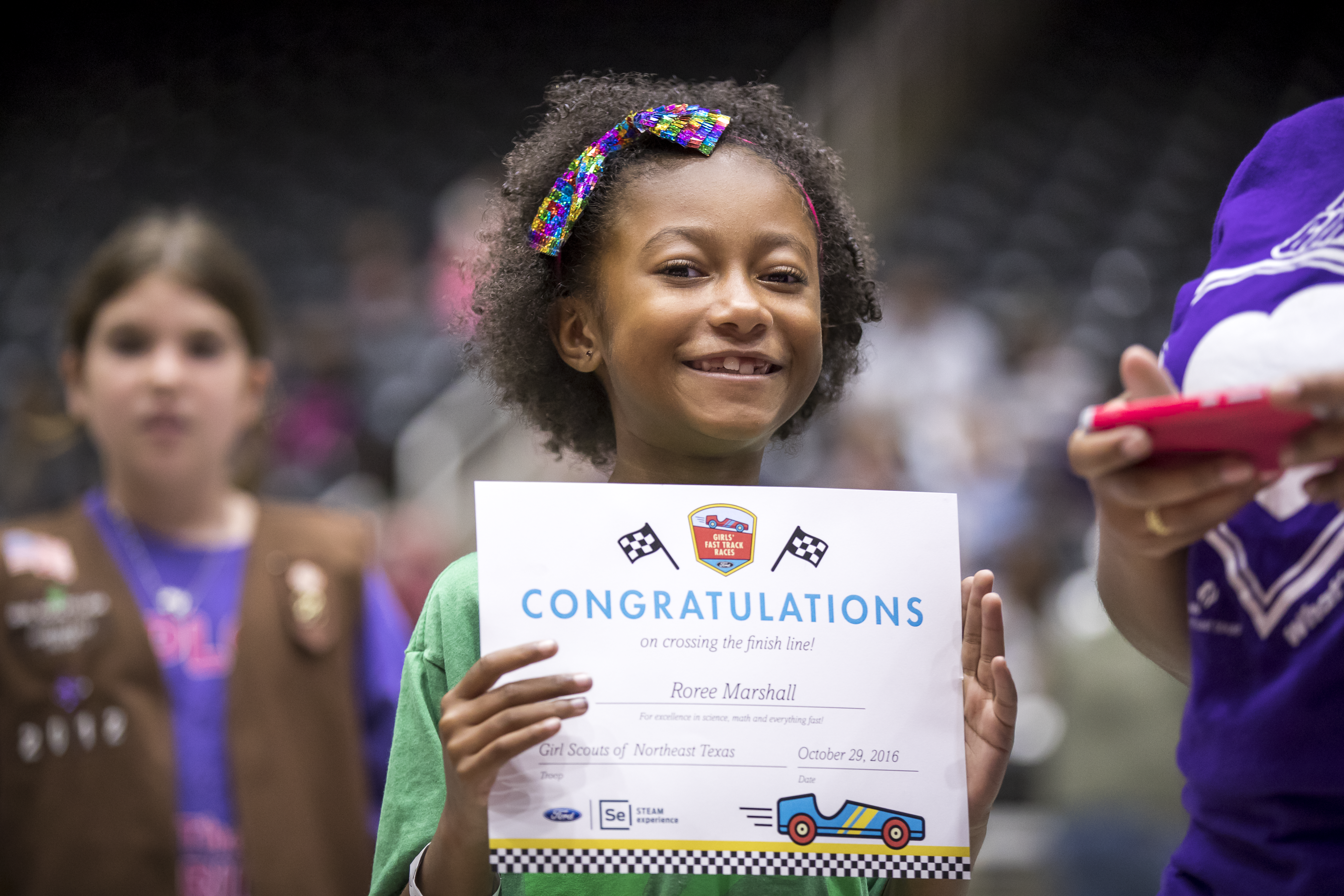 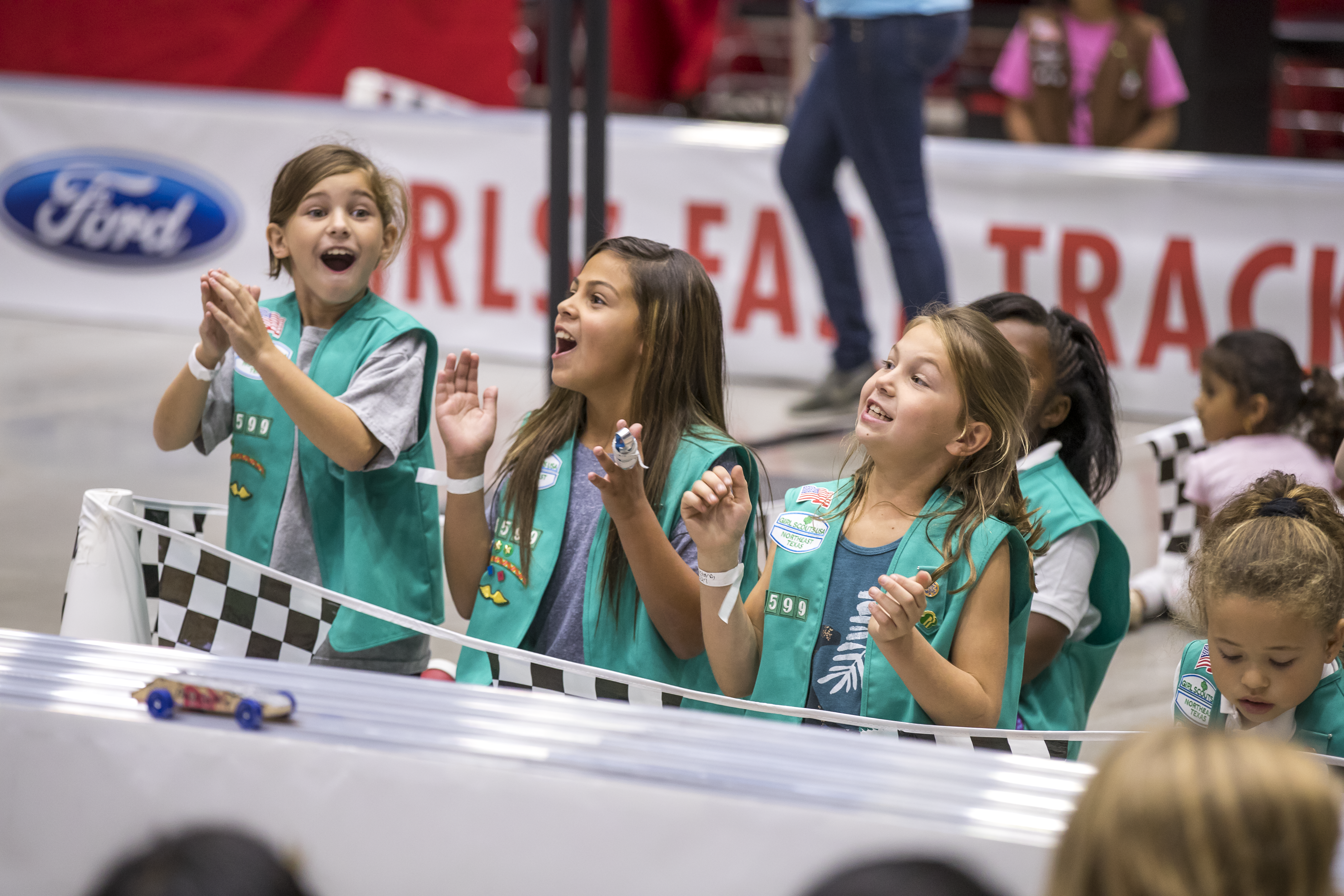 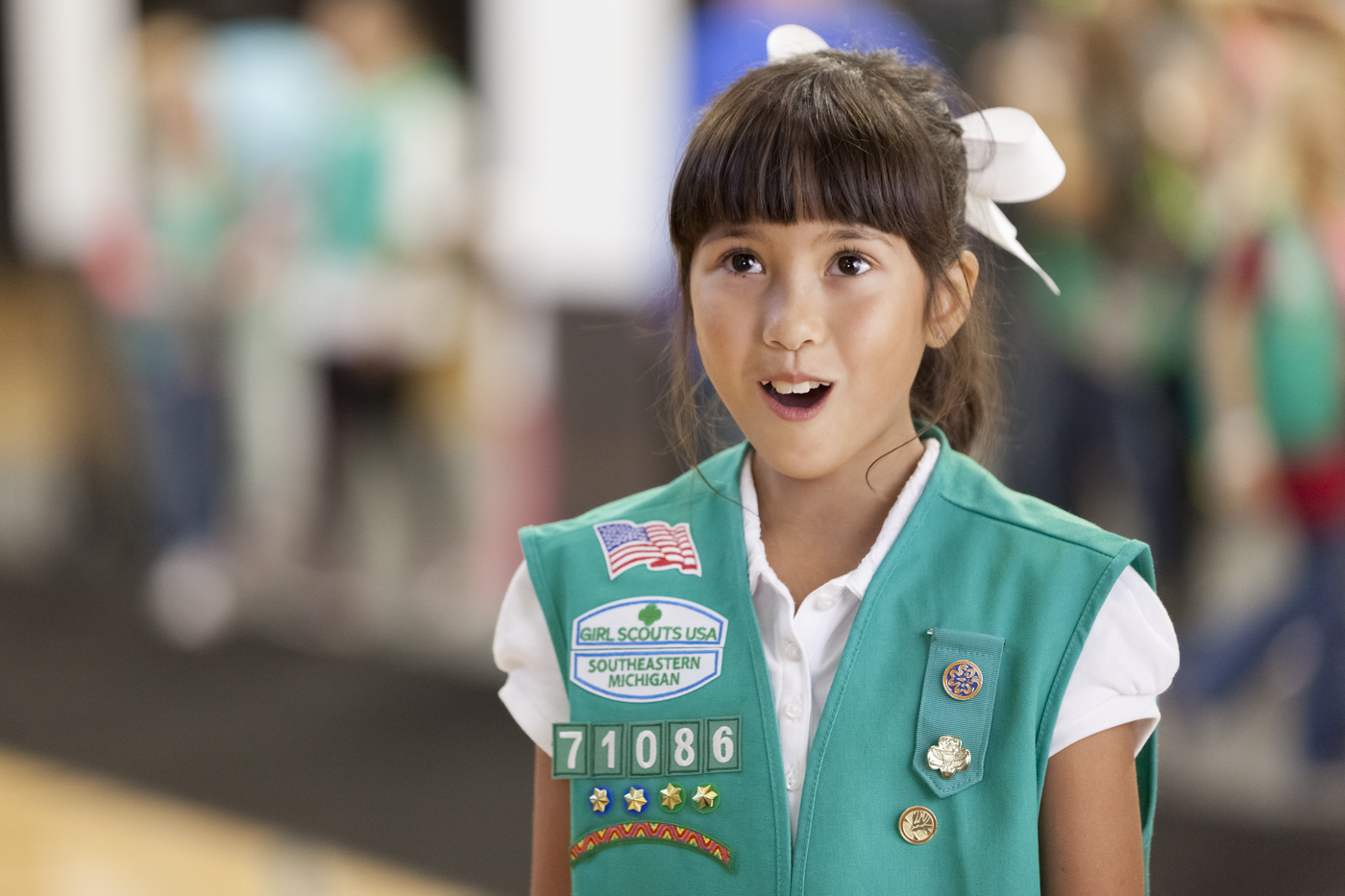 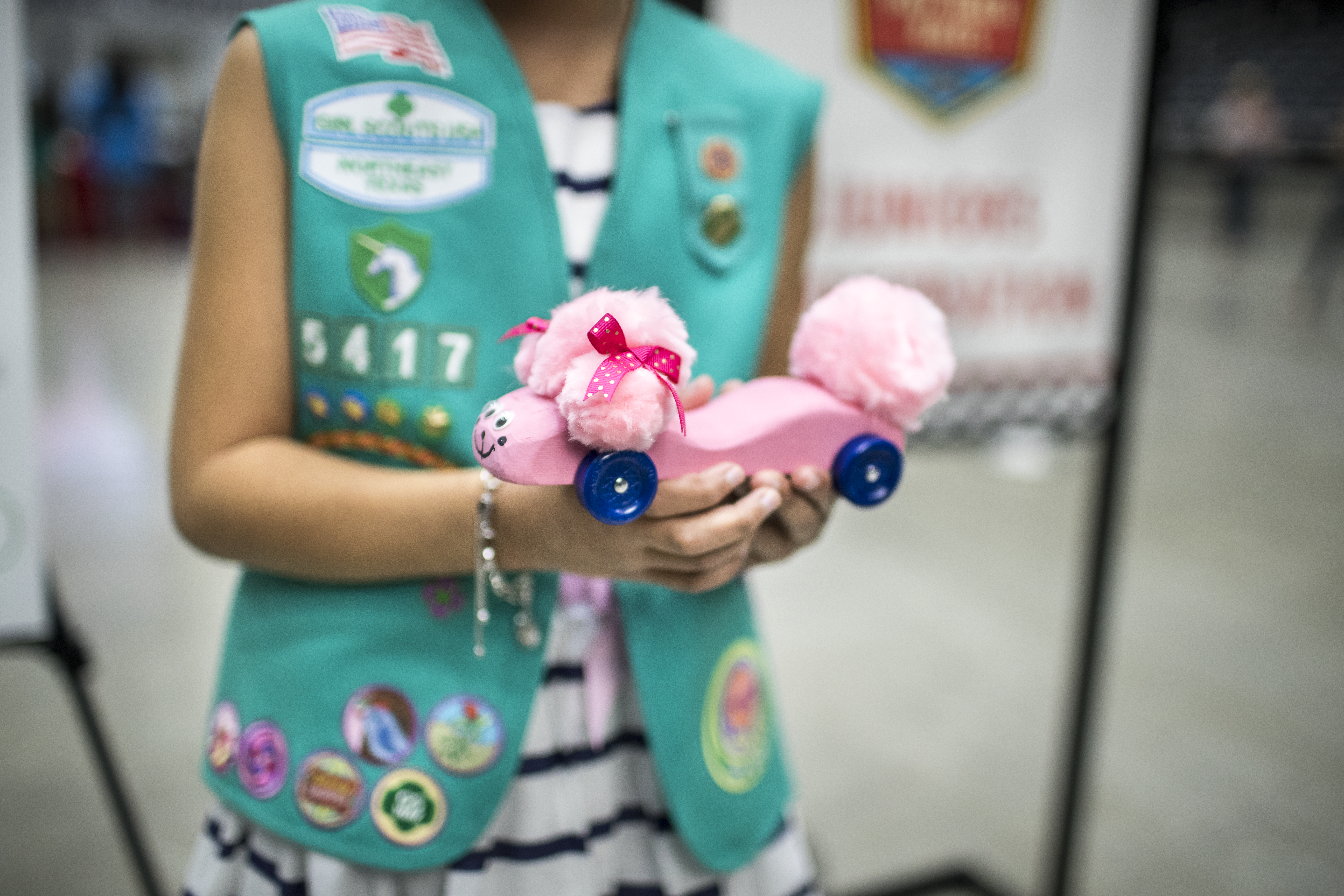