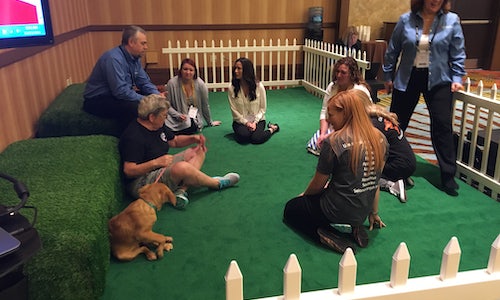 Get Social. Give Back.

The objective of the social media campaign at our annual customer conference, KronosWorks, was to increase the social media participation of our 2,500 attendees while simultaneously raising money for a great cause.

Strategy & Tactics: First and foremost, we had a hashtag (#KronosWorks) so that attendees could discuss the conference before, during, and after the event. In order to encourage more people to tweet/post, we added a charitable angle. For every tweet/post with a photo (on Twitter, Facebook, and/or Instagram) about our conference that included our hashtag, Kronos donated $20 (up to $20,000 total) to Paws for Veterans, a non-profit organization that provides our nation's combat-injured heroes with task-trained medical service dogs as well as supplies, therapeutic group sessions, and natural treatment alternatives. Kronos employees were also on-hand to assist attendees with taking photos, if needed.

The Paws for Veterans service dog area was setup at the front of our conference's Expo Hall. These types of stations are set up at events to reduce stress - everyone loves dogs, and, in addition, photos of adorable puppies almost always tend to go viral on social media. Kronos is a firm believer in work/life balance, so providing a charitable, feel-good element - while also helping to reduce attendees' stress levels - was the perfect way to express this at an event with our customers.

Execution: The first step of the campaign was to promote the hashtag, #KronosWorks. We've been using the same hashtag for the past several years, and the hashtag is the name of the conference, so it's easily remembered. It doesn't include a date so that it can be used throughout the year to continue the conversations.

The next step of the campaign was to pick a relevant charity that people have heard of and also tied to our business. As explained above, Paws for Veterans was the perfect fit for us.

The most important step was to promote the various aspects of this campaign. Before the conference started, people were notified by email, through our social channels, and on our conference website and mobile app of all the activities in this campaign. Since attendees could participate by posting photos on Twitter, Facebook, or Instagram - as well as using our conference-specific geo-filters on Snapchat - we made sure it was clear via signage throughout the conference how they could get involved.

Rich media played a vital role - it demonstrated to attendees the difference they could make with one simple tweet/post after watching Paws for Veteran's video to show how the money would be used.

At registration, attendees received program guides that described all aspects of this campaign – hashtag, charitable donation, and applicable social channels.

We also used Twitter and Facebook advertising to gain more support from our community. Paws for Veterans helped promote the campaign on their social channels as well, expanding our reach even further.

During the conference, we used push notifications about the various aspects of this campaign in our mobile app to catch people's attention. We also made multiple announcements, including a touching one from our CEO in the opening session of the conference.

Due to all of our promotions of the campaign, attendees could not miss it, and it was evident in the results. We received over 2,000 tweets/posts from attendees during the conference, as well as over 5,100 social media interactions. We achieved our goal of $20,000 and donated the full amount to Paws for Veterans. We were blown away by the participation, increase in activity from previous years, and the charity as a whole. Our customers – those who were already social savvy and those who joined Twitter, Facebook, and/or Instagram at the conference so they could participate - helped make this heartfelt campaign a big success!

Video for Get Social. Give Back. 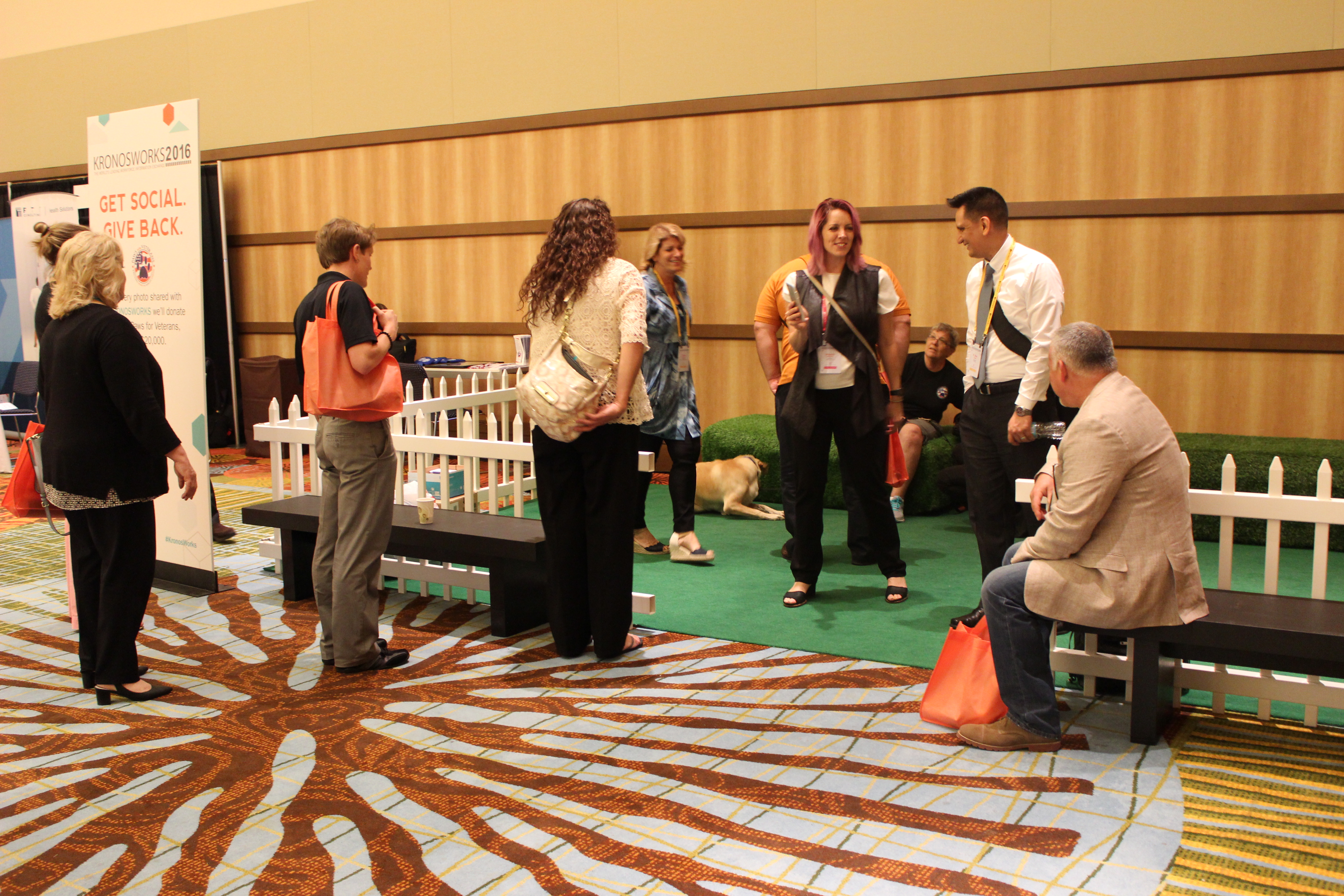 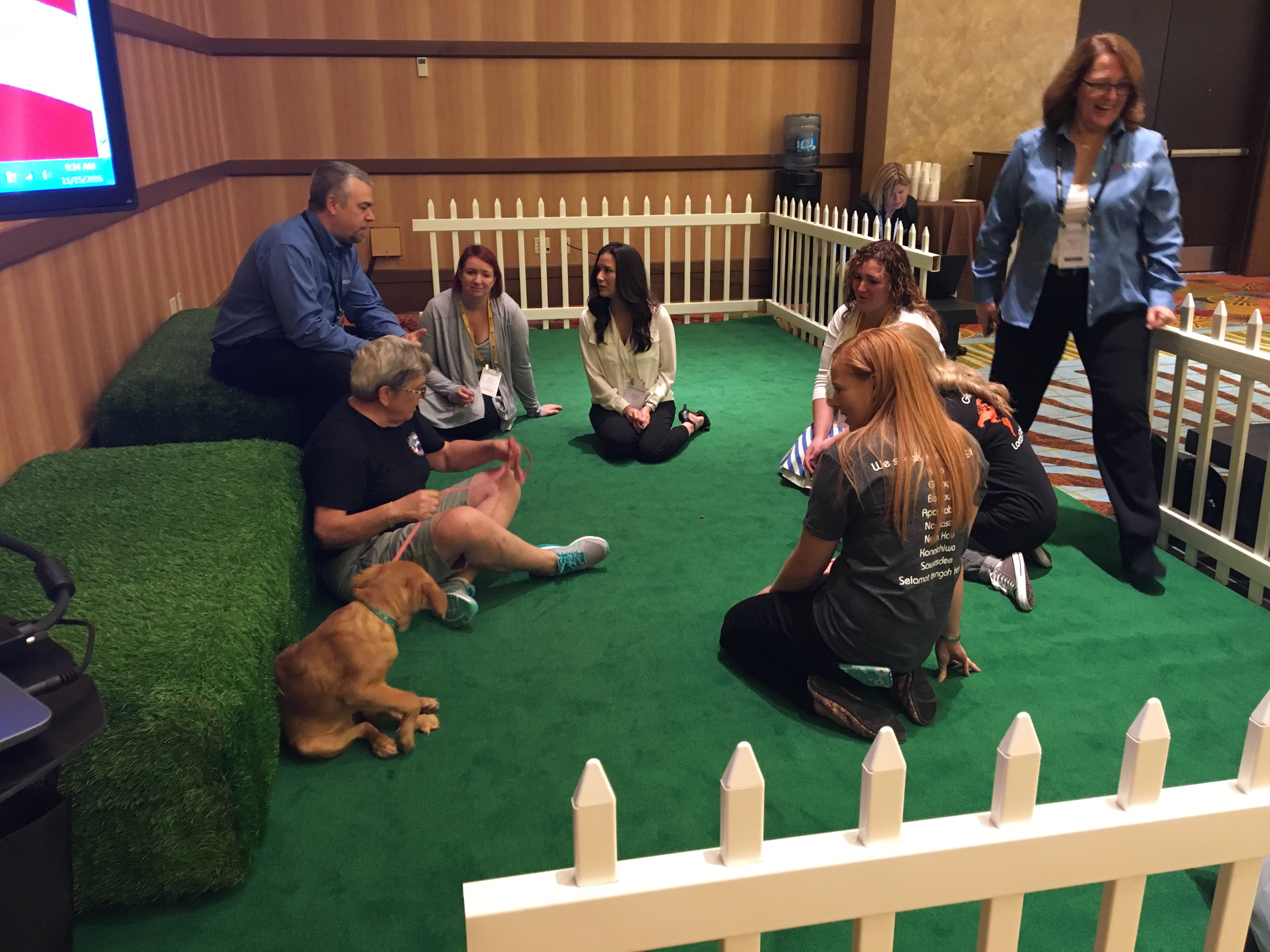 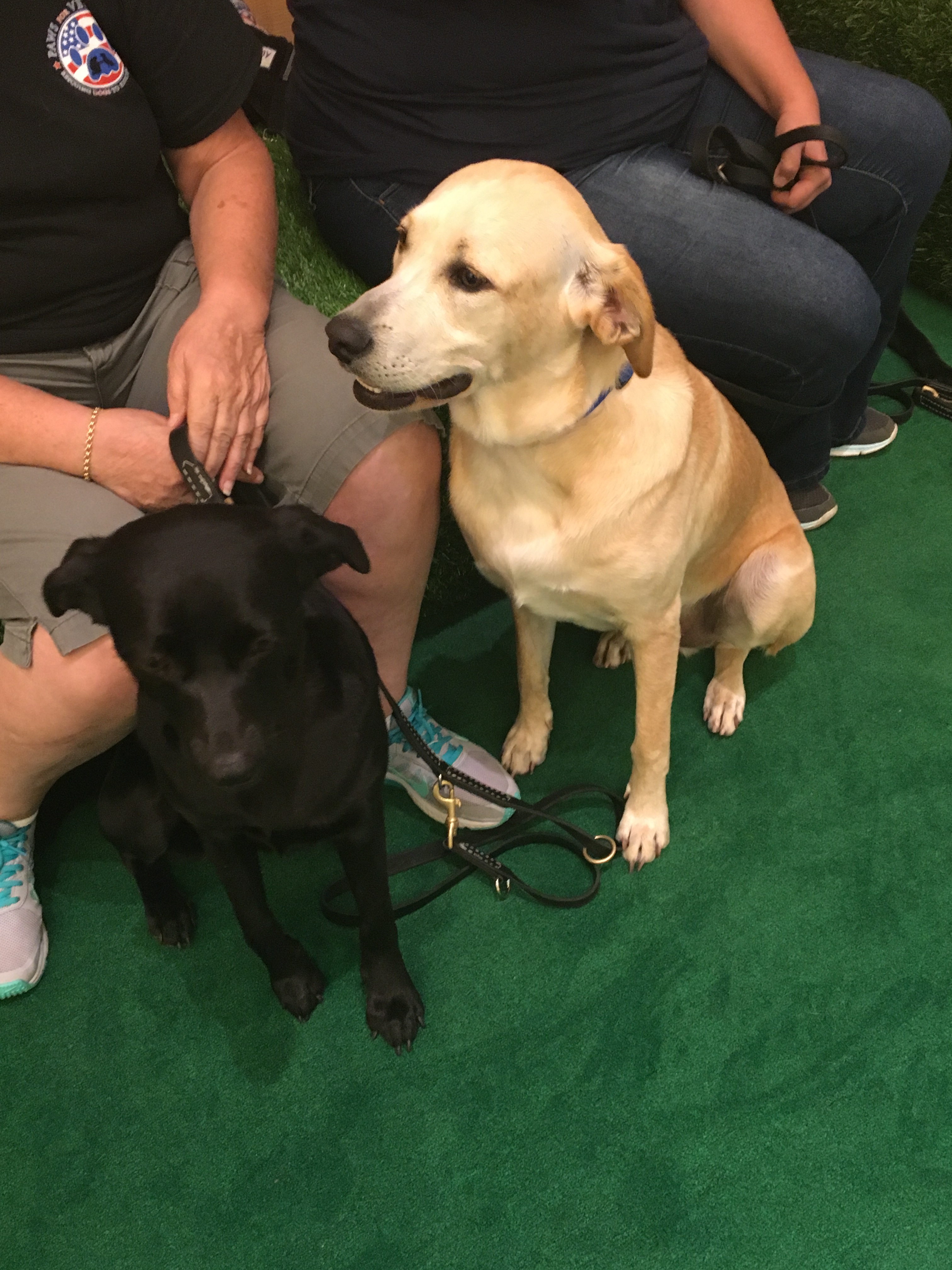 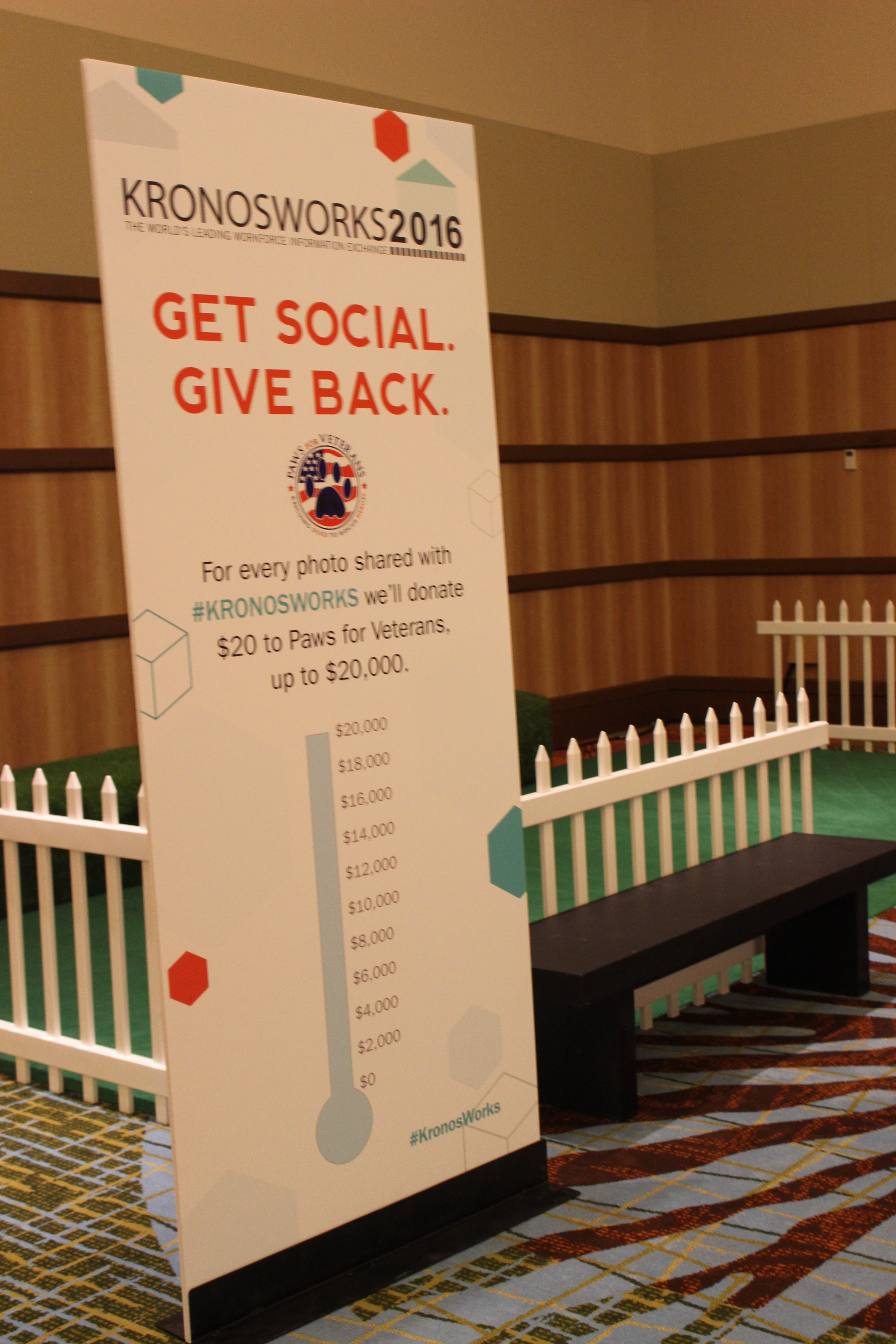 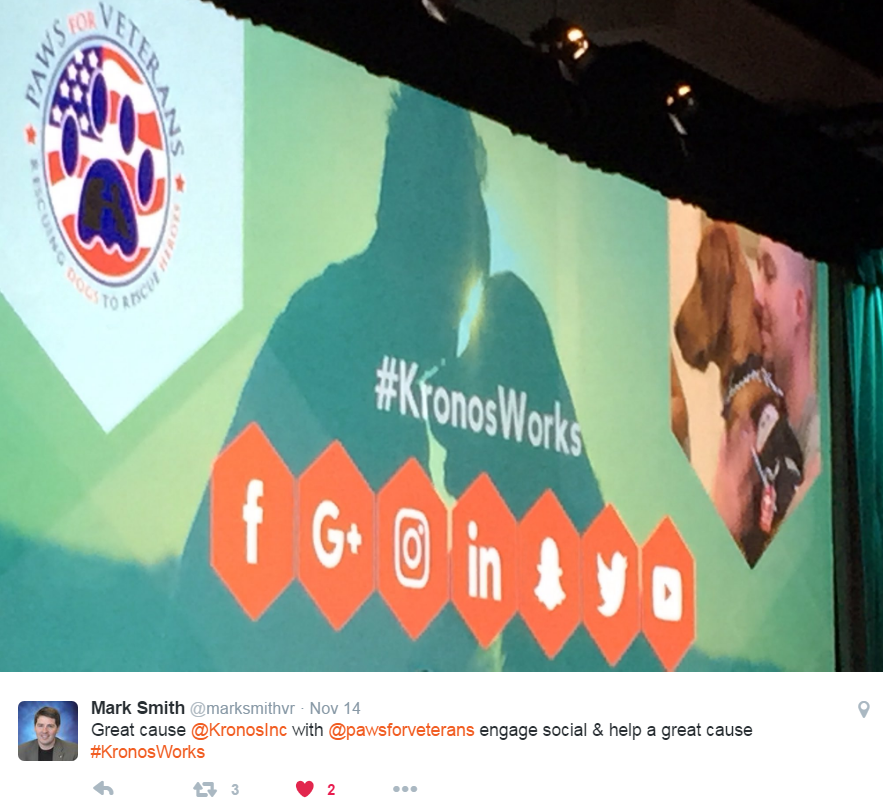