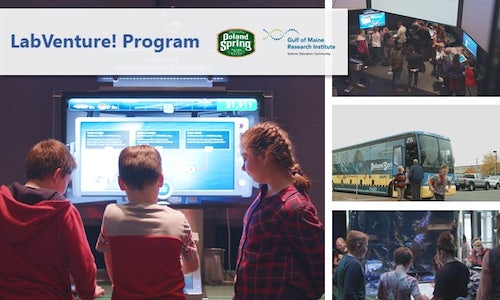 From its beaches to its bays, marshes and scenic byways, Maine is proud of its abundant natural beauty. Today, the children of Maine have the opportunity to learn about the Gulf of Maine's delicate ecosystem, including its natural resources, and to explore important topics like conservation and sustainability. Whether they choose to become geologists or graphic designers, they will feel empowered to preserve Maine's beauty for generations to come.

The Gulf of Maine Research Institute's (GMRI) LabVenture! program, developed and executed in partnership with Poland Spring®, enables Maine's fifth- and sixth-graders to gain a deeper understanding of their role in protecting the state's streams and coastal waters. Encouraging an interest in the environment at a young age is critical for the future of Maine's water and wildlife. By providing school-aged children with an engaging, interactive laboratory experience, LabVenture! aims to inspire a lasting enthusiasm and appreciation for the state's ecosystem and its natural resources. At the same time, the program supports continued learning by providing educators with a variety of resources to help them effectively teach science in the classroom. As the lead sponsor of LabVenture! for more than a decade, Poland Spring® is committed to doing its part to protect the environment, while helping to inspire the next generation of water stewards.

LabVenture! is an immersive science education program that allows fifth- and sixth-grade students from every corner of Maine to become scientists and fishermen for the day at GMRI's Portland facility. Almost every school day, a marine-themed bus transports children from different parts of the state to GMRI for a day of learning, exploration and fun. Upon arrival, students discover the intricate relationship between humans and the environment's natural systems, with an in-depth investigation into the Gulf of Maine's most pressing environmental issues. Students collect data, work collaboratively with each other and solve problems based on real issues GMRI scientists are currently facing in their current research of the Gulf of Maine. Participants leave with the tools and knowledge they need to act as stewards of the environment and to adopt eco-friendly behaviors that support the health of the Gulf of Maine. This program is free of charge for all students.

To encourage continued learning beyond GMRI, LabVenture! provides pre-reading, classroom activities, a suggested curriculum and other post-program materials with teachers that has become an essential teaching tool for school systems across the state.

To generate additional awareness of the program and the importance of the Gulf of Maine's ecosystem, a video highlighting LabVenture! was produced. The video has been posted on Facebook and it is also seen on websites hosted by GMRI and Poland Spring®. The video provides an overview of the program and includes testimonials from LabVenture! instructors as well as students.

Poland Spring® also partnered with WCSH-TV 6, NBC's affiliate for the Portland-Auburn market, which includes southern Maine and eastern New Hampshire, as part of the summer 2017 "Companies that Care" program. The television station developed a 30-second public service announcement highlighting the LabVenture! program that featured profiles of a Poland Spring® natural resource manager (also a professionally certified geologist) as well as a community manager.

The success of the Poland Spring® and GMRI's LabVenture! program in Portland, Maine, has exceeded expectations.

-Since LabVenture!'s inception in 2006, the program has hosted more than 100,000 fifth- and sixth-graders across 16 counties in Maine – that's approximately 10,000 students a year, equivalent to 70% of the state's fifth-and-sixth graders!


-In a state populated by 1.3 million people, the video highlighting LabVenture! has reached approximately 900,000 people in Maine through Poland Spring's and NowThis' Facebook pages. Thanks to additional social sharing on Facebook and Instagram, the video has garnered approximately 8.3 million impressions combined. 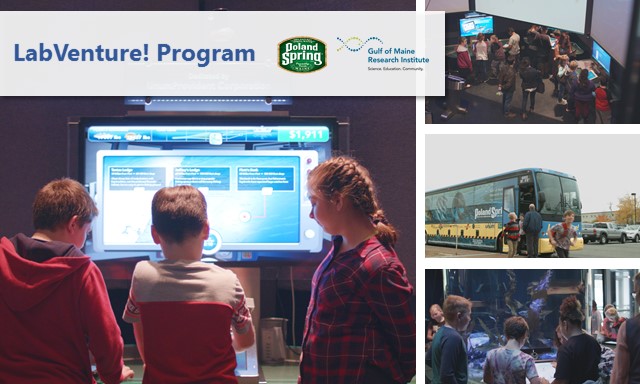