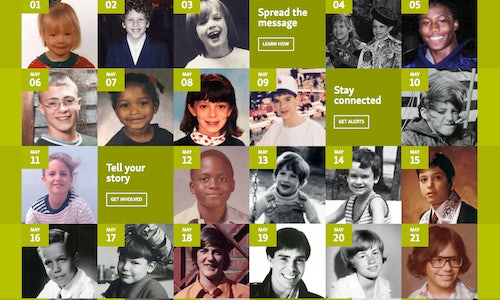 Every day in May, throughout National Mental Health Awareness Month, the Child Mind Institute shared stories from prominent influencers speaking to his or her younger self about growing up with a mental health or learning disorder. #MyYoungerSelf is part of Speak Up for Kids, the Child Mind Institute's annual public education campaign to raise awareness and counter the stigma for the 17 million children struggling with these disorders. Our goal for the campaign was to foster an international conversation about childhood mental health and learning disorders, combat the stigma and shame associated with them, and raise awareness that these disorders are real, common and treatable.

The Child Mind Institute is an independent, national nonprofit dedicated to transforming the lives of children and families struggling with mental health and learning disorders. Our teams work every day to deliver the highest standards of care, advance the science of the developing brain, and empower parents, professionals and policymakers to support children when and where they need it most. Together with our supporters, we're helping children reach their full potential in school and in life. We share all of our resources freely and do not accept any funding from the pharmaceutical industry.

The #MyYoungerSelf campaign aimed to impact the public perception about children and families struggling with mental health and learning disorders — that mental health is just as important as physical health and that children and families should be able to access accurate information and quality care without the fear of stigma. #MyYoungerSelf released one influencer video every day on speakupforkids.org and on Child Mind Institute social media channels including Facebook, Instagram and Twitter. All videos were accessible to like and share through social media and email.

Campaign participants shared videos on their own social media channels, giving our campaign unprecedented reach to new audiences. The campaign offered multiple opportunities to get involved, including signing up for email alerts to see each day's influencer video, accessing invaluable resources on childmind.org for families and loved ones who want to learn more about childhood mental health and learning disorders, and sharing personal stories with the #MyYoungerSelf hashtag.

Millions of people were reached through the #MyYoungerSelf campaign through substantial press attention and social media reach. Press coverage included outlets such as the Associated Press, Rolling Stone, People, the TODAY Show, Good Morning America, Essence, The Hollywood Reporter, Glamour, USA Today, Parents and many more. Upworthy created a video featuring the breadth of our campaign. Reese Witherspoon, a campaign participant, declared the Child Mind Institute her favorite charity on The Ellen DeGeneres Show winning $10,000 for the organization. The New York Times ran 2 PSA ads about the #MyYoungerSelf campaign.

With 44 campaign participants, 7 million video views, 8 million media impressions and a social media reach over 10 million in the month of May alone, we are rapidly growing a movement to end the stigma around children's mental health and learning disorders and providing access to quality information and resources to children, parents and families around the globe. 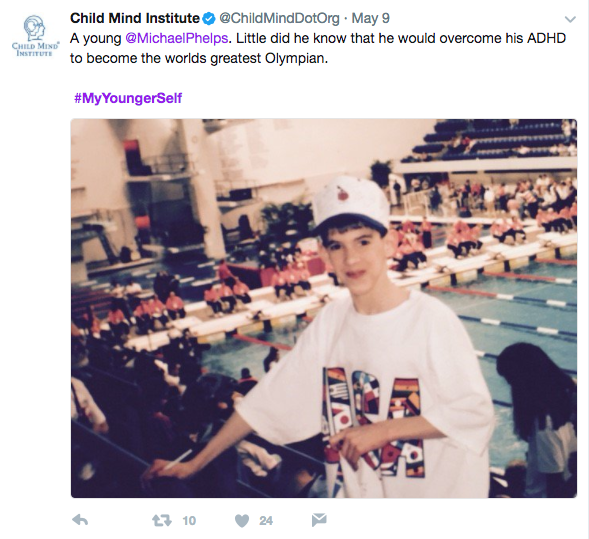 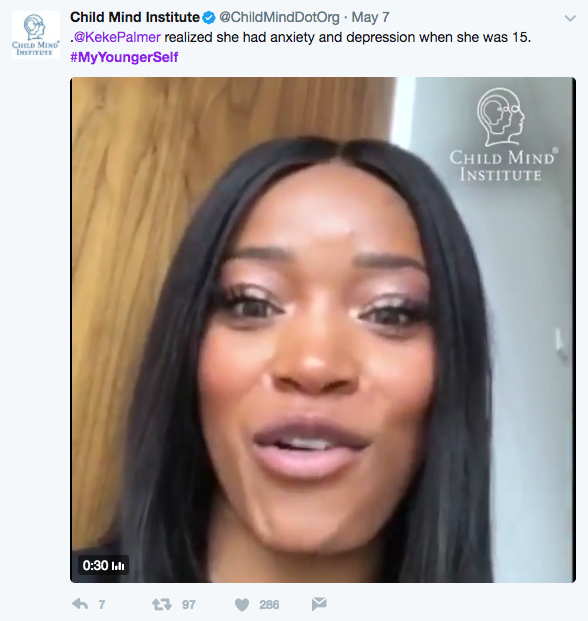 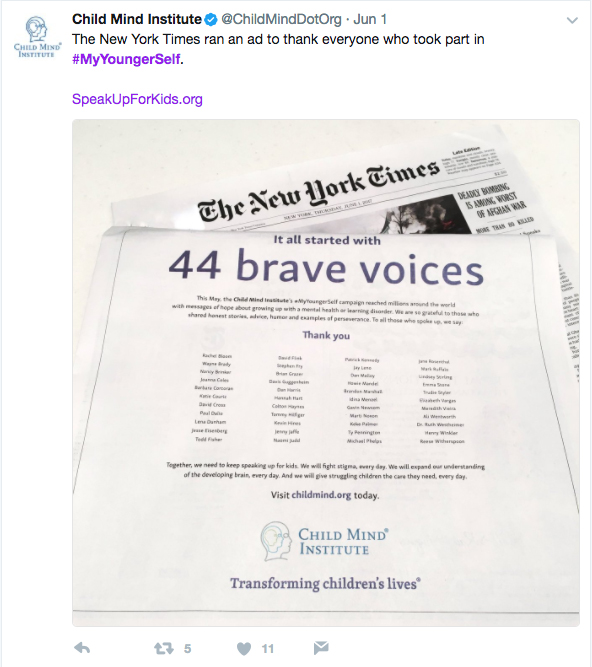 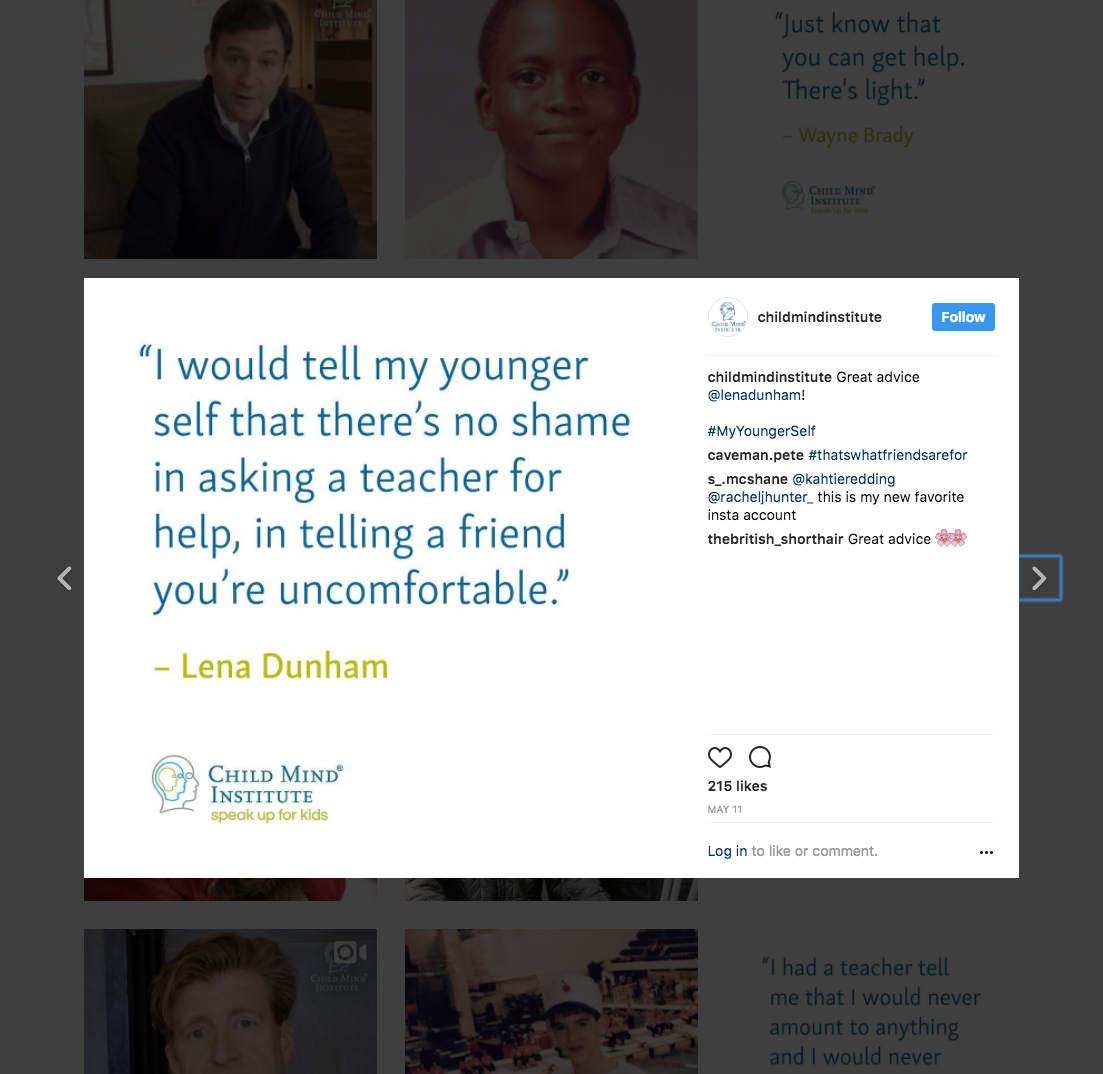 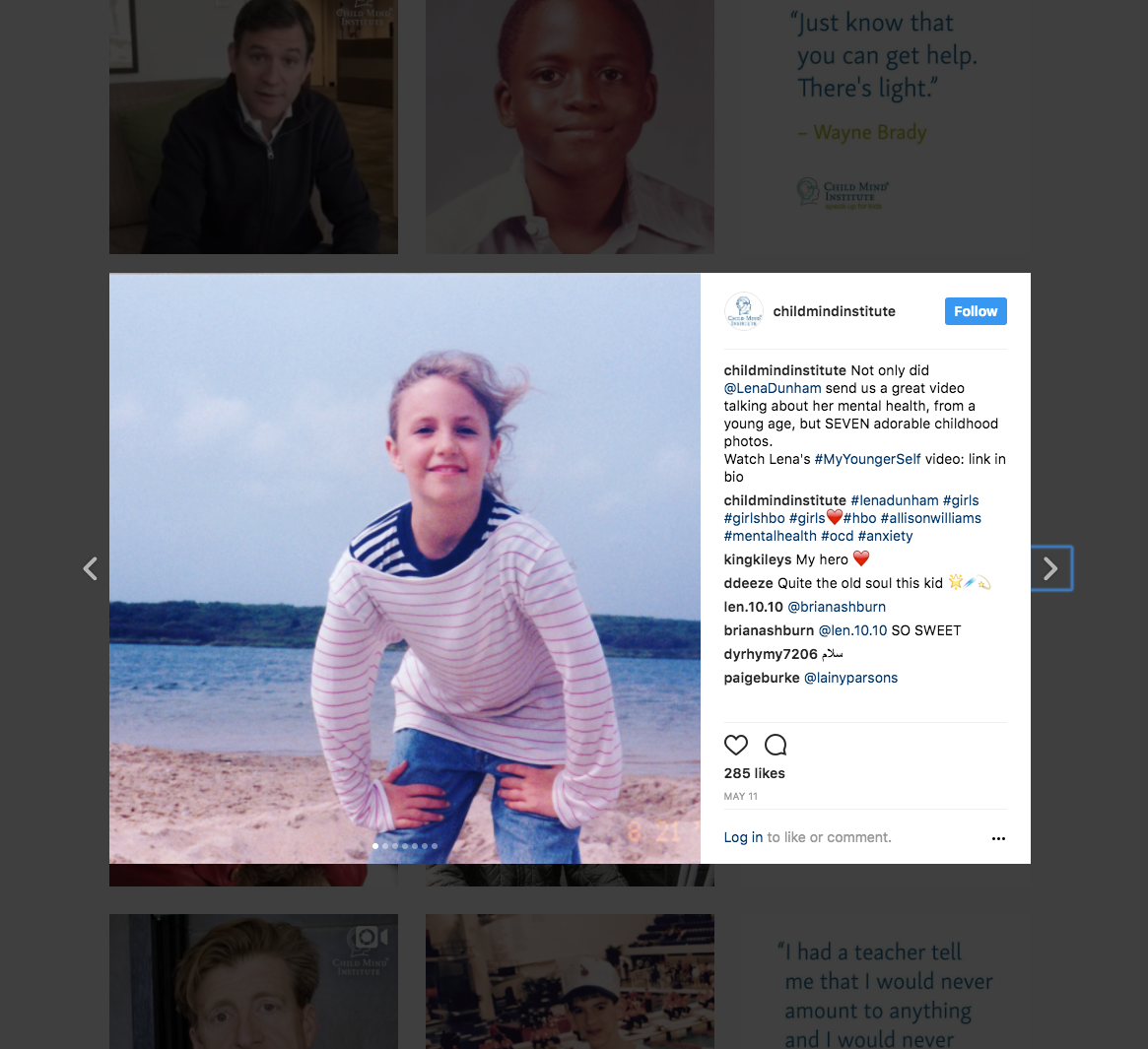 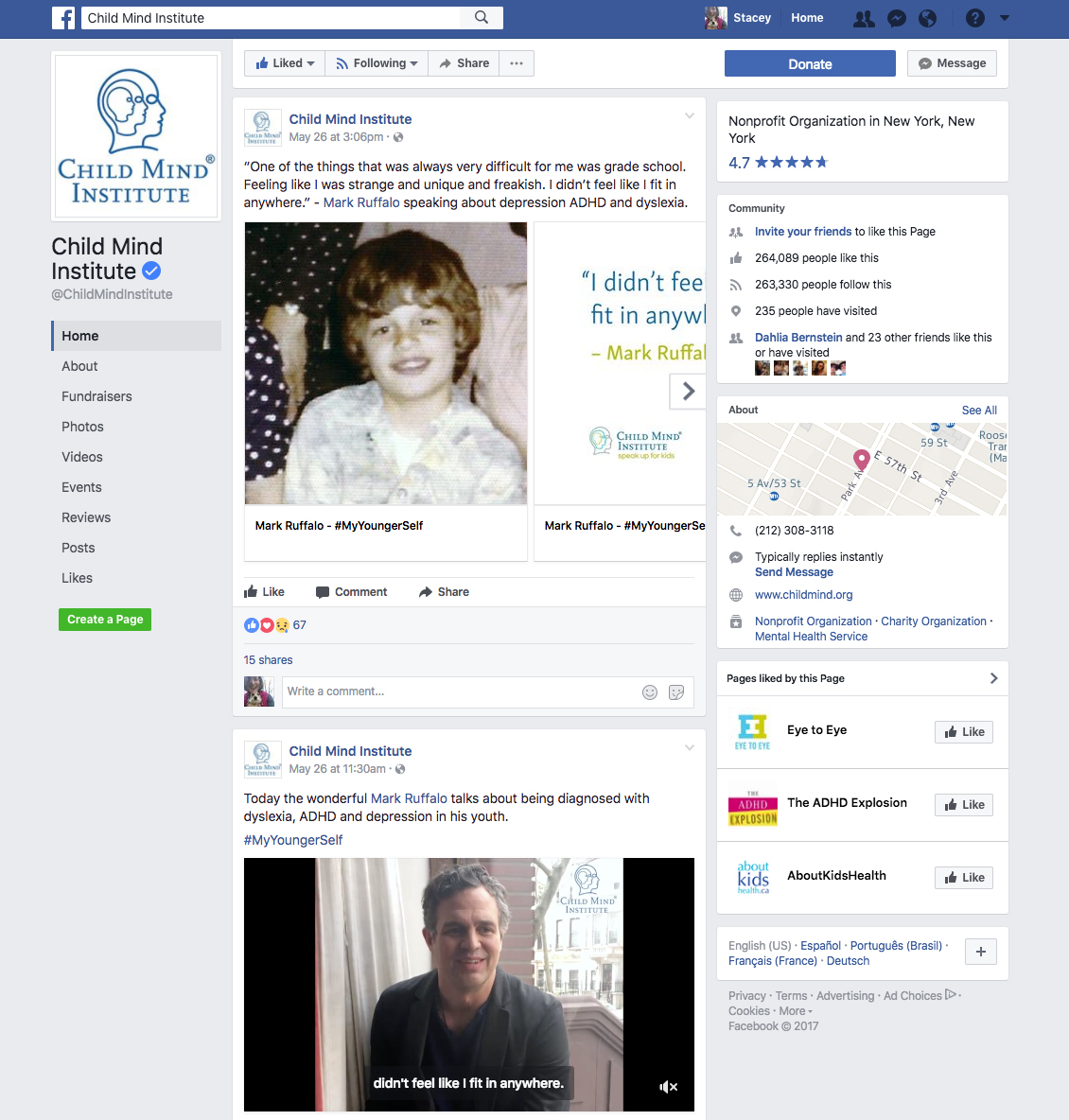 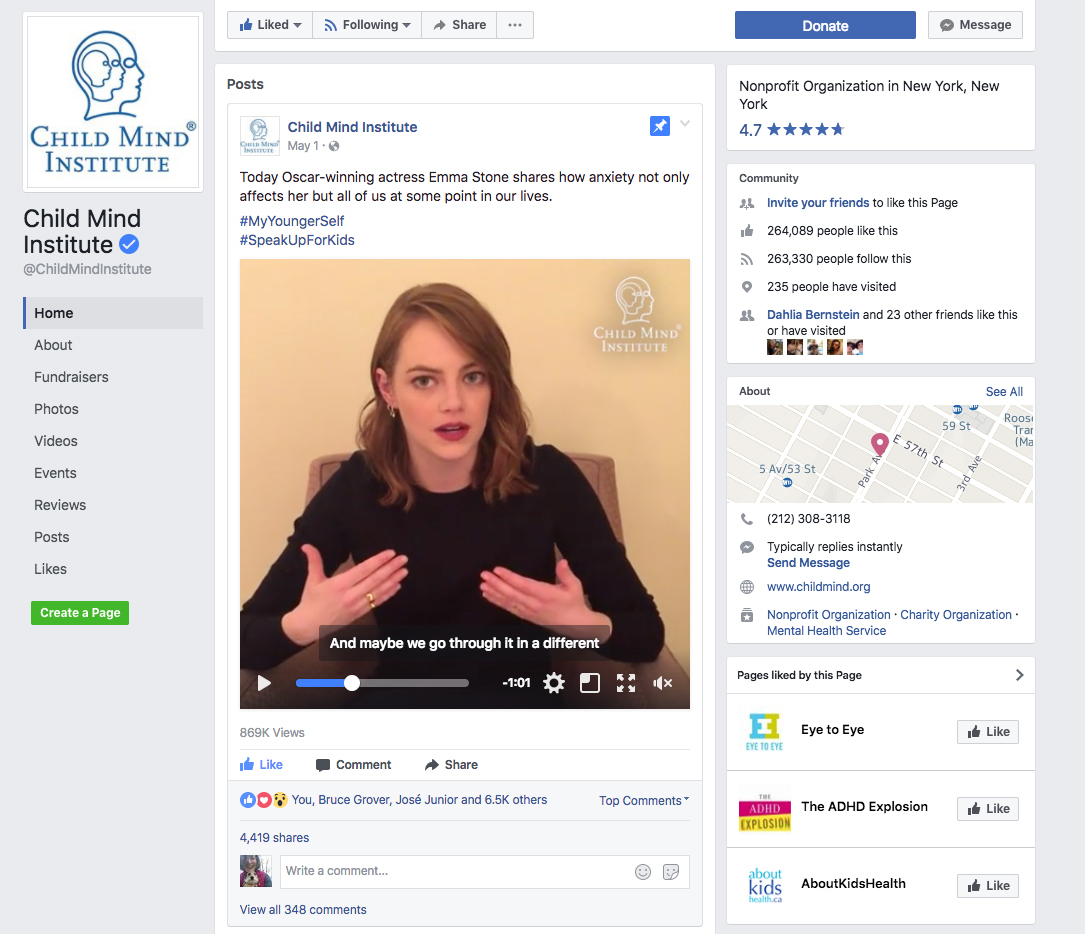 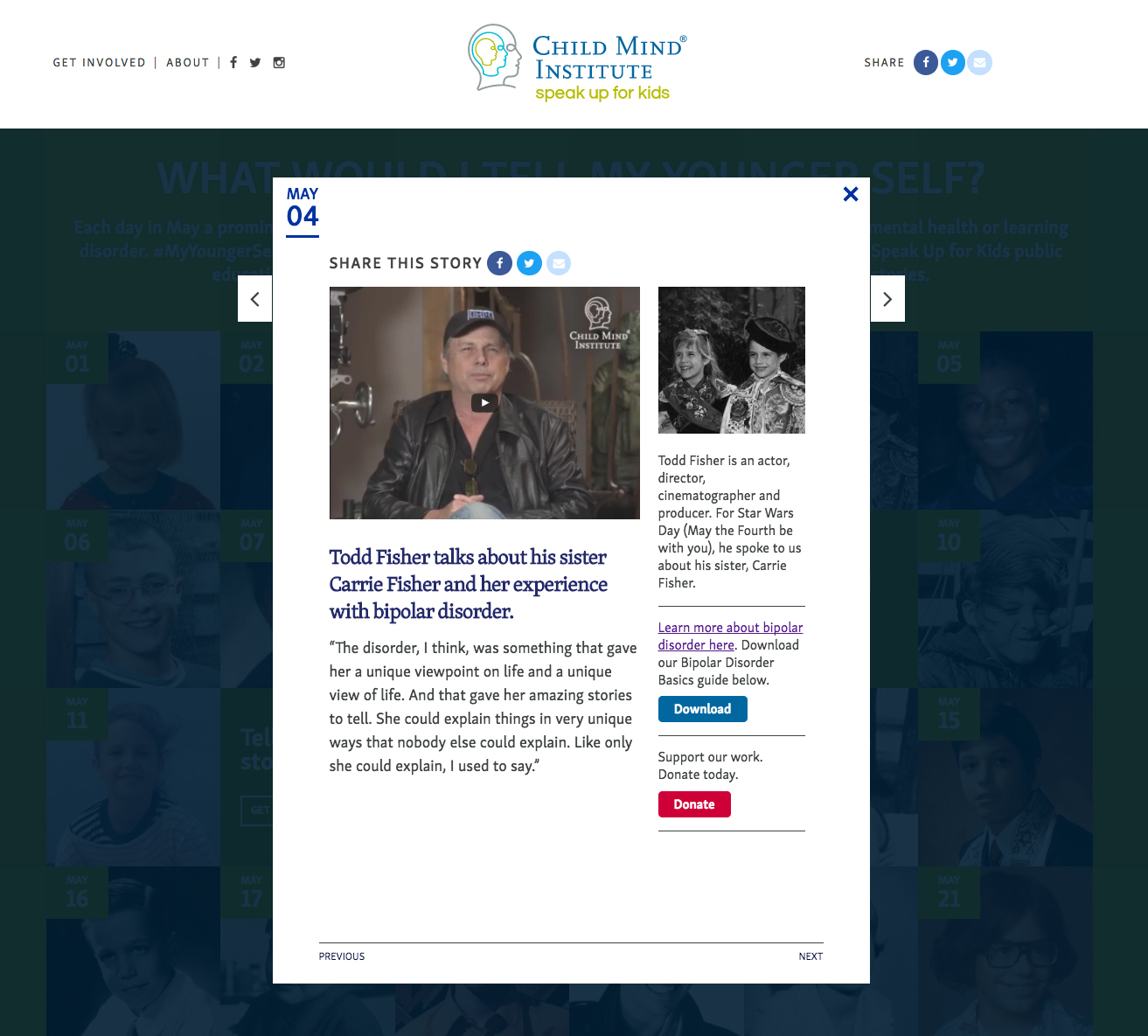 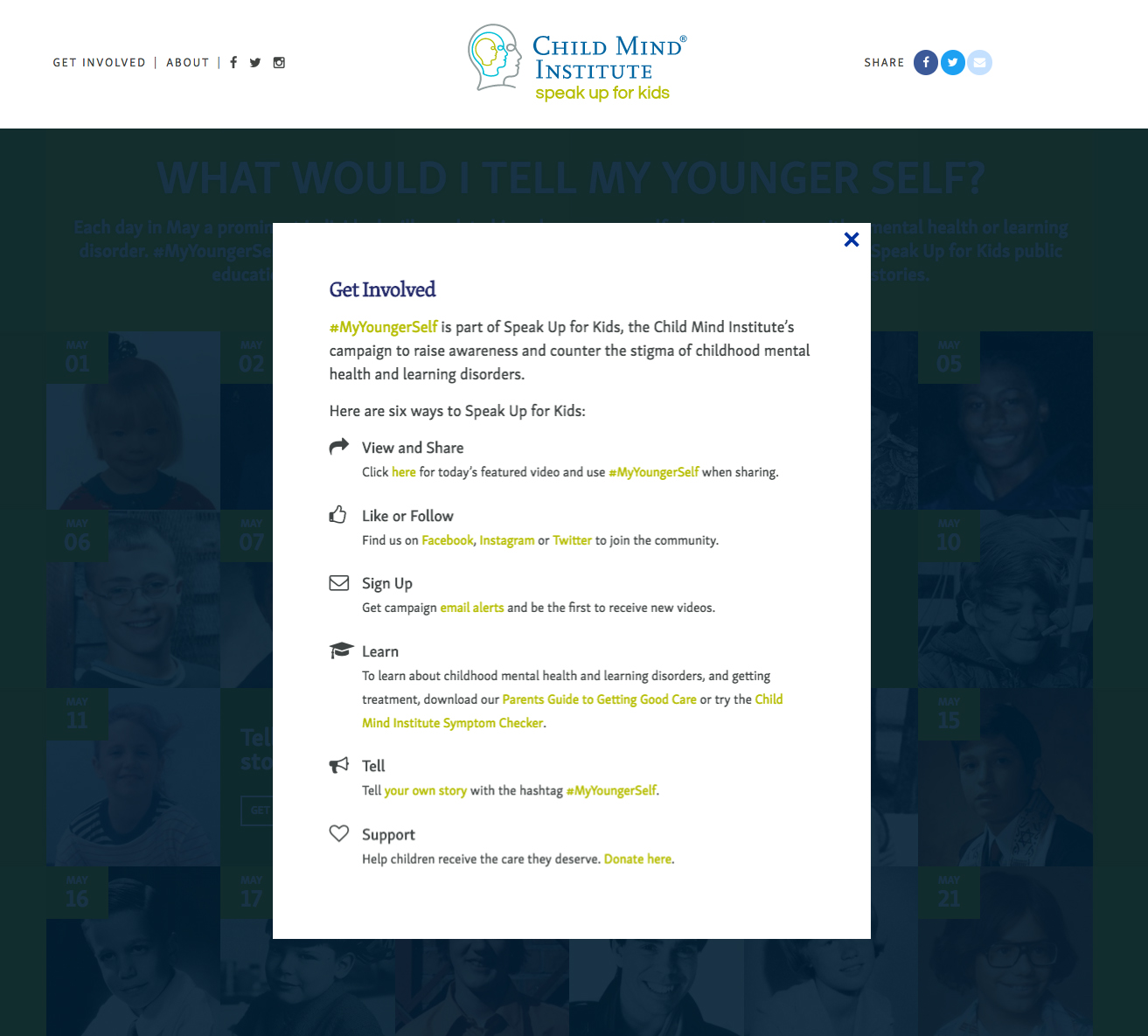 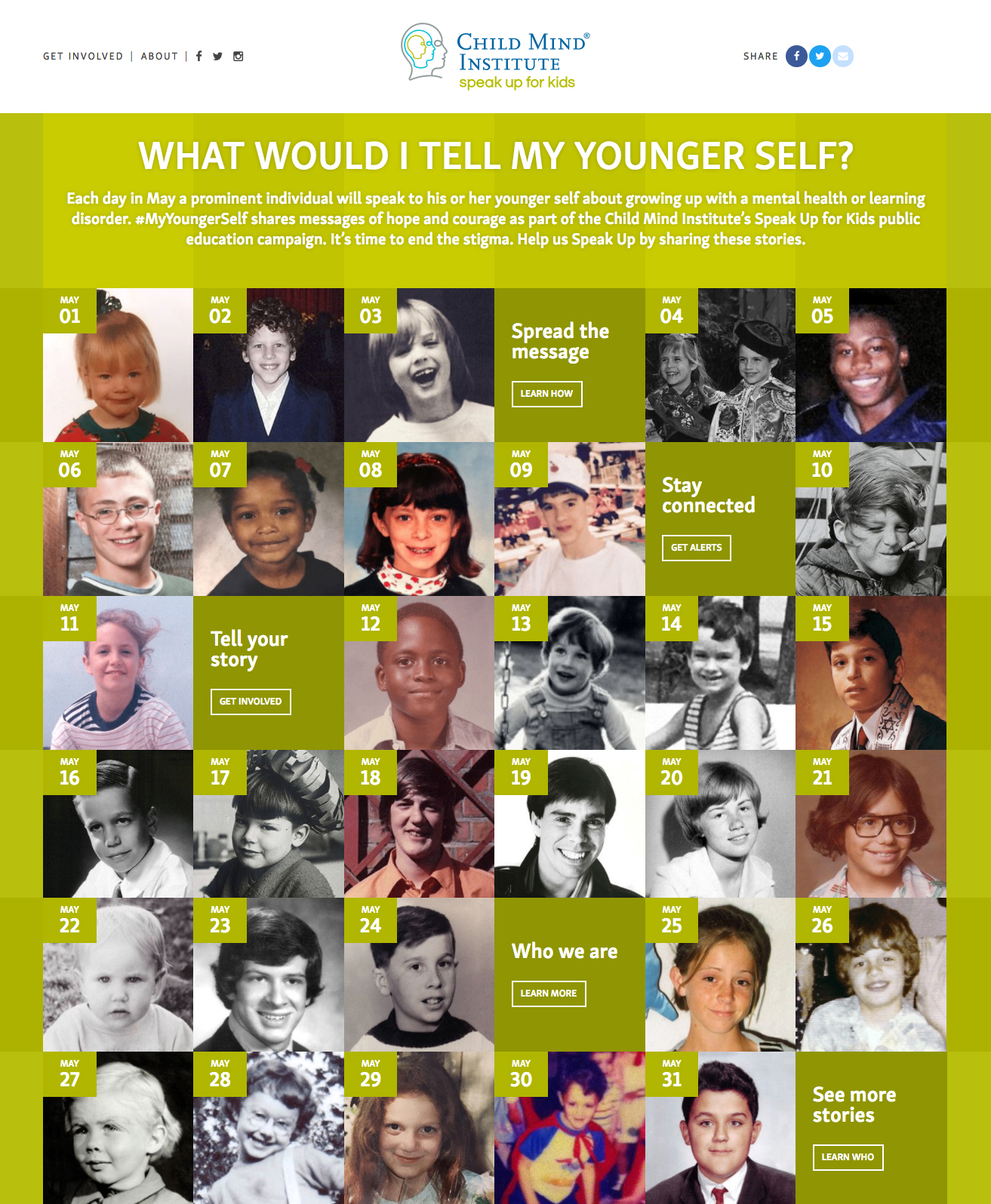