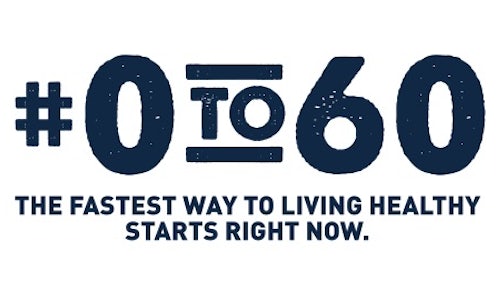 In May 2016, the National Fitness Foundation, in partnership with the President's Council on Fitness, Sports and Nutrition, announced the national public awareness campaign, #0to60. The #0to60 campaign was launched to commemorate the rich 60-year history of the President's Council and to inspire Americans to accelerate their journey to leading a healthy, active lifestyle. Considering that our nation's physical activity rate has drastically dropped over the past generations and fewer than 8 percent of U.S. adolescents are meeting the national physical activity guidelines, the President's Council and the Foundation, along with innovative partners, came together to create a campaign that could make fitness fun and accessible for all Americans, and ultimately, instill in them the ability, confidence and desire to pursue lifelong fitness.

As the official nonprofit of the President's Council, the National Fitness Foundation was established in 2010 to support the priorities of the Council and engage the private sector in health and wellness initiatives. In alignment with this role and to chart the nation's journey to living healthy, the Foundation's objective for the campaign was to utilize its unique assets to bring together partners to drive awareness, deepen engagement, and increase support for more physical activity, sports participation, and good nutrition across the country.

Background: The name for the campaign, #0to60, originated from the commemoration of the President's Council on Fitness, Sports and Nutrition 60th anniversary and the Centers for Disease Control & Prevention (CDC) recommendation for 60 minutes of daily physical activity. The tagline of the campaign, "The Fastest Way to Living Healthy Starts Now," represents the urgency for all Americans to adopt a healthy lifestyle and encourages partners to actively support the campaign's key features and initiatives.

Launch phase: The President's Council and the National Fitness Foundation launched the #0to60 campaign during an annual meeting in May 2016. The meeting was held in May to recognize National Physical Fitness & Sports Month and a reception was held to celebrate the 60th anniversary of the Council. The event previewed the campaign in front of key national stakeholders and brought together current and former members of the Council, as well as leaders in the health and fitness sectors. In conjunction with the reception launch event, the campaign was announced through shared press releases and a comprehensive partner guide for committed partners to have an overview of the campaign, key messaging, logos, and digital assets.

Implementation & Key Features: Digital and social media integration, as well as media and influencer engagement, helped to successfully implement #0to60 and inspire Americans nationwide. Digital and social media integration was supported by the #0to60 website, a mobile-ready website that featured rich content provided by the nation's leaders in physical activity and nutrition. It provided tips and resources to show Americans of all ages, backgrounds, and abilities various ways to integrate regular physical activity and good nutrition into their everyday lives. The website was accessible on any desktop, laptop, or mobile-ready device. In addition, the #0to60 app complemented the website by being an additional source for inspiration and organizing tips from physical activity and nutrition experts. It was available for download from the App Store for all iOS and Android devices.

A key feature of the #0to60 campaign was engagement with notable influencers both within and outside of the health and fitness industry. In partnership with Funny Or Die and SS+K, a "History of Exercise," video was produced featuring the First Lady and comedic actor Nick Offerman. The video showcases the evolution of the fitness industry over the last six decades and underscores the fact that, while exercise routines may have changed over the years, the importance of adopting healthy lifestyles has remained the same. In addition, the Foundation teamed up with Multi-Platinum and Grammy nominated recording artist Jordin Sparks to release "#0to60," the anthem song of the campaign. The Foundation partnered with Hip-Hop Public Health to produce the song, and the American Idol winning Sparks was joined on the track by hip-hop pioneer, Doug E. Fresh, and Grammy nominated children's artist, Brady Rymer.

By creating an accessible and engaging digital platform, the #0to60 campaign was able to create a social space for private and public sector partners to collaborate on health and wellness initiatives. Through the #0to60 website, app and blog series, partner organizations contributed a plethora of resources to help people adopt a healthy lifestyle. Over a 10-month period, 28 blogs were published, including links to resources such as the U.S. Department of Agriculture's "MyPlate, MyWins Video Series," the American Heart Association's Play 60 Challenge, and the American Council on Exercise's "5 Tips to Overcome Fitness Excuses." The campaign was able to expose Americans of all backgrounds to the benefits of healthy living, with over 1 million people visiting the #0to60 campaign website.

In regards to driving awareness for healthy living on a national scale, the #0to60 campaign reached over 300 million people and garnered over 10,000 social media mentions. The campaign was covered by major news outlets, such as USA Today, TIME, Good Morning America, and Fast Company. The History of Exercise video was viewed over 1 million times and the #0to60 anthem song premiered with People magazine as an exclusive first listen. In addition, the song was launched in conjunction with the 2016 "Hometown Grants" program, a partnership between the NFL, Fuel Up to Play 60 and the National Fitness Foundation that provides grants to support physical activity and nutrition programs in school districts in all 32 NFL markets.