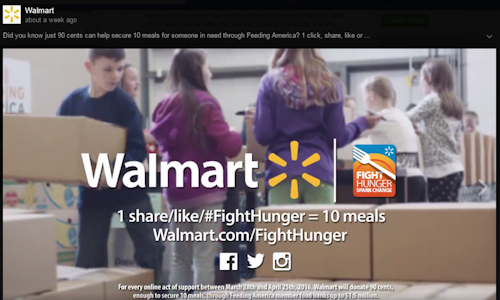 To raise awareness of the issue of hunger in America and help generate meals for those in need, Walmart wanted to create a campaign that got their customers involved in making a difference in a simple yet very impactful way. Walmart launched the "Fight Hunger. Spark Change." campaign, a nationwide initiative to encourage the public to join the fight against hunger.

Powered by Walmart, Feeding America, Telescope and Saatchi & Saatchi, the campaign encouraged the public to take action online and in-store to support the Feeding America network of food banks and the more than 46 million Americans it serves throughout the country.

In today's society where social media is a part of our everyday life, Walmart used it to great effect to reach and activate the public to take part through social actions. The campaign focused on digital platforms and provided multiple outlets for users to get involved between March 28th and April 25th. The solution was to seamlessly engage users to join the fight with everyday social actions across various social networks. These included:-

For every action Walmart donated $.90 cents, with a goal of $1.5 million.
($0.90 cents secured 10 meals through the Feeding America program)

Using Telescope's leading social marketing platform, every hashtag was counted across all three social platforms and results verified and aggregated to continually update the website counter which tracked the status of the campaign and money raised.

In addition to pledging donations via social media, Walmart collected data from in-store purchases and donations to be included on the website's counter. Users could also simply visit the Walmart website and "click" to help secure 10 meals.

Walmart exceeded their social and digital goals and raised $1,656,061 towards Feeding America through the campaign, raising just under 19 million meals for Feeding America and other food banks. The social engagement was substantial generating a viral effect across all social platforms.

"This campaign is a great example of our long-standing commitment to hunger relief and dedication to ensuring every family has access to affordable, healthier and sustainably grown food," said Kathleen McLaughlin, president of the Walmart Foundation and Chief Sustainability Officer for Walmart. "Successful partnerships are the key to making a positive impact on the issue of hunger in the U.S. and we're proud to once again work with Feeding America, the nation's leading organization dedicated to fighting hunger. Together with Feeding America, our suppliers and customers, we're working to generate the equivalent of 75 million meals that will make a real difference for families who are struggling with hunger." 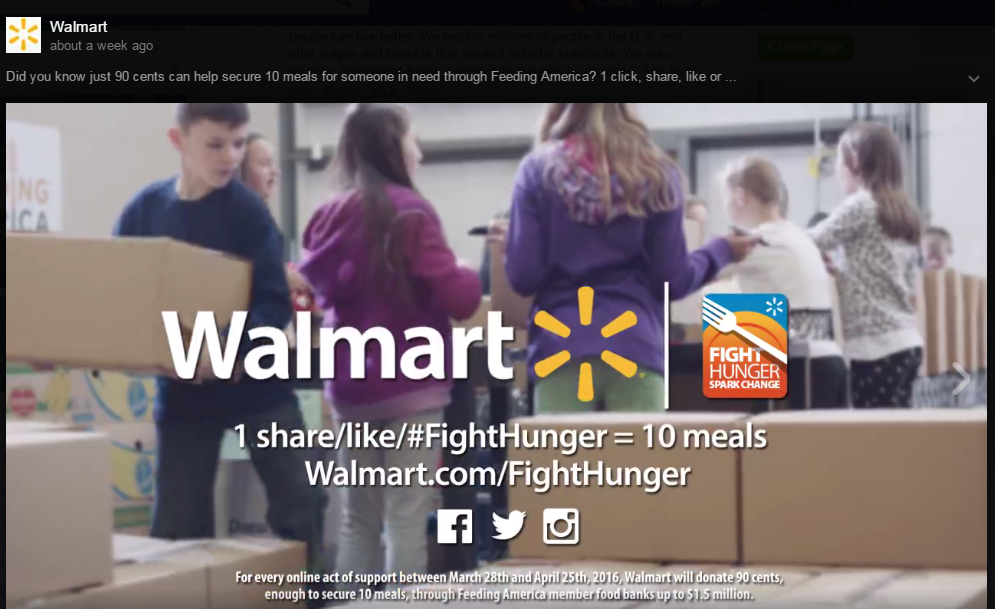