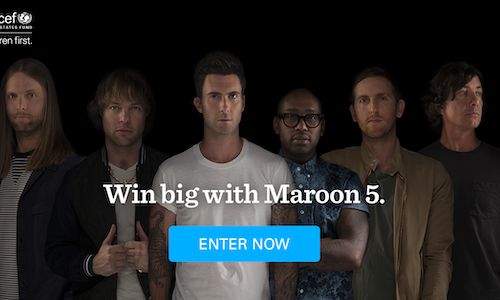 U.S. FUND FOR UNICEF AND MAROON 5 LAUNCH #MAROON5DAY TO SAVE AND IMPROVE THE LIVES OF CHILDREN

On June 25, 2016, Grammy Award-winning band Maroon 5 celebrated 14 years of the hugely popular album, Songs About Jane. Alongside the U.S. Fund for UNICEF (USF), the band set out to create an annual movement, #Maroon5Day, to celebrate the universal message of music and giving back.

The digital fundraising campaign showcased a partnership between Maroon 5 and UNICEF as an authentic voice for children to engage and inspire Maroon 5's fans, as well as UNICEF's supporter base. The campaign aimed to use Maroon 5's passion and commitment to their music and charitable endeavors to inspire others to help UNICEF save and improve the lives of the world's most vulnerable children. Messages included a call to action for fans to donate to UNICEF for a chance to win two VIP tickets to a Maroon 5 concert in the U.S. city of their choice through a digital fundraising campaign.

The U.S. Fund for UNICEF and Maroon 5 teamed up to celebrate music while giving back in a meaningful way. Like music, the campaign aspired to transcend borders and bring people together by drawing out a common sense of humanity. Ultimately, the goal was to leverage Maroon 5's celebrity influence, a grand prize incentive and the band's fundraising match to motivate current USF donors to donate while simultaneously engaging a new audience – Maroon 5's fan base. From Monday, June 20 through Saturday, June 25, fans and supporters were encouraged to make donations to the USF and share their stories about giving back on their social media channels, using the hashtags #Maroon5Day and #Childrenfirst. Ensuring both audiences were being reached, two parallel online fundraising campaigns were launched -one centering on the general public and Maroon 5 fans and the other targeted toward UNICEF's 2 million+ supports globally.

#Maroon5Day launched on Monday, June 20 via a press release issued through Marketwired. An exclusive story featuring a quote from Maroon 5 and the campaign video ran shortly thereafter on People.com, and on the same day, the campaign was promoted on USF and Maroon 5's social media platforms to over 50 million people around the world.

A co-branded landing experience showcasing both USF's brand and the band's personality was designed for the campaign on Crowdrise. The landing page was refreshed continually to reflect the campaign's cadence and was updated on Friday, June 24 to feature the band's $25,000 match offer in addition to the chance to win the two VIP tickets, creating a stronger call to action.

The campaign also utilized paid advertising on Facebook, Instagram and Gmail in addition to email appeals that were sent to UNICEF's existing supporters and donors, Maroon 5's recording company Interscope Records and the official Maroon 5 Fan Club. Email was the primary driver of the campaign's fundraising success, and messaging focused on why Maroon 5 supports UNICEF's work and the band's commitment to double each donation's impact and help twice as many children with a $25,000 matching gift.

By creating a holistic digital campaign, #Maroon5Day was able strengthen the connection between Maroon 5 and UNICEF's lifesaving work, bringing much needed attention to the issues facing the world's most vulnerable children. Including celebrities like Maroon 5 in creative components of a campaign is a crucial step to engage, activate and educate them as spokespeople, which in turn leads to credibility with the USF audience and the spokespeople's fans and amplifies UNICEF's brand across channels.

From Monday, June 20 through Saturday, June 25, fans and supporters donated a total of $32,176 to #Maroon5 Day. These donations coupled with a $25,000 matching gift by the band raised a grand total of $57,176—in less than one week— to help UNICEF provide children in need with health care and immunizations, clean water and sanitation, nutrition, education, emergency relief and more.

The press release was picked up by 93 media outlets, which translated into more than 316 million media impressions. The exclusive story on People.com was shared upwards of 35,000 times, resulting in more than 16 million impressions.

The campaign was also a huge success in terms of social media engagement. With a following of 39.5 million fans on Facebook, 13 million on Twitter and 3.8 million on Instagram, Maroon 5 posted dozens of times across all platforms. Band members Adam Levine, James Valentine and Jesse Carmichael posted on individual channels as well, further amplifying UNICEF's message.

Paid advertisements on Facebook and Instagram were served 403,581 times to 240,233 different users, and email was the primary driver of the campaign's fundraising success, bringing in 70% of the total funds raised to benefit children around the world.

Video for U.S. FUND FOR UNICEF AND MAROON 5 LAUNCH #MAROON5DAY TO SAVE AND IMPROVE THE LIVES OF CHILDREN 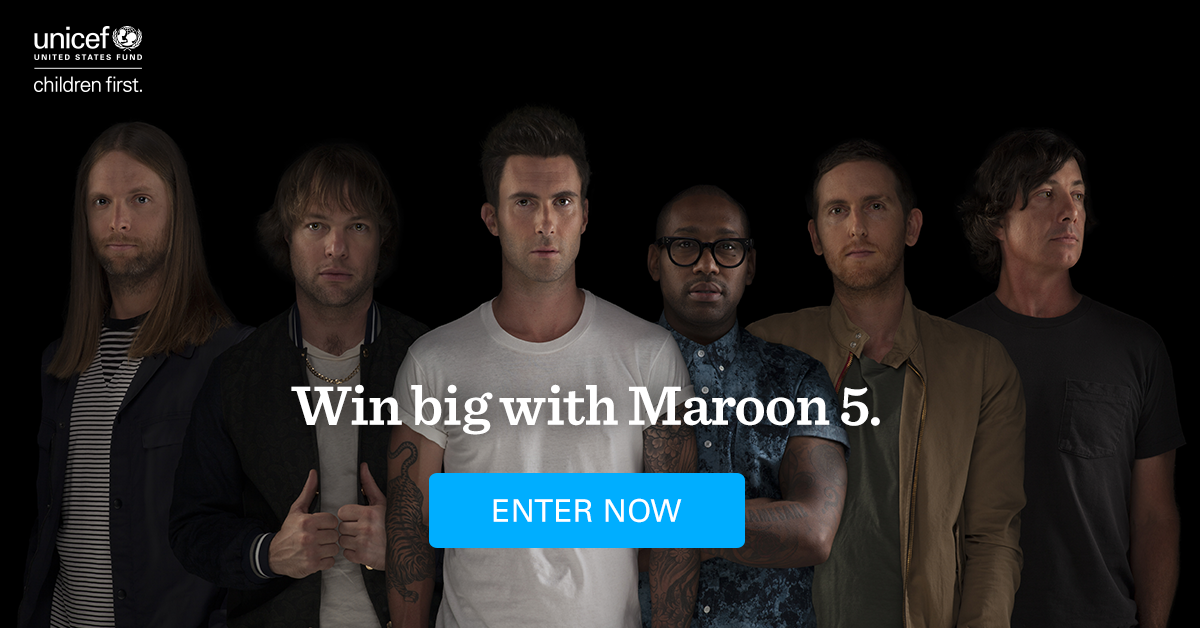 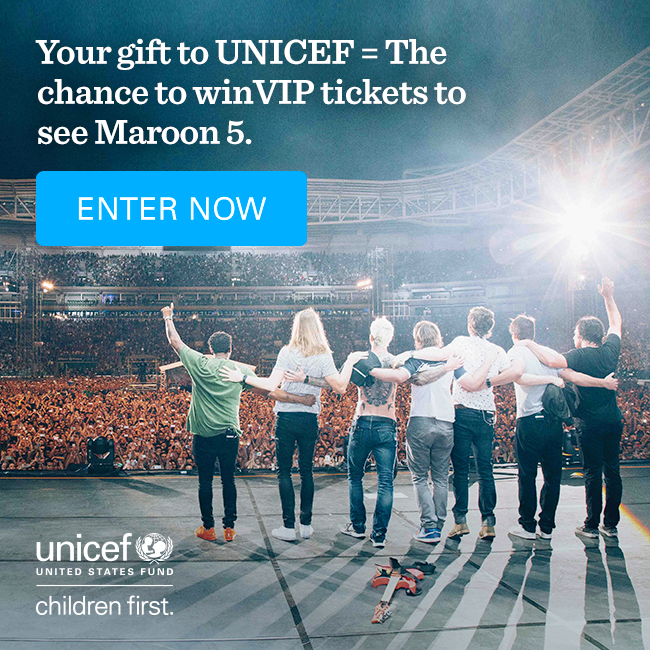 The U.S. Fund for UNICEF