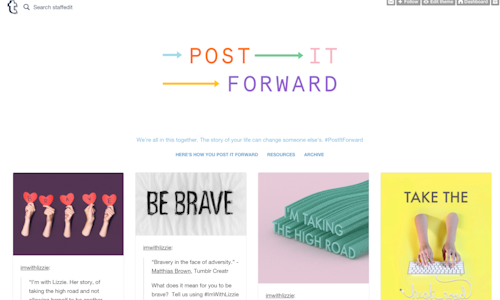 "Post It Forward" is a campaign to counter the stigmas around mental and emotional health through community-building and conversation. Our wish is to reinforce something Tumblr users had been doing on their own for years: strengthen the community's openness, kindness and support regarding issues that so many people, particularly young people, are facing today.

For a lot of people, social media platforms like Tumblr have been a safe haven for openly discussing bullying, self-harm, depression, and other issues that they struggle with in their lives. But too many people still suffer alone, unaware of the caring communities right on the other side of their screen. By creating a channel for people to share their personal stories and positive messages, we hope to turn the community into a support tool for those that may not have one in their daily lives.

PostItForward.Tumblr.com and the tag #PostItForward were created to serve as hubs for community building, support, and healing for those in need. Through these platforms, users can speak to their personal experiences, offer positive messages of encouragement, and raise awareness of organizations that have helped them throughout their journeys.

"Post It Forward" is, first and foremost, a user-powered campaign. Users are invited to share some piece of advice or positive message they learned (or wish someone had told them) that helped them through a tough time and could help someone else. Users can tell their story via video or long-form text, offer advice, share encouraging art, and connect with others through PostItForward.Tumblr.com or the tag #PostItForward.

At launch (May 2015), Tumblr provided a video prompt to celebrities who were recruited to participate in Post It Forward by sharing their stories and inspire the greater Tumblr communities to continue participating. Talent who have been outspoken advocates for like-minded causes have joined us; Pete Wentz, Brittany Snow, Vice President Joe Biden, Aija Mayrock, Elizabeth Banks, Geena Rocero, Jillian Mercado, among others.

Tumblr also continuously taps into its particularly creative and influential users, known as Creatrs, to make the "Post It Forward" mission come to live with vivid art and animations on postitforward.tumblr.com in support of various national/international mental health observances and other smaller campaigns within Post It Forward (i.e. Mental Health Awareness Month, GLSEN Day of Silence, Valentine's Day, Post It Forward's one year anniversary celebration). Tumblr also leveraged its Creatrs to package artwork and animations for limited-edition merchandise at time of campaign launch that was sold in the Tumblr merch store (www.tumblr.com/merch) with proceeds going to organizations, such as Love is Louder and The M.A.D. Girls, that tackle issues like self-harm and youth empowerment. To see the Creatrs art, please visit: (http://www.postitforward.tumblr.com/tagged/creatrs).

Tumblr also brought Post It Forward to life by recruiting the first ever Tumblr Corps of Crisis Text Line volunteers to enact another level of support for its community - answering a need even beyond the digital space in October 2015.

In August 2016, Post It Forward held its first-ever "Post It Forward Summit" at Tumblr HQ. At the Post It Forward Summit, we brought together the community and professionals in the mental and emotional health space for an interactive event that demonstrated the goals and accomplishments of Post It Forward in real life. We worked with like-minded partners and individuals -- including Refinery29, Love is Louder, The Trevor Project, It Gets Better Project, NAMI: National Alliance on Mental Illness and ThriveNYC -- to create conversational environments for sharing messages of positivity and offering tools for overcoming all obstacles from mental illness, to bullying, to day-to-day struggles with gender identity, sexuality, race and more. With over 100+ members of the Tumblr community present, the Post It Forward Summit was a safe environment for the community to continue to share their stories, share their messages and continue to "Post it Forward."

Since the launch of Post It Forward, we've seen tremendous engagement with PostItForward.tumblr.com and the tag #PostItForward not only on Tumblr, but also across leading platforms including Instagram, Twitter, and YouTube. Thousands of users have created original content and posts and shared it on Tumblr with the tag #PostItForward, including videos of personal struggle or stories, advice for others via long or short-form text, as well as illustrations and animations spreading positivity. Users also took part in our customized GIF tool to share personal messages.

Tumblr's Post It Forward showcases some benefits to the anonymity and sense of community the internet can provide. By demonstrating just how prevalent these issues are, through a tactical strategy that integrated newly launched Tumblr features including; the revamped video player, a native GIF maker, an editorial takeover of the largest Tumblr ad unit, blog customization tools, improved Search capabilities and an anti-harassment "Block" feature; we have seen this campaign turn Tumblr's community into a positive support tool for users who once may not have had one.

"Post It Forward" has victoriously become a platform that weaves together a wide range of issues and campaigns related to young people's mental and emotional health and shines a light on the ways online connection and community can provide support. 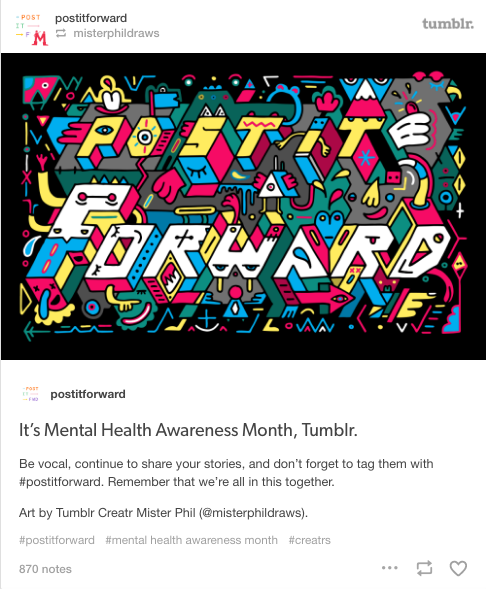 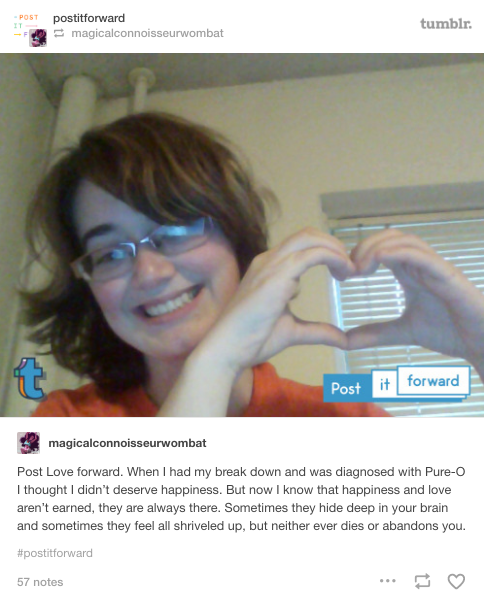 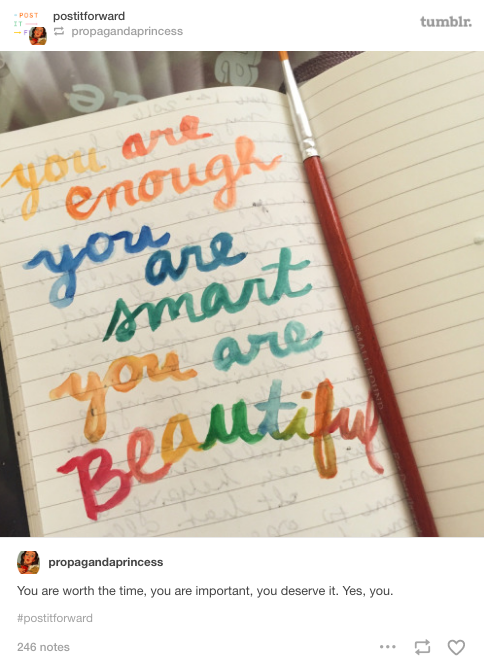 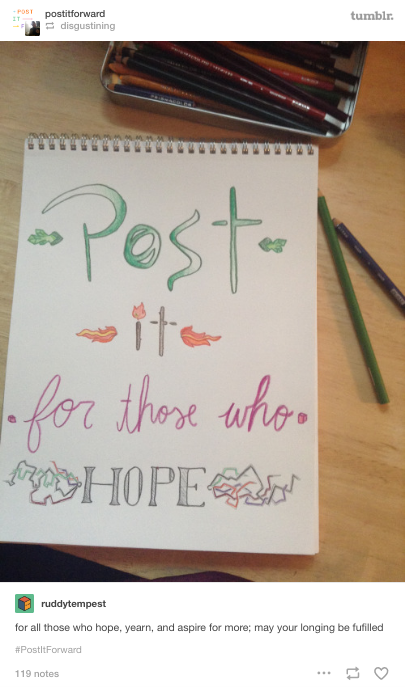 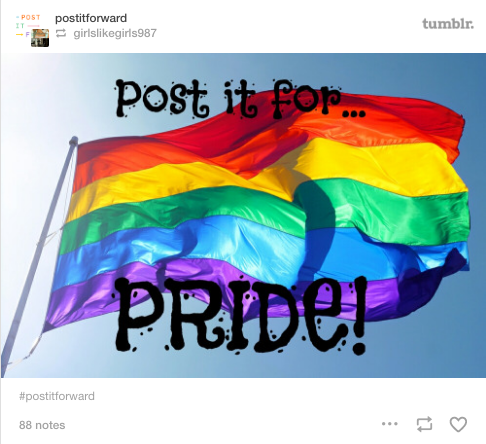 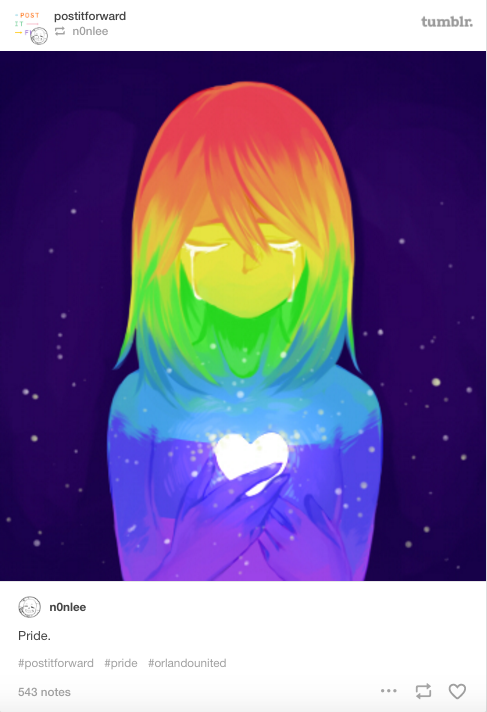 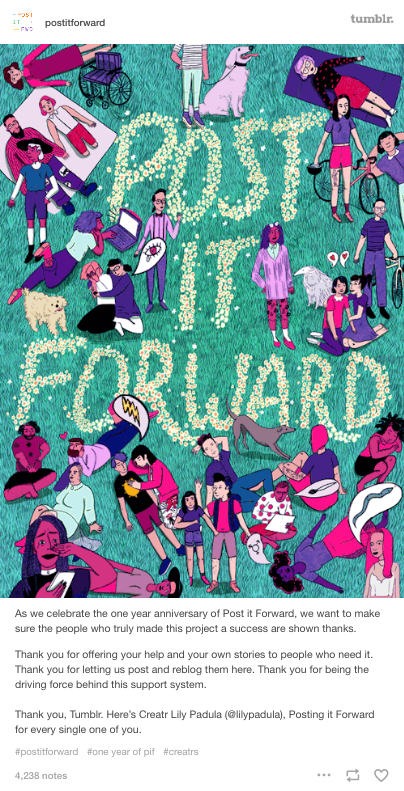 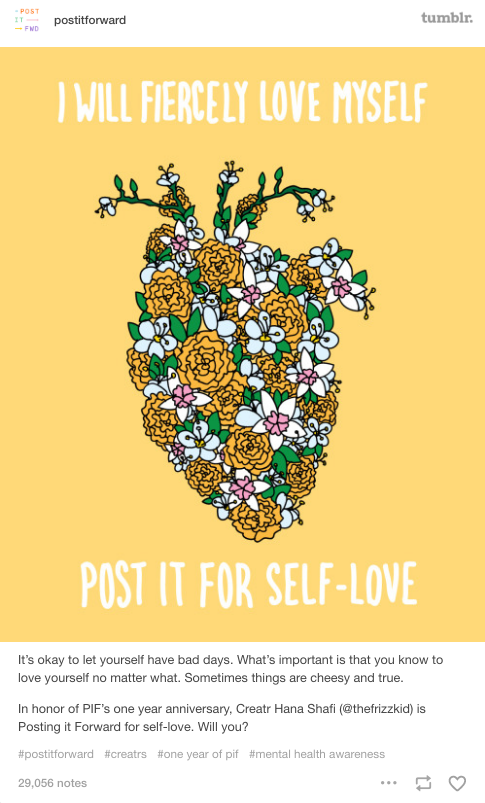 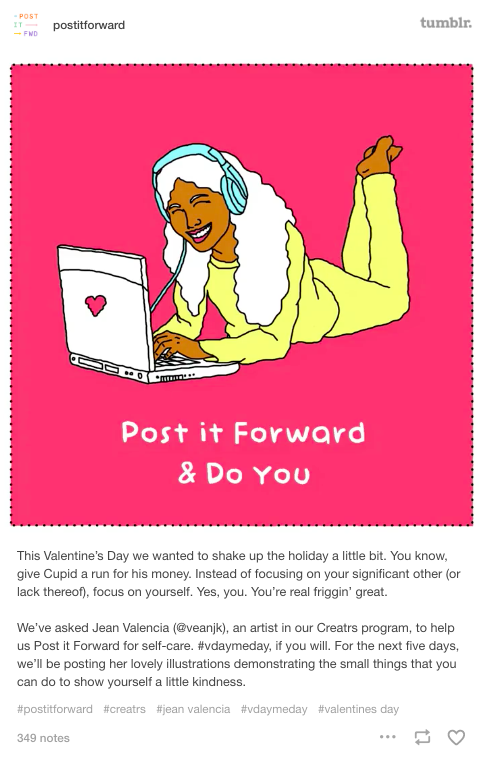 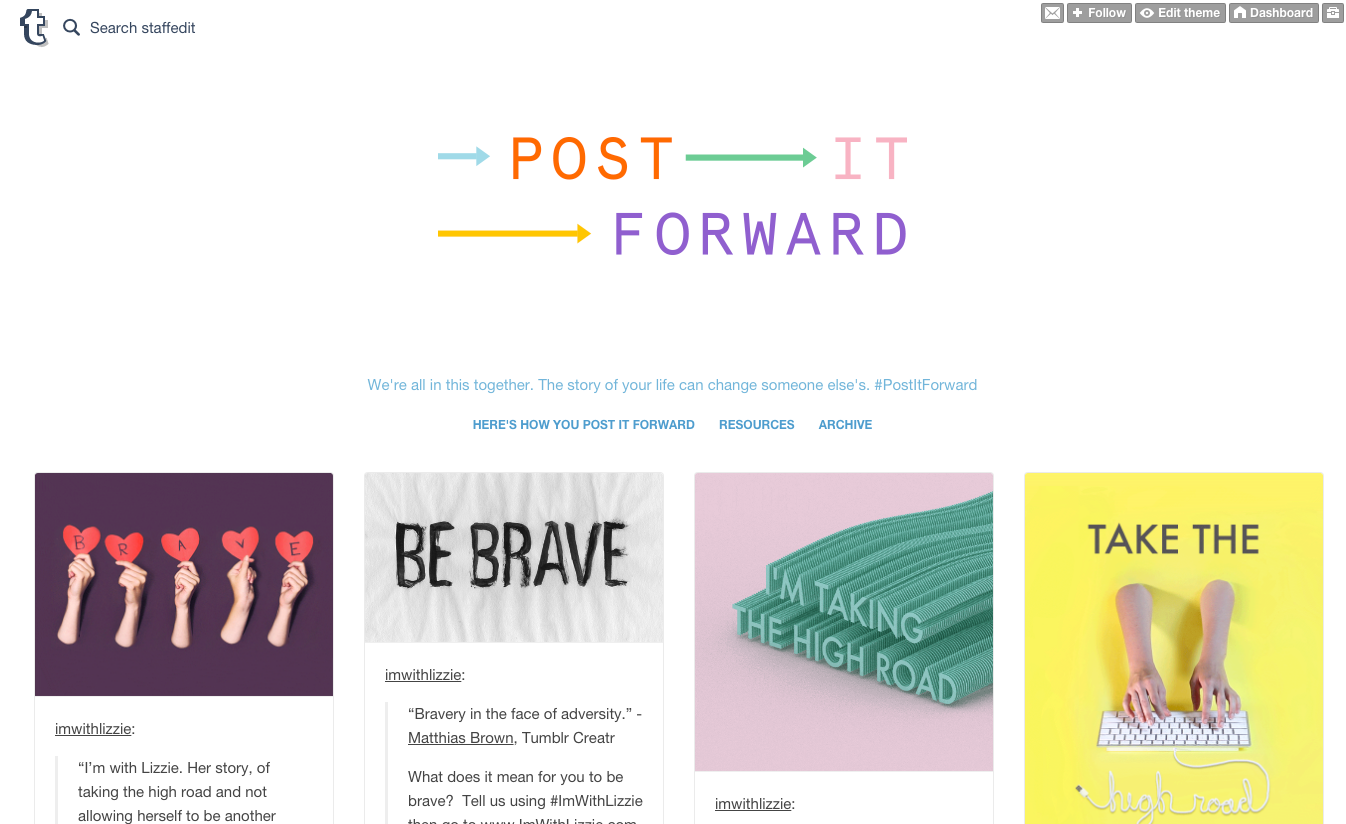 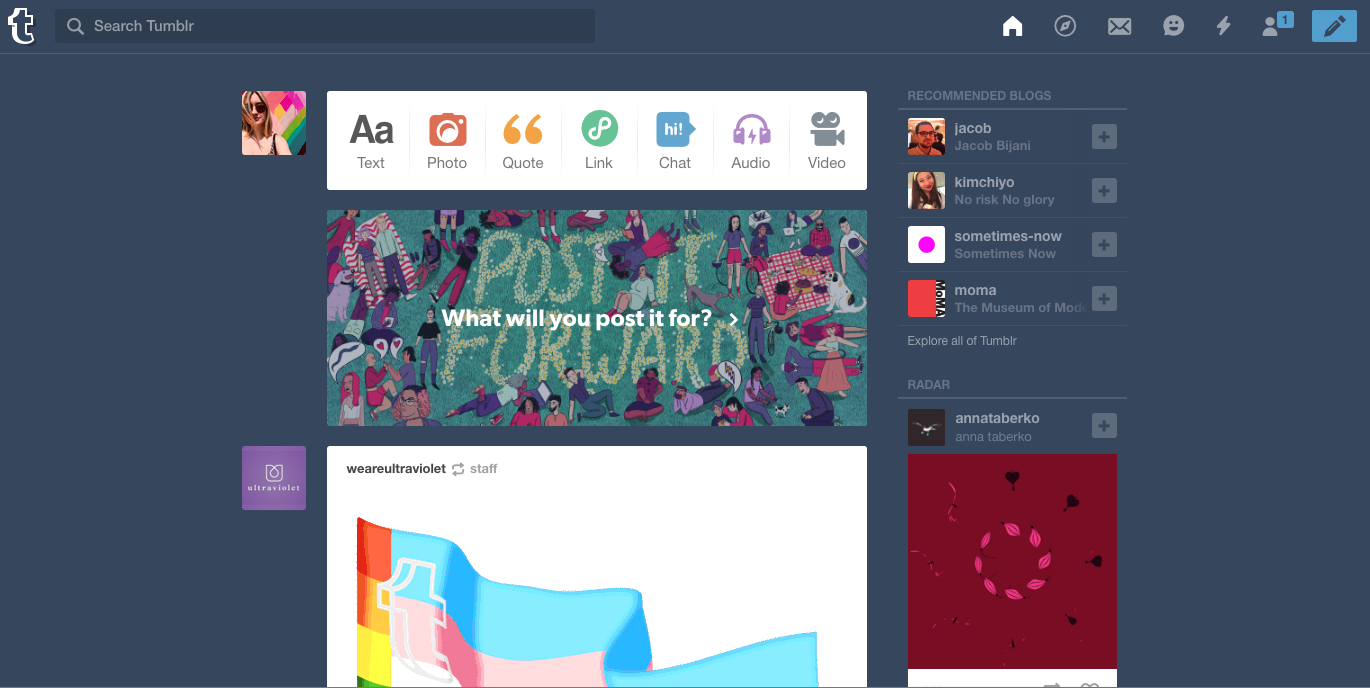 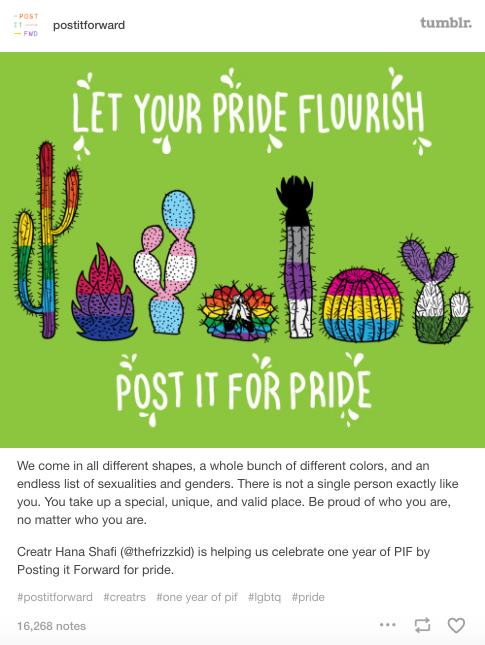