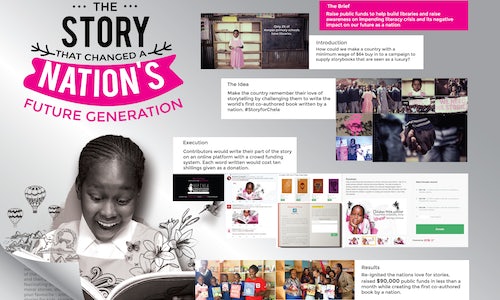 Kenya's future dreamers are under threat of disappearance as the literacy levels of children deteriorate. Only 2% of primary schools in Kenya have libraries, and the average pupil is semi-literate. The average class 2 child is unable to read English words while a class 7 one cannot read grade 3 books fluently.

Storybooks are core to a child's language development and thus their literacy. They are essential to the learning of new languages and enhancing creativity and imagination.With an education sector that has no recorded history of intensively rallying for leisure reading, this campaign needed to create nationwide awareness about the plight of our children. It required to raise the funds needed to build 100 libraries across the country while promoting the growth of a reading culture of storybooks by children.

The brief was to get Kenyans to value the impact of storybooks and donate funds to help build libraries. The campaign re-ignited a nation's love for story-telling, built libraries and put the country's name in history with the first book ever co-authored by a nation.

We had a microsite that hosted different sets of genres, where hundreds of contributors came together, to donate millions of shillings for Kenya's future. Each story would be developed by countless contributors in new unpredictable directions, transforming story-writing into a thrilling and exciting adventure for every person. All the stories would then be compiled in one book and the contributors' names printed at the back. We endeavoured not only make history but also anchor our nation as a united people.

Mobile money is a core means of transacting money in Kenya therefore we created a microsite that would allow contributors to easily give their part of the story and securely donate.

Each word was charged 10 shillings (10cts) to help fundraise money for the cause. Contributors were able to donate through a highly responsive and seamless microsite that would immediately confirm a successful transaction to the contributor online. The contributor would get a message and a social badge thereafter.

With an extremely limited budget we impacted thousands of children, raised over $90,000 that helped build 30 libraries.

Local county government officials, heads of public schools, parents and education related non-profit organizations came together to join the initiative with some making long term commitments to the cause.

We reached over 13.9 million impressions online from 3,600 Twitter mentions by 841 users with 97% of the interactions being positive sentiments of the brand and its cause. The public interacted highly with the digital advertisements leading to an impressive amount of site traffic

With information from start a library, one book will have been read by a minimum of 20 children in its lifespan. This meant that over 2,000,000 children would have access to printed physical storybooks and be impacted by this campaign.

The book is set to be published in next couple of months and will be distributed in all the libraries countrywide.

Video for Story for Chela 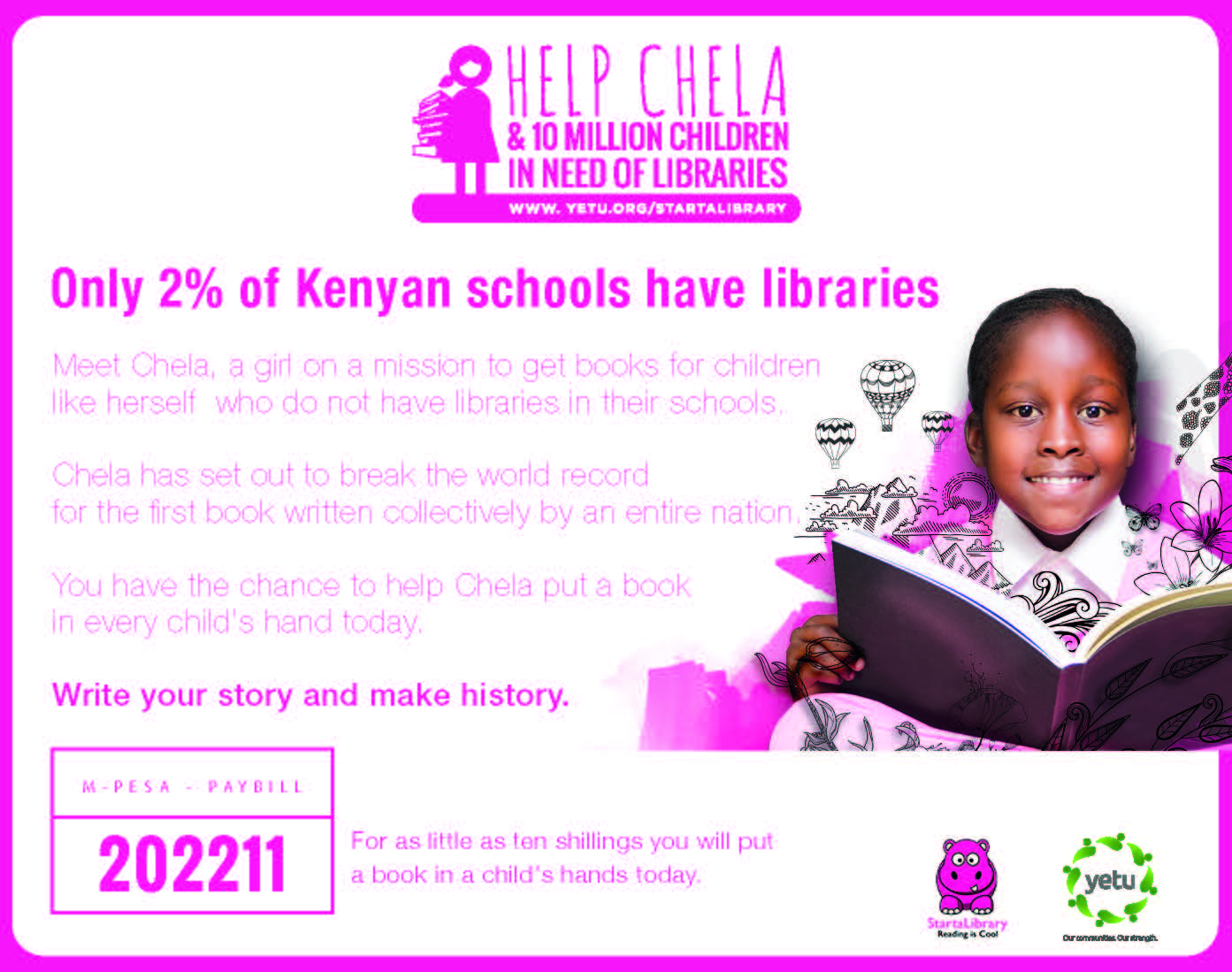 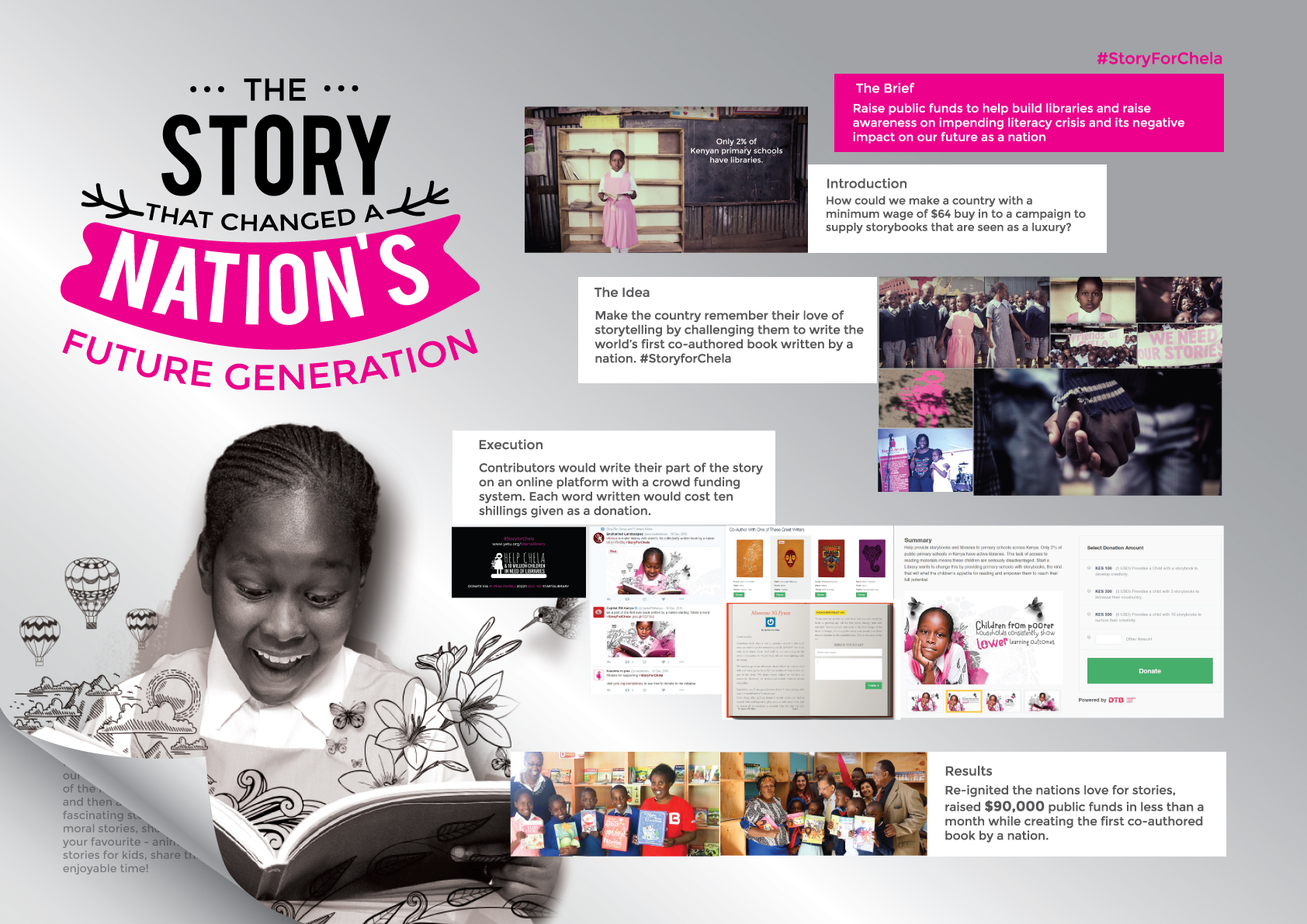 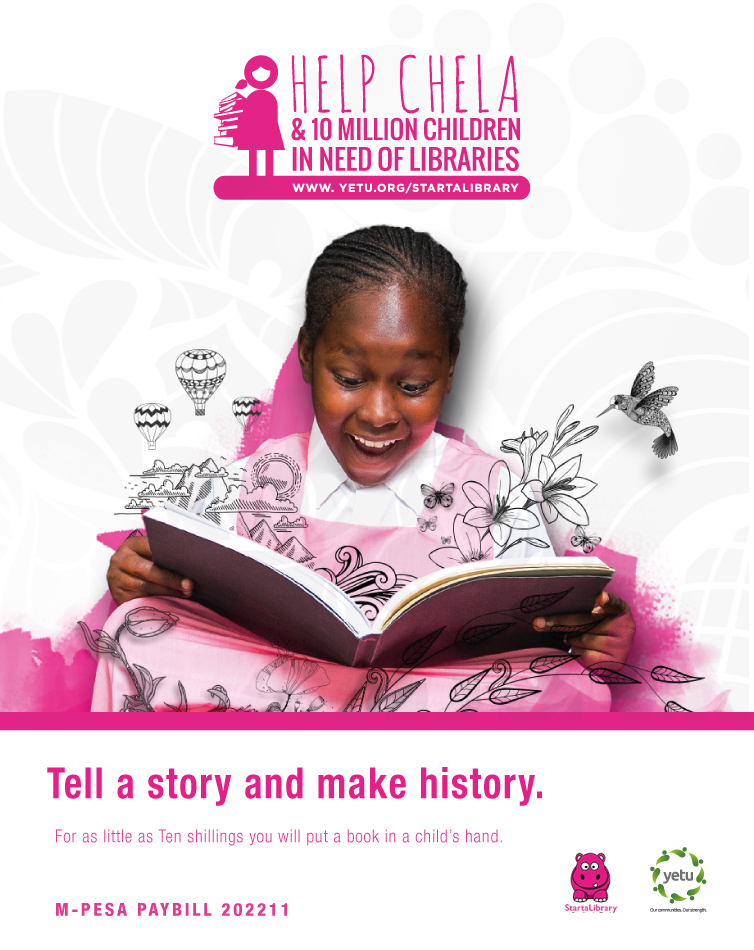