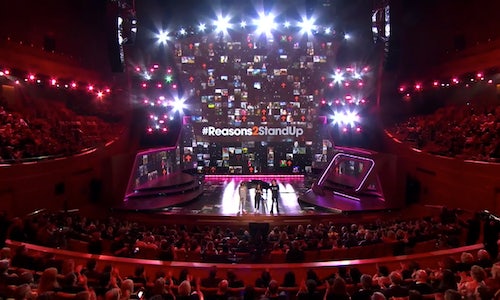 Stand Up To Cancer 2016 #Reasons2StandUp Campaign

Friday, September 9th, the entertainment community, social media audiences and viewers across the U.S. and Canada came together for a common cause, to Stand Up To Cancer. For its fifth biennial telecast, more than 60 broadcast and streaming entities carried SU2C's show live. Our goal was to highlight ALL of our supporters by featuring their #Reasons2StandUp.

Every person who stands up for a loved one, the future of scientific research, to build a generation free of cancer, is part of creating tangible momentum toward the end of cancer as we know it. The campaign's objective was to demonstrate how cancer connects us all.

Kicking off in mid-July 2016, #Reasons2StandUp launched a user-generated content social media campaign leading up to SU2C's telecast. SU2C invited the public, our corporate donor employee and customer bases, members of the entertainment, sports, and scientific research communities to share how cancer has impacted their lives. All were invited to post photos or videos on their social media channels. Whether a person's reason to stand up was for a friend, family member, or a personal experience, our goal was to show that we are all connected in the fight.

Our community empowered patients, survivors, and loved ones to keep fighting, and reaffirmed Stand Up To Cancer's mission to develop new treatments that reach patients faster. By encouraging everyone to share their #Reasons2StandUp, we were able to show the world why it's so important to stand together to support SU2C's groundbreaking research.

Reasons people engage in the fight against cancer are many, yet we unite in a common goal to end cancer. We offered the full community an easy mechanism to participate in the event experience. The mission of inclusion informed outreach, content selection, and call to action: We all have a reason to stand up. What's Yours?

Campaign kicked off at MLB's All Star Game in July. Launched with support of donors, Major League Baseball and MasterCard, campaign continued across summer culminating at live simulcast September 9th and "The Hub" on Facebook Live hosted by MSNBC Correspondent Jacob Soboroff.

Celebrity content was wrapped with SU2C graphics and provided to networks and talent to post to their platforms, extending campaign's reach.

Stage Screens + The Hub set featured thousands of social-submitted images, clips from public and celebrities which aired throughout the program, and scripted calls to action delivered by celebrities encouraging audiences to post their #Reasons2StandUp.

Stand Up To Cancer raised over $111,000,000 in pledged donations in connection with the show and social media and garnered press coverage of over 1.8 billion earned media impressions.

The hashtag #Reasons2StandUp garnered over 460,000,000 impressions across all social media platforms.

The Fine Brothers – Teens React To Stand Up To Cancer

Video for Stand Up To Cancer 2016 #Reasons2StandUp Campaign 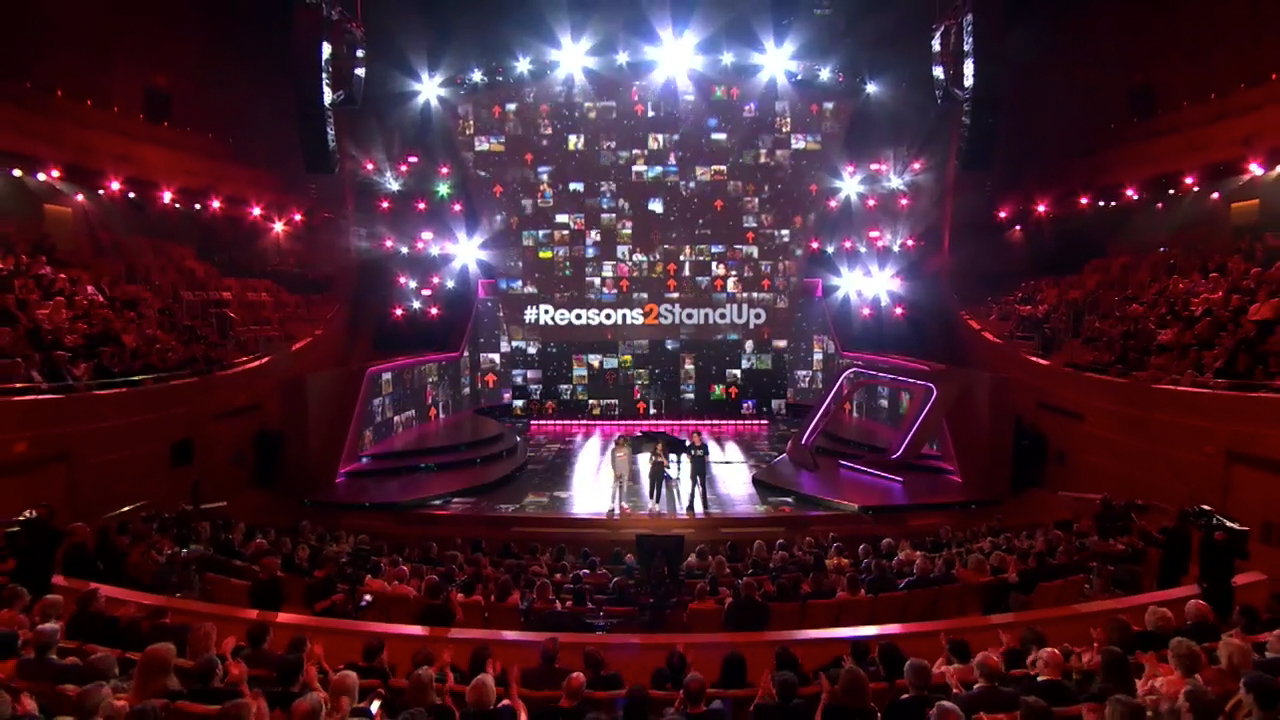 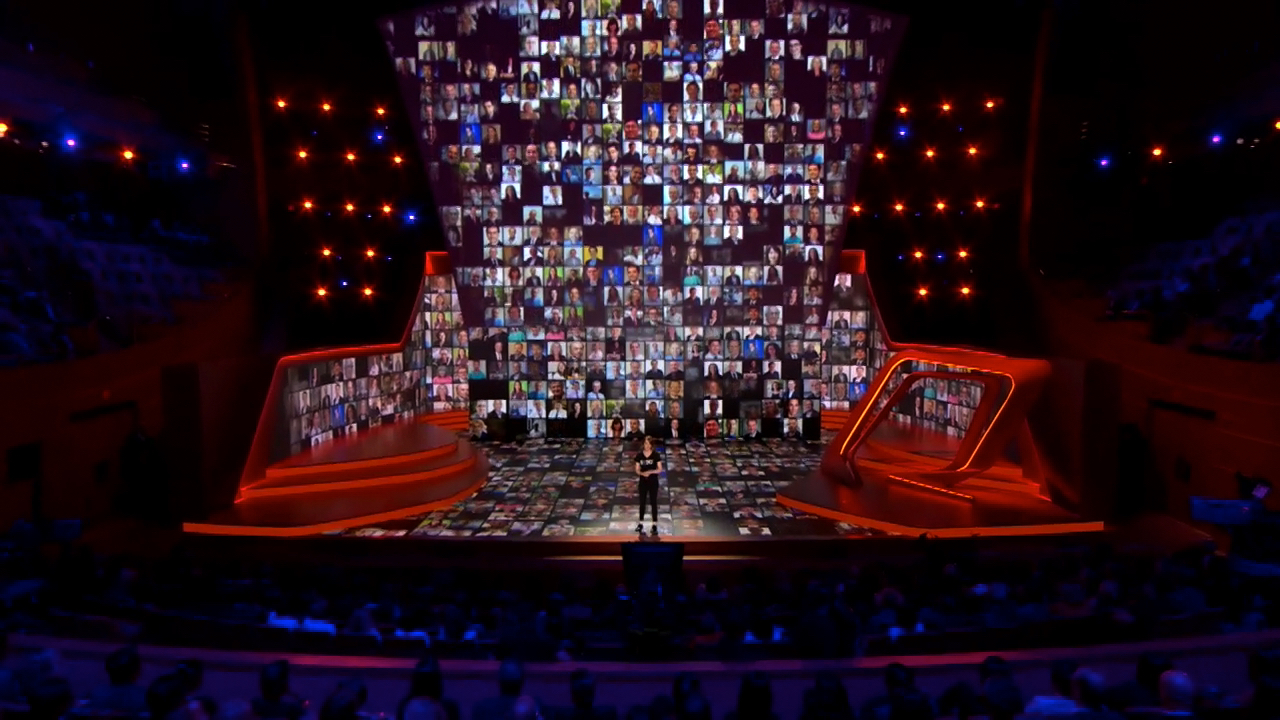 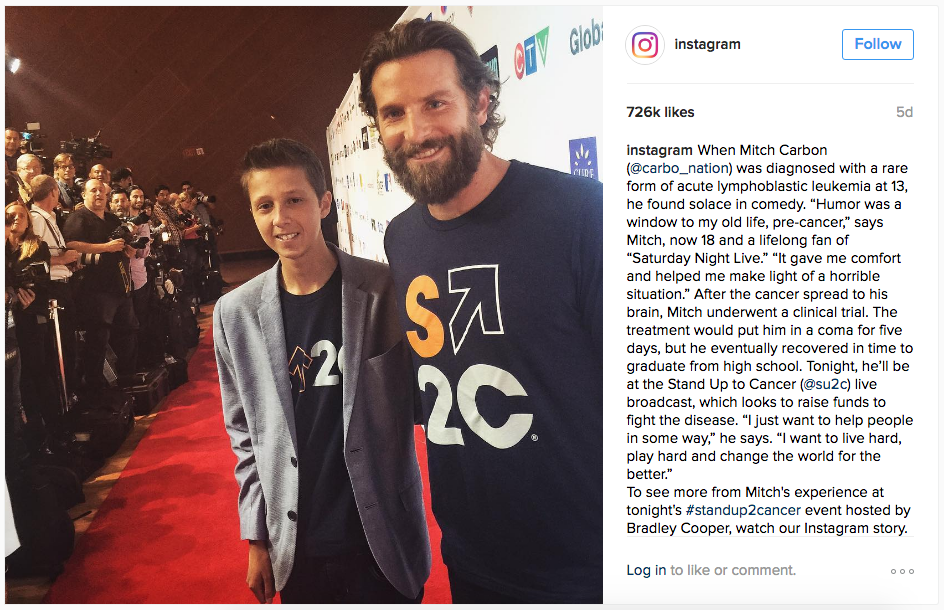