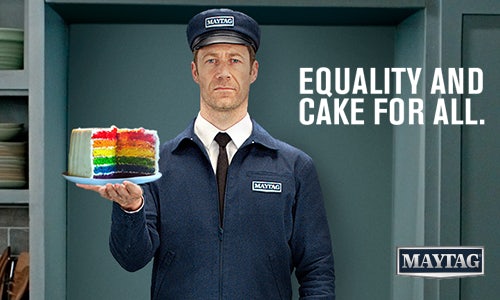 When marriage equality became a law in the United States, bakers across the country began refusing to make wedding cakes for same-sex marriages. This trend of discrimination was widely reported in news media, but no brands were speaking about it in social media.

So, as a brand that proudly believes in dependability for all, Maytag thought this was an opportunity to step up and make a poignant statement on the issue that would reflect the brand's values.

The post showed the Maytag Man holding a layered cake featuring the colors of the Gay Pride rainbow. Staying true to character, he was depicted as an appliance (a refrigerator) simply doing his job, free of judgment.

The accompanying headline read "Equality and Cake For All."

And the post read, "Proud to be in any home."

We ran the post when bakery discrimination was on the rise, which coincided with Gay Pride month in America, when the topic of equality would be most relevant in social media. Originally, the post ran with no media support, but as we noticed it immediately getting good engagement, we began putting paid support behind it.

Additionally at this time, America was enthralled by the story of celebrity Caitlin Jenner announcing herself as transgender. So when we began supporting the post with paid media, we used highly targeted search terms like "Caitlyn Jenner" to get our post in front of an audience with whom it would resonate most.

Social chatter about Maytag went from a negative majority to over 90% positive.

And many online news and media outlets featured the Maytag post on their sites, earning countless additional impressions. 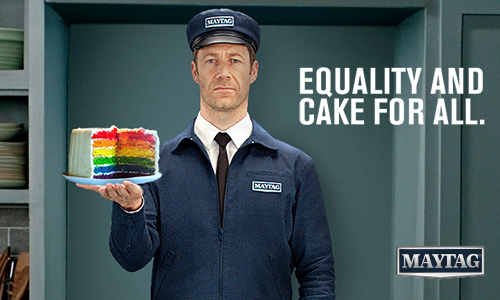