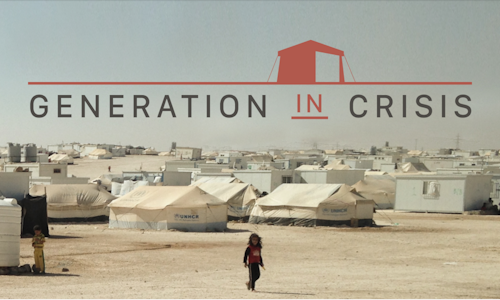 Our goal for "Generation in Crisis" was to begin a conversation about the worldwide refugee crisis and how it affects everyday Americans. We spent months brainstorming innovative ways to achieve this goal. At the time, U.S. media coverage on this issue was very minimal. However, we knew it needed to be highlighted and, therefore, we wanted to be ahead of the curve. Additionally, we aimed to report on this issue in a way that would set us apart from traditional television networks. It was our goal to travel to various countries and hear firsthand from the people directly affected. Through extensive research, we chose Jordan, Rwanda, and El Salvador as the primary locations for production.

Fusion deserves your consideration for "Generation in Crisis" because our team focused on a complex issue through a unique lens – young people tasked with rebuilding their country. Throughout 2015, worldwide displacement dominated headlines. In "Generation in Crisis," Alicia Menendez tours the Zaatari Refugee Camp, which is only seven miles from the Syrian border and one of the most concentrated settlements of refugees in the world. We meet various women at Zaatari who are all coping with different realities and struggling to adapt to their new normal. Our story continues in Rwanda where, twenty years ago, a civil war led to the death of an estimated 800,000 people in 100 days. The Rwandan genocide and war in Syria have key similarities: both have been classified as civil wars, both led to widespread displacement and refugee status, and both have had a disproportionate effect on women and children. The situation in Africa and the Middle East is part of a global phenomenon. In 2014, around 70,000 children fled crime, gang threats, and deadly violence in Central America. We knew the story from the U.S. side of the border, but wanted to meet the generation in crisis on the other side. Our team travels to El Salvador to learn why it is one of the most dangerous countries in the world. Our story's supplemental microsite – complete with graphics, statistics, photos and video – extended the reach of this important reporting. "Generation in Crisis" features three dozen interviews from three continents in four different languages.

Our team was thrilled with the feedback received on "Generation in Crisis." Not only did Fusion report this story before it became the subject of national discourse in the U.S., but our one-hour television documentary also contextualized for our audience why this global issue is relevant to all Americans. We believe we achieved this by finding unique, compelling characters whose stories defy borders and bring relevance to a difficult yet crucial reality. Following the premiere of "Generation in Crisis," several media outlets (including The Huffington Post, AOL, MTV, and Comedy Central) took note of the report and commended the attention it brought to the worldwide refugee crisis. Following the release of our special, the United Nations issued a grant to Fusion to continue reporting on the plight of women and children as part of its Millennium Development Goals campaign. Since "Generation in Crisis" premiered on March 11, 2015, it has been screened for multiple theater audiences and was incorporated into the curriculum of New Jersey schools.

Video for Generation in Crisis